Pat Sesto, Greenwich’s Director of Environmental Affairs, addressed the RMA on Wednesday. It was the first in their speaker series: “Greenwich: What Does the Future Hold?”

Sesto started off by saying the forum was not one to debate climate change.

Instead she focused on how Greenwich should plan for rising sea levels and storm surge. 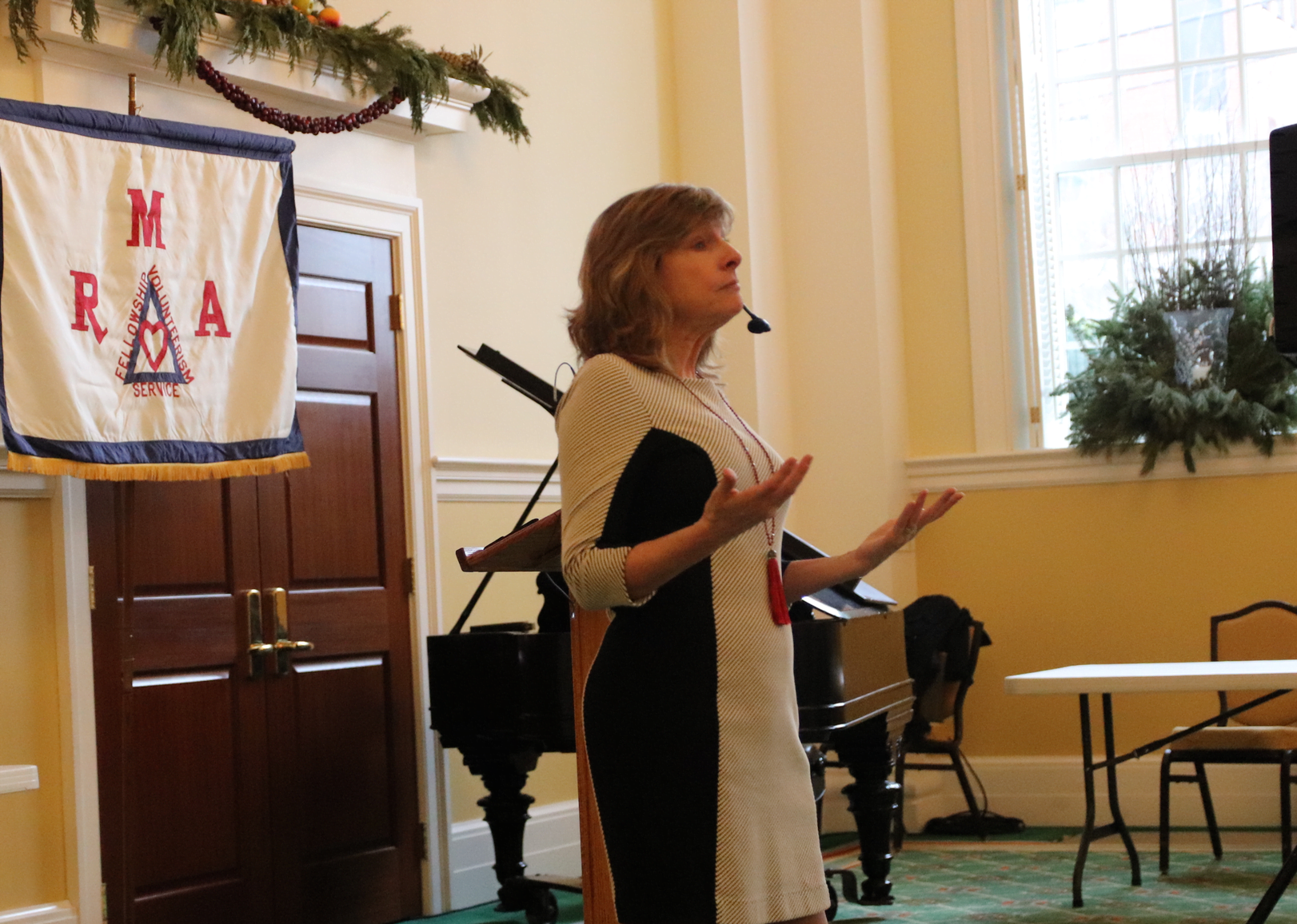 Sea level has risen 8-9 inches since 1880, with the last 3inches increase coming in the past 25 years. And in many locations along the US coastline, high-tide flooding is now between 300% and 900%+ more frequent than 50 years ago. (Source: NOAA).

“Also, people irrigate their lawns with fresh water and don’t irrigateur lawns with salt water for obvious reasons,” she added.

“Between 2000-2015 nuisance high tide flooding increased on average from 3.4 days a year to 6 days a year – that’s a pattern you can pay attention to. It has been said that the nuisance flooding of today will be high tide of tomorrow.” – Pat Sesto

“As our storm surges increase we have some real impacts,” Sesto said, adding that most people in the audience recall Storm Sandy.

Sesto showed an aerial of an eroded peninsula, not unlike the causeway that connects to Greenwich Point.  She noted that during Storm Sandy the causeway was eroded. 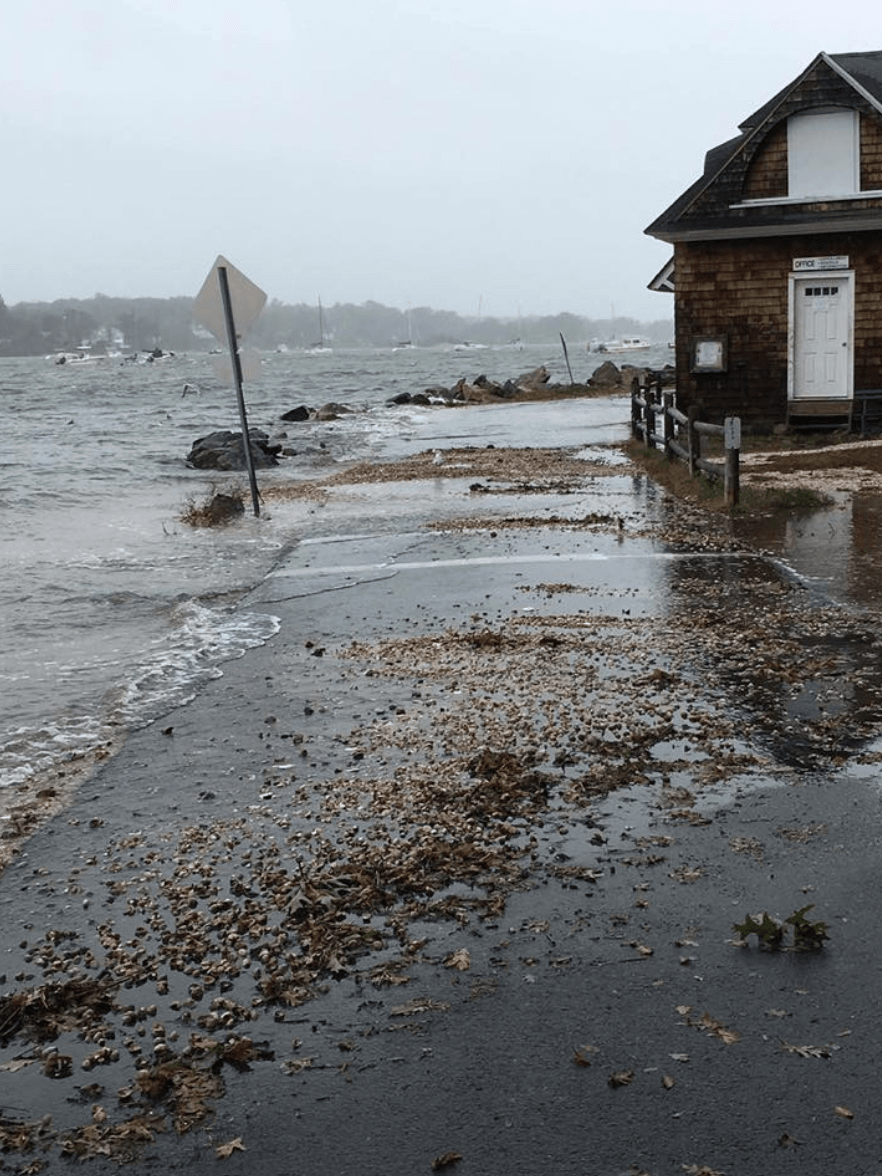 “It’s definitely within the planning horizon to see Greenwich Point become an island,” she warned.

And because it provides an important geographic function as a storm break, she said, “to lose Greenwich Point to erosion or sea level rise would mean losing a treasured asset.”

Sesto said that Greenwich is preparing for sea level rise and and storm surge.

DPW is elevating pump stations and is upgrading the Waste Water Treatment Plant.

DPW also proposed to elevate Sound Beach Ave, though that met with fierce neighbor opposition in part because, to qualify for state funding, it would necessitated construction massive rotary in place of the modest one.

“On a 30 year horizon, the bridge needs to be replaced,” she said. 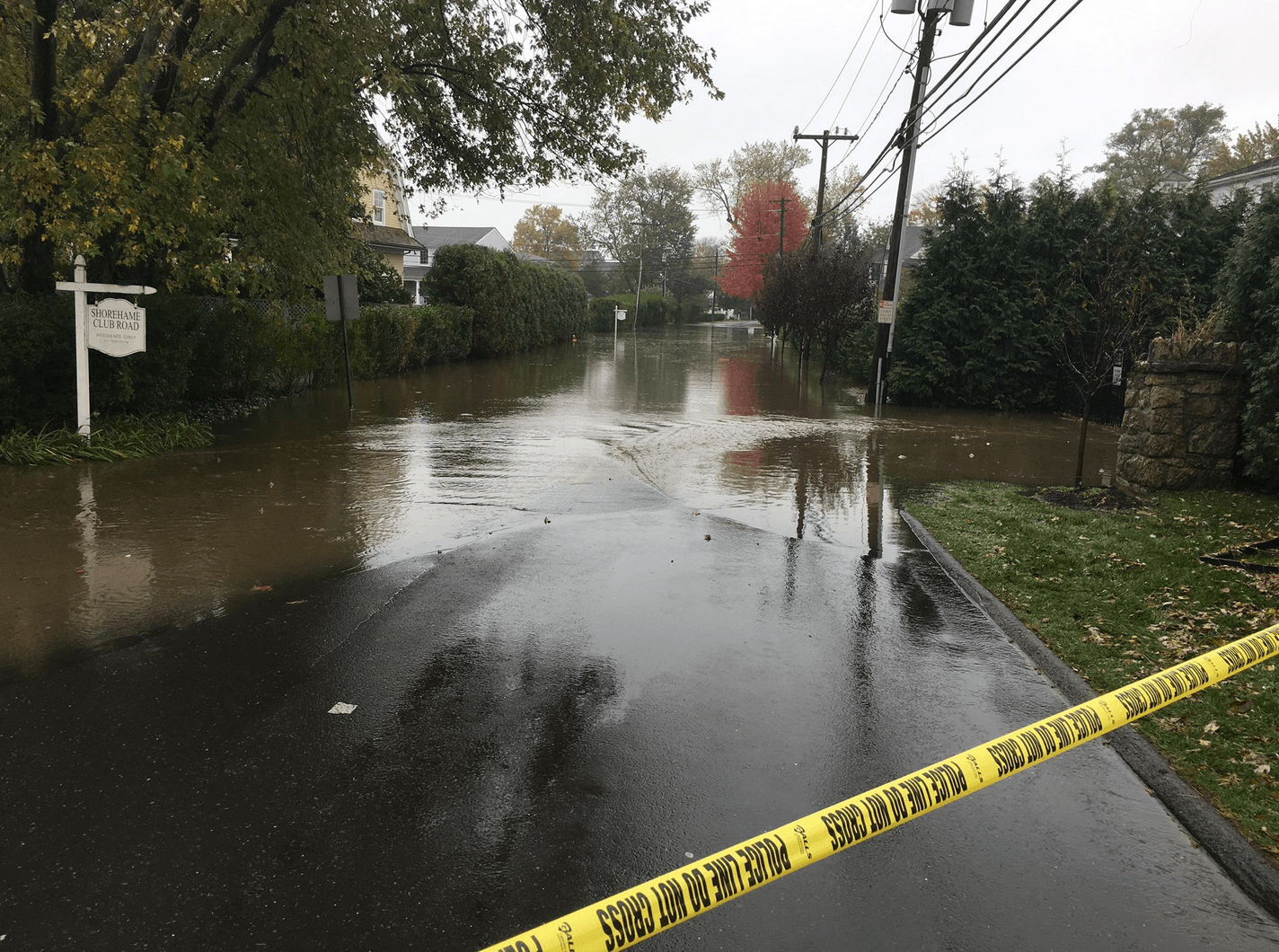 “When (DPW’s) proposal was put to the community – not just to replace that bridge but also to raise Sound Beach Ave to reflect sea level rise and the need to get to our low lying area of Old Greenwich – there was a strong outpouring,” Sesto said. “People said ‘We like the way that intersection looks and how it functions now.’ There was not sufficient concern on the community side about how we are going to get in and out of Old Greenwich in the future.”

“That situation makes me wonder is this a community not well informed? How can we be better prepared to have life and property to be preserved?” she asked. “We have to understand where we’re falling short for  you the public in not conveying what you need to know.”

Sesto said the town is assessing sea level rise projections for 2050, 2075 and 2100, to identify specific parts of Greenwich at most risk and make recommendations.

The Town is also evaluating risk to coastal septic systems and reviewing building and zoning regulations to propose changes with an eye to sea level rise.

“We want to identify the specific parts of Greenwich at most risk, identify town assets and make recommendations to minimize damage, and that includes damage to our shoreland,” she said.

In addition the Town is taking a look at its four tidal ponds.

“We know that between sea level rise and storm surge that the tidal character will change,” she said more brackish water will impact the ecosystem, including plants and animals that are attuned to certain salinity levels.

At Binney Pond we’ve been working to put in the right trees.

“The selection today may not be the right selection 20 years from now,” she said.

She said various groups and different professionals are involved in anticipating impacts to the town, including landscape architects, economists and planners. “We’re trying to look at this from a very broad scope,” she said. “It’s not just an ecological evaluation. It will include a lot of public recommendations.”

The recently adopted POCD urges a stronger role for the conservation commission, though it is not regulation, but rather designed for guidance.

Sesto said her Environmental Affairs Dept has 177 action items in the POCD. The effort is supported by over 30 organizations including the Greenwich Tree Conservancy, Land Trust, Green Schools, Green & Clean, BYO Greenwich and the Shellfish Commission.

“I suspect this year we will work on revising our open space plan,” she said. “We also look forward to implementing a food scrap program. There are requirements coming from the state that we need to increase recycling and decrease solid waste.”

Sesto said if all the action items are complete, the work is never done. “You have to have priorities,” she said. “Even if the world follows a low impact scenario, global sea level will likely rise at least 12 inches (0.3 meters) above 2000 levels by 2100. If we follow a pathway with high impacts, a worst case scenario of as much as 8.2 feet (2.5 meters) above 2000 levels by 2100 cannot be ruled out.”

Residents on Bridge Fix and Raised Rotary in Old Greenwich: “Fix the Railroad Culvert, Not the Rotary!” March 8, 2018 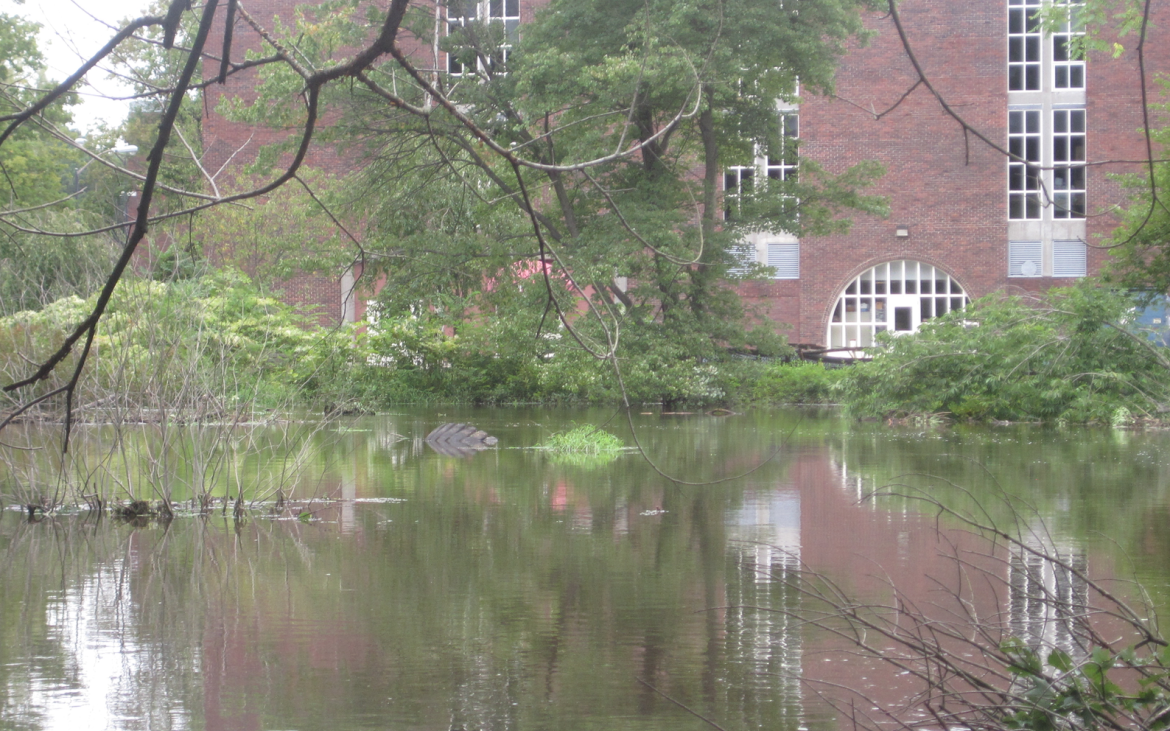 Flooding at GHS by the theater wing in 2011. Photo: Leslie Yager 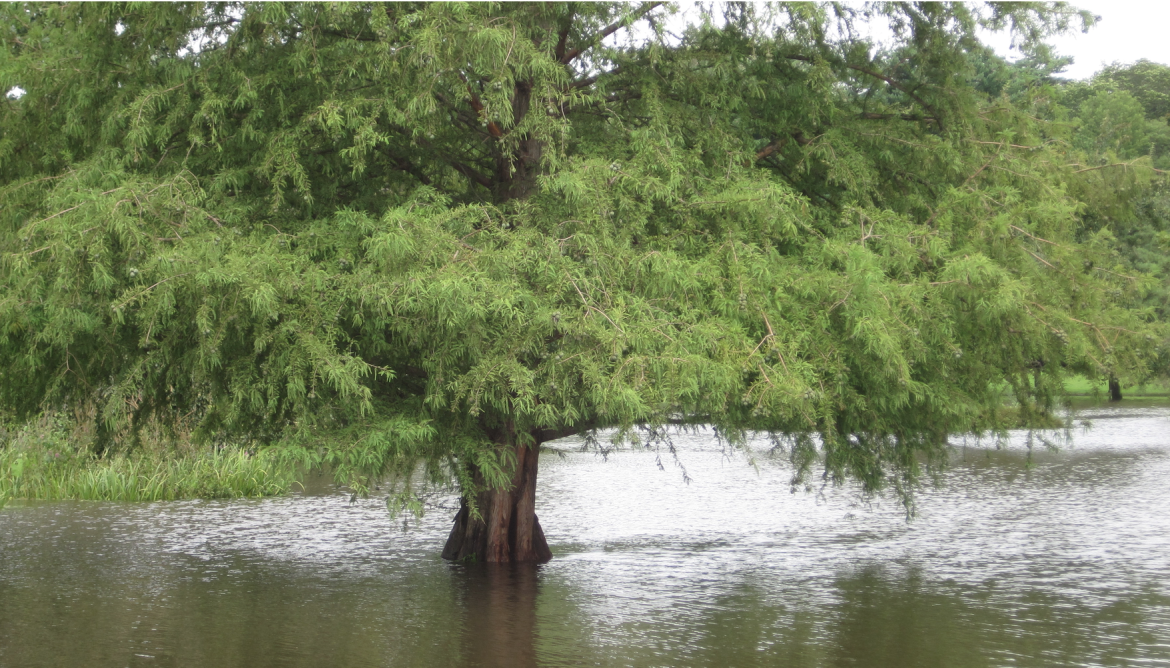 Flooding in Bruce Park after Irene in 2011. Photo: Leslie Yager