Large quantities of plastic were collected – everything from straws, to plastic bottles, shoes and tennis balls were gathered up, one piece at a time.

Some of the larger debris items included parts of docks, doors, tires and buoys.

“We have enough to pull together a complete outfit,” said Rachel Precious, vice chair of the Connecticut chapter of Surfrider Foundation.

Jack Egan of Surfrider Foundation said he was pleased to partner with local groups for the clean up.

“This is definitely a grassroots effort,” he said. “We do one beach clean up a month.”

Egan said that during February his group worked with volunteers in Stonington. In that effort, two dozen student volunteers included students from Connecticut College in New London to clean up the beach.

Egan said clean ups are good, but are not the solution.

“But we can’t clean our way out of this mess,” Egan said.  “We have to change our consumer behavior.”

Egan said a full third of the plastic the world produced is for single use. 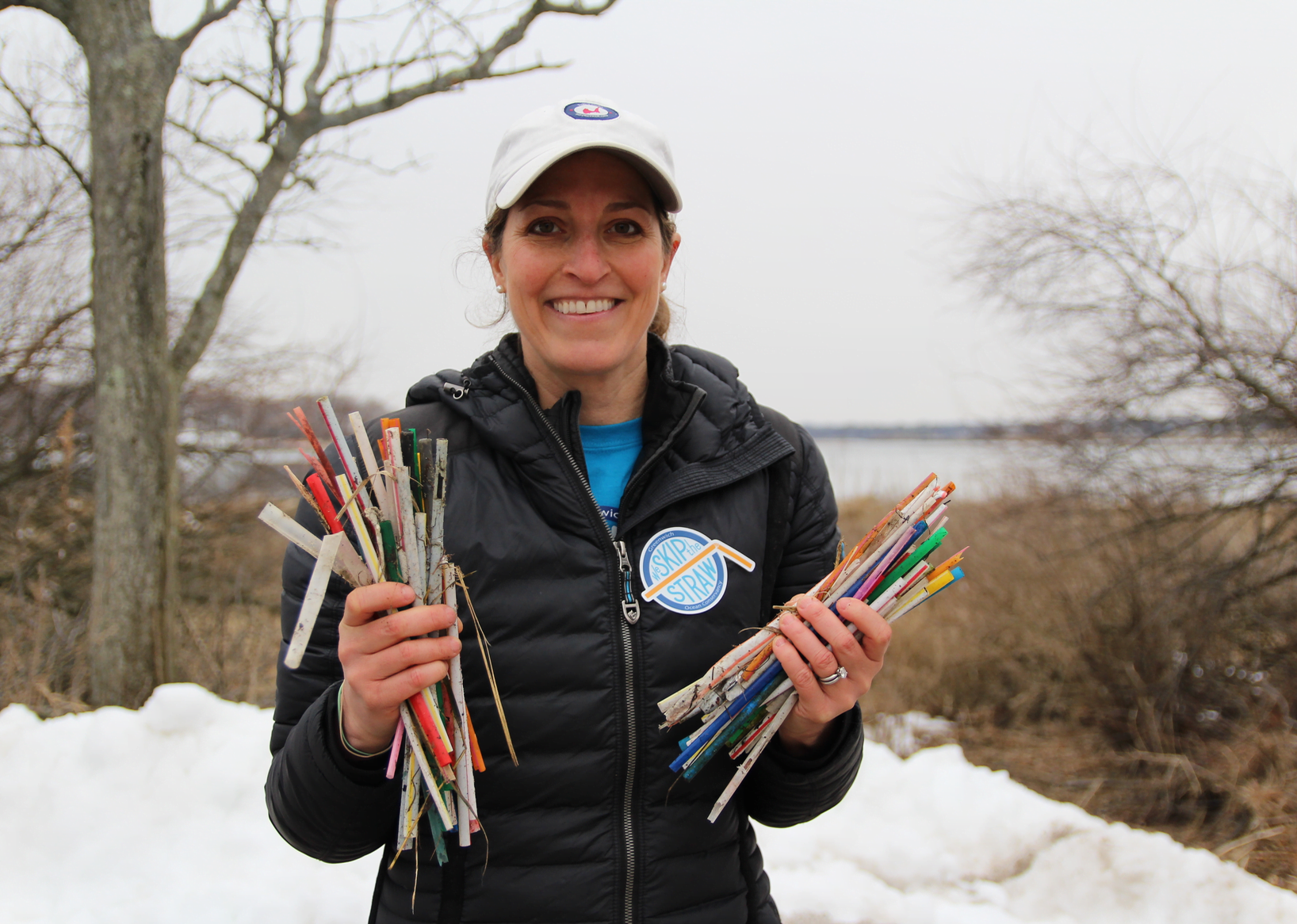 Julie DesChamps of Skip the Straw Greenwich at the beach clean up on Sunday March 3, 2019 Photo: Leslie Yager 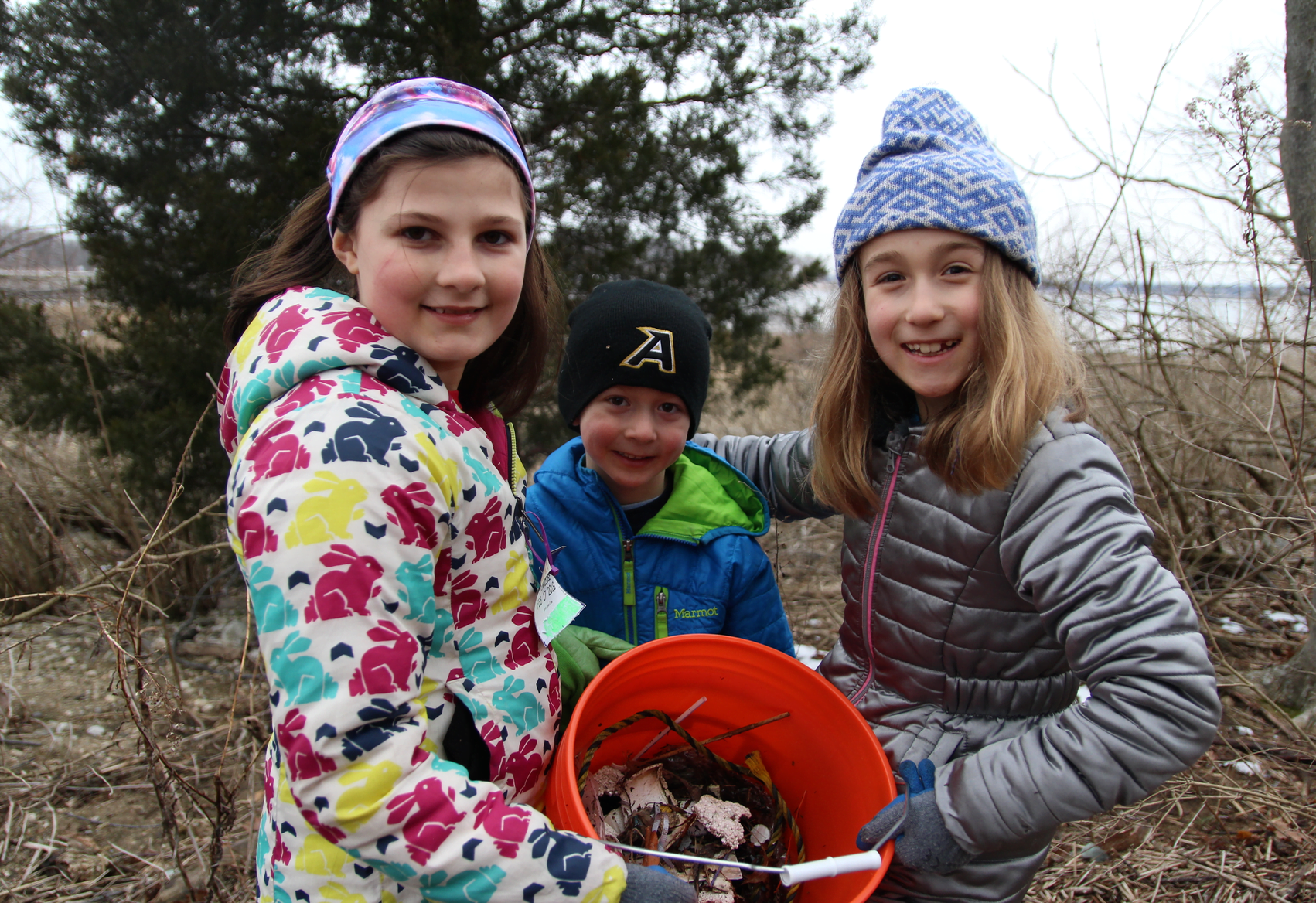 “These are my students,” Conlan said. “They could be doing so many other things but they’re here picking up trash that they didn’t leave. At the end, when they see all this, they are horrified.”

“And this is Greenwich where people are affluent and educated. What’s it like in another community where people don’t care?” he asked.

“I absolutely despise plastic,” Conlan continued. “I hate the Styrofoam trays too. And I want the plastic water bottles out of the student center at GHS. They leech Styrene and that’s bad for the kids.”

Mr. Conlan said that every Thursday members of the the Environmental Action Club at GHS collect the plastic water bottles from recycling bins at the high school.

The club members also collect the organic material from food service at the high school including vegetable and fruit scraps, and coffee filters for their composting effort. The composting bins were made by an Eagle Scout project. 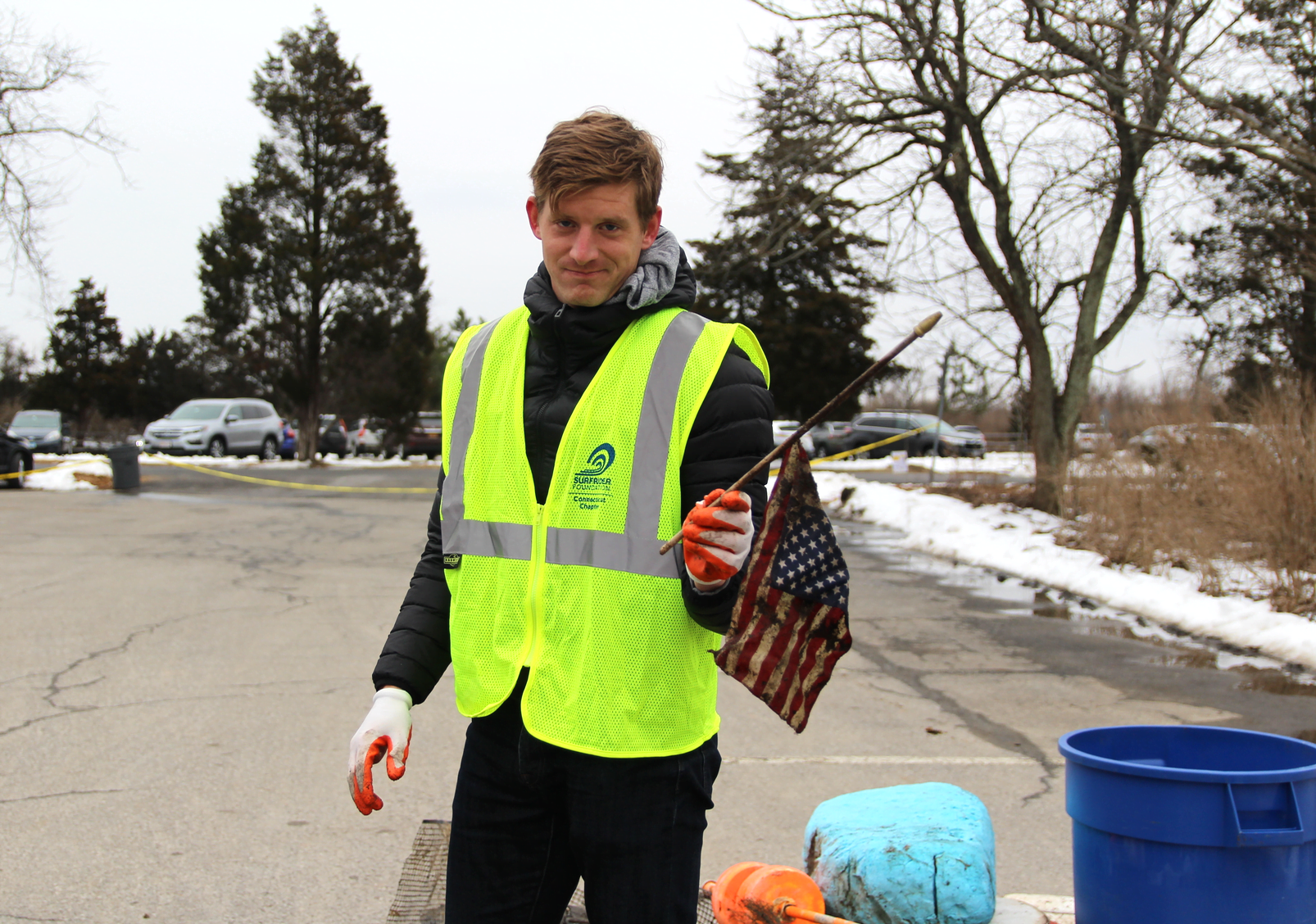 Rob Blink of Surfrider Foundation shook his head as he fished out an American flag from the mountain of debris collected by volunteers on Sunday, March 3, 2019 Photo: Leslie Yager

As volunteer after volunteer arrived with buckets of mostly plastic trash and dumped it onto a tarp to be sorted, Mary Hull of Greenwich Green & Clean shook her head.

“This will all go into the trash,” she said. “None of this is recyclable. It’s filthy and contaminated.”

Many of the volunteers at the beach clean up were Greenwich’s youngest, including Brett Sylvester.

“It’s fun and I stopped some pollution,” Brett said.

“You get disheartened to see so much garbage, but on the other hand you see a community that really cares,” said Ms. Precious. “There are people of all ages – and it’s nice to see families with buckets and gloves, and they’re picking up the garbage.”

Madeleine Martin and Guiliana Amodeo, both 4th graders at Riverside School, said they had fun picking up the trash, which was mostly plastic.

“At first Guiliana was at my house for a playdate, and she decided to stay and come with us to the clean up,” Madeleine said.

“There are a lot of sticks and branches, but it’s worth it,” Guiliana said, as she and Madeleine compared  their full of debris.

“We don’t like Styrofoam,” Madeleine said. At first we thought we’d find a  lot of plastic, but we found a lot of Styrofoam. It takes a long time to disintegrate, Madeleine said. And it’s all over the place. “This is what animals are eating. It gets into their stomachs and they can’t digest it. It’s a real shame,” said Madeleine Martin, a 4th grader at Riverside School. “Especially sea turtles.” 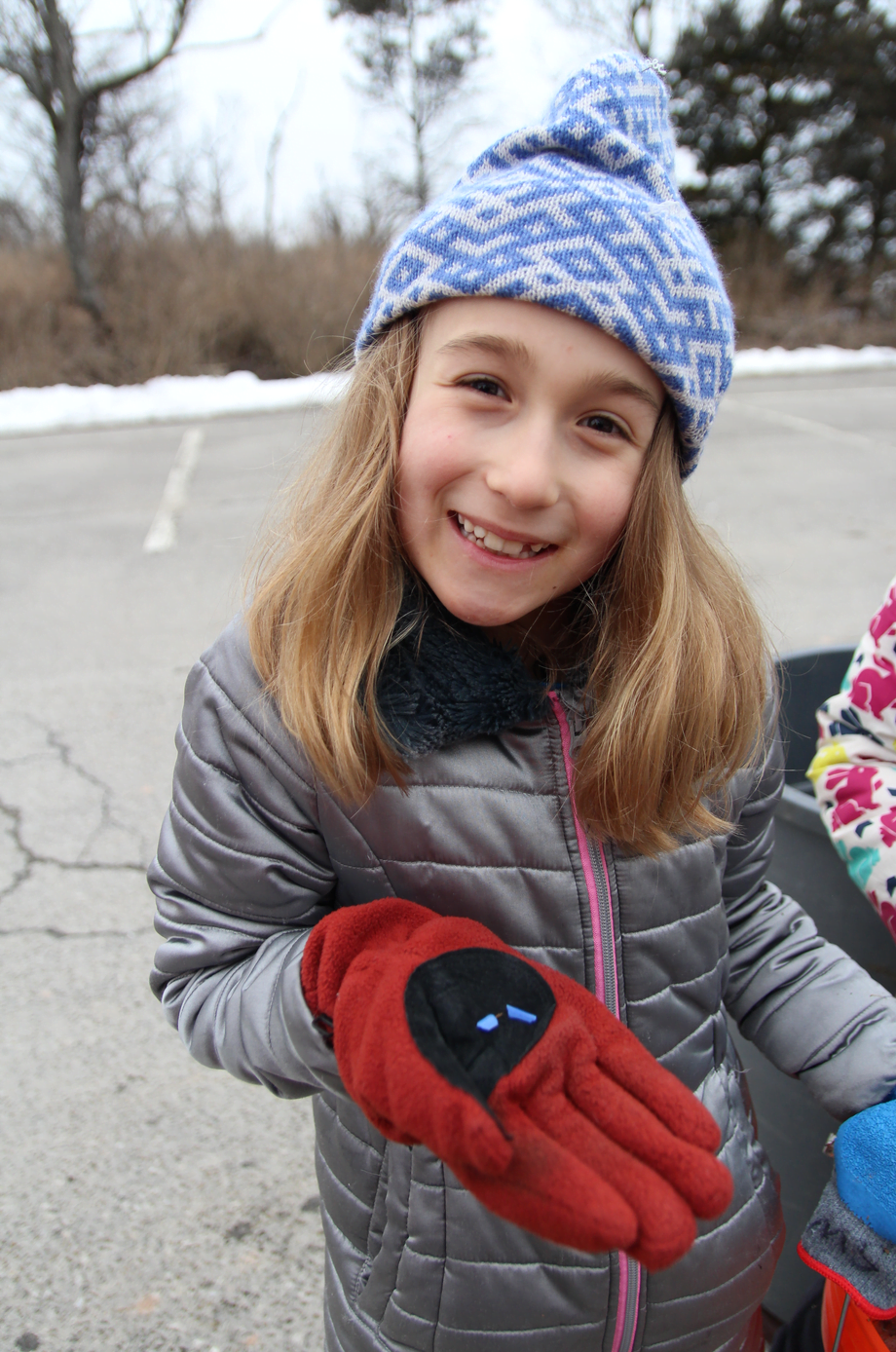 Madeleine Martin with some of the fragments of plastic debris that are dangerous to plastic found at Greenwich Point. March 3, 2019 Photo: Leslie Yager 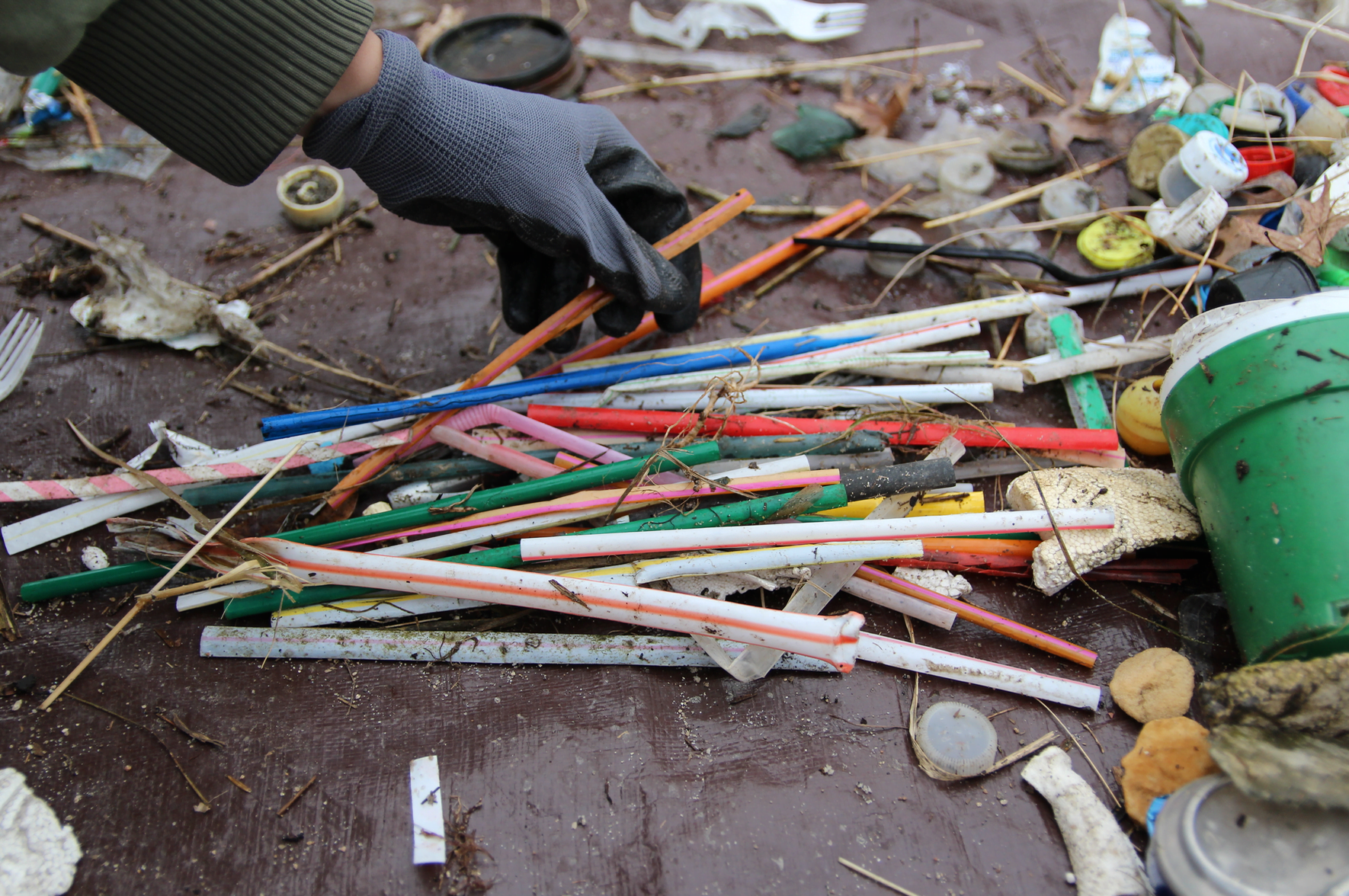 Piles of straws were collected during the beach clean up on March 3, 2019 Photo: Leslie Yager 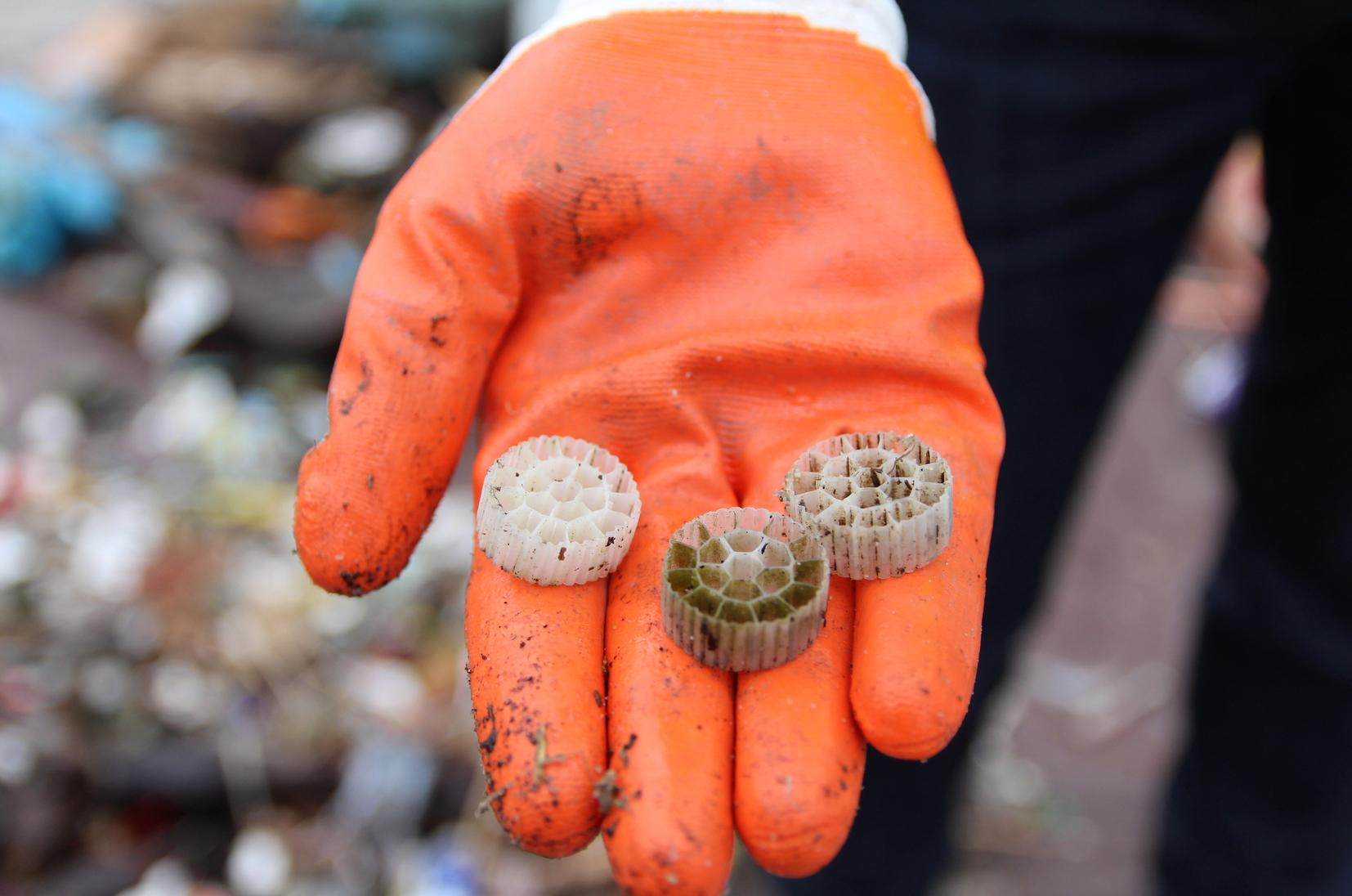 Dozens of sewage aerators popped up in the mountain of plastic debris during the beach clean up at Tod’s Point. March 3, 2019 Photo: Leslie Yager 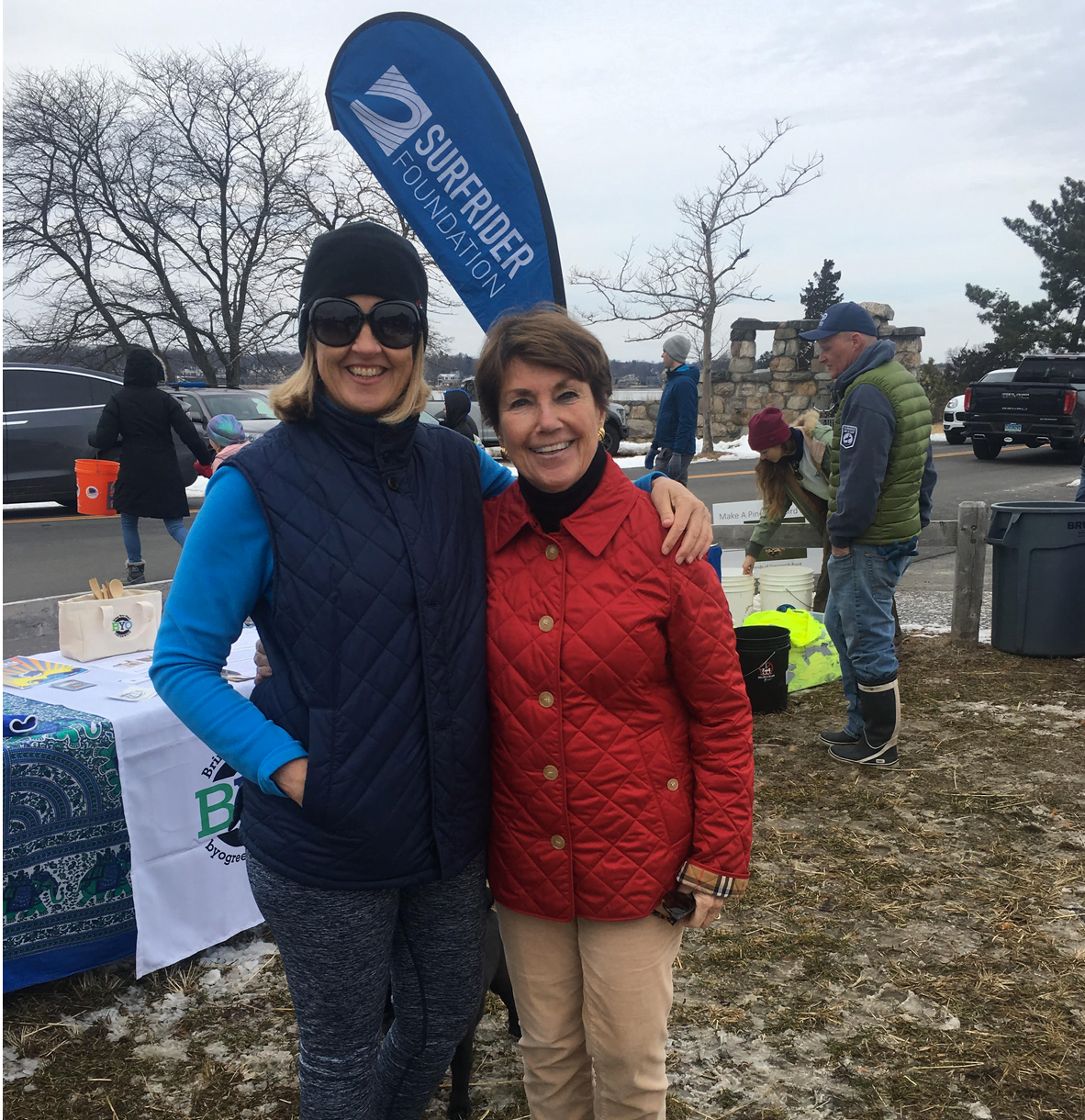 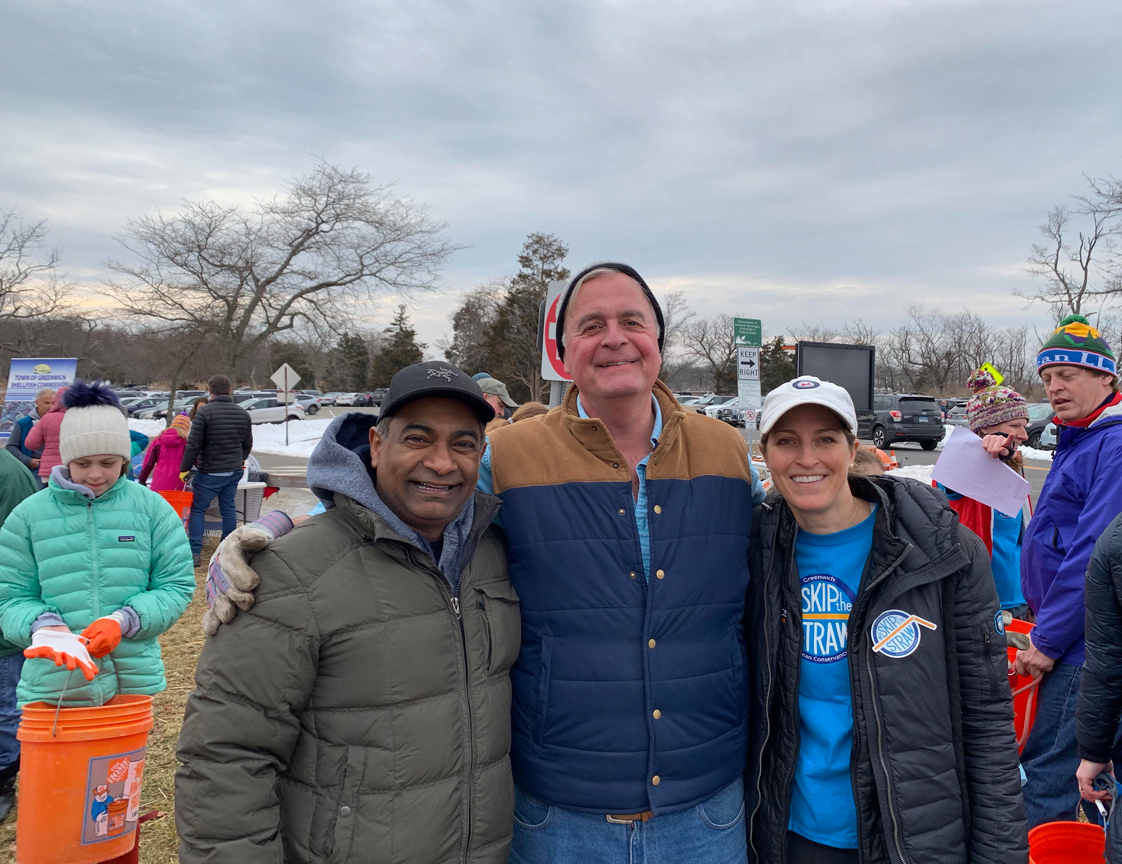 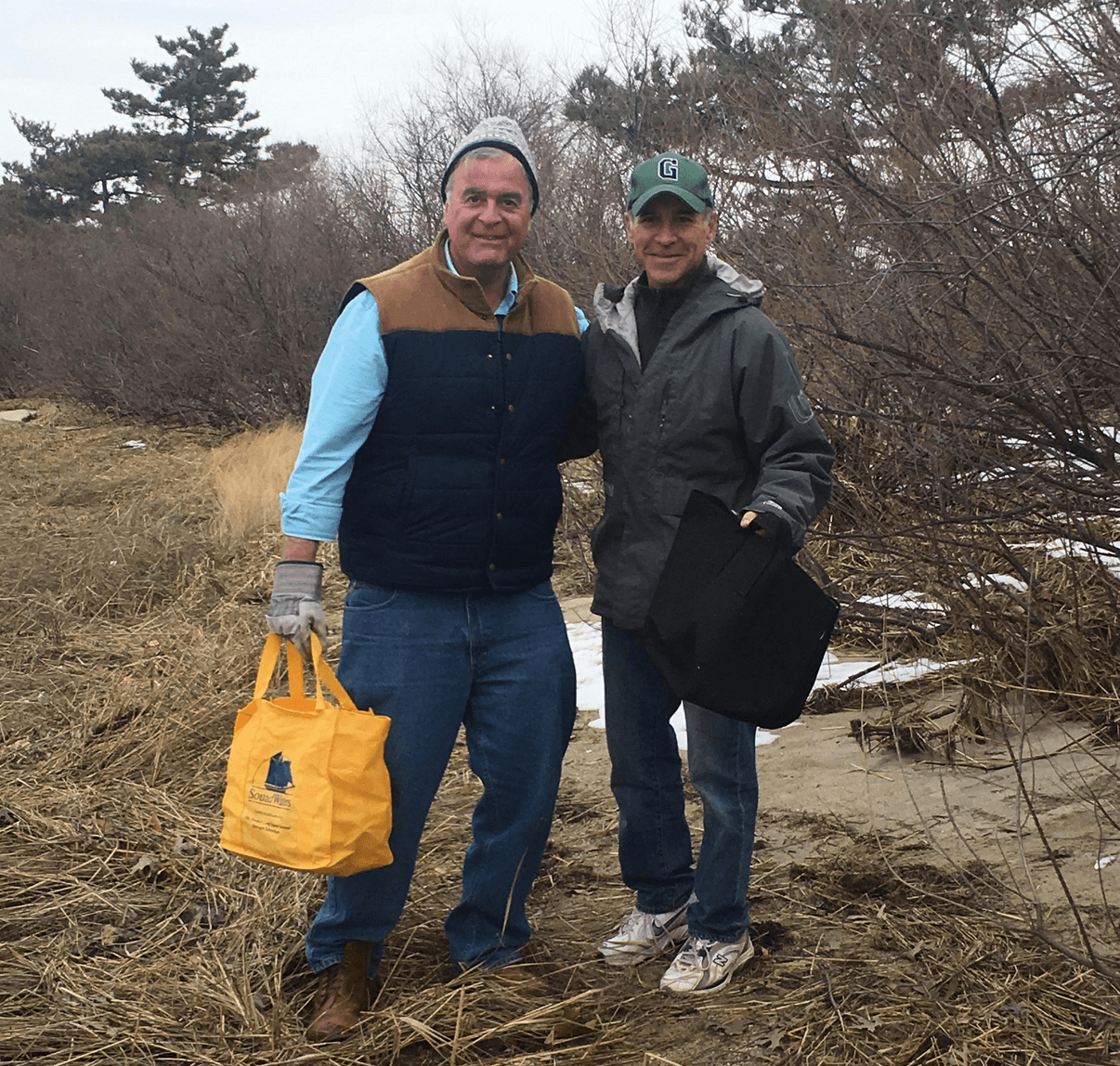 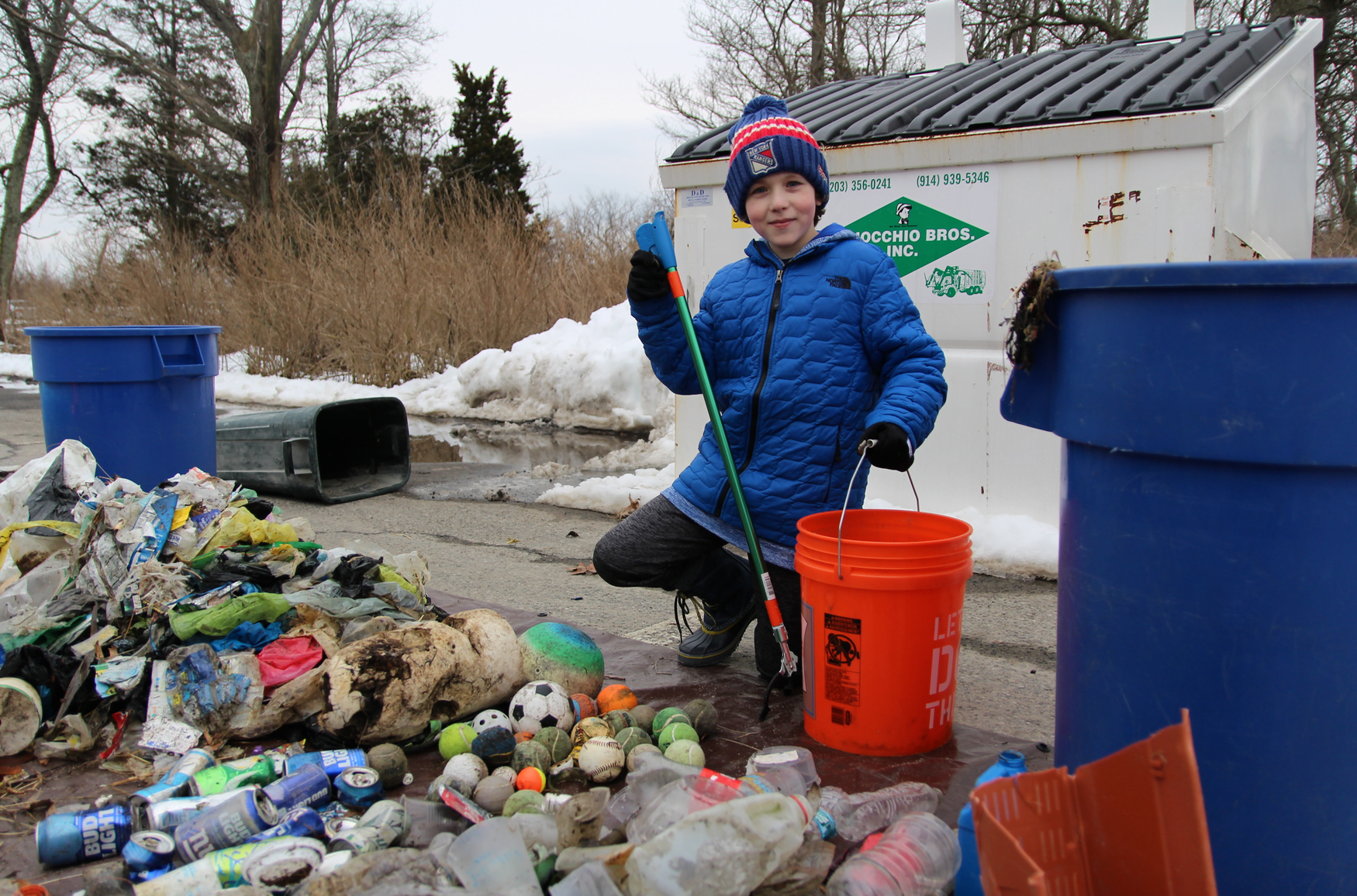 Brett Sylvester volunteered to collect trash at the beach clean up on Feb 3, 2019 Photo: Leslie Yager 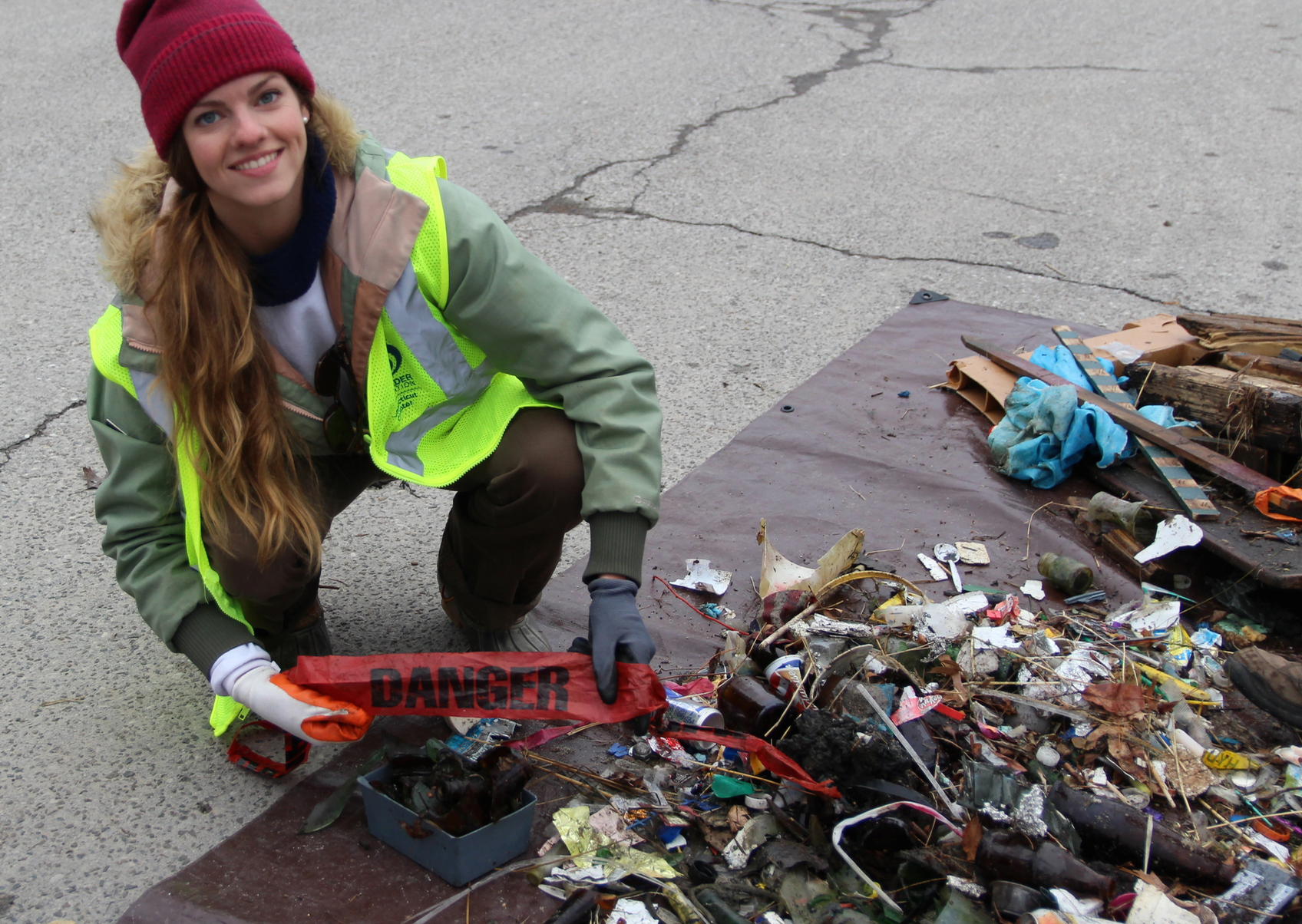 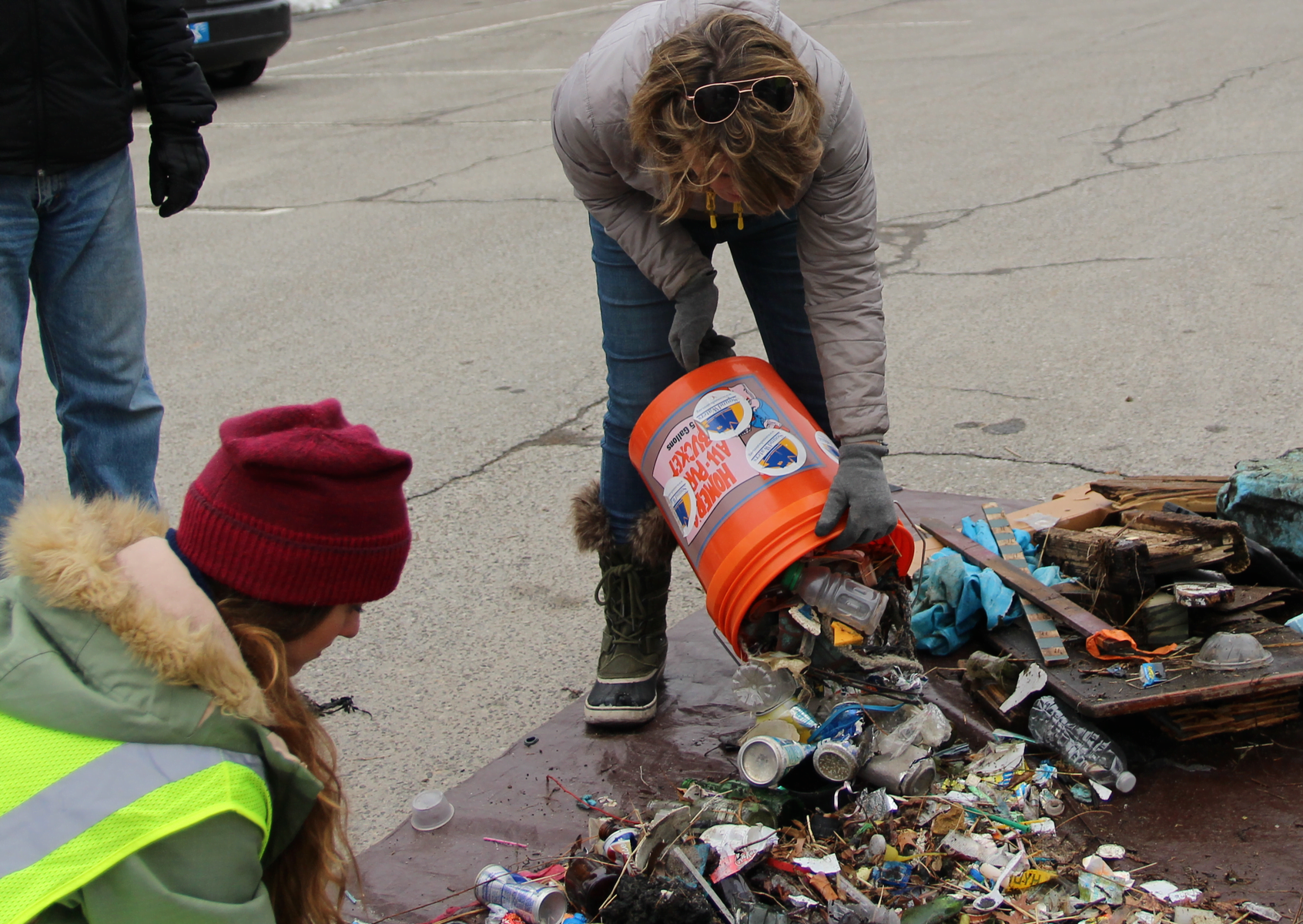 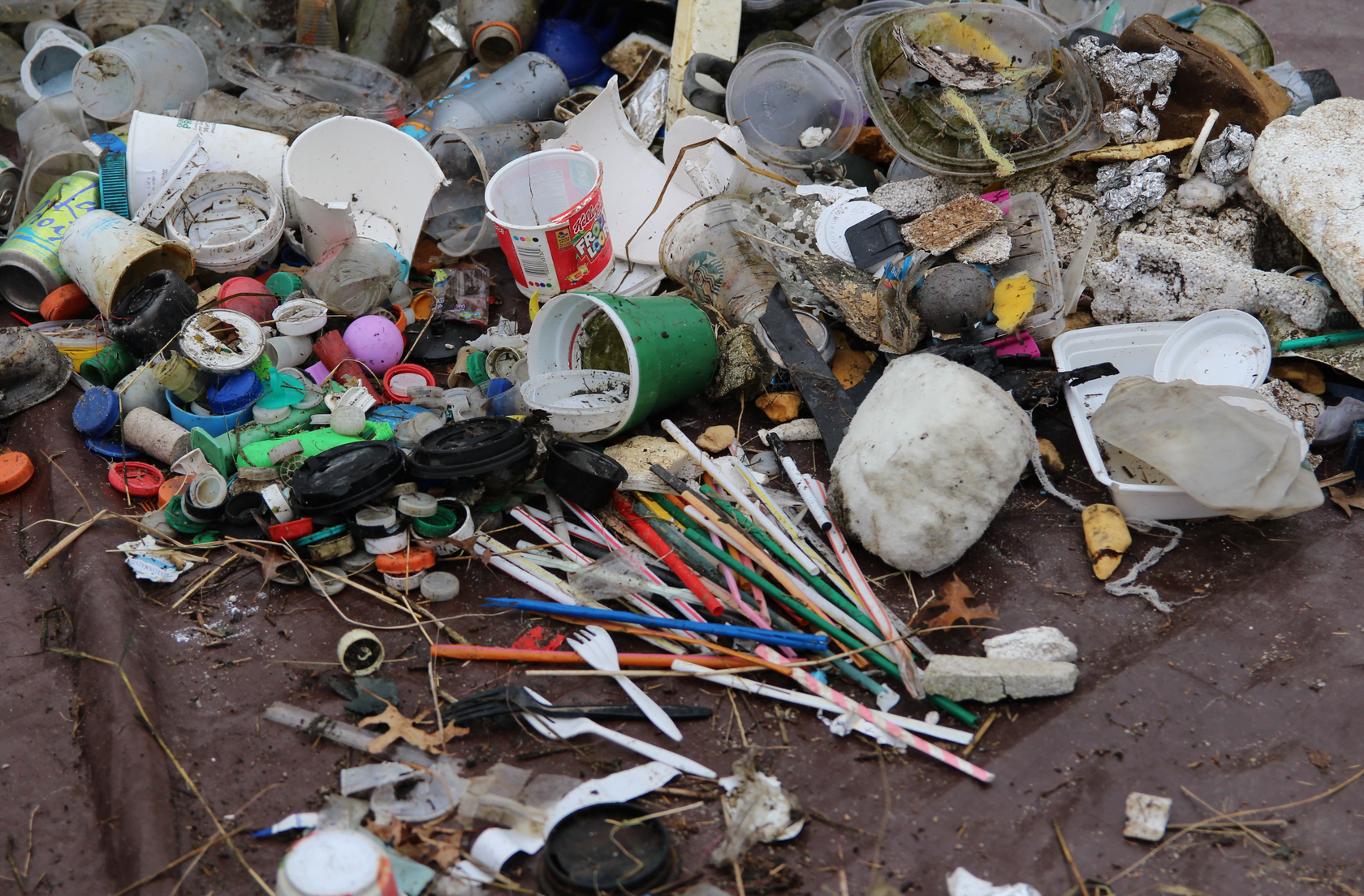 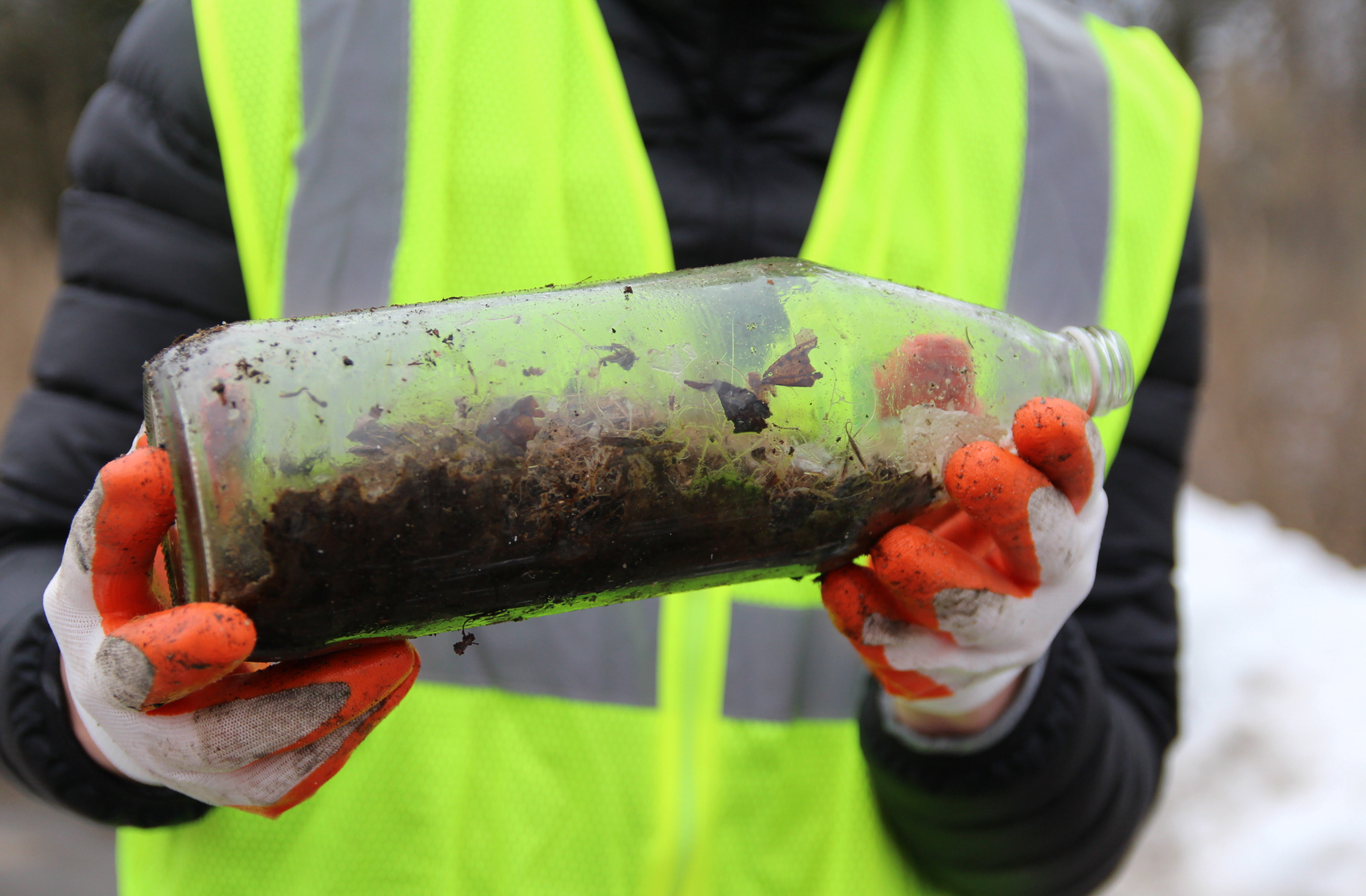 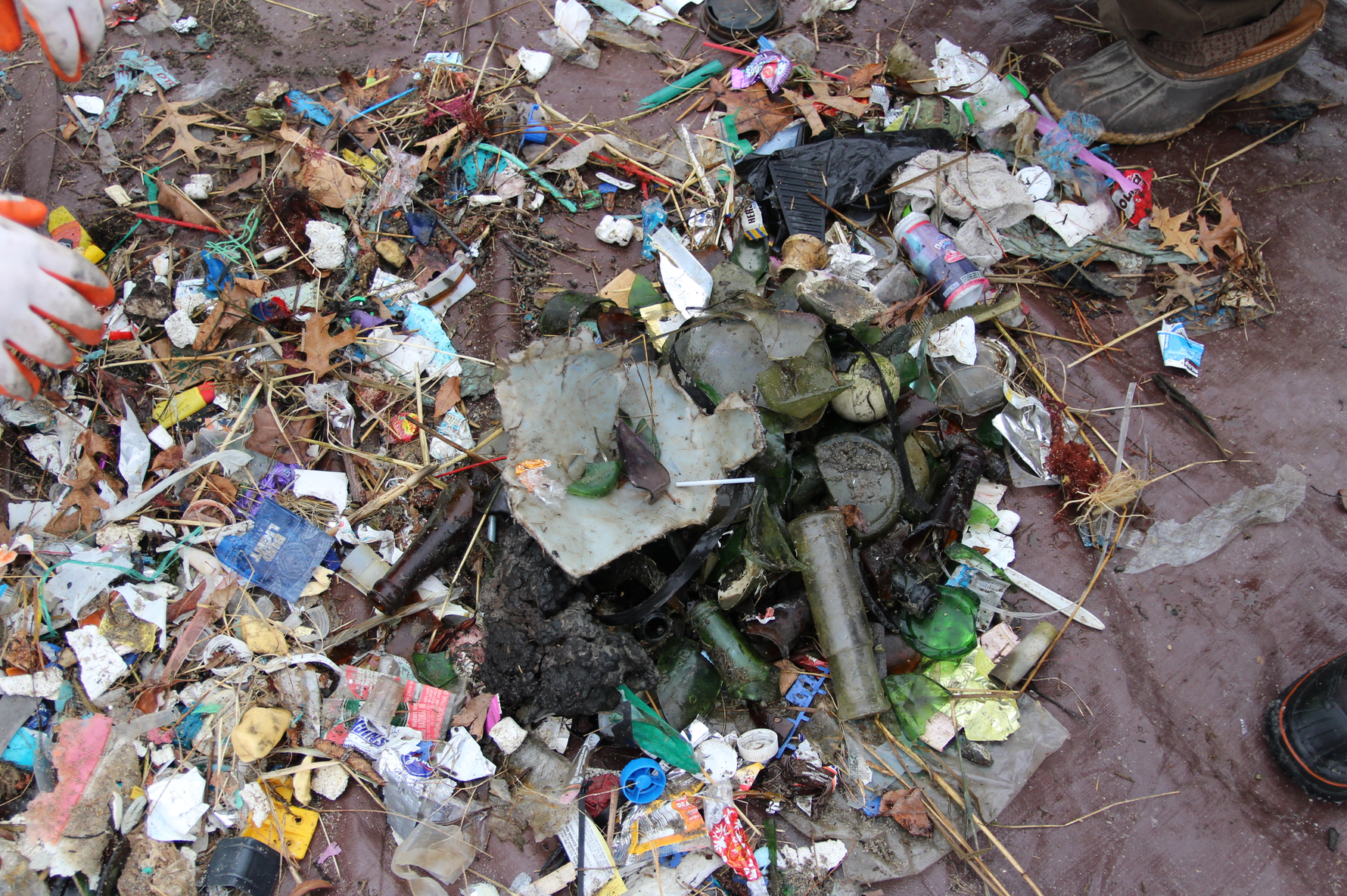 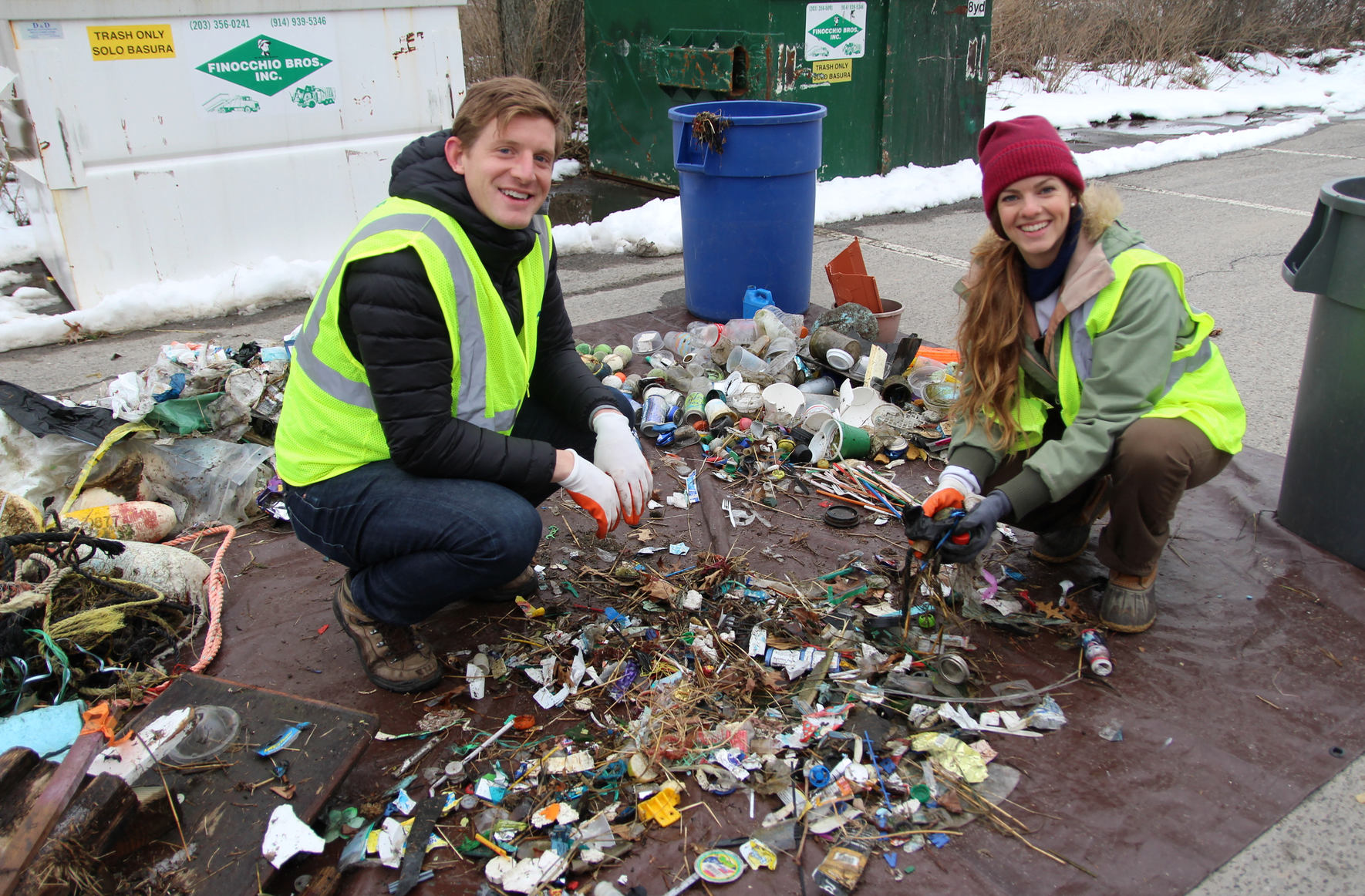 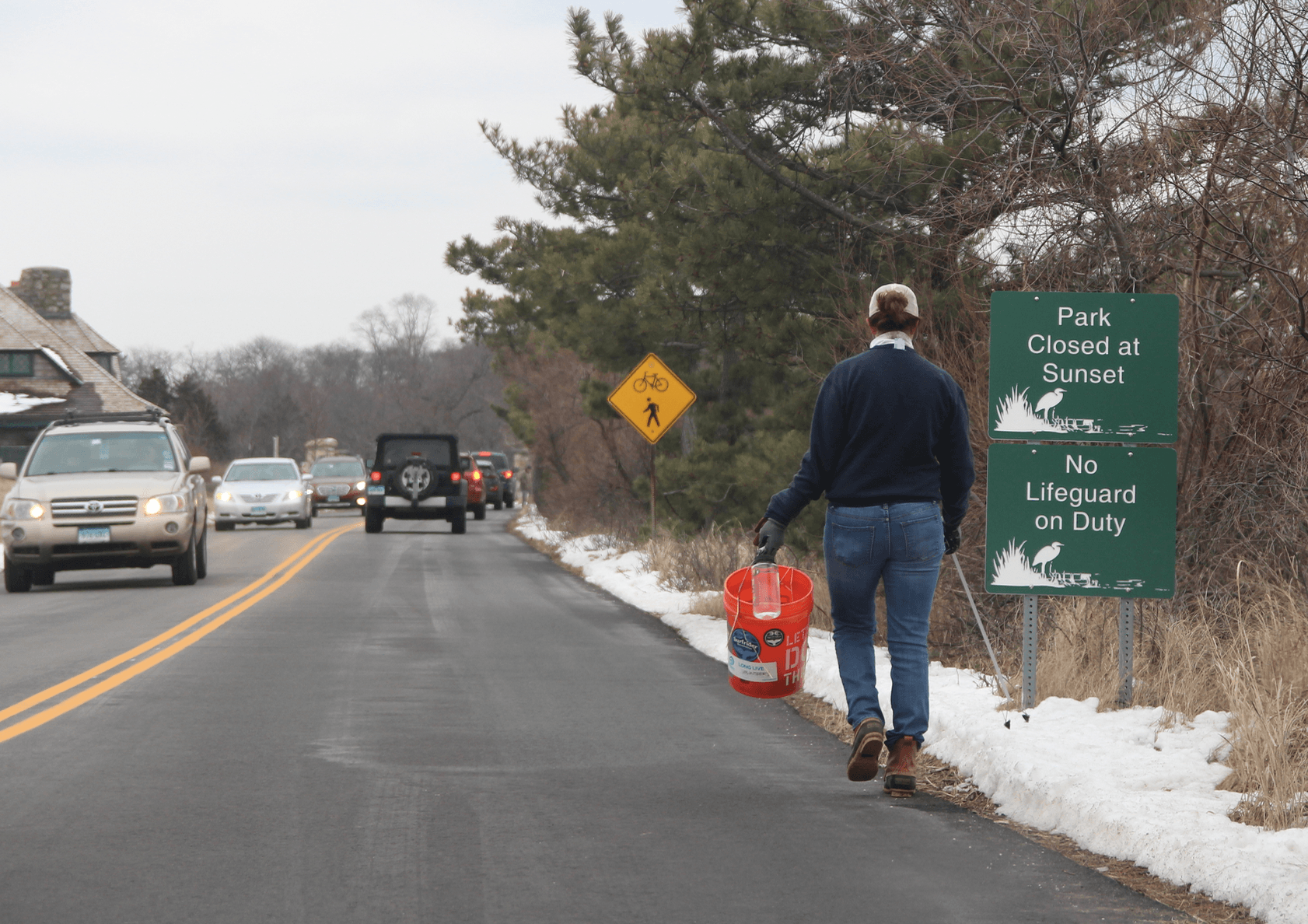 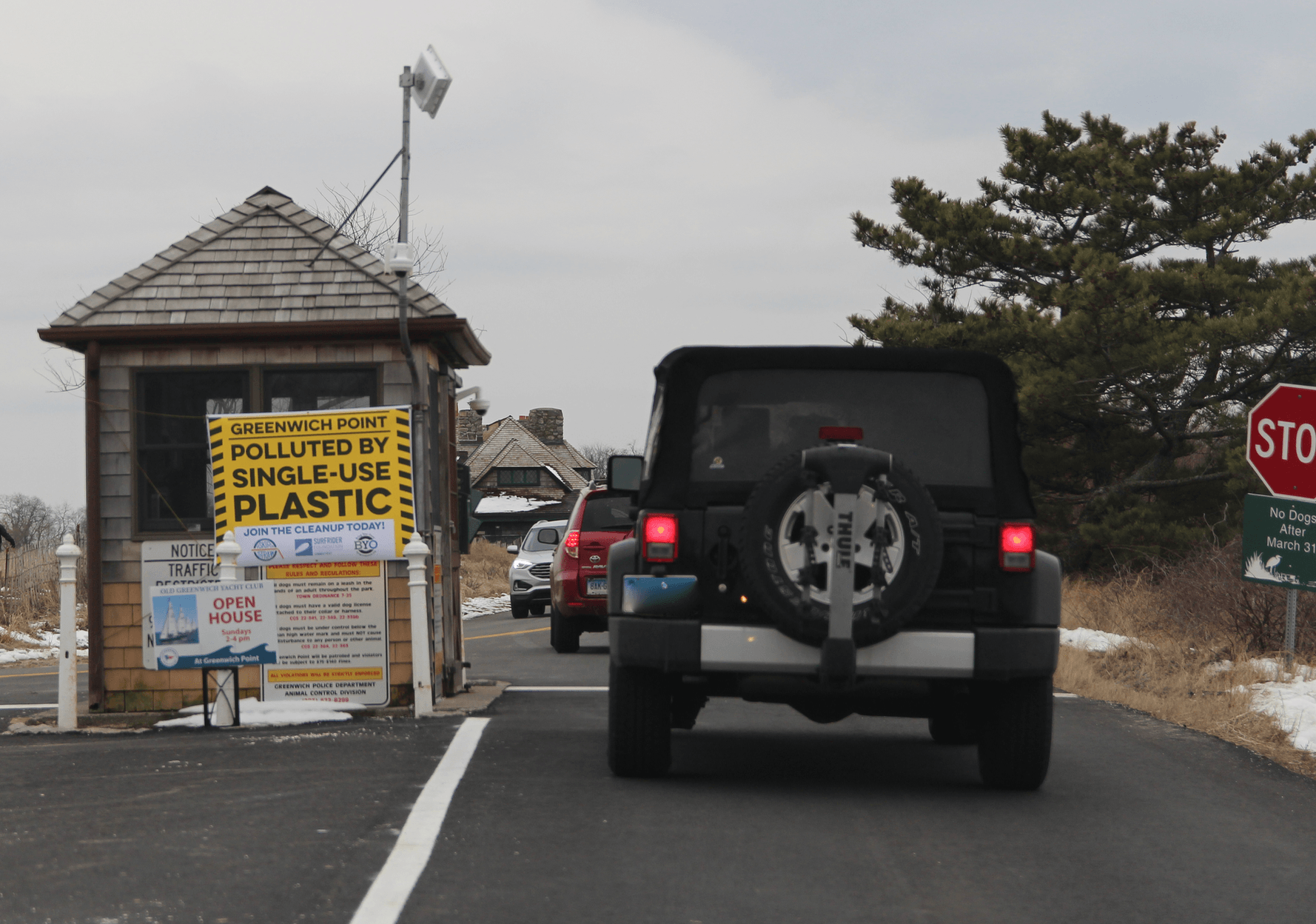