At the December Board of Education meeting, several members of the Food Services Committee, who are advisory to the Superintendent, spoke in favor of an alternative to putting individual dishwashers in each school.

Instead, they advocated for a centralized dishwasher system at GHS.

The idea is to use the same Food Service trucks that deliver meals to the schools to be heated and plated, and have them collect soiled trays and bring them back to GHS for washing.

Previously the public schools served meals on styrofoam trays, which don’t break down over time.

This fall they began using molded fiber trays in all the schools. However, these trays are non-recyclable and expensive at $45,000 a year to purchase.

Reusable ware and dishwashers are included in the Superintendent Dr. Toni Jones’ proposed capital budget for 2020-2021.

At the BOE meeting, Julie DesChamps, a member of food services committee and former chair of the Green Schools committee, said individual dishwashers might wind up costing the district more in capital and operating expenses than accounted for. She said unknowns included space limitations, renovations, asbestos remediation and additional labor.

“As a board, you asked for our input,” she said, adding that her committee had consulted with the Board of Health and other school districts.

The capital costs of the individual dishwasher proposal have been assessed at $313,000.

The centralized proposal would cost $87,000. There are associated operating costs with both plans.

“This plan is a Pandora’s box and costs could skyrocket,” said Nicole Chazen, a committee member, adding that the capital costs of the centralized system would be less than a third of the individual washer plan – $87,000 versus $313,000.

“The bulk of operating expenses are derived from part- time monitors who are critical to the success of the program and fill multiple roles to assure compliance with Health Dept regulations, prevent loss and supervise waste reduction procedures, further saving money and resources,” Chazen said.

She said centralized dishwashing would not increase pollution or  require additional vehicles beyond the two existing Food Services trucks at the high school.

“Our Food Services currently operates as a centralized system working out of the high school. Every day, school lunches are prepared and processed at GHS,” Chazen explained. “From there, lunches are transported to each of the individual K-8 schools to be heated and plated.” 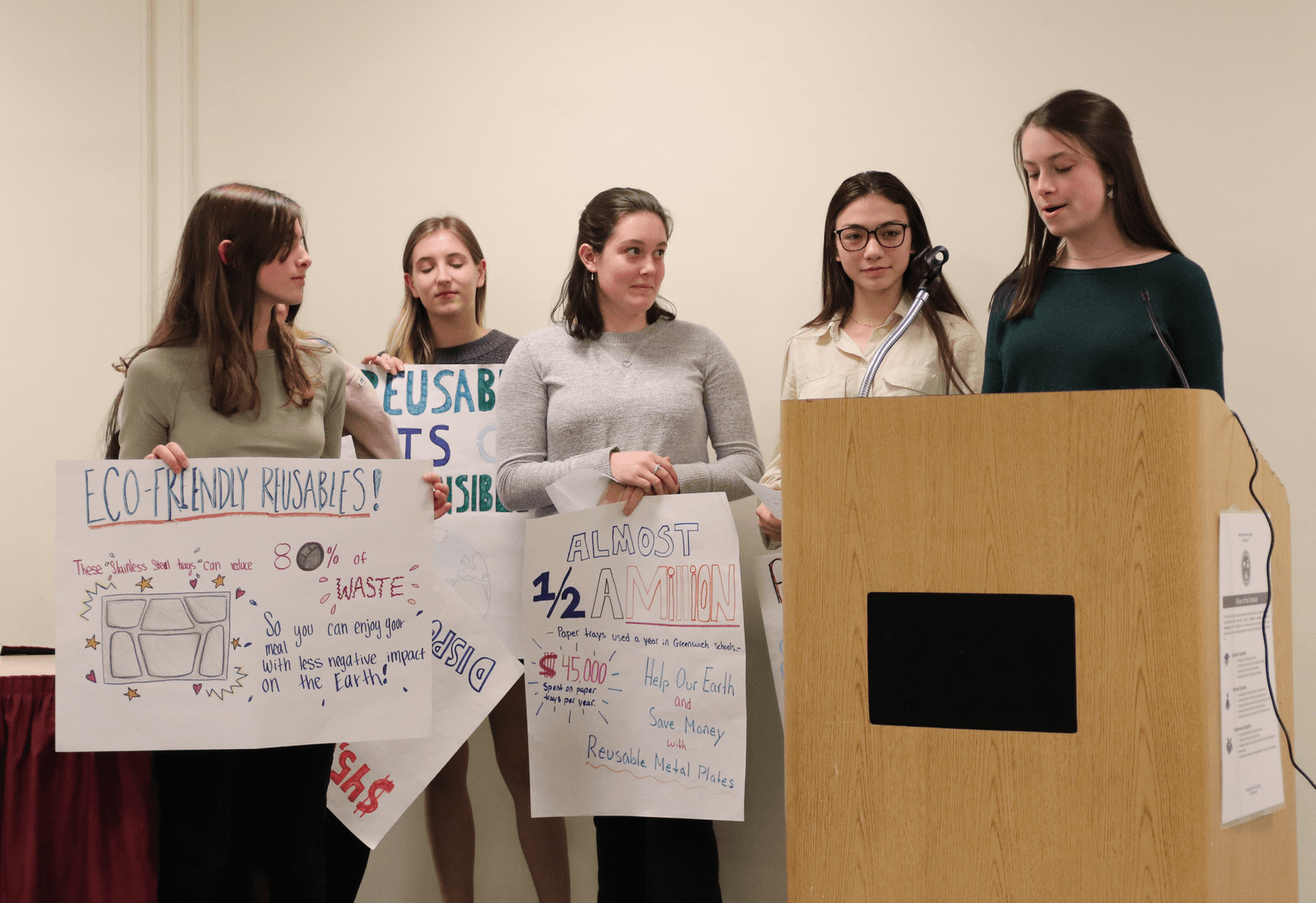 Students at the November BOE meeting at GHS spoke in favor of reusable wares in cafeterias. Nov 21, 2019. Photo: Leslie Yager

The clean, sanitized trays would be transported in the same trucks already scheduled for morning food deliveries to K-8 schools.

As clean trays are dropped off, used trays would be picked up.

“We have confirmed there is enough room on the trucks to carry the trays, that it’s acceptable to the Board of Health, and not provide additional labor costs or raise issues with the current labor contracts. Since the trays are transported in insulated carriers with wheels, there is no carrying or lifting to be done by the drivers,” Chazen said.

Committee member Dr. Elissa Diamond-Fields said although used trays would be transported in the same trucks as food, the trays would be rinsed to remove food residue before being bagged and packaged in insulated carriers for transport in accordance with the Board of Health guidelines.

“We have confirmed that this is acceptable to the Board of Health,” she said.

“Monitors would oversee sorting to minimize loss of utensils and trays and maximize waste reduction, which could save the town $9,000 in solid waste disposal costs,” Diamond-Fields said, adding that parent volunteers currently perform that task.

She said the monitors would also supervise food share tables to comply with state guidelines. These are tables where students can place unopened food and drinks that they choose not to eat or drink for other students to take.

Lastly, the monitors would transport food scraps to outdoor bins and oversee compost, since custodians’ union contracts prevent them from removing the collected scraps.

“Despite a grant of $20,000 from Connecticut DEEP to construct and install the outdoor compost bins, the majority of the bins sit unused because of this contract issue,” she said.

Nerlyn Pierson of the Food Services Committee said not all schools have space for a dishwasher.

“If we eventually have to move to a centralized system, to accommodate the schools that can’t accommodate a dishwasher, why not do it from the start and save hundreds of thousands of dollars in capital costs?” Pierson asked. 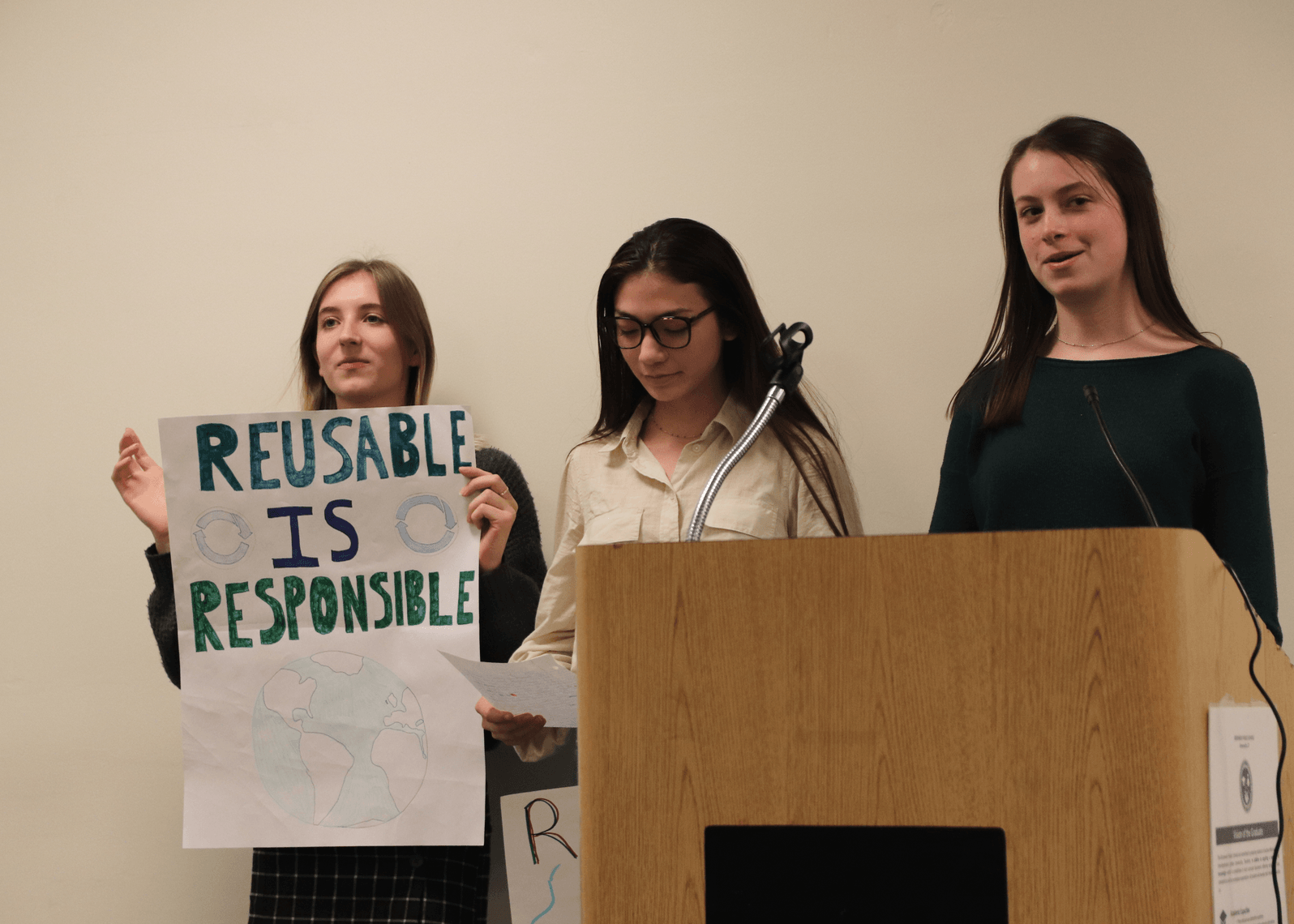 Abbe Large, a five year member of the Food Services Committee, had her children read her statement in her place. “The committee met with every constituent. We crossed every t and dotted every i with regard to the labor, materials, process, maintenance, sustainability and the use and responsibility of our taxpayer dollars.”

“This is bigger than just dishwashers,” Ms. Large wrote. “This is about our ecosystem and bottom line. This decision effects tax dollars and most town departments. …Use a system already in place.”

During discussion of the capital budget, Dr. Jones noted the Food Services Committee’s proposal had not yet been vetted by staff.

“Perhaps over the coming months as we get a chance to evaluate it,” she said. “We have a lot of operational study to do. …We have not run the numbers.”

Dr. Jones said she had a conversation with the Palo Alto Unified School District in California, which started using reusable dishware and cutlery in their elementary schools this fall.

Jones said Palo Alto wound up having to add an extra truck in the afternoon to avoid cross contamination between food and dirty trays.

According to the Palo Alto website, the effort in elementary schools represented the first phase of a zero waste project to have all schools follow suit.

In fact, on January 1, 2020 the city will implement an ordinance banning all plastic straws, utensils, stirrer sticks, drink plugs, produce bags, and other disposable plastic items.

“Vetting is a slow process because it’s one school at a time,” Jones said. “We’ve already started….We’re asking for money for dishwashers at every school.”

“I’m prepared to vote for this as a budget place holder,” Sherr said.

Jones said many questions remained, including what days have the heaviest use of reusable wares and whether two trucks offer adequate cubic feet.

She said some days, such as pizza day, have heavier use of trays and that there were many questions for Food Service, Facilities, Finance and Human Resources.

“It will take time,” Jones said.

“Here is the challenge. Procedurally, capital money is not fungible. What you ask for is specific. You can only use it for what you ask for. If we’re asking for money for dishwashing, maybe it’s for a ‘dishwashing system’… The CIP sheet has to say we are committed to sustainable dishwashing and we are evaluating the best way to do that. We know from the work Dan (Dan Watson, former Facilities Director) did last year, it’s not as easy in some schools as others.”

Also, Bernstein said, “You’re going to need human beings to actually do this. Whether you’re adding runs to the trucks or adding people to do the actual washing, packing and rolling the carts – you have to account for that.”

“The committee has done great research. Hand it all over because they’re going to validate every little bit of it,” Bernstein added. “I’m worried we’re not going to have enough on the operating side.”

“Capital is a solvable problem, but we have to be thoughtful about what we ask for, because if the signal is that we don’t know what we’re doing, when we get before the BET or go to the RTM, we’re not going to get a lot of support. We have a history – whether it’s earned or deserved or not – of asking for money and not spending it for a very long time. That’s going to come back and bite us,” Bernstein said.

“The irony is not lost on me that we’re finally seeing Central Middle School field – that project for this feasibility was authorized almost 24 months ago. We had a little execution problem,” Mr. Sherr said. But, he added, “I’m interested in having the option fully evaluated. If it’s more sustainable, that’s what I’d rather do.”

Sherr said he’d like the evaluation done in “a scientific and clean fashion.”

“I’ve seen analysis that winds up being skewed because someone on staff has one preference or another. I’m going to count on you, Toni, to scrub all that out,” he said to Superintendent Jones.

“Job preservation in any particular school to me is not a part of that equation,” Sherr added.

Karen Hirsh said she was concerned the alternative proposal might result in delaying dishwashing of reusable wares for a year.

“I’m concerned we’ll go before the BET for two days of grilling and there will be questions we can’t answer,” she said. “I think it’s important to vet those options, but I don’t want to put it off for a year.”

“We don’t have all the information today to make a decision,” Bernstein said. “However, as we describe it on the CIP sheet, there is the opportunity to describe what we’re doing, and this work can be done concurrently.”

The board voted unanimously to approve the revised $32,155,000 capital budget proposed by the Superintendent.