New Lebanon School principal Barbara Riccio addressed 50 residents at Wednesday’s Byram Neighborhood Association. She fielded a range of questions about her “little school on the hill.”

Riccio, upbeat and confident after an uphill battle preparing a campus annex to relieve crowding at her school.

She said all three kindergarten teachers had retained for the 2014-15 school year and that although the head count changes day-by-day — with a new kindergartner registering as late as Wednesday morning — there are 42 kindergartners assigned to two homerooms.

Riccio clarified the number of classrooms, explaining one kindergarten section has 16 students, and the other has 27 students, but is co-taught by two homeroom teachers.

She explained that rather than making three separate classroom, Riccio said staff took advantage of an over-sized room to create the co-taught classroom. Still, Riccio said there are few moments during the day when all 27 are in the room. She said that teachers do a lot of small group instruction.

“There is a para professional in the morning, a special educator, an ESL teacher, and a literacy specialist and interventionist,” Riccio said, listing the staff who cater to the 42 students. 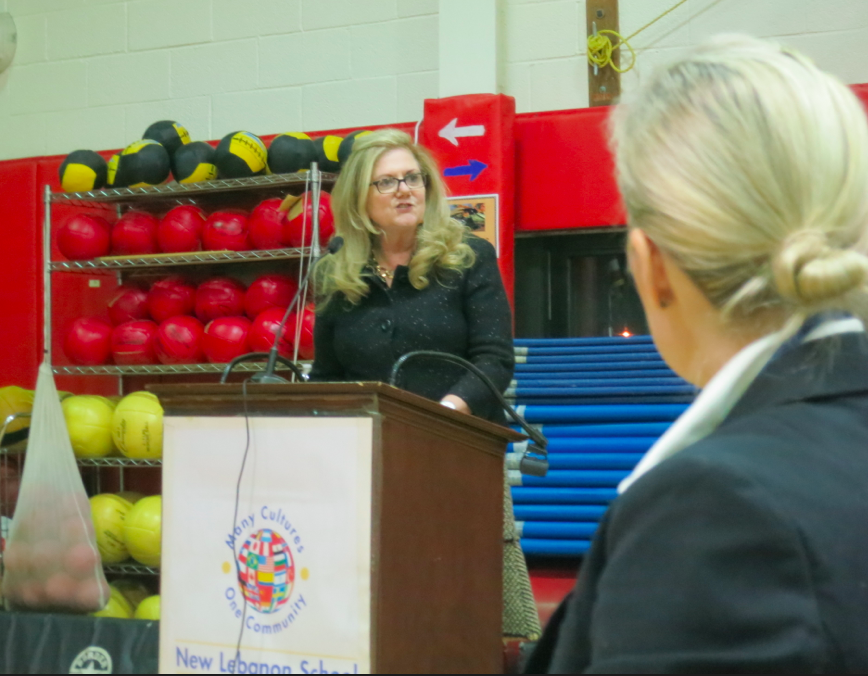 Barbara Riccio, principal of New Lebanon School, speaking at a Board of Education meeting in February held at her school.Credit: Leslie Yager

Riccio: Growing Enrollment at New Leb is “Very Good News”
Ricchio, who worked closely with PTA president Mike Bocchino and other tireless champions of the school including Clare Kilgallen, to get the satellite classrooms up and running at BANC.

“We’ve gotten off to a really good start considering how many things we had to manage and how many balls we had to keep in the air,” she said.

She described the last several years of increased in enrollment at New Leb as very good news, even though the past three year of increases have resulted in overcrowding. She said the space at BANC required extra planning, including details for adequate security and technology.

“Everyone had to work through the night the last number of weeks. Our teachers were amazing,” she said. “They put in much of their own time to make this happen.”

She packed up of their classrooms, with some materials going into storage at Havemeyer, and the remainder set up inside the BANC annex.

Riccio said a letter describing the plan and traffic pattern had been sent to neighbors, who, in turn had voiced concerns about conflicts with activity such as garbage pickups, but all were cooperating nicely.

Describing the move of kindergarten to BANC as creating breathing room, the principal said that it allowed an additional homeroom.

Other benefits of the additional space meant moving OT and PT off the auditorium stage.

Educational Programs – Racial Imbalance – Feasibility Study
Riccio said that before CT Board of Education Commissioner Pryor left, he approved the Greenwich BOE plan for dealing with racial imbalance, and that a renovated New Leb school would work toward that end by accommodating more students, enabling them to “magnet in more students and balance the backgrounds of the students within the building.”

The New Leb principal said, “What that means is it makes us eligible for diversity grants with up to an 80% reimbursement.”

Riccio said she is working with a project team that includes parents, some members of the RTM, teachers and architects.

She said the project team met throughout the summer. The BOE approved a feasibility study, Riccio said, and the team is looking at what is educationally appropriate, with an eye to ensuring maximum reimbursement from the state. Plans are being drawn and costs are being estimated.

She said part of the vision is not only to expand space to “magnet in students,” but also to include a number of pre-school classes at the back of the building, “so that all our students in the Byram community will have access to free appropriate public education.”

Riccio said New Lebanon School has a vigorous International Baccalaureate program, but there have been two barriers to making it attractive to magnet students.

First, she said there is no transportation provided. Second, she explained the lack of space has made it impossible to accommodate additional students.

Michael Bocchino, New Leb PTA president and outgoing President of the Byram Neighborhood Association said there is a large group of people within the catchment are of New Lebanon school that choose to go elsewhere. Specifically, he said neighborhood students have selected to attend Julian Curtiss School and Hamilton Avenue School as magnet students.

Asked whether she’d seen an increase in the number out of state cars dropping off children at her school, Riccio said she had not, though there had been problems in the past.

“When we looked at potential redistricting to create racial balance a few years ago, versus the plan we have in place now,” she said that concern about out -of-state license plates had been brought up.

“We have an extremely rigorous residency requirement,” she said, but that folks on the eastern side of Greenwich, near Stamford, in particular, North Mianus School families had also mentioned seeing New York plates.

Riccio said every single student is verified every with rigorous paperwork. “They had to have notification, notarized documents, and it was a tiny percentage who were not verified.” She said every student who was verified was entered into a database, and staff now have the extra task of re-verifying anyone whose lease has expired. She said the process of verifying residency has cost the tow $33,000.

There was discussion of all the legitimate reasons New Lebanon students arrive at school with cars having New York license plates. Riccio said she is a resident of New Rochelle, but that she has out of state plates on her car. Other reasons students arrive in cars with New York plates include having divorced parents, relatives or caregivers who drive them to school, or driving the car of an employer. Bocchino said he had followed one parent’s car, only to learn he worked for a taxi company.

One Parent’s Disappointment at Finding a “Segregated” Town

I would like to see more diversity in the town as a whole,” said one parent who described coming to Greenwich from New York City two years ago and finding the Town segregated. She said she had been disappointed that no one wants to address the issue. “We just talk. The Board of Education just talks. There were several proposals that could have come about…Redistricting could have solved the issue,” she said.

Riccio reflected on the process of addressing the mandate to address racial imbalance at New Lebanon School.

“It was painful. If you went to the BOE meetings, it was painful,” Riccio said. “I was very disappointed in the kind of rhetoric that occurred at those meetings…. I love diversity. I think the world is diverse and that’s what needs to happen, but not many of your fellow citizens felt that way. They want the neighborhoods to be exactly the way they were.

“And, there was no political will to make it happen…We had to come up with Plan B…and I agree with you that I don’t know if it is going to resolve the issue. It is a well thought out plan to do the best we can.”