Byram Neighborhood Association president Mike Bocchino said his goodbyes and thank yous at the close of Wednesday night’s meeting, attended by about 50 residents at St Paul’s Church in Byram. 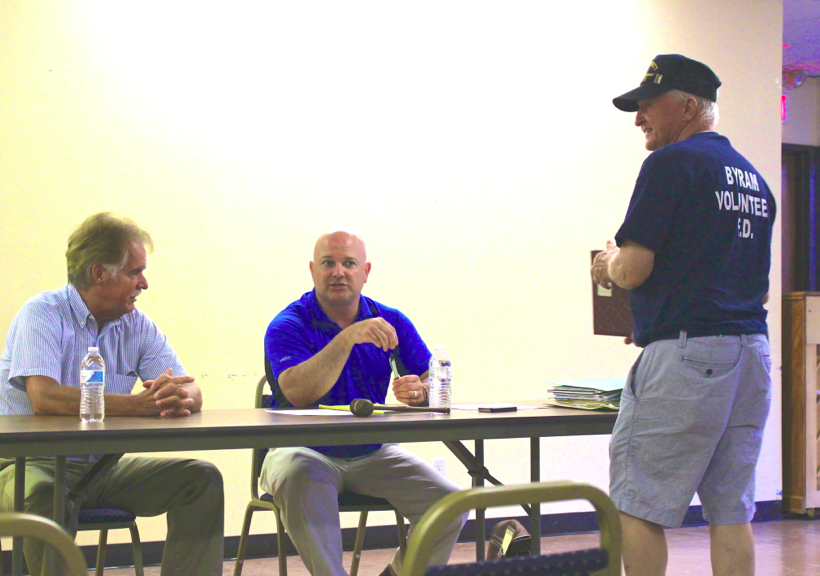 Mike Bocchino, center, the outgoing president of the Byram Neighborhood Association with BNA vp Bob McKnight and Ed Fox, of Byram Volunteer Fire Dept.  Bocchino  said he’d enjoyed his 11 years, but that he is  running as a Republican for State Representative in the 1510th district. He seeks the office of Steve Walko, who is not running for another term. Bocchino, mentioned that his opponent in the upcoming election is Democrat, Jill Oberlander, who he acknowledged was present at the meeting. Credit: Leslie Yager

“It’s time to turn the page for me,” Bocchino said, noting that after 11 years he had thrown his hat into the ring for State Rep. Current state Rep., Steve Walko (R-150), is not running for another term. Bocchino acknowledged his Democratic opponent for in the November election, Jill Oberlander, was present at the meeting.

Bocchino has also served as PTA president of New Lebanon School at a critical time when crowding became an issue, planning a satellite campus was researched, and pressing for construction of a new, more spacious school. Currently the Town has approved a feasibility study for a “new” New Lebanon School.

Bocchino recited several accomplishments of the BNA during his tenure. He said the BNA had established a new residential parking permit program, dedicated a field for a wonderful coach, raised funds for worthy programs, and “solved a lot of issues and a lot of problems and concerns that we had.” Bocchino described the completion of the Byram master plan as “one of the biggest feathers in our cap,” adding that it took about 12 years to complete and have it adopted by Planning and Zoning.

As for his replacement as president of the BNA, Bocchino said, “We need stern, strong leadership in someone to take over this position. These neighborhood associations are incredibly important…It makes a difference.”

The majority of the 2-1/2 hour meeting was spent discussing New Lebanon School’s arrangement to have their two kindergarten classes taught across a busy street at the Byram Archibald Neighborhood Center, which digressed to general traffic issues, and issues related to proximity to the state line.

Byram Traffic Calming Measures
Bocchino said the Board of Education and the New Lebanon community had been working with the Greenwich Police on traffic calming measures for Delavan Ave, with consideration to the kindergarten being housed temporarily at BANC, which is right on that busy road.

Bocchino said it was good news that a second crosswalk had been added on at the intersection of Delavan Ave and Beech Street (in addition to the crosswalk at Mead St.) He added that Greenwich  Police are scheduled to do traffic counts at the intersection of Chestnut Street and Delavan Ave the week of Sept 8, once school traffic patterns normalize. The goal will be to check the volumes of traffic due to the change in conditions.

“Once we have these counts, we’ll review all the data to determine of additional signage, pavement markings and other measures are necessary. Many of these changes will require approval by the legal traffic authority of the Town and state traffic administration,” he said, though enforcement in the area has already been enhanced.

Enforcement and Expanded School Zone
“They did pull over a lot of people on Tuesday, the opening day of school,” Bocchino reported. He mentioned that the police are considering adding a second crossing guard who would be stationed over by veterans hall, which is located at 300 Delavan Ave.

“In doing so, we then will be able to increase all of our signage, all of our crosswalks, all of our staffing for the roadway, which would create  a safer environment for those kids. That, in turn would create a safer neighborhood for all of us.” – Mike Bocchino, outgoing president of the Byram Neighborhood Association 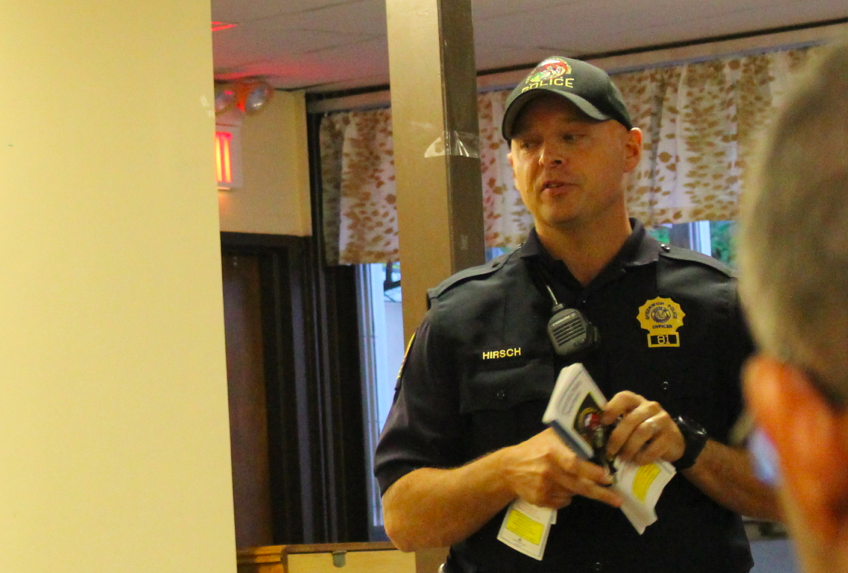 Greenwich Police Officer Keith Hirsch introduced himself and prefaced his Byram-specific remarks by mentioning the opportunity of the upcoming citizen’s police academy, which starts at the end of the summer. The class will have room for 40 students.

Hirsch said that the principal of New Lebanon, Barbara Riccio, has done a great job educating parents about drop-off procedures, with the school operating a satellite location for its 42 kindergarten students across a busy roadway. He said that from a police point of view, it was also important to educate the drivers who regularly pass through the New Lebanon school zone about slowing down.

Greenwich Police Officer Hirsch talked about DUI arrests in Byram. Hirsch said that last year there were 78 DUI arrests in Greenwich and 33 were in Byram. He said that since bars are open later in New York – last call at Sam’s Bar and Grill just over the bridge on Mill Street is at 3:30am – when police have an extra patrol, they are sent to the western end of town.

Hirsch talked about a rash of car break-ins that occurred in Byram on Aug 22, and said two suspects had been arrested for a similar spate of break-ins in Pemberwick on Aug 24.

Noting that all the cars involved had been unlocked, Hirsch reminded residents to keep their cars locked. Further, on the theme of crimes-of-opportunity, he added that one car had its key left in the ignition and was stolen.

When residents voiced frustration over graffiti in the Byram area, Hirsch encouraged them to contact him by email at [email protected] or at (2023) 618-8305. He said there is a system in place that results in graffiti being removed quickly.

New Lebanon School Principal Barbara Riccio talked about the transition to the operating New Leb on both sides of Delavan Ave, the context of operating as a magnet school, and the feasibility study approved by the Town for a “new” New Leb school.

Riccio said that with two school days completed, that even though there are 40 kindergartners, roughly just 20 cars arrive each day to drop off kindergartners, the remainder being walked to school. She said that staff escorted children from the cars and into the building and that parents are encouraged to drive away without lingering. She added that there is a full 1/2 hour drop off window, so overall the drop-off situation is running smoothly.

In the afternoon, the kindergartners are bused the short distance from BANC across the street to New Lebanon School for lunch and specials, and are dismissed there as well.

Toward the end of Wednesday’s BNA meeting, which ran well over two hours, Bocchino noted that although the meeting was well attended, the numbers had dwindled at the end. Rather than hold the election of officers, he promised to send out a notification of a future date to hold the elections, which most importantly would include his replacement as President.