At Thursday night’s Board of Education meeting, New Lebanon School principal, Barbara Riccio delivered a welcome to what she described as a “tiny place” where students bring vibrant culture and traditions to the community despite many of their parents’ struggles to make ends meet. 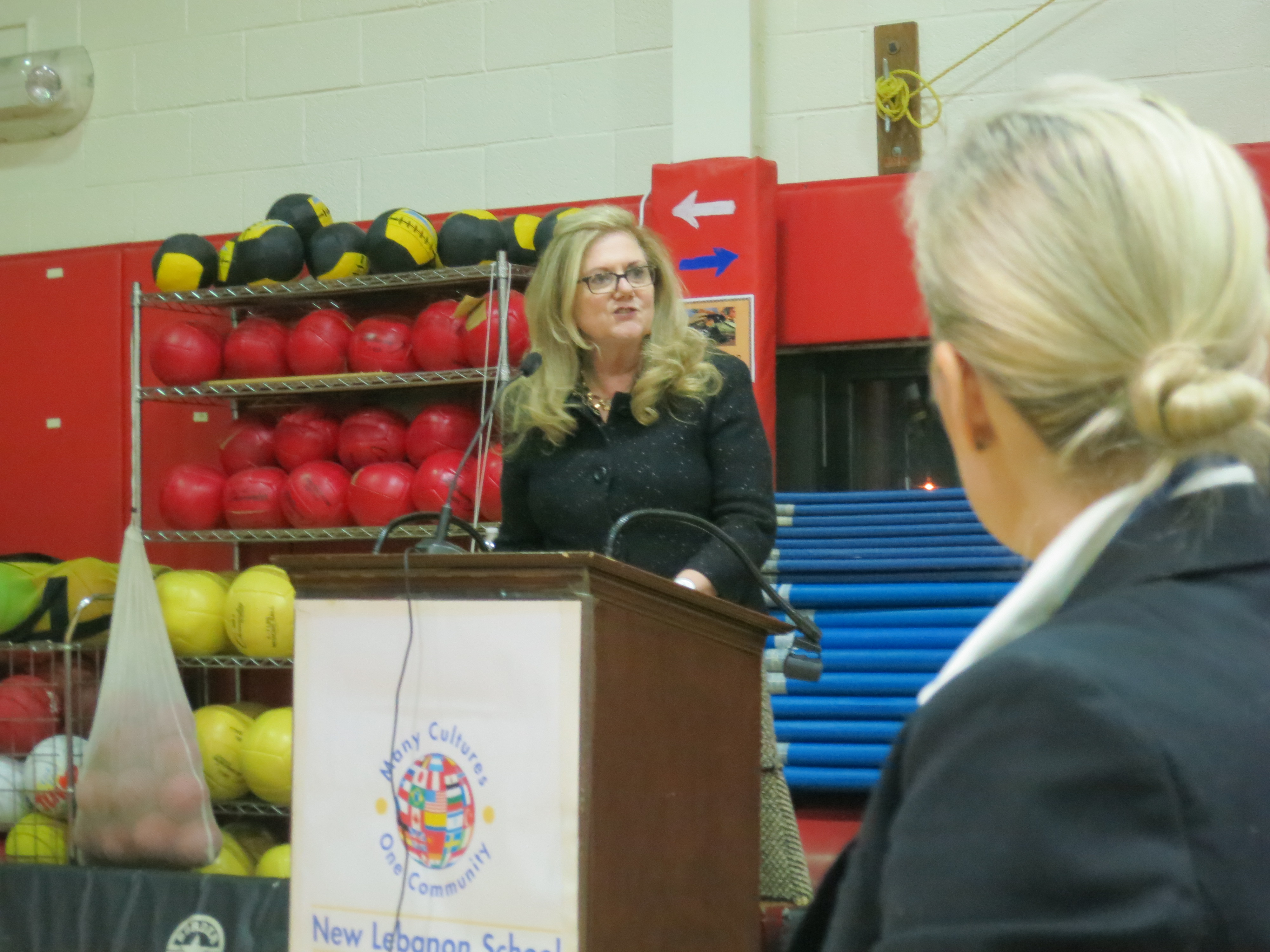 Student government president of GHS, Guillermo Perez, who himself attended New Lebanon School, addressed the board and audience in Spanish before switching to English.

“This school seemed a lot bigger,” Perez said describing the hallways as so small compared to his memories. Going out of his way to express gratitude for his former teachers, Perez added, “This school is where I learned to make friends, to be compassionate.  … This school is really something special.” 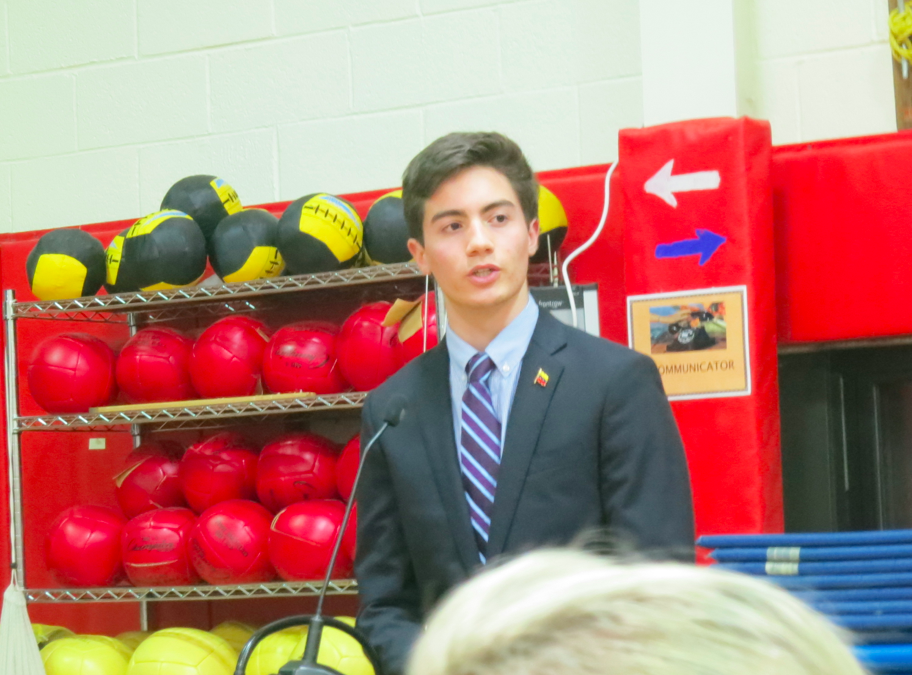 Superintendent McKersie later praised Perez and his fellow GHS senior, Henry Ricciardi, mentioning that Riccardi has been accepted to Boston College and Perez has been awarded a full scholarship to Syracuse University. 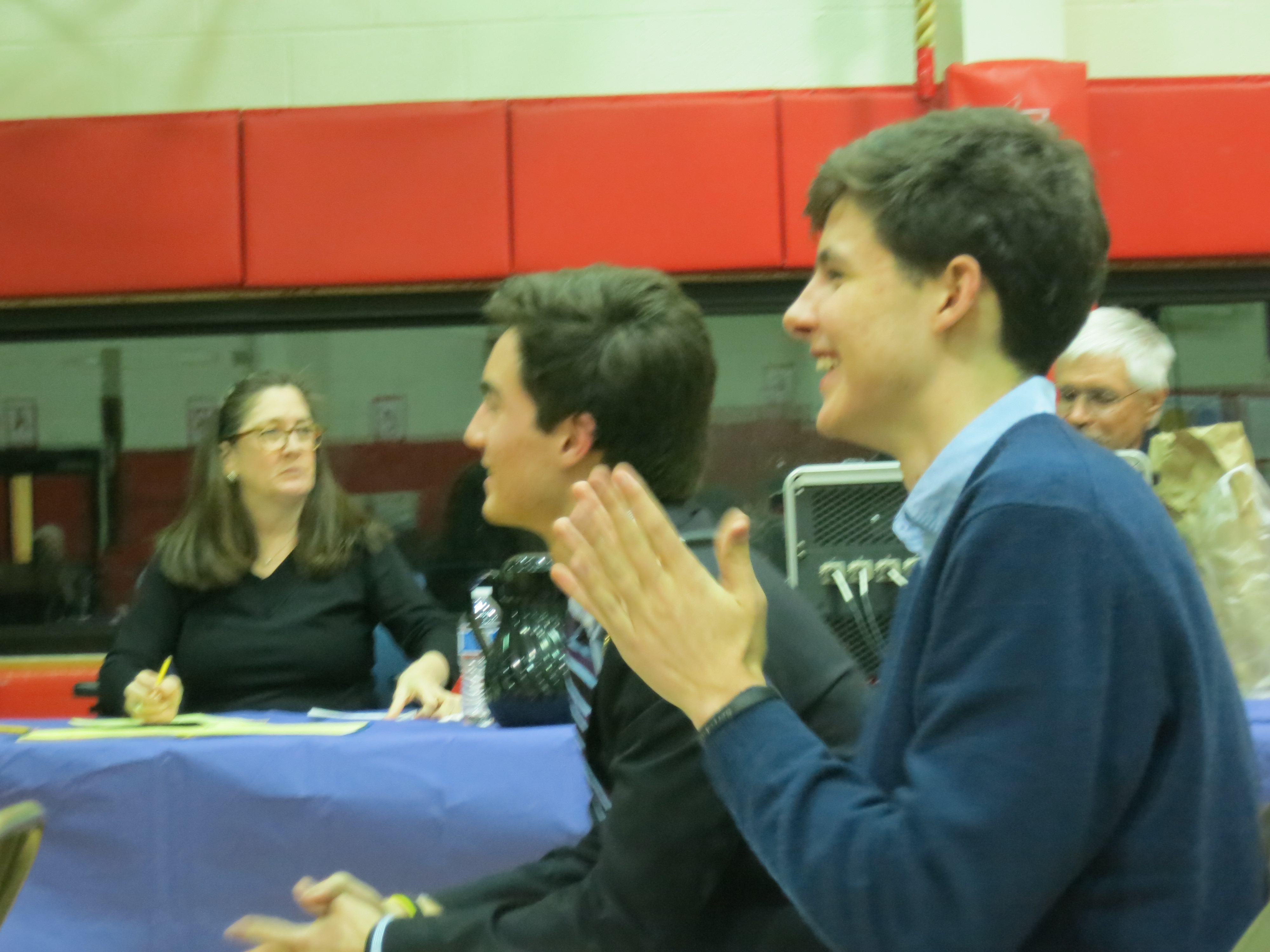 GHS seniors Guillermo Perez and Henry Ricciardi at New Lebanon School for the February Board of Education meeting.

BANC Satellite Campus for Kindergarten in 2014-2015
Once the GHS students delivered their remarks, there was discussion of options to make up snow days and an update on MISA, before focus turned to the issue of the day: annexing space at the Byram Archibald Neighborhood Center (BANC) to house New Lebanon School’s kindergarten in 2014-2015 school year in order to ameliorate overcrowding.

Several New Lebanon parents took turns at the microphone expressing frustration with both long-term solutions for the school and the short-term BANC annex solution.

“The short term solution has to be just that. Short. Start studying long term plans now… We can’t wait for other town capital projects to be completed before starting to implement New Lebanon’s long term solution,” said Clare Kilgallen. “We’re talking about basic, everyday educational space. This is not enrichment, nice to have situation. We don’t have enough space for educational instruction, a proper size cafeteria, or a media center, a computer room, and the list goes on.”

“Our backs are against the wall. We have no other alternative,” said Michael Bocchino, President of the New Lebanon PTA of the BANC annex solution. 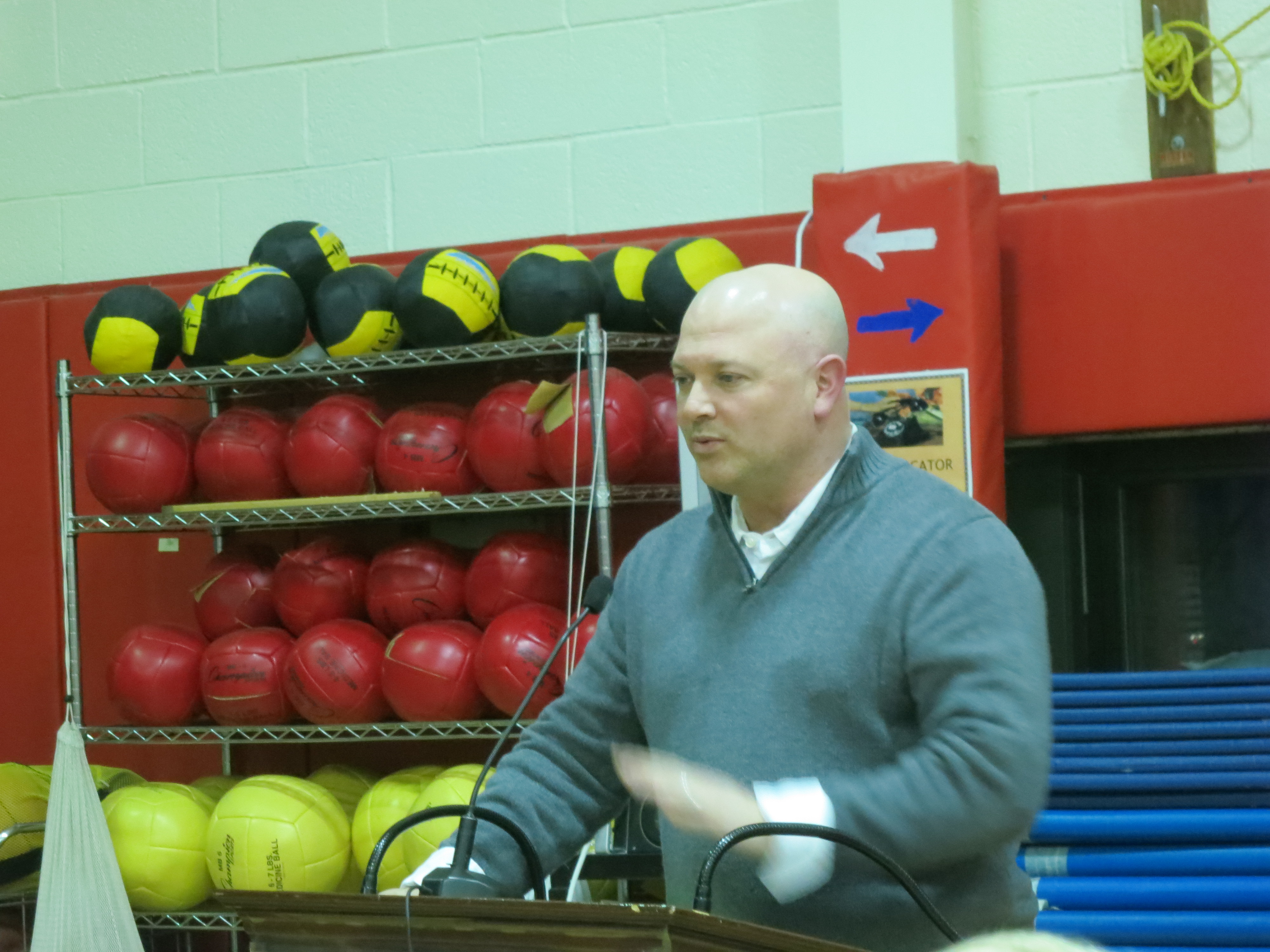 “But to try to keep our kids associated with this school, that’s a heck of a bad position to be in. To send your kids for a half a day to another location and bring them, it’s horrible. If we had acted upon this three years ago when it was told to the board we wouldn’t be in this situation,” said Bocchino. “If you do anything on the footprint, you’re going to displace everybody. The optimal solution is to build a new school down there, let the kids stay here. When that school is open, the kids go in, you have the option of keeping this beautiful school to make it a pre-K or knock it down and make parking.”

Other New Lebanon parents lamented that the school has a low priority level on magnet school applications and expressed frustration at the the lack of options for parents of incoming kindergarteners beyond accepting the split campus solution.

“I understand there is concern that there might be a mass exodus… The option should be made available to parents willing to transport their children to another school,” said Kat Jacobs, to a round of applause.

“It’s horrifying crossing Delavan Avenue. The plan is pretty dismal for us,” said New Lebanon parent Lucy von Brachel. “All things being equal, my family would have no desire to leave this school. But, all things are not equal… I think a lot of families, under these circumstances, would like another alternative. No other school in this district has to deal with their kindergarteners at another facility for a half a day. No other school has as little space per child. No one else has as wide an achievement gap, as much crowding, as big a racial imbalance as we have…We’re seeking alternatives.” 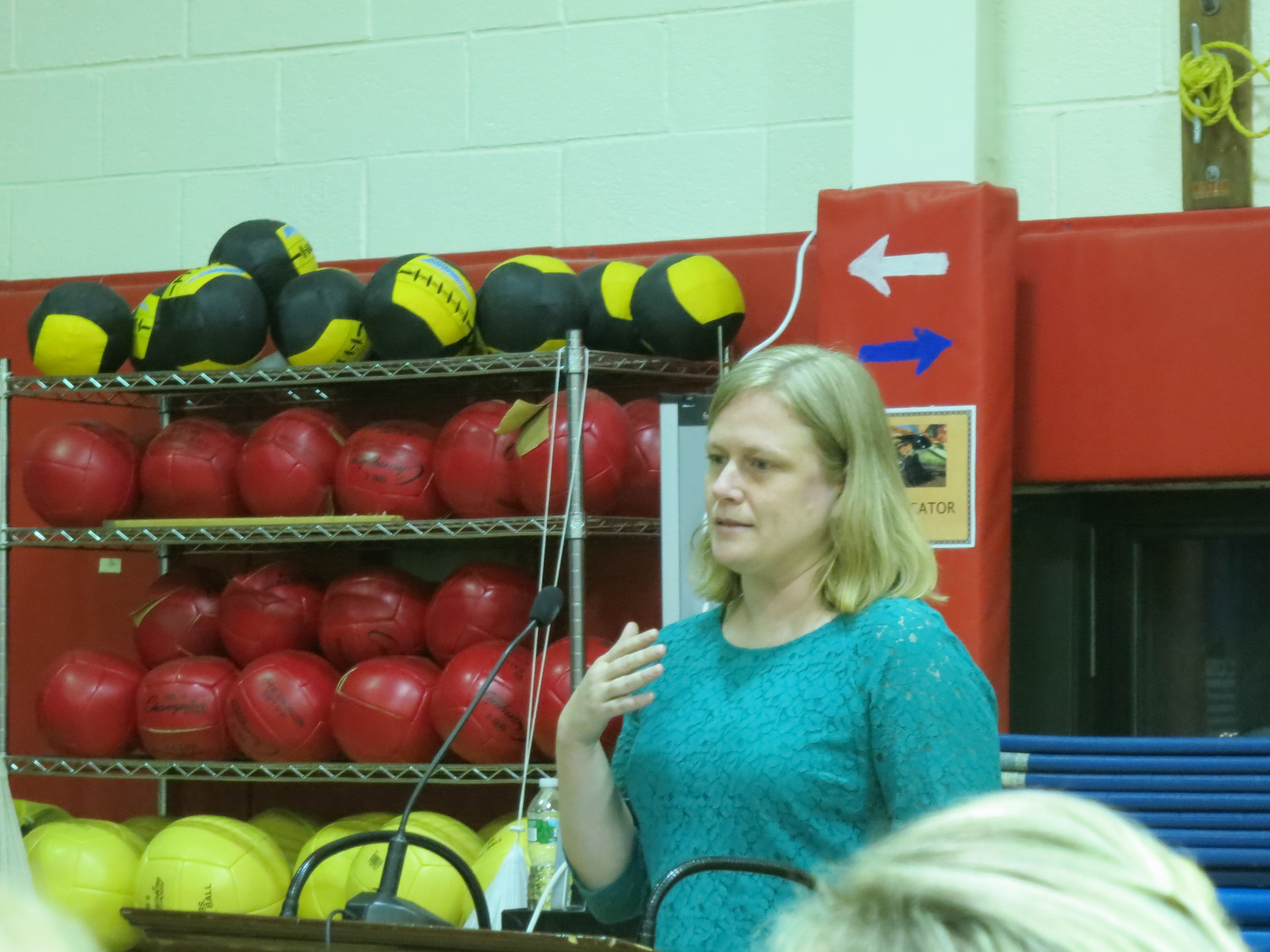 New Lebanon School parent Lucy von Brachel addresses members of the Board of Education at the February meeting.

“The only alternative for us is the magnet lottery which is weighted in favor to students in other catchment areas,” von Brachel continued. “When children elsewhere in the district have a greater chance at choice, I have to speak out. I implore you to eliminate the prioritization of the catchment are from the lottery altogether.”

McKersie said using BANC as an extension of the New Lebanon campus would free up three classrooms in the overcrowded school. “At 12:15, they will be bused,” McKersie said. “Most of us could hit BANC with a baseball from here, but we’re still going to bus them because we don’t want children, kindergarteners, having to walk that distance. They’ll be bused up here for the second part of the day, all their specials, their after-school programs and they would be dismissed from here.” 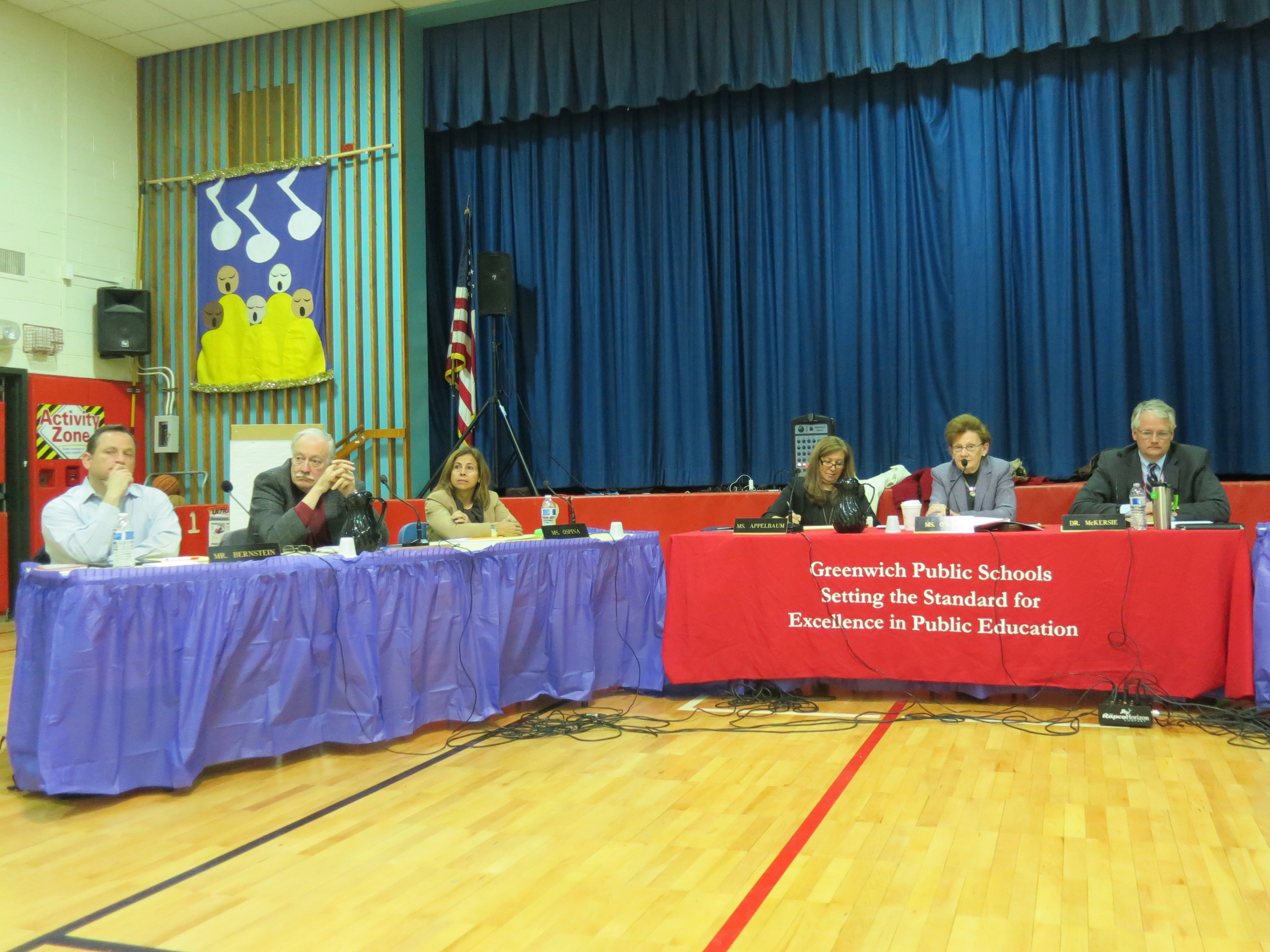 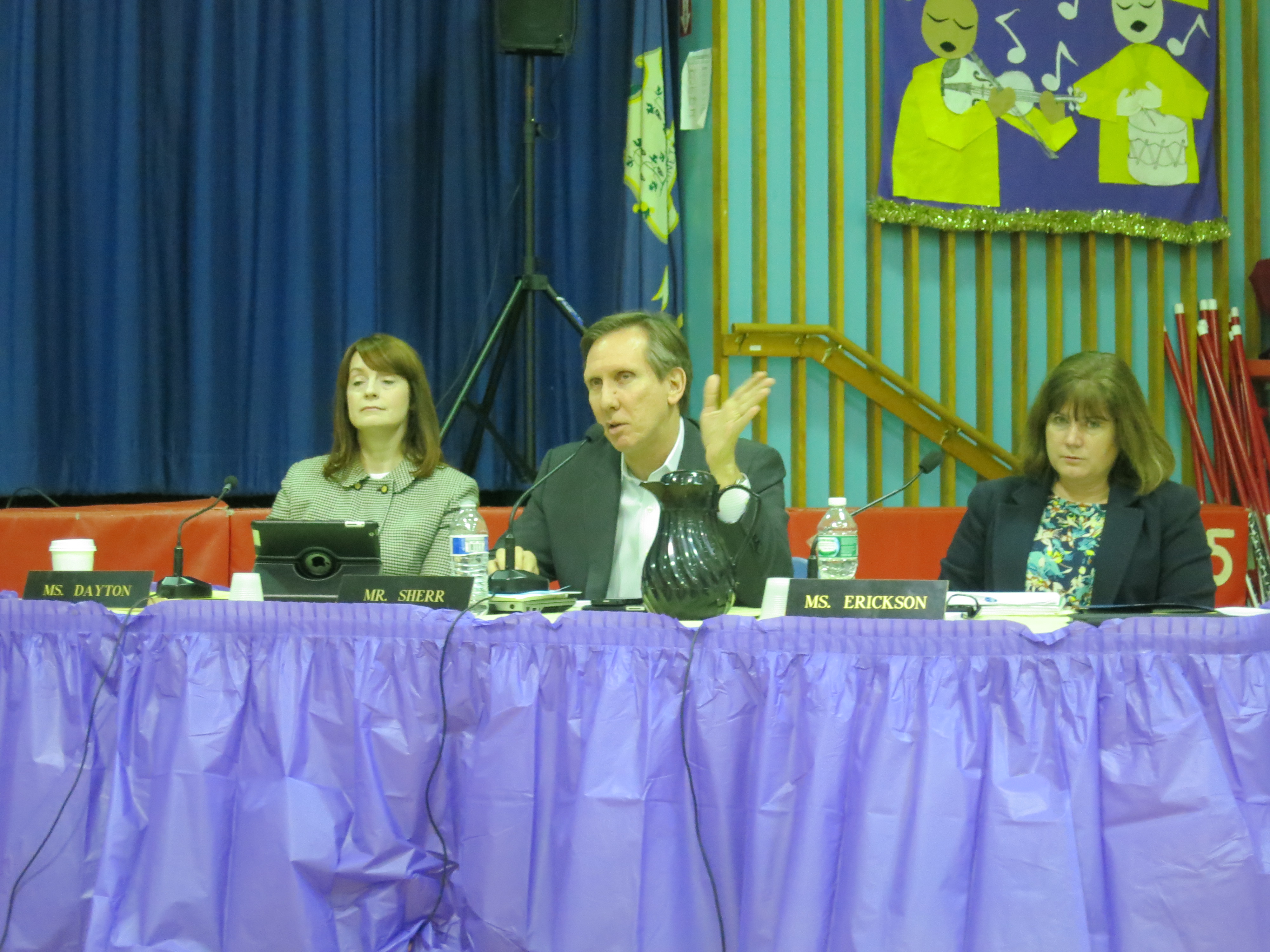 Peter Sherr described the BANC plan is “the best of bad choices,” but said he was confused because “last year I heard from the PTA president here that there were more than 30 kids in the school who probably didn’t have the right to be in the school.”

“I never said that,” Bocchino interjected from the audience.

After some discussion, Sherr proposed a motion that the BOE urge the Superintendent to modify kindergarten school assignment rules for students in the New Lebanon catchment area in order that they might be able to send their children to another elementary school with capacity.

After some back and forth among Board members, a vote was taken. Dayton and von Braun joined Sherr to vote in favor of the motion, while Bernstein, Erickson, Appelbaum and O’Neill opposed. Adriana Ospina abstained, and the motion failed.

Subsequently Ospina moved that the Board urge McKersie to alter the district’s lottery rules in order that New Lebanon students have the same priority as those from schools that do not offer magnet programs. The motion passed.

According to the District website, the magnet application deadline for applications is Feb 28 and the “Centralized magnet school lottery” is scheduled for Mar 7.