The Freemason’s square and compasses, visible in the upstairs window of Acacia Lodge No. 85’s current home at BANC is familiar, though not many people are versed in its origins.

Andrew Melillo, the Worshipful Master for Acacia Lodge this year explained that the fraternity has a proven history dating back to 13th century stone guilds, but that, “Tradition and Lore take us back to the ancients and their mystery schools.” 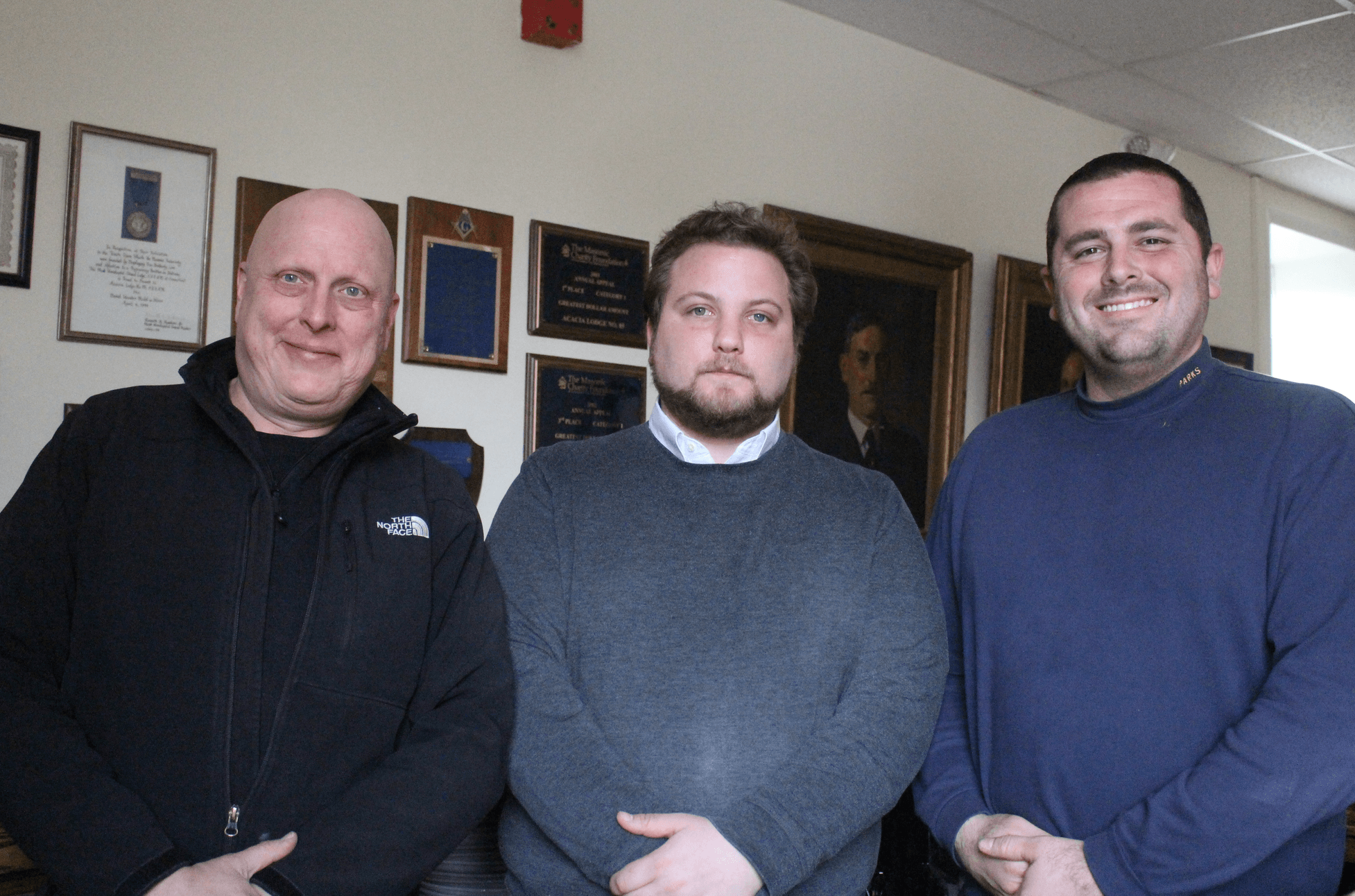 In Greenwich membership has waxed and waned, peaking at a roster of about 500 back when the lodge was housed in the columned Masonic Temple at 28 Havemeyer Place. Today the lodge has a membership of about 50 men. Their mission, as always, is charitable, fraternal, educational, social and character-building. All good Men are welcome. 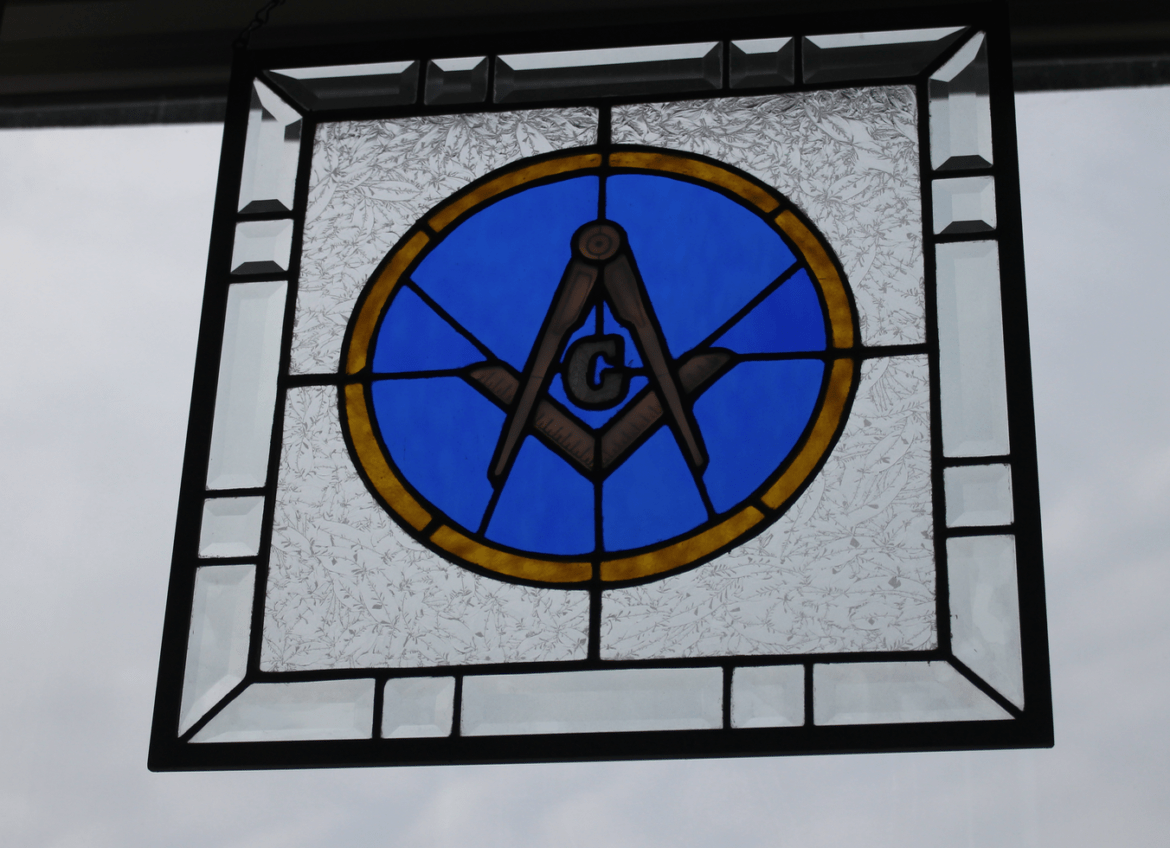 The Freemason’s square and compasses in the window of BANC where Acacia Lodge No 85 have their lodge upstairs. Photo: Leslie Yager

“We’re not a secret society,” Melillo said. “We’re a society with secrets.”

Melillo explained that in medieval times when stone-working guild members proved themselves as masters of their craft, they were allowed to travel and work and receive wages as such.

“They would show themselves to be true Master Masons by certain ‘tokens’ and words,’” he continued. “It’s an understatement to say we’re the oldest fraternity in the world,” he said.

The Masonic Order’s history spans centuries, and among their fold have been admitted men of great stature whether they be Father George Washington, Teddy Roosevelt, John Glenn or the Duke of Kent who is the current Grand Master of the United Grand Lodge of England and the grandson of King George V.

In Greenwich, the members of Acacia Lodge have abundant photos and documents chronicling their history. In fact, inside BANC on Delavan Ave, the lodge is something of a living museum.

Before the Masons in Greenwich had their own lodge, they traveled to Union Lodge No 5 in Stamford, though early records show that its prominent officers were Greenwich men including Shadrach Mead, William Bush, John Willis, Jabez Fitch, Elkanah Mead, Israel Knapp, Richard Sackett, Jeremiah Mead and John Hobby.

The members of Union No 5 from Greenwich first sought to establish
their own lodge in 1827, but were declined by the Grand Lodge in Hartford. The aspiration to establish their own lodge was not fulfilled for 30 years, in part due to the “Morgan affair,” an incident in Batavia, New York in which William Morgan posed as a Mason and wrote an unauthorized book.

“Morgan went missing and was presumed dead,” Melillo said. “Everyone blamed the Masons.”

The Morgan affair led to tenacious anti-Masonic sentiment that went on to spawn an anti-Masonic political party, which was a third party created on the single issue of opposition to Freemasonry.

In 1857 and thirty years after the sad Morgan Affair, the Grand Lodge of Connecticut happily approved Greenwich’s petition to establish their own lodge.” Luke Adolphus Lockwood was instrumental in securing the charter for Acacia. In fact, the most prominent members of the first years of Acacia Lodge were of the Lockwood family of Riverside and it was from Luke’s efforts that Acacia owes its very existence.

Acacia Lodge held its first Communication in 1857 in the attic of the old Cos Cob School house, which was located on the north side of Putnam Ave on the hill west of Cos Cob’s Hub, (between Sweet Lisa’s and the former Friendly’s). The lodge occupied this room for about a year.

The location, however, was not ideal. According to the History of Masonry in Greenwich 1763-1926 by Frederick A Hubbard,  “Cos Cob at that time was the end of a long, crooked, muddy, and hilly road remote from Horseneck.”

In 1858, the Masons took up residence in the newly constructed Held Building on Greenwich Avenue after deciding to leave the old Cos Cob school house. The Held building is shown on the still dirt-road of Greenwich Avenue photo circa May 1878. The annual rent for the upstairs space was $75, and the lease was for ten years, which was subsequently renewed for an additional ten years.

At the time, Greenwich Avenue did not have many businesses, as the commercial hub converged mainly on the intersection of Putnam Ave and Sherwood Place, then called Mechanic Street. 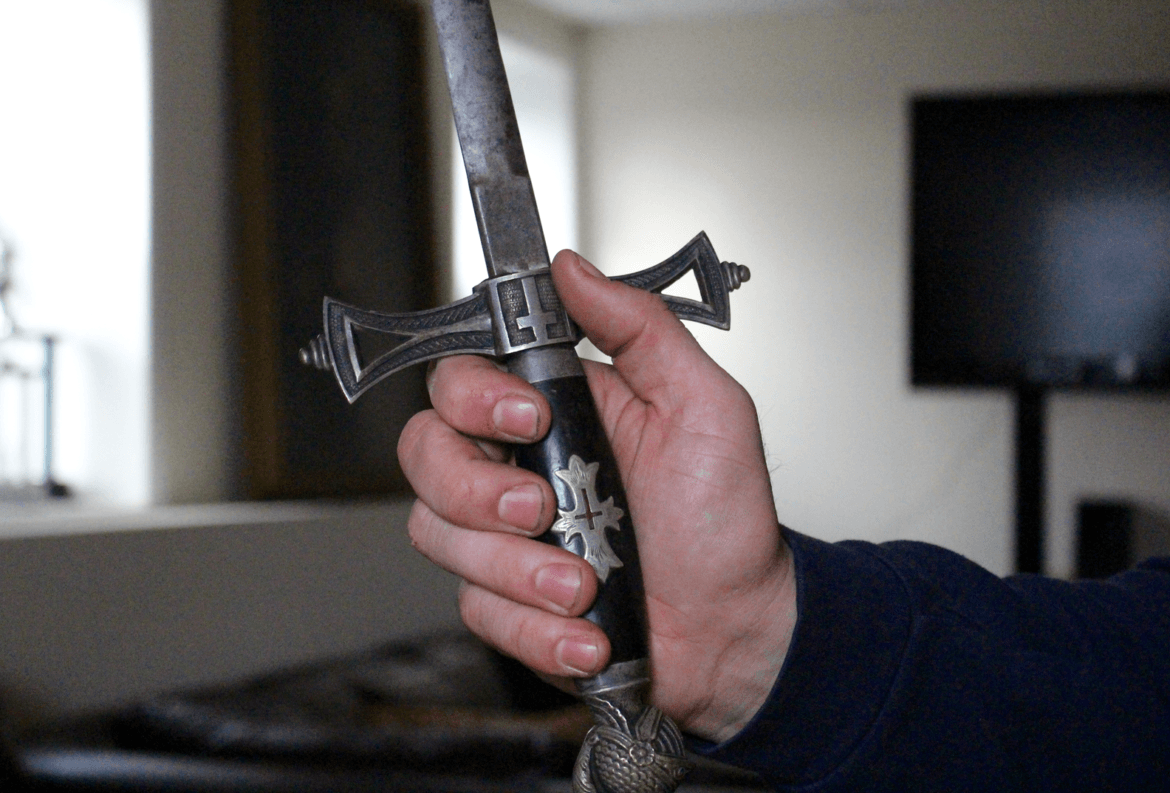 Mike Sabia shows off a sword that a Tyler would used to guard the door of the lodge during meetings. Photo: Leslie Yager

According to Frederick A Hubbard’s history, “There was no calling off a communication in July and August, but John H. Merritt, who served as the Tyler, did everything in his power to make the brethren comfortable. Homemade root beer in stone jugs and slices of watermelon properly iced were served when the brethren were called from labor to refreshment.”

Melillo said that William White, the first Tyler of Acacia, instead of being given a sword, used his own war-torn sword from the Mexican-American War. “He would on hot summer nights chop watermelon over ice using his veteran’s war sword.”

According to Hubbard’s history, when the lodge met in the Held building, the Tyler would cook up a cauldron of clam soup. “In the winter, when the Tyler stirred the clam soup in a massive iron pot, the aroma of those succulent shell fish permeated the atmosphere for a considerable distance,” Hubbard wrote. “One of the old members who was blessed with a good appetite on one occasion suggested that the aroma of those clams was so enticing that it probably caused accessions to the lodge.” 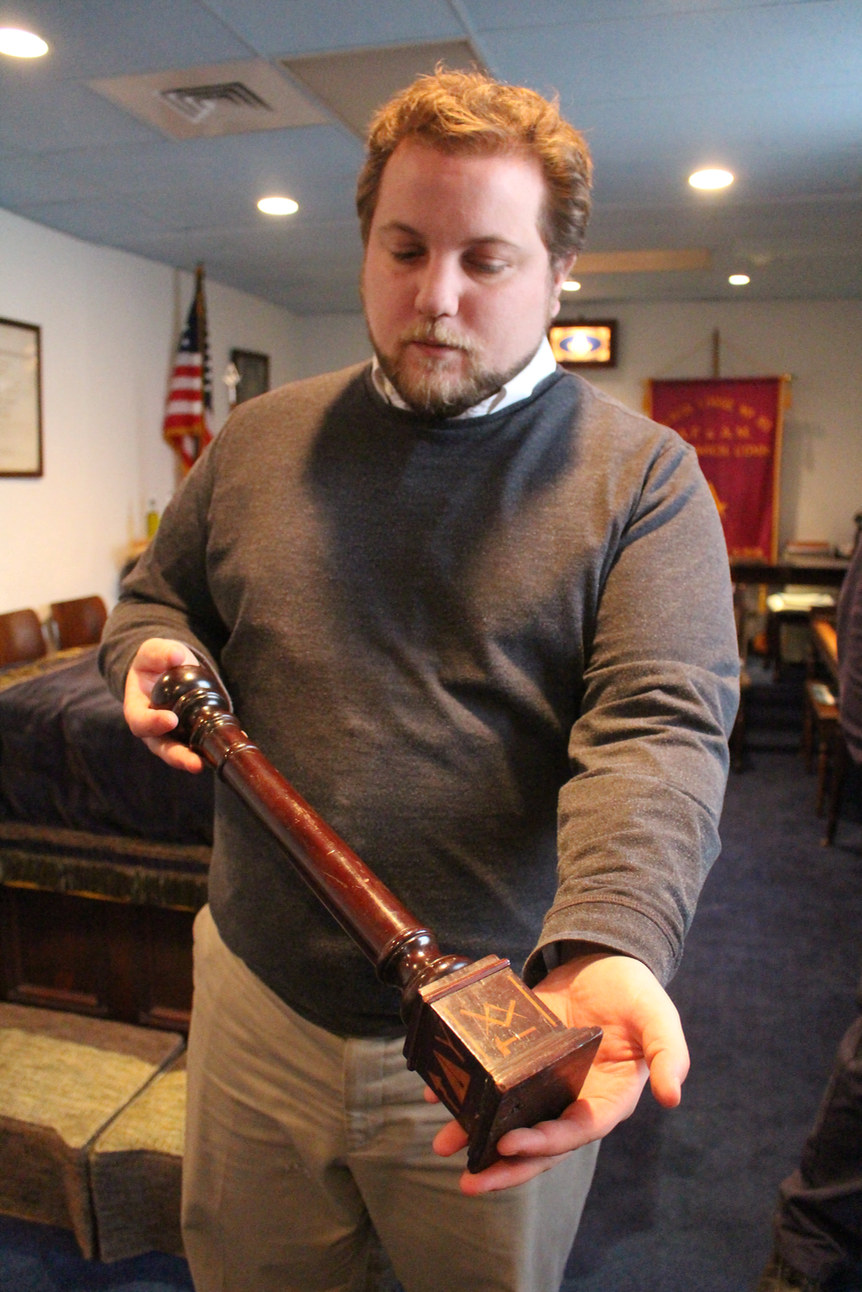 Andrew Melillo shared a pair of 200 year-old mahogany columns, which are stilled used as the markers during meetings. Photo: Leslie Yager

Andrew Melillo shared one of a pair of 200 year-old mahogany columns, which are used as markers, placed in certain positions by the lodge’s Senior warden and Junior warden of the lodge to indicate a meeting is in session.

In Greenwich, the pair of columns might have been lost forever if not for one little boy’s exploration under the eaves of Putnam Cottage, which in the 1800’s was called Tracey Cottage. Tracey Cottage belonged to Francis Tomes who rented it to Frederick Mead after moving into a newly built house in 1861.

According to Frederick A. Hubbard’s history, Mead’s son, Frederick Mead Junior, “found concealed under the eaves of the ancient house, two columns used at the stations of the Senior and Junior Wardens of a Masonic lodge.”

As he was not a Mason, Mr. Mead, “… did not conceive the proper color for the decoration of these quaint articles of lodge paraphernalia, and tied a red ribbon about them and set them on his mantel as ornaments.”

Frederick Mead Jr hired Stephen Sillick, an enthusiastic member of Acacia Lodge to do carpentry work about the house into which he moved from. Mr. Mead had taken the beribboned columns with him. Sillick was so excited to see the columns that Mr. Mead gave them to him and he presented them to the lodge.

From 1878 until 1920, Acacia Lodge operated out of rented quarters in the Isaac Mead building, known today as the Pickwick building. 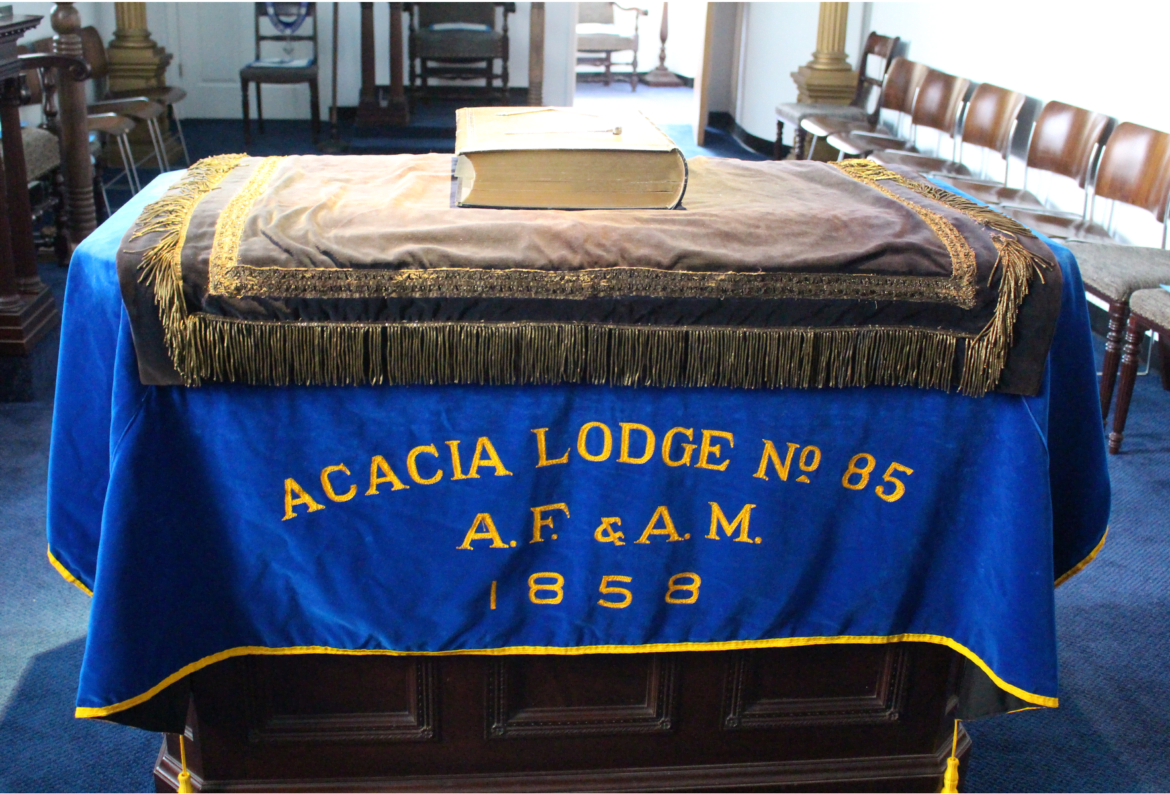 A Temple of Their Own: 28 Havemeyer Place
When Acacia Lodge’s membership peaked at around 500, they finally built their own temple at 28 Havemeyer Place. Construction on the enormous columned temple took place from 1922 to 1923.

“The laying of the corner stone October 14, 1922 was probably the largest attended and the most interesting Masonic occasion the State had ever known, and it is quite probable that New England has never seen such a great Masonic gathering, wrote Hubbard. The cornerstone, a block of Vermont marble, weighed in at 1,750 lbs.

A recess cut in the marble cornerstone was the receptacle for a sealed silver box. The time capsule included a program of the day’s events, photographs of the builder and architects, photos of the first officers  Acacia Lodge 85 including Luke A. Lockwood, story of the building of the temple and the land, and copy of the dedication service of the memorial windows in Christ Church, a copy of the New York Times, coins of the country and an American flag. 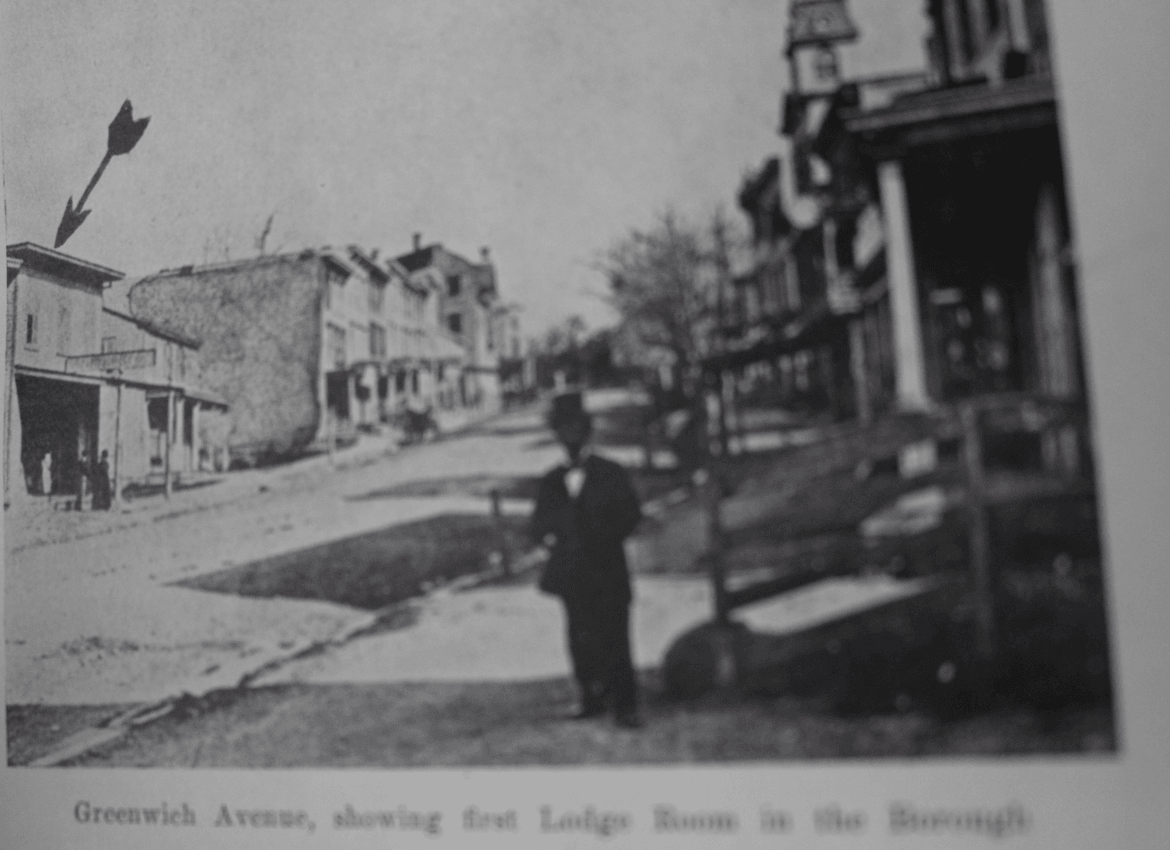 Acacia Lodge No 85 was housed upstairs in The Held Building on Greenwich Avenue for 20 years. They subsequently moved to the top of the Avenue, taking up residence in the Isaac L Mead building, now known as  Pickwick Corner.

The structure was dedicated on Oct 15, 1923 in the presence of 300 Masons. The event featured remarks from Brother Homer S. Cummings of Union Lodge No. 5 in Stamford, who spoke on the subject of “meeting on the level,” which refers to a mason’s tool, but also is used informally to mean honest and truthful conduct before men.

Back in the 1920s, when he penned his history of the Masons in Greenwich to date, Hubbard wrote, “The click of billiard balls is heard and there is merry laughter or profound and sedate arguments over public affairs in the cheerful club room.” 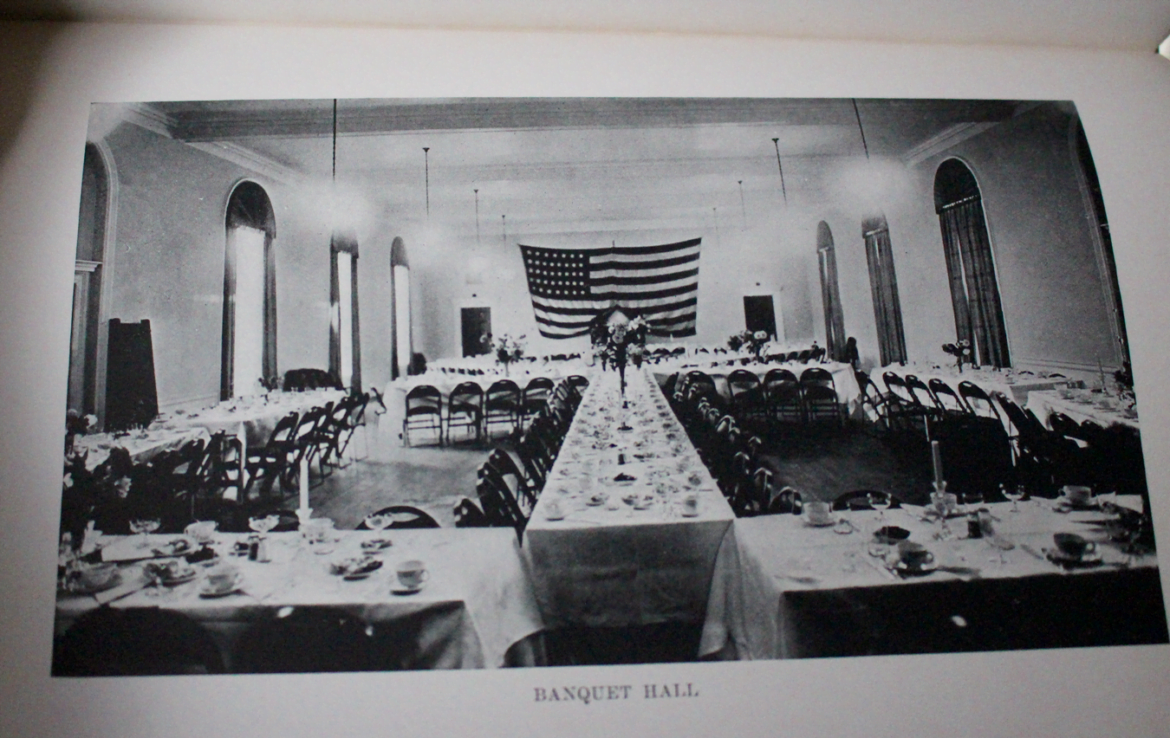 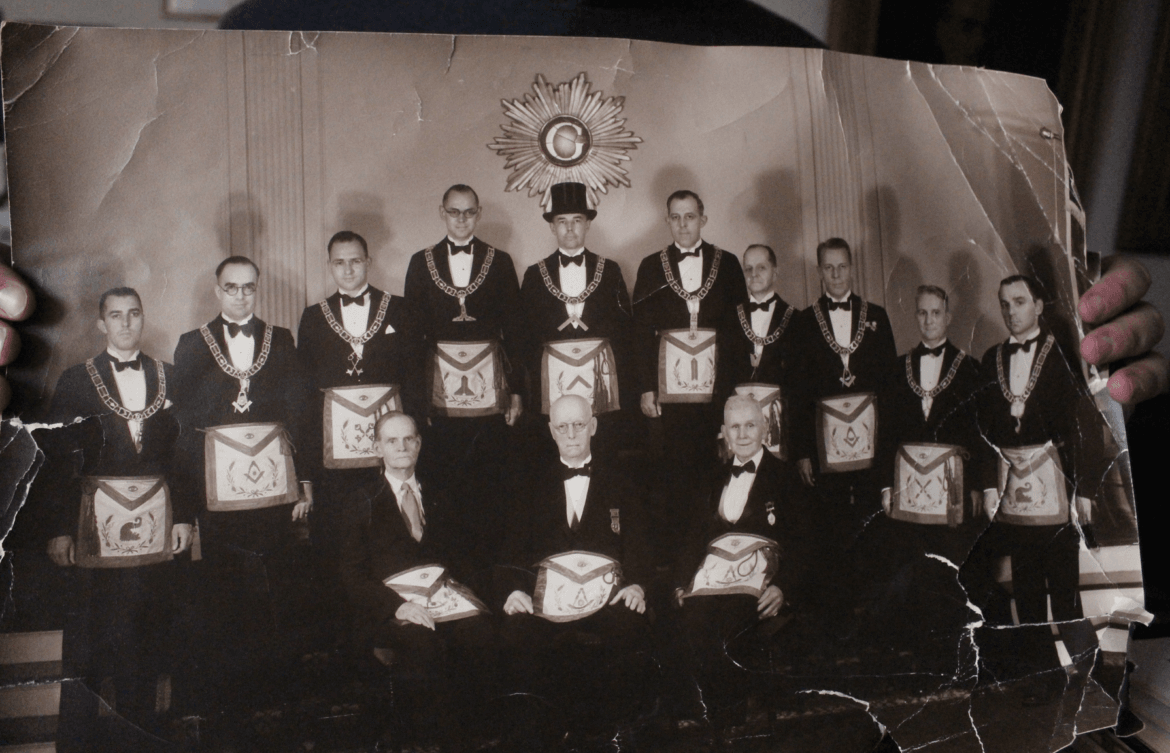 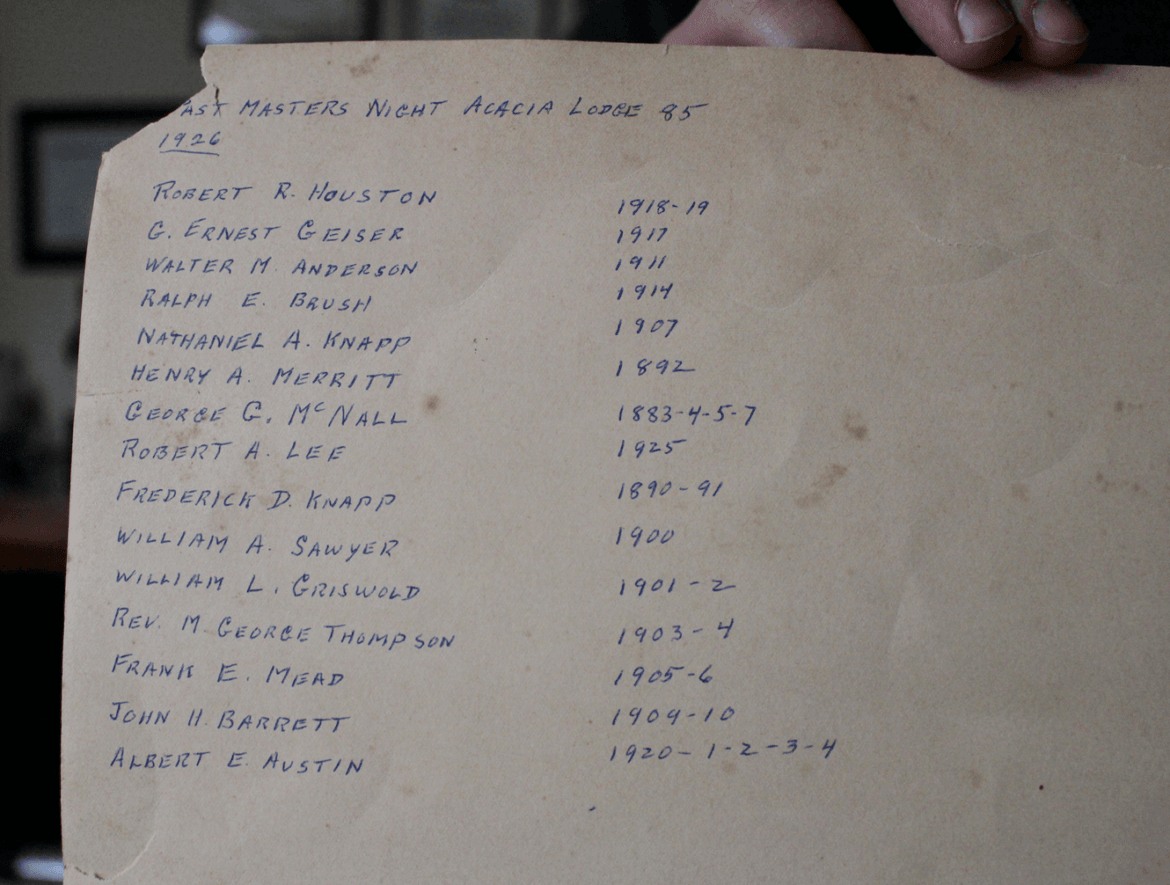 The approximate cost of the temple, including land, was $206,000, which Frederick A Hubbard described as a staggering proposition.

Today, the building, most recently occupied by Wells Fargo, is undergoing renovations to become retail space. The building was sold from Wells Fargo Bank, NA to SC 28HP LLC on Nov. 16, 2015 for $13,005,000.

According to Mr. Melillo, Acacia Lodge sold the building at 28 Havemeyer in 1948. From there they moved to Byram Archibald Neighborhood Center on Delavan Ave. The lodge though sold that building in 1978 after which they moved to join the Masons at Ivanhoe Lodge No. 107 in Darien; yet they returned in 2008 to the BANC, where they continue to meet the second and fourth Tuesdays of each month.

They are proud to continue their great work in town whether by sponsoring a sport’s team at the Boys and Girls Club, donate a $2,000 Scholarship in the name of their late Brother David N. Theis, as well as commit to funds to the restoration of Knapp’s Tavern to countless other institutions and people throughout town who are in need of help.

“After all that is what our Order is here to do, to help those who are bound to us by solemn and irrevocable obligations – as well as those who recognize and support those timeless values of our Order which are founded on Faith, Hope and Charity.”