The GHS auditorium foyer was a hive of activity on Thursday, with about 20 tables manned by local non-profits who fell under the broad theme of “health.” 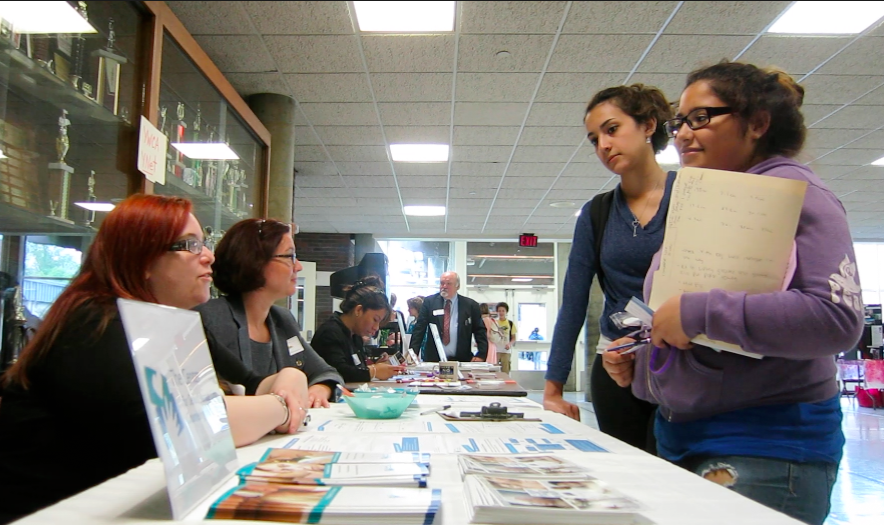 “Once they’re trained they can become certified sexual assault crisis advocate and work the 24/7 hotline. They do it from home on their cell phones,” she said. “Volunteers take a 35 hour training course. There’s always a staff person on backup on the hotline,” Strother added. “We provide basic crisis intervention for callers going through a hard time. Some are having PTSD flashbacks.”

Strother said that after an assault, “We sit through them with a rape kit examination, explain what’s going to happen. Give them all the information for STD testing. We’ll be there with them in the police station.”

Strother said that one of five people with HIV don’t know they have it. She said that with sexual assault, some victims wind up with STIs — some treatable and some incurable — which is a double-whammy. 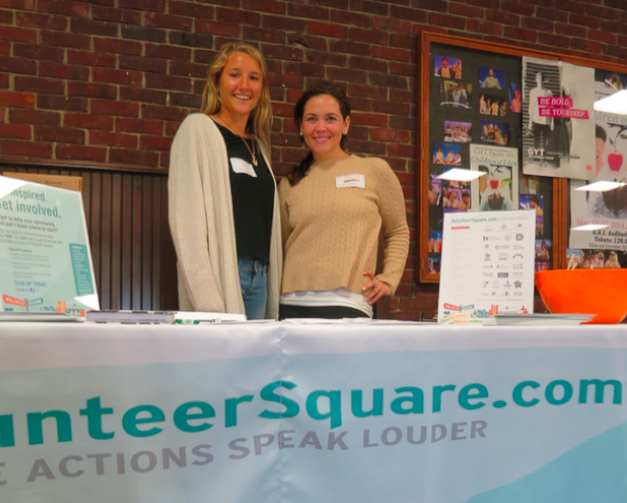 Volunteering is good for the mind and body, said Rachel Reese of VolunteerSquare.com.

Reese and intern, Jackie Brokaw from Darien High School, fielded questions about volunteer opportunities at local non-profits. “It’s important for us to make it easy for kids to connect with local non-profits,” Reese said.

Tom Mahoney explained that the Venus Clinic, located on the third floor of Greenwich Town Hall is a 100% confidential and non-judgmental service available with no appointment necessary. At Venus Clinic, teens are provided clinical counseling on birth control methods, pregnancy testing and counseling as well as information on how to protect themselves from STDs and HIV.

Venus Clinic is open every Tuesday and Thursday from 2:00pm to 5:00pm and no appointment is necessary. Teens are free to call with questions about their bodies, sexuality concerns, STIs, sexual coercion or a variety of health referral information: (203) 622-6496 or (203) 622-6460.

Liberation Programs Barry Halpin and Cerissa Orbegoso, both familiar presences on campus, were on hand to answer questions about their non-profit. Liberation Programs helps teens with substance abuse treatment and prevention. Halpin is a prevention specialist. Orbegoso, Liberation’s youth options counselor has an office conveniently located upstairs in the Greenwich YMCA. 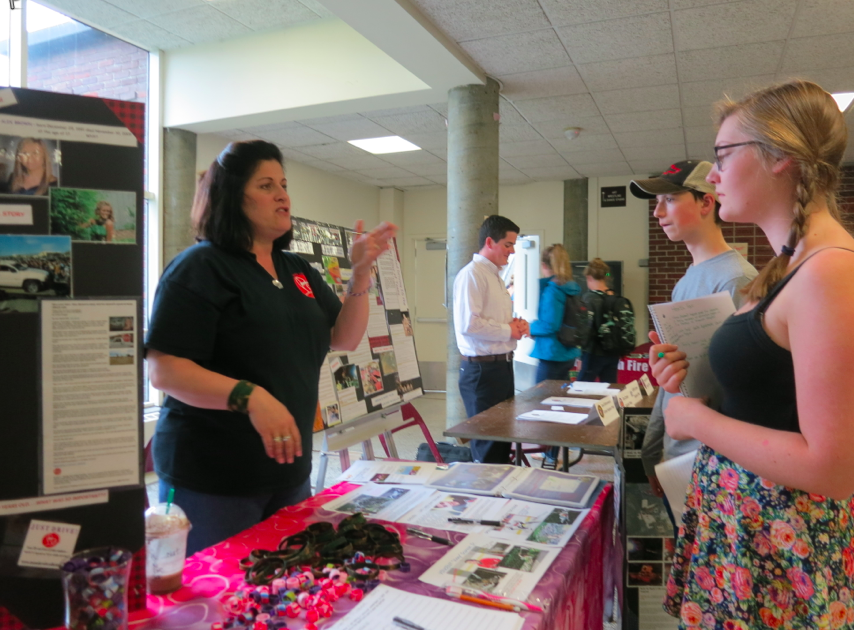 Ninth graders Leah Common and Ethan Coscia chat with Joann Heerman of “Moms Love for All Kids, Inc. Heerman, a mother of four, lost her nephew, a Marine, in a car crash that involve speeding. Credit: Leslie Yager

“I really just enjoy her enthusiasm,” said Common. “I will go to for her for anything at all. It’s a great class. I’m so glad it’s mandatory. Because otherwise kids might skip out and not learn anything important.” 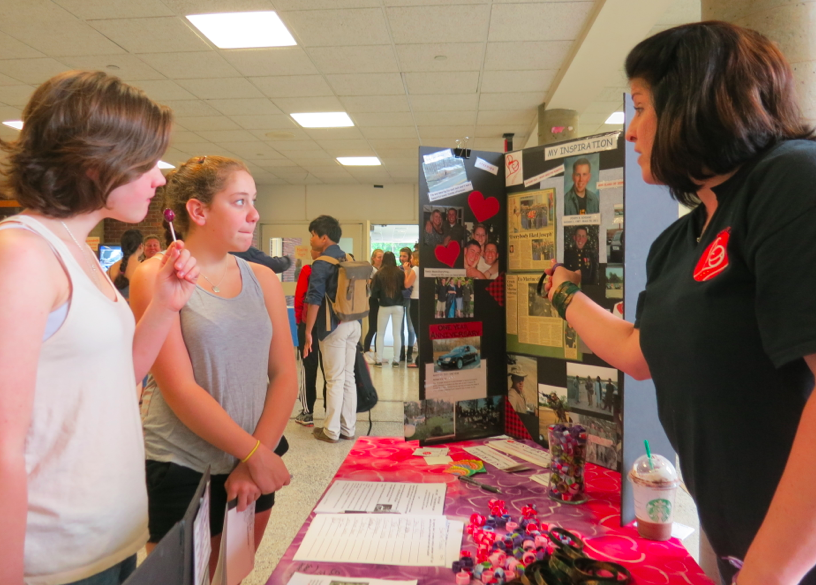 Ethan Coscia, 9th grader, said his favorite part Ms. Steiner’s 9th grade wellness class has been the self-esteem part, because self-esteem is something we’re all dealing with.”

“Because I’m a mom, they listen. That’s why I do what I do,” said Heerman. She said she is trying to raise awareness on speeding and texting. She said she was inspired to start Moms Love for All Kids, Inc. three years ago by her nephew Joseph, who was a Marine Graduated from GHS in 2005.

Hello ladies, she says to two ninth grade girls. “I’m Moms Love for all Kids. What I’m trying to do is raise awareness of speeding or texting. You’re going to take thumb bands and wrist bands. You’re going to learn something today. If someone drives you to and from…Even if it’s a parent, you’re going to say, ‘You don’t have the right to take my life.'” 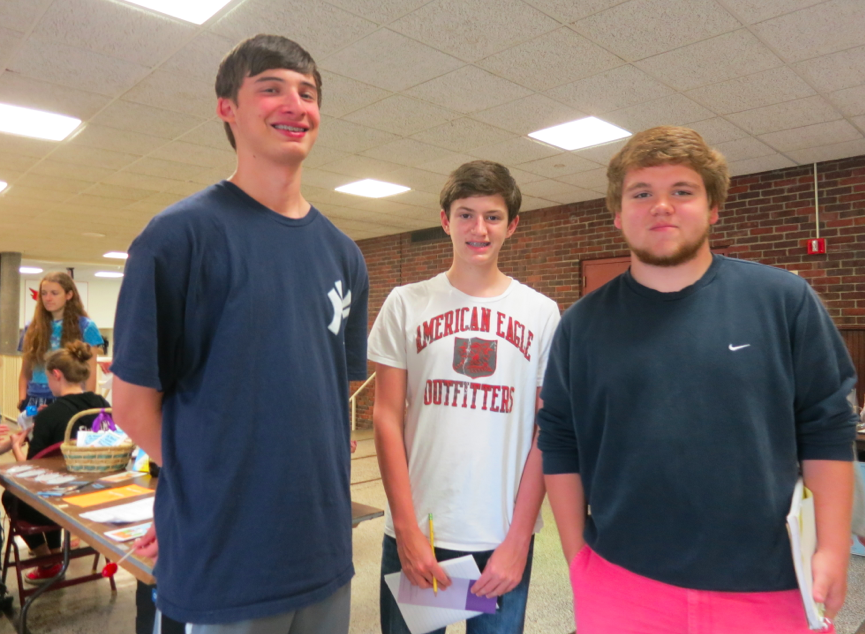 Aaron Gershon, Thomas Gordon and Mike Palamarcuik went from table to table at the Wellness fair at GHS on Thursday. Credit: Leslie Yager

Heerman handed out wrist and thumb bands to the students. “Take one for yourself and for someone you know who does this,” Heerman said, referring to drivers who text and drive.”

“A police man can now pull you over if they see you glance down at your phone. They don’t need another reason. You can say, ‘No I wasn’t,’ but they can check your phone record.” 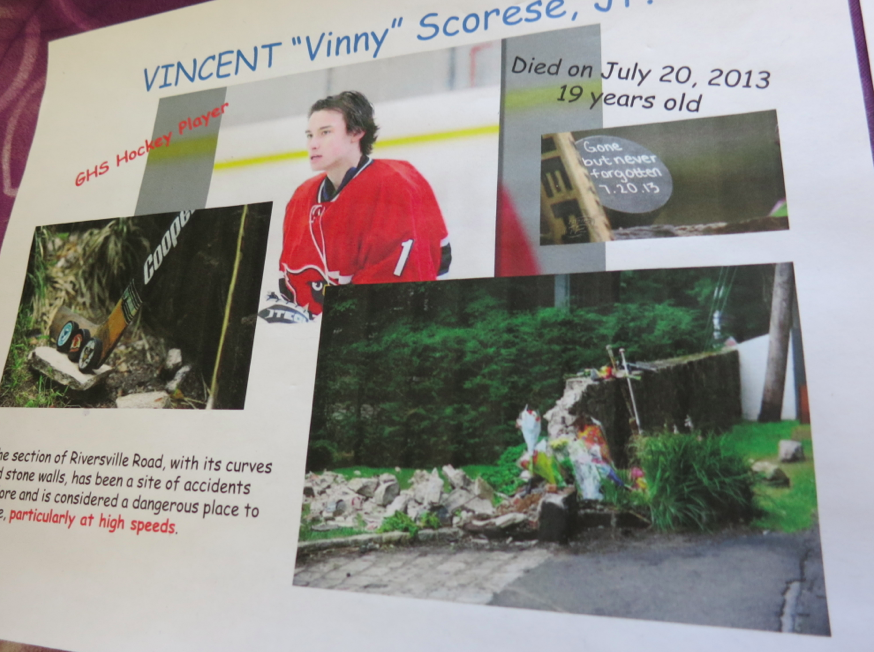 Heerman took advantage of every second she had with the 9th graders. “There was an accident. A girl took a selfie while driving and texted, ‘I’m in such a happy mood because the Happy song is playing.’ Those were her last words,” she said.

Heerman said a lot of phone companies are coming up with apps to break the texting and driving habit. “Sprint’s app just became free,” she said. “You don’t have to pay for it any more. When you have a habit — a good or bad habit – it’s very hard to break. I tell people to turn it off and put it in their trunk. Just for the next thee times. That’s what it takes to break a habit.”

Heerman repeated the story of her nephew’s death to each teen who stopped by her booth. She said her nephew Joseph Schiano, 23, was a Marine for four years, and he did two tours in Afghanistan. “He came home in December. Died in March,” she said.

Of another Greenwich boy, Vinnie Scorese, Jr., who died on July 20, 2013 at the age of 19, Heerman didn’t mince words while she had the attention of a group of 9th graders. “He was going way too fast, went around a corner, and hit a stone wall, got trapped inside his car and burned to death.”

Heerman made the most of every conversation with the students. “You are going to learn something today,” she said to Sara Commorato. “Boys, they think they’re invincible. It’s sad. It’s really sad. They look at me like I’m crazy sometimes, but they listen because I’m a mom.” 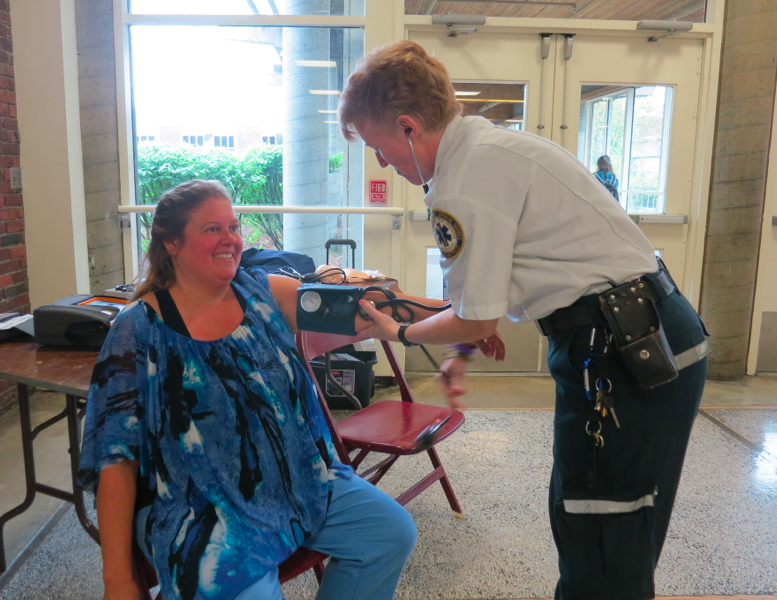 Elizabeth Linde, who has been with GEMS since 1988 was on hand to check blood pressure. Though Thursday was opening of Children of Eden, Patricia Cirigliano, GHS English teacher and theater director checked out well in terms of her blood pressure. 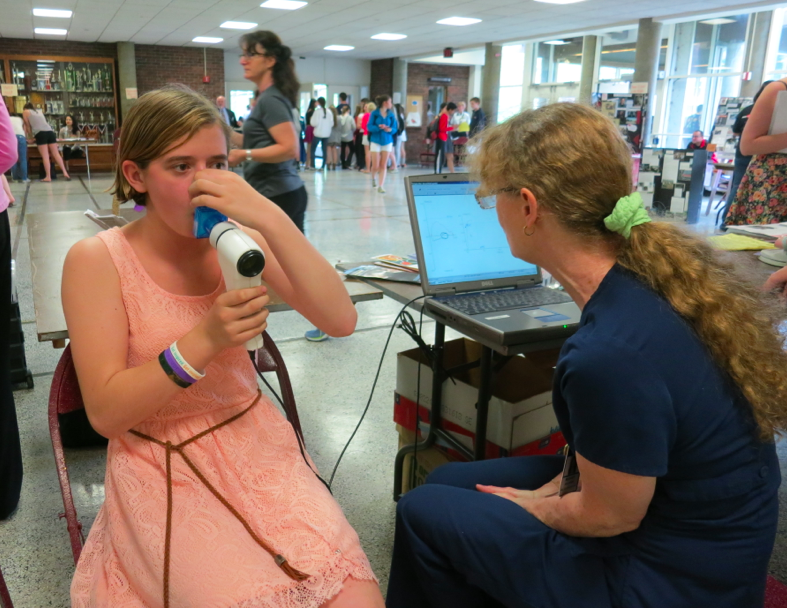 After a test administered by staff from Greenwich Hospital, Olivia Horton was told she had very healthy lungs. Credit: Leslie Yager 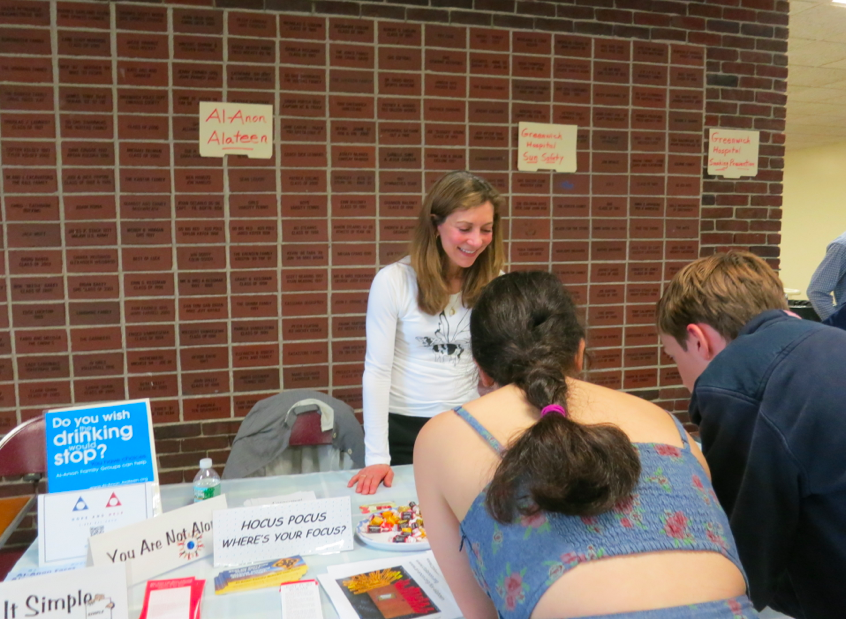 “Barbara R” from ALATEEN explained that her organization prizes anonymouty. “We provide a safe place and a support group for friends and family of alcoholics.” 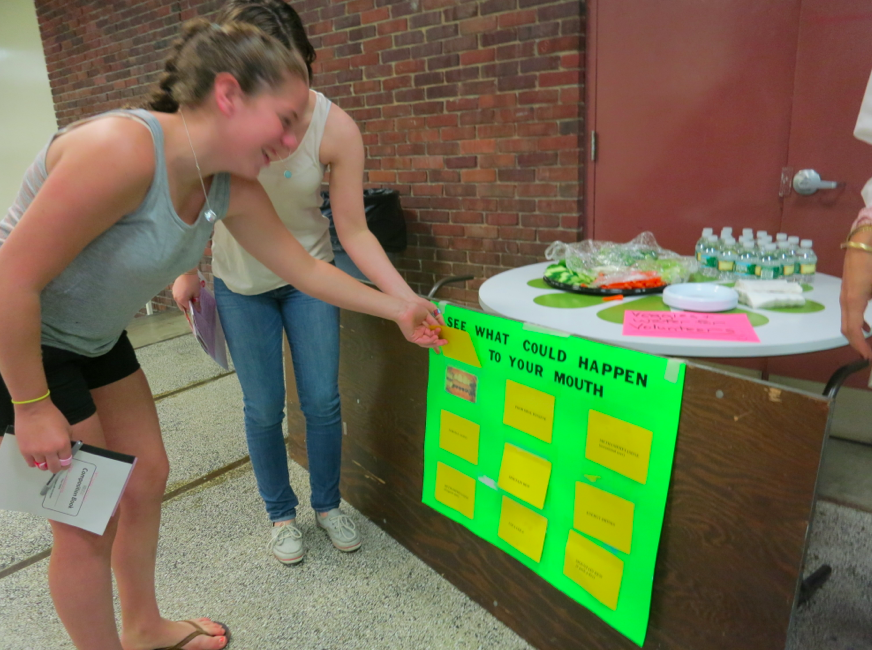 An effective display from the Town of Greenwich Dental Health Division. Sara Commorato was taken aback by the dramatic photos of teeth of soda drinkers and meth addicts. Credit: Leslie Yager 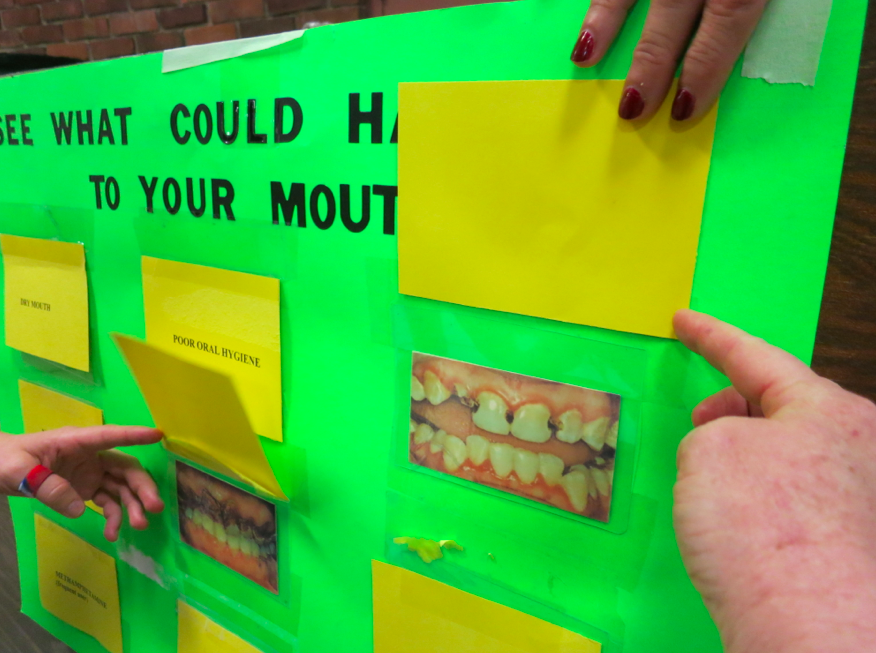