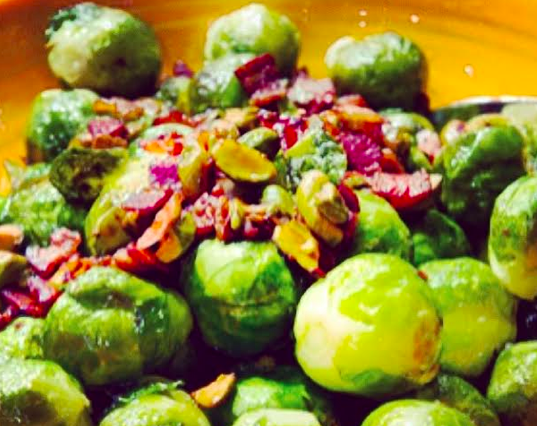 Brussels sprouts are not just for the Thanksgiving table. I love them all year round and I really like the bacon and roasted pistachio nut twist.

In a 4-quart saucepan, heat 2 quarts water to boiling over high heat. Add Brussels sprouts and heat to boiling. Cook for 5 to 7 minutes until tender-
crisp. Remove from heat and drain. In a 12-inch skillet, cook bacon over a medium heat until browned. With tongs, transfer bacon to paper towels to drain. Crumble bacon into bits. Throw away all but 1 tablespoon bacon drippings from skillet. Add olive oil and heat over a medium-high heat. Add Brussels sprouts, garlic, kosher salt, and pepper. Cook, stirring frequently, for about 5 minutes until Brussels sprouts are lightly browned. Remove and transfer to serving bowl. Sprinkle with roasted pistachios and bacon. Serves 10 as side dishes.

Note: To toast pistachios preheat oven to 350 degrees. Spread shelled nuts in a single layer on a baking sheet. Bake, stirring occasionally, for 5 to 10 minutes until lightly browned and fragrant. Remove and let the nuts cool completely before chopping.