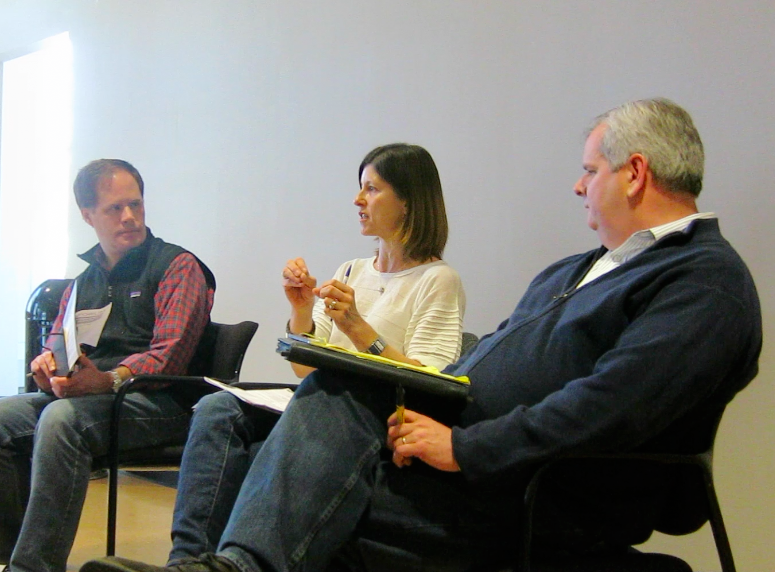 At the heels of week in which a spurned prom invitation resulted in tragedy, a Father’s Forum talk on cultivating resilience in children was timely.

GHS Wellness teacher Kathy Steiner said she had recently been talking about stress, stressors and stress management with her 9th graders.

Fear of Failure – You Must be a Super Star

Steiner said, “I don’t care how old or young you are, or how much money you make, we all have stress.” But for her what matters is a person’s ability to turn their stress into opportunity.

Steiner said it is sad when a young person turns down opportunities as a result of a fear of failure. She said she tells her students that it’s better to try and fail than pass up opportunities.

“It’s okay to make a mistake,” she said. “Our kids have so much pressure on them to be perfect, but everyone makes mistakes. It’s learning through mistakes that makes you a better, stronger and more productive.”

Joe O’Callaghan, who is the head of social workers for Stamford Public schools and has a private practice agreed and said, “It’s important to model resilience to your kids. For them to see how we deal with our own failures. Do they see a role model of someone who can tolerate frustration? Who can tolerate their own weaknesses? And survive a failure of some sort? Whether you talk about it ever or not, but to it’s a skill kids learn from their parents.”

Coach is a Jerk. The girl I like doesn’t like me back. I didn’t make the team. I’m in foster care. My home was destroyed by a tornado.

O’Callaghan said that in diverse schools such as Stamford Public schools, which have an increasingly Latino and immigrant population, many have overcome major obstacles just to get to Stamford and become students there.

“They may be illegal immigrants, have crossed the boarder to come here, left behind family, or live with 12 people in a two room apartment,” he said, adding that the resilience of some of these students can serve as models for those who seemingly have everything they need.

“They’re not always going to run to a therapist and they don’t need to,” said O’Callaghan, adding that students often model resiliency for each other.

“People who experience some kind of hardship can help each other,” he said, describing a student on his third foster home who takes two buses and two trains every day to commute from a Bridgeport foster home to finish up at Westhill High School, and how he was able to model resilience for another student.

O’Callaghan added that it can be very helpful for one student dealing with a challenge or setback to help another student.

O’Callaghan said it’s important to teach children how to deal with frustrations and  disappointments from an early age. He gave the simple example of a parent declining a child’s request to go through the McDonald’s drive-through and suggested that parents can help children build their coping skills and manage their frustrations early on. “That way,” he said, “when they get older and larger difficulties come their way — maybe they don’t get into the college they wanted to — they will be better able to cope.”

Steiner said she had a student recently advise a peer to “Just bottle up your feelings.” She said she taught the students instead to use “I Messages.”  Rather than repressing an emotion or avoiding conflict, she tells students to own their emotion and express it.

“You need your feelings validated. If you are feeling angry you can control how you react and use I-messages. ‘I feel angry because you are talking about me behind my back, because I thought we were friends.'”

Steiner said that rather than the old school, “Just suck it up,” mentality, she likes the Serenity Prayer: “Give me the courage to change the things that I can, accept the things that I cannot change and the wisdom to know the difference,” and that she teaches her students to apply that approach to every day situations. For example, she said, when a student doesn’t make the team, “You can go to the coach and ask him what you need to do to improve to maybe make the team next year.”

Both Steiner and O’Callaghan agreed that parents who attempt to protect their children from any kind of misfortune, sabotage their future ability to cope. “We live in a culture that tells us our kid has to be the number one kid in whatever, or they won’t be able to survive. The idea is intense in our culture,” he said.

“You’re Yelling at Me” vs Trying to Fix it

O’Callaghan characterized fathers as often responding to a child’s problems by trying to fix them. He said that mothers are better listeners and that they are typically appreciative of the ambiguities of what their children are saying. He said that mothers are often perceived as nagging or accused of yelling by their children, when in fact they are just anxious and repeat themselves.

Steiner said it is important for both fathers and mothers to be active listeners, to listen without interrupting.

The topic of “Yik-Yak” came up. “Yik-Yak is a new app where you can tweet anonymously within 150 yards of someone,” O’Callaghan said, and Steiner added that a similar situation happened at GHS.

On the topic of teens and technology, Steiner said, “We can’t shield them, so we have to give them the tools to use it productively and positively. Because with Facebook, MySpace Instagram and Twitter, reputations can be ruined. We have to help them use the technology in a healthy safe way.”

Handouts from the Father’s Forum on Raising Resilient Children can be found online: