The Fathers’ Forum hosted a talk entitled Coping with Stress on Saturday morning. The talk, which was the first for the Fathers’ Forum 2014-2015 lineup, was held at the YMCA, and benefited from a turnout of about 50, mostly fathers. The large turnout is significant, given that the talks are scheduled for Saturdays at 8:00am. Since it was established ten years ago, the organization has garnered a reputation for great speakers and timely topics.

GHS Headmaster Dr. Chris Winters was joined by Dr. Dan Brenner, who is both a Clinical Psychologist and Superintendent of Roslyn Public Schools in New York.

The duo helped parents understand children’s stress through the eyes of school systems. Dr. Winters described himself as mostly an observer of stress from his perch at the helm of a school of 2,600+ students. Winters said that each house at GHS has a social worker and part time psychologist on hand.

Winters said that Greenwich puts great pressure on its young people. “There is pressure to measure up. Everything is measured,” Winters said, adding that, for example, for many students, taking the most challenging course load is a measure of success. But, he said, for some it’s not enough to take the top classes. “If they feel they need to be at the top of those classes they may not feel they measure up,” he said.

Dr. Brenner said that in his school district in Roslyn, kids start thinking about college in 6th grade. He said that although there is nothing wrong with aspiring for greatness, but, that students write scripts for themselves, such that if they don’t get into a dream college they are crushed. “Every time they deviate from that script, oh my god.” 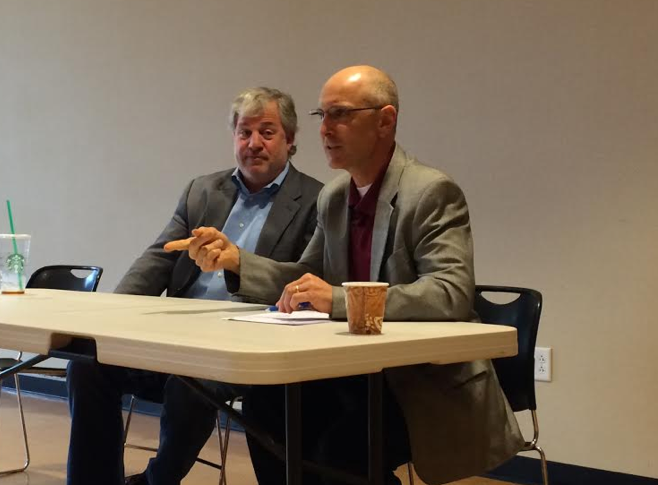 “We’re in high season right at this point,” Brenner said of the college application process. “We are turning over a decision to a kid, typically a 17-year-old who doesn’t have a clue. A kid who is making a decision based on whether the dorms are built of bricks or stones, or whether the kids look like them,” he said.

And while Brenner sees the decision of picking a college as a huge stress for a 17-year-old, Winters described the stress from a different angle.

“And how can schools be structured to support that? As opposed to a traditional school mentality where we keep sorting, ranking and telling some kids your smarter than others, and others that you’re not measuring up…Kids have to know you’re going to experience failure.” Dr. Winters, GHS Headmaster

Winters pointed out that everyone — adults and children alike — experiences various levels of failure on a regular basis, but that he observes parents intervening too often.

Brenner said it used to be that schools were given the benefit of the doubt, but now that has flipped and too often parents automatically blame schools.

“Kids have to know they’re going to experience breakups, relationships, people are going to be mean to you,” Winters said. “But, it’s all going to come crashing down if you don’t develop resilience and grit.”

The GHS headmaster said that teens’ stress and feelings aren’t necessarily articulated, but rather manifest in behaviors and that school social workers and psychologists help students who are “really hurting,” whether the hurt stems from financial stress at home or parents who are not of “one voice.

Winters on GHS Students: The Same Stressors Yield Different Reactions
Winters said the vast majority of students at GHS do everything they are asked to do. “They become worker bees. They stay up too late. They do every assignment perfectly. They strive for the best grades. They buy into the belief that high school is about getting into college, and college is about getting a good career. There’s nothing wrong with that,” he said, adding, “We have other students who, faced with the same stresses yield different reactions, and maybe “pull away.” “Maybe they don’t feel they can’t measure up and so let me demonstrate who I am in a different way.”

Winters said other manifestations of student feelings include bullying behaviors and drug or alcohol abuse. “All of these things are manifestations of what students are feeling on the inside,” he said. “We look for changes in behavior,” Winters added. “Eating habits, changes in grades and overall comportment.”

Winters said that GHS has reduced the number of suspensions they mete out as punishment. “We talk to them and try to get to the subtext of what caused that behavior,” he said.

Asked what parents could do to help their children cope with stress, Brenner reminded parents that they model behavior. “If you’re in a restaurant and the food arrives to you cold, what do you do?” he asked. “Your kids are watching everything you do. How do you treat the person who cleans your house or mows your lawn? How do you handle failures?” he asked. “They don’t miss anything.”

Benefits of a Big School Like GHS
Winters said there are both pros and cons to a school the size of GHS with an enrollment of 2,600+ enrollment at GHS as the students have more chances to find a way to fit in. “The is a little something special for everyone. There is a niche for everyone,” he said of GHS.

Describing the massive student center as an amazing melting pot, Winters said, “Aside from skin color and language background, you see clumps of kids coming together based on common interests. They find their group,” he said. “That’s how they’ll describe it. They’ll say, ‘I found my group.'”

November 15, 2014 – “Fathers and Sons – A Fathers Toolkit” A focus on the ongoing development and enhancement of the unique relationship between fathers and sons.

December 6, 2014
“Who are your Friends” – A focus on the peer relationships our children develop.  What are the warning signs of a potentially destructive relationship?

January 24, 2015
“Sports Parenting” – A Sports psychologist will be joined by a college division 1 student-athlete to offer first hand perspective regarding the demands of athletics at the college level.

February 28, 2015
“What Did You Do Last Summer” – Information regarding numerous summertime work opportunities for kids at volunteer and charitable organizations. The discussion will include strategies to help children to uncover their interests.