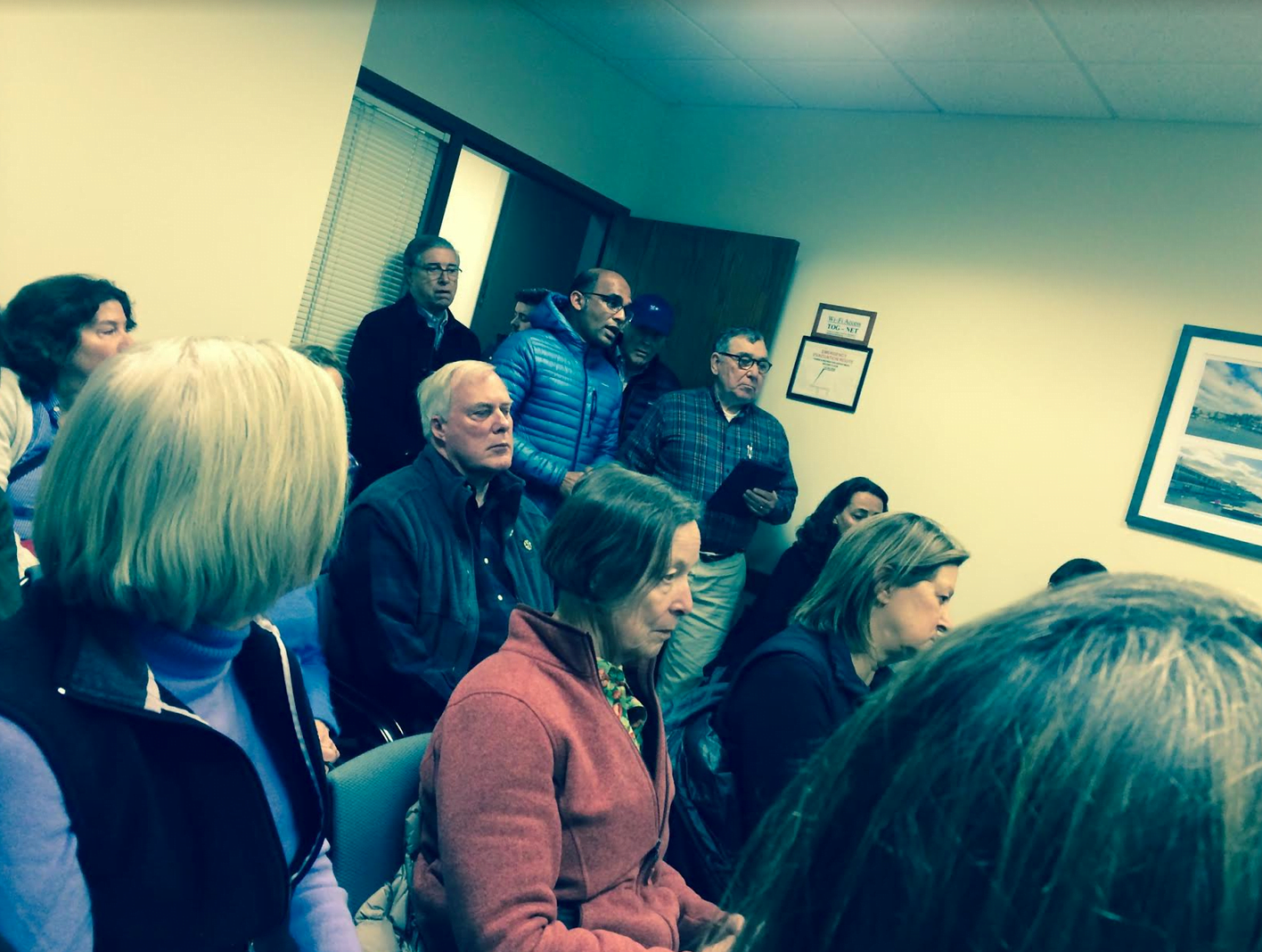 On Tuesday at noon the Parks & Rec conference room was packed and standing room only for a hearing on the fate of 20 trees in Binney Park, mostly Crab Apples, but also one Sugar Maple that the town Tree Warden Bruce Spaman posted in mid January for removal.

A complaint triggered the meeting, which was postponed from its original date, which coincided with public school vacation. Mr. Spaman rescheduled it so that more people would be in town to attend.

Seated for Parks & Rec were Bruce Spaman, the Tree Warden who has retired but is working part time to finish out projects while the Town searches for his replacement, Deputy Tree Warden Steve Gospodinoff, Parks Opertions Manager Darren Wigglesworth and Administrative Assistant Margaret Cawsey.

The room was small but filled to capacity with a standing room only crowd of about 40. Most of those in attendance said they were neighbors of Binney Park objecting to the removal of the trees.

Many said they were caught unawares about the Binney Park Master Plan, much less the removal of so many trees, and asked if there had been public meetings.

The trees to be removed are located in the park, south of Wesskum Wood Road, between Arch Street and Binney Park Drive. 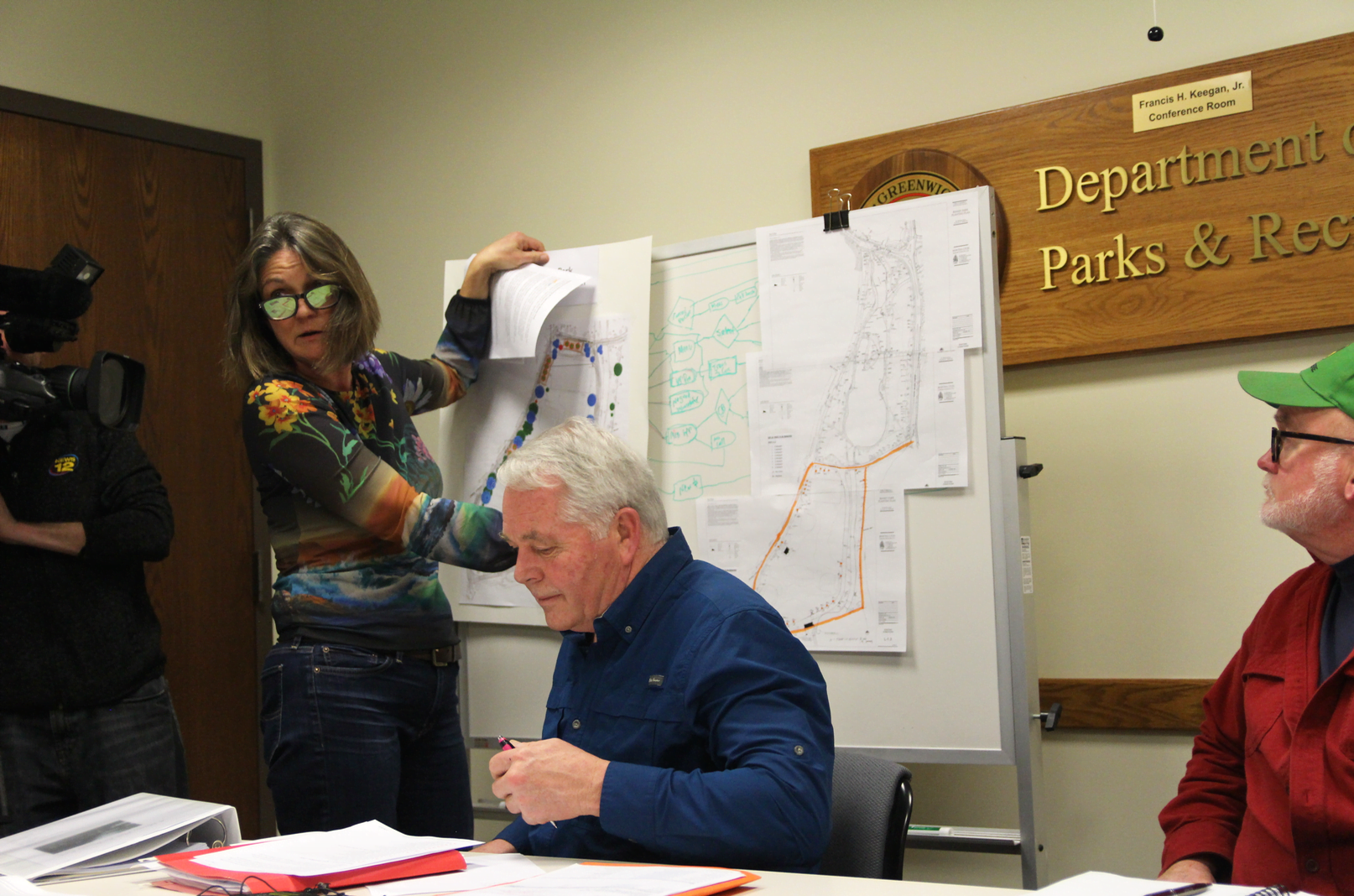 Char Barnes presented an alternate plan for the removal of 20 trees form Binney Park, which is available on her website. Feb 26, 2019 Photo: Leslie Yager

Mr. Spaman said that the Binney Park Master Plan dates back to 2015 and had many public meetings leading up to the posting of the trees. He said the master plan has already been accepted by the Parks & Rec board and the Director of Parks & Rec Joe Siciliano.

That said, residents who said they were blindsided. Some complained that the master plan it a multi page PDF that is difficult to find online and difficult to view.

“It’s not carved in stone. There is some wiggle room. We’re going to replant, we’re not clear cutting the park,” Spaman continued adding that he welcomed input.

Nancy Chapin was present to represent the Binney Park Advisory Committee. She was among several neighbors of the park who asked if it was possible to plant the new trees while the existing trees are still standing.

Spaman said the trees were not well suited for the climate. The soil in that area is soggy, and often wet. The idea is to get some more suitable trees for the future of Binney Park.

Crab Apple trees are prone to a fungus like disease which is exacerbated by the wetness of the area. They are under particular stress and lose their leaves early. By mid August they are defoliated. Spaman said there is a list of trees being researched that can tolerate wet soil. The trees that are cut down will be replaced at a ratio greater than one for one.

There is a list of 19 different types of replacement trees being researched. The trees won’t be selected until it’s time to plant because it’s not possible to anticipate what will be available. 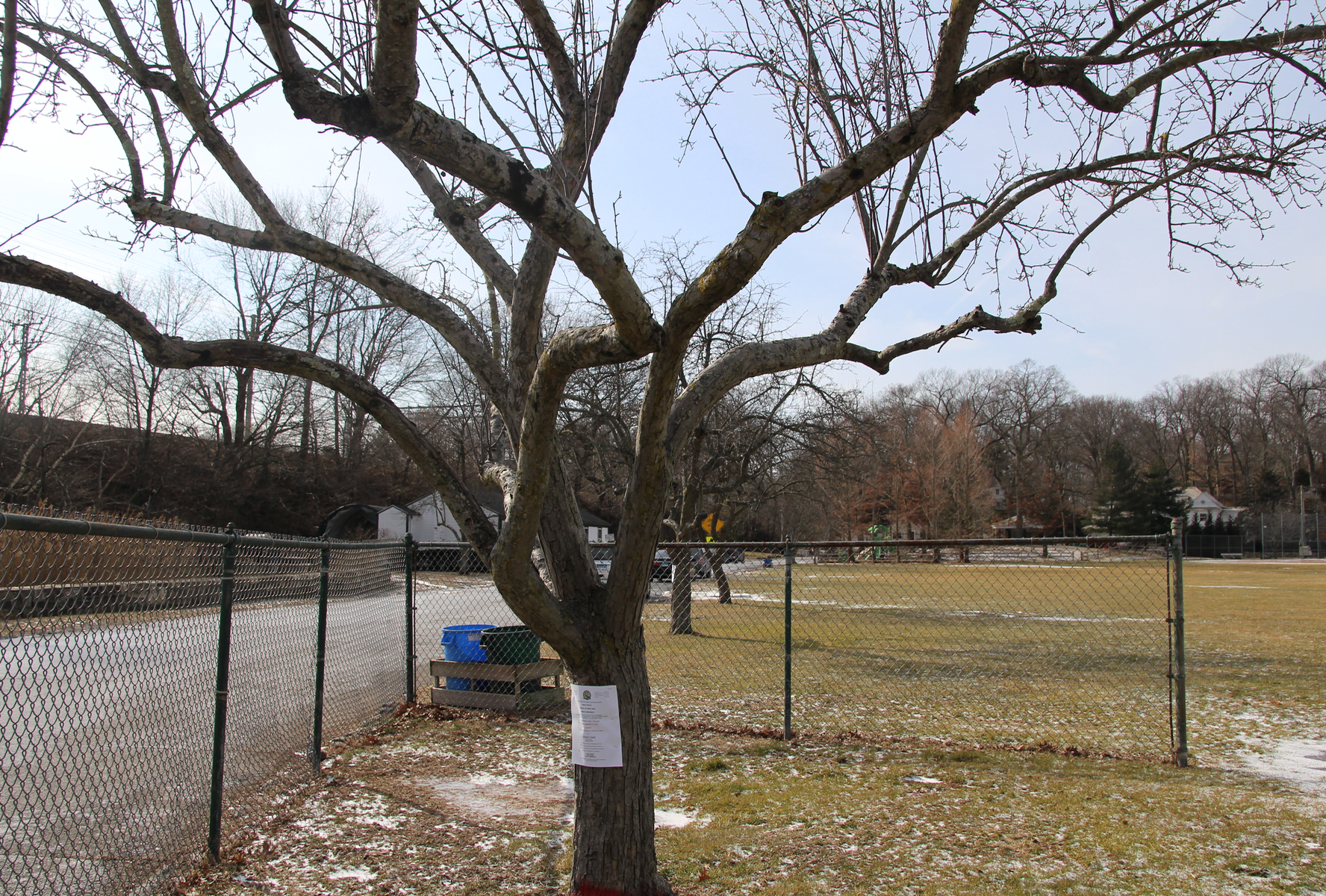 For example, Greenwich Tree Conservancy director JoAnn Messina said she hoped to plant a Copper Beech but had to wait three years for them to be available.

In any event, Spaman said the replacement trees will feature a variety of deciduous, ornamental and evergreen trees in order to avoid “monoculture.”

Nancy Ramer a longtime neighbor of Binney Park said although the master plan was fully vetted, she’d ask that that the trees not be cut down until the new ones are planted, so there is no period of time with no trees.

Adjacent neighbor Robert Sibley asked why, of all the improvements needed in Binney Park, was tree removal a first priority?

“Why now?” he asked. “Most of the trees are still alive if not healthy.” He said there were other things in the park that need work. “The fields are horrendous and full of crabgrass. There are mini ponds that result from bad drainage. Walkways were supposed to have been improved two or three years ago.” 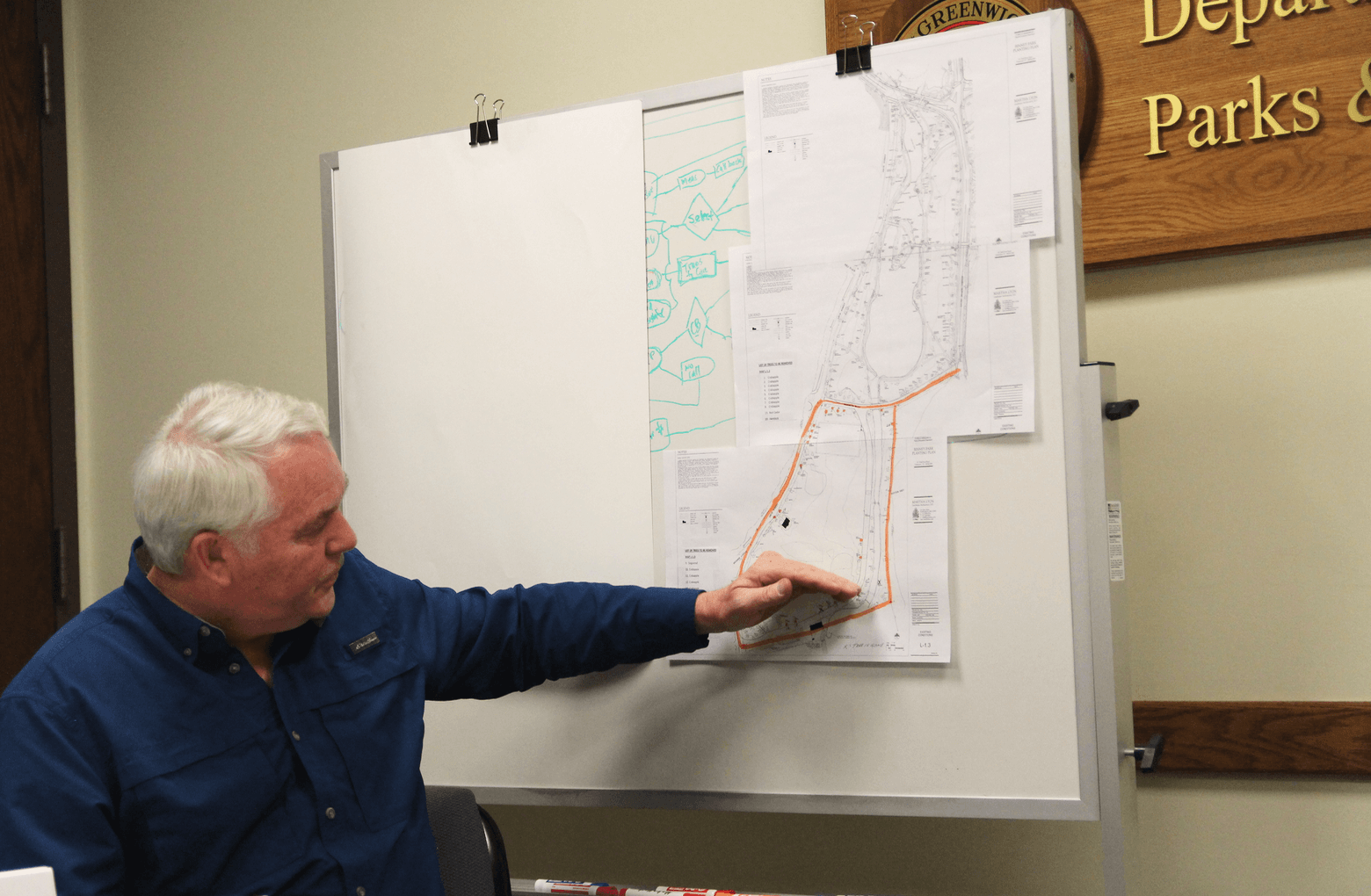 Spaman said he was only holding the hearing about the trees, not other projects in the park. “If we stray from that we’ll be here til midnight.”

“This was called low hanging fruit. There were tree experts who verified their health, that it was a monoculture, and not suitable for the climate going forward,” Spaman said. “This is where we chose to start.”

“You’re kind of deaf to the people who use the park who are there all the time and what is really not working,” Sibley said.

Bob Meaney said, “The Crab Apples are in front of my house they’re quite beautiful.”

In fact, neighbor after neighbor repeated that sentiment, that the trees are beautiful when they flower and are not dead.

“Crab apples are tolerant of damp, but not inundated soils,” Spaman said. “The old varieties are susceptible to fungus diseases. This is an improvement project. That’s what we’re trying to achieve.”

Charlene Barnes, a longtime resident of Old Greenwich who is a CT Master Gardener and member of the Garden Club of Old Greenwich said there are four trees coming down that are not Crab Apple trees.

“I am not a fan of crab apples,” Barnes said. “I wasn’t objecting until I heard how many were coming down. It is a huge percentage of trees and a lot of them look pretty good to me.”

Ms. Barnes presented an alternative plan, which she said is available on her website  CharBarnes.com

She acknowledged that Crab Apples do have issues. “Just go and look in the front of Town Hall and you’ll see the issue. They don’t perform consistently. … If they were so awful why did the town plant 16 of them at the Old Greenwich train station last fall?”

She said the biggest crab apples in Binney Park are 25 ft tall and 20 ft wide.

“They’re not at death’s door. Don’t rip them all out just become some of them are underperforming. The idea that they’ll die doesn’t mean cut them down. That makes me glad you’re not my doctor,” she said. “They don’t have to cut down a single tree to replace these. Nothing has to come down.”

Barnes said that removing trees including a Sugar Maple over by the tennis courts would leave a view of a chain link fence. As for replacing those trees with a perennial garden, she said, “The native garden is a huge area. Please don’t do this. This is a huge commitment and it’s unfair to expect the town to take care of a quarter acre of perennials and take out the trees.”

Lastly, Barnes said she couldn’t find the PDF of the master plan on the town website but received a copy elsewhere. She said it is over 9 pages long and difficult to navigate on a computer screen.

Bob Brady said the project should not go forward. “The Conservation Commission is completing first of a three-year resilience study. Year 2 starts on July 1. It will assess the impacts to the town ponds from tidal migration and transition to a higher salinity environment.”

Brady said the recommendations will not be available until fiscal year 2020 or later. “It’s a three year study and we’re just wrapping up the first year. It would be prudent to wait til the results of the study.”

“This plan was completed in 2015,” Spaman replied. “There was pressure to say when are you going to get moving on it. So another delay… I don’t think I’ll be here to see it.”

Dana Whamond, a landscape designer said she did not approve of the broad removal of the trees. “While there may be flood plains, if there is a water issue there should be grading done first.”

Whamond quoted a Latin phrase which translates to “First, do do no harm.”

Lisa Beebe, the Director of Horticulture at the Greenwich Botanical Center spoke as arbo curator for Greenwich Tree Conservancy, and agreed with Mr. Spaman for the most part.

“For the past eight moths I have been out in Binney Park hugging the trees. I go out and measure them and evaluate them. Bruce (Spaman) showed me the list of trees coming down. I said, okay poor condition. Not doing well. This one lost its leave in mid august. …I agreed with all but the Sugar Maple on your list. That one I object to. I’m not sure why you did it.”

“I know there is opposition,” she said. “Let’s keep the conversation going and let’s not block progress because these trees are dying and will die.”

Renee Seblatnigg of Cos cob said Greenwich residents are recently “shellshocked” at the incidents of clear cutting along I95. “It’s very jarring. This doesn’t have to be done immediately, entirely. To the extent it could be done on a rotation basis, timed out and give new ones a chance to take root. That’s the way forests grow.”

Spaman said he was operating on the assumption he would remove and replace trees at the same time, rather than leave empty spaces.

“I didn’t want to drag it out with having a hearing for every single tree. Let’s facilitate phase one. And see what we get. This is what we got. I am listening,” he said.

Dick Fiss said, “You’re hearing sentiment about going slowly and not a dramatic cutting. Doing it in stages would be a lot more friendly.”

“What we’re all feeling is – all of us who live in Old Greenwich have felt assaulted by the railroad stuff, Sound Beach Ave being torn up. We’re all pretty skittish about any more big new things going on. If you want to plant new trees, do it but don’t take the old ones down util the new ones are established.” – Sharon Resnick

The room applauded Ms. Resnick. Ros Brady of the Old Greenwich Garden Club also asked Mr. Spaman not to remove the trees until it’s necessary. “The beauty of them and the shade they provide is really important,” she said.

Ms. Messina of GTC praised Mr./Spaman, Mr. Gospodinoff and Mr. Wigglesworth. “These these guys have been preserving our urban forest,” she said. “He (Spaman) wants to make sure this jewel would be preserved and enhanced as it should.”

Messina said park flooding worsened there and is more salt than before. “Binney has changed more drastically more than any of our other parks in town and needs more of a drastic change than our other parks. I agree this is our asset. Trees are our life.”

“The right trees can help with the flooding issue, rather than engineers and drainage,” she said.

Bob Brady asked if the plan had been submitted as a Municipal Improvement. Mr. Spaman said trees fall under the jurisdiction of the Tree warden.

The next meeting of the Binney Park Advisory Committee is on March 5.

Mr. Spaman will, per statute, make his ruling on the fate of the trees within three business days. As the meeting was Wednesday afternoon, the decision might follow the weekend.