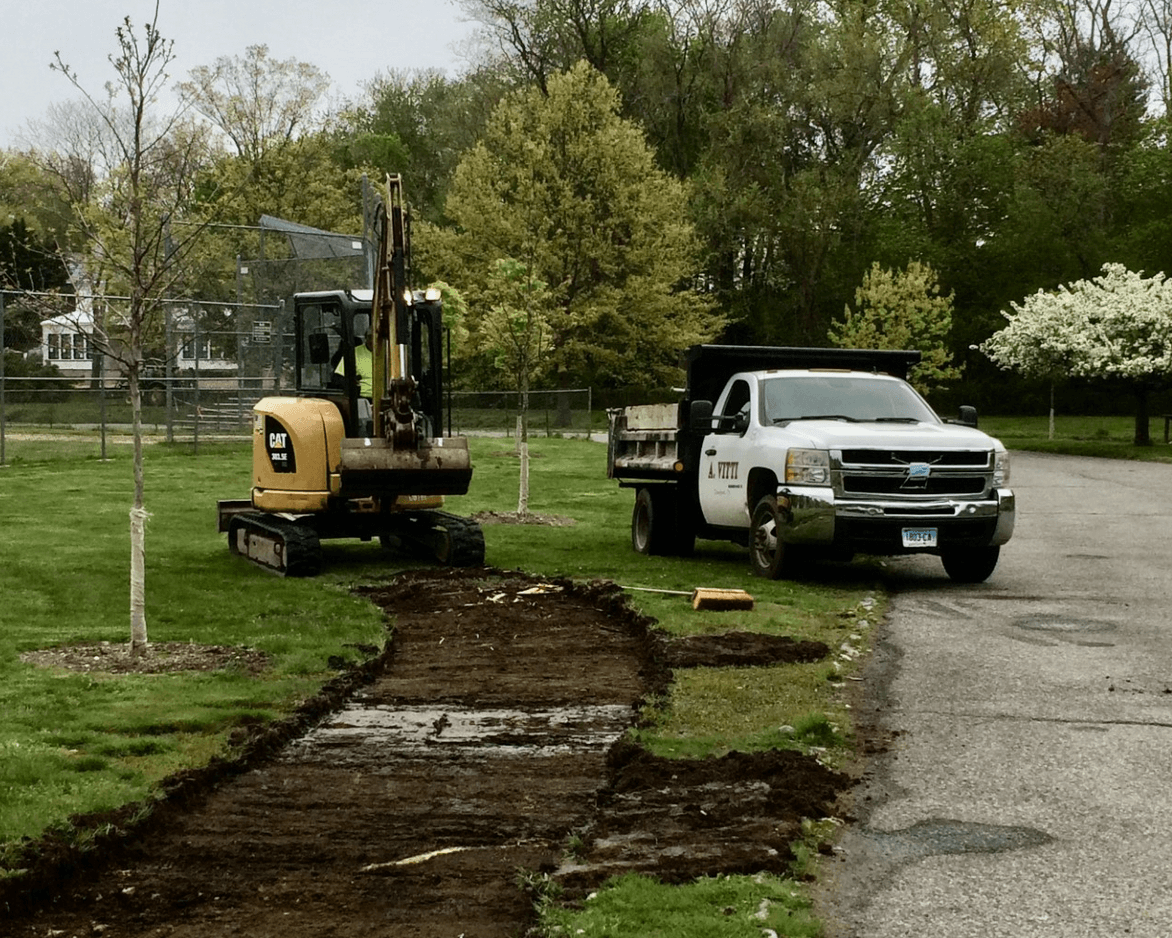 A new pedestrian pathway is attracting attention to the South end of Binney Park.

It is intended for joggers, walkers and those with strollers who currently enjoy the pond loop in Binny Park. The new pathway allows individuals to now almost double their walking experience by venturing more safely into the south end of Binney.

The nearly completed trail is a joint effort of the Binney Park Advisory Committee and the Department of Parks & Recreation.  The idea came from resident comments in 2015 requesting a better connection between the North and South ends of Binney. The path was subsequently incorporated into the  Binney Park Master Plan.  The off the roadway path a new 1/4 mile long and designed to have a park-like feeling.

While not currently a full loop yet, this first section will be added on to later in the year.  Presently one can start walking the trail where Arch Street and Wesskum Wood Rd intersect. The trail meanders southward as far as the playground and then moves along the bottom of the park over to the stream and spillway on the East side of Binney.

Where the stone-dust trail ends, walkers have the option of either returning the way they came or continuing up along the park road back to Wesskum Wood Road. It is also an option to cross the stream and walk up the grassy area which is where the next section of pathway will eventually be added.

A principal asset the new pathway provides is pedestrian safety. Until now, anyone walking in the South end of Binney, on the West side along Arch Street, either must walk on the grass or on Arch Street itself. The new pedestrian walkway meanders away from the road and skirts the playing fields. Among other features it provides easy access to the restrooms and fenced playground.

Dr. Greg Kramer, Superintendent of Parks and Trees, believes the stone-dust, which is permeable, will be an asset.

“It offers an easy walking surface and has proven to be long lasting surface at places like Greenwich Point where a pathway honoring former resident Kit Warren has been in place for some ten plus years,” he said.

The Binney Park Advisory Committee (BPAC), a group of volunteer residents, has been completing improvements in Binney for the last year. They work in conjunction with the Parks Department staff headed Dr. Kramer and Field Supervisor Darrin Wigglesworth. Jonathan Fasone, Binney Park Supervisor, and his group of employees, based in the South end of Binney, has been instrumental in accomplishing many of the projects.

Among the improvements, noted by BPAC co-Chairs, Nancy Chapin and Peter Uhry, have been the restoration of the skating hut on the island in the pond. Last fall, the building was stabilized, a new terrace with benches was constructed and extensive landscaping was accomplished.

Additionally, new plantings have been installed in front of the restrooms near the playing fields in the South end. A new terrace is being considered here when additional Park funds or sufficient donations from residents allow it to be built.

Revised plantings, where Arch Street and Sound Beach Avenue meet, were initiated recently and additional plantings along both sides of the pond in the North end are to be accomplished later in the year. Started last summer, several flower beds and added shrubs were installed following the pond’s dredging.

Nancy Chapin, who in addition to her work on BPAC also serves on the Board of Parks & Recreation commented, “We have an extraordinary committee of a dozen doers. They include local landscape architects Bill Rutherford and Frank O’Gorman, Joanne Messina from the Greenwich Tree Conservancy and Mary Hull from Greenwich Green & Clean.

Peter Uhry has been a longtime supporter of improving Binney and deserves credit for getting this group together.  Lynn Davenport, Linnea Stenberg and Lisa Beebe all bring their gardening expertise to the committee. Dr. Greg Kramer and Darrin Wigglesworth have been so supportive and have spurred along our projects allowing us to get a lot done in a short time.”

Nancy noted that, this summer, the BPAC will be seeking volunteers to help establish a Friends of Binney Park and do volunteer work. Resident participation will help  achieve future improvements, not only in the Park itself but in the Hillside Annex and Binney Kitchel Nature Preserve which are lesser known sections of the Binney complex.