The Board of Selectmen held a workshop in the First Selectman’s office on Monday and residents had seats at the table. 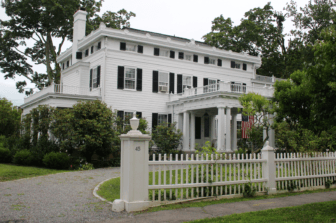 Among topics discussed was safety in the mid-block crosswalk on Milbank Ave where an elderly woman struck by a car on Jan 8 died of her injuries on Jan 18, and advertising on Town property.

An interesting discussion concerned the number of properties being purchased by tax exempt institutions.

Camillo said hospitals and schools in particular are buying up properties and taking them off the tax rolls, often to use for employee housing. 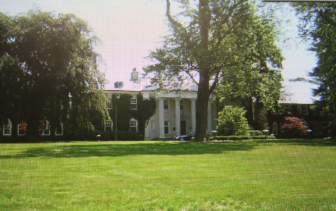 1275 King Street was purchased from Paul Turdor Jones by Brunswick School resulting in a loss to the town of $345,121.24 in property taxes. Photo courtesy Assessor’s office at Greenwich Town Hall

Near Greenwich Academy’s and Brunswick School’s downtown campuses, dozens of properties are owned by those schools. 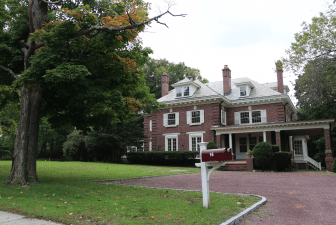 There is another point of view to consider, which is that many private school families do live in town and do pay property taxes.

The cost to educate a student in Greenwich Public Schools, according to the CT School Finance Organization, is approximately $20,000.

Greenwich Academy parent Miriam Kreuzer, who is now a member of the BET, said during the June 2018 hearing on expanded FAR for schools, that many private school parents pay some of the highest property taxes in Town.

She described complaints as shortsighted and unnecessarily alarmist.

“They are saving the town multiple tens of millions of dollars by educating their children privately,” she said at the hearing.

In any event, the proposal for a 30% increase in FAR for educational institutions did not happen. 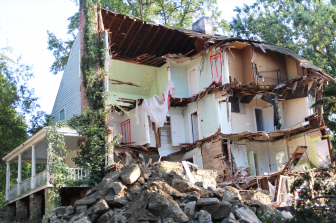 A consequence of their having maxed our their FAR is that private schools have nowhere to turn except to purchase contiguous properties to expand their FAR.

Last summer Greenwich Academy tore down 2 Patterson, which they had owned for many years. The demolition had the effect of increasing their FAR.

Camillo said, “I’m not so much worried about the tax exempt status of a hospital or school, but they’re getting free services. We send the trucks around to pick up the leaves. It’s something I feel very strongly about,” he said, adding that the remedy might be on the state or local level.

“To do anything different than what we’re doing would require going to the state,” Selectperson Jill Oberlander said. “There are state laws that govern this.”

“Maybe we can get an ordinance that doesn’t conflict with state law,” Camillo said. “It’s going to become more and more of a problem here. We’re seeing it now.”

The First Selectman said that after the special election, he hoped the Greenwich delegation would address the issue in Hartford. He said he would be willing to testify.

“It’s not just a Bridgeport/Hartford/New Haven problem,” Camillo said, noting that roughly 50% of the housing in those cities is tax exempt.

According to the Hartford Business Journal, 59 percent of the assessed real estate in that city is exempt from taxation because it is owned by the City of Hartford, the State of Connecticut, nonprofits, churches or other tax-exempt organizations.  The list includes schools, parks, firehouses, the public-safety and public-works complexes, and city hall, as well as residential and commercial properties seized for back taxes.

“As time goes on more and more towns will get involved,” Camillo said.

Selectwoman Lauren Rabin said at a recent training for newly elected municipal officials she learned other municipalities are exploring creative ways to work with tax exempt organizations so that they contribute to the town financially.

“I’m not picking on the private schools at all, but it’s a fairness issue. This money keeps going away. We have to make it up somewhere.” – First Selectman Fred Camillo

Oberlander pointed out that not all properties owned by the hospital and private schools are tax exempt and that there extensive information should be gathered.

“The hospitals have a broader exemption than the private schools,” she said. “But I’d suggest these  institutions attract people to our community. There’s a balance.”

“Certainly these institutions do add value, but there is a limit,” Camillo said, citing the central Greenwich’s Fourth Ward as a neighborhood where the private schools have purchased many properties.

Doreen Pearson, owner of Stanton House Inn on Maple Ave talked about a domino effect. “Nobody wants to buy the house next to those schools now because it is inevitable that they’re going to own you next.”

“These schools have endless endowments. They can do this forever. They can outbid anyone. Do we want to just be a community of elite schools?” – Doreen Pearson, owner Stanton House Inn, 76 Maple Ave

“To me it’s gone overboard and is having a negative impact,” Camillo said.

In the end Camillo said he’d like to continue the discussion and would reach out to the Assessor and P&Z for information.

In addition to the upper school at 95-100 Maher Ave, and lower school at 1251 King Street, Brunswick owns:

In addition to its main campus at 200 North Maple, Greenwich Academy owns: