Greenwich Academy’s master plan is in full swing this summer.

The project includes demolishing and reconstructing the lower school and expanding the upper school.

The reimagined campus, which also includes a larger library, will not only result in new buildings, but renovations will support collaborative and small group learning, and pedestrian systems will be designed to foster impromptu interactions.

The existing Lower School was built in the 1970s. Head of School Molly King described the building to the P&Z commission in January as “an aging building and doesn’t smell very good.” She said teaching and learning have evolved, and there is a focus more on open flexible spaces and collaborative and small group learning.

Despite objections from neighbors, the school received permission from the Town to move its Cowan Center daycare to 96 Maple, and to demolish houses at 176 North Maple and 2 Patterson Ave.

The demolitions free up Floor-Aria-Ratio (FAR) on the main campus at 200 North Maple, though the project overall will not result in an increase in enrollment.

The current Cowan Center is located in a former carriage house, which is outdated, has inconsistent temperatures between rooms, and a steep set of stairs to be navigated by toddlers.

Neighbors had argued unsuccessfully that converting the house at 96 Maple to an institutional use was inappropriate for the mostly residential neighborhood. They also said that the existing Historic Overlay for the house was approved when it was residential.

In any event, the Historic Overlay requires the exterior to remain unaltered.

The Cowan center will offer subsidized pre-K and daycare to 50 children of teachers at Greenwich Academy and Brunswick from 8 weeks old to 4 years old.

This summer while many residents are away on vacation, those who remain go about their business amid roadwork, detours and construction in all parts of town.

Neighbors on Maple Ave say the Greenwich Academy master plan project has taken a toll on their quality of life. 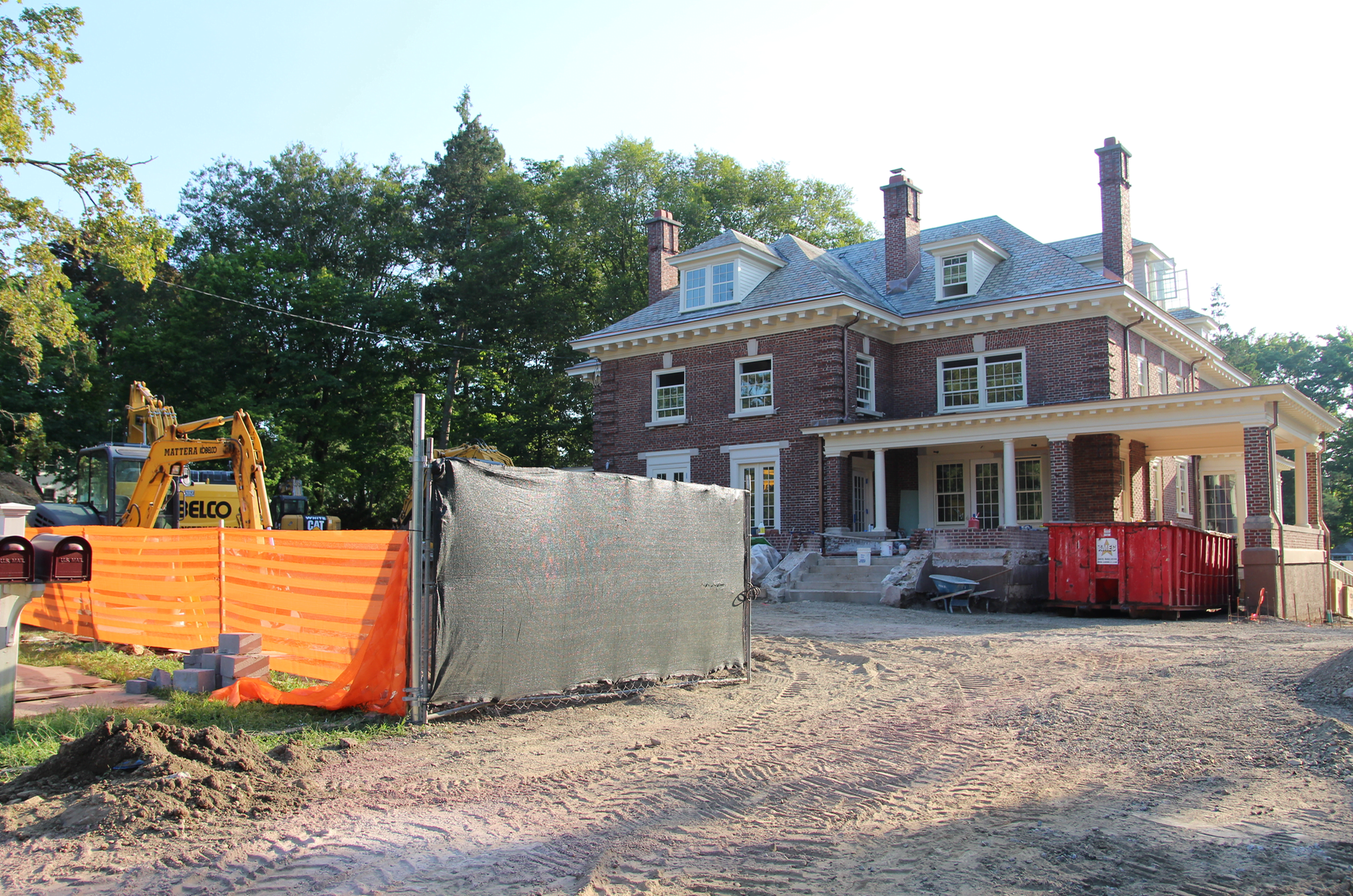 96 Maple photographed on Aug 21, 2019. Landscaping has been removed in addition to two of three mature Maple trees out front. In June 2018 Greenwich Academy purchased 96 Maple Ave for $2,800,000 from Michael and Christopher Constas. The house which dates back to 1910 and has a Historic Overlay, will be home to Greenwich Academy’s Cowan Center, a daycare center. Upstairs there will be faculty apartments, which are an important incentive to attract teachers

At 2 Patterson, the house neighbors referred to as the “ghost house” because the school cut off its utilities years ago was demolished this week.

The property abuts the school’s main campus, and by demolishing it, valuable FAR is added.

The school also recently demolished a house adjacent to the main campus at 176 Maple Ave. That space will be maintained as grass and be used for parking no more than 15 times a year. 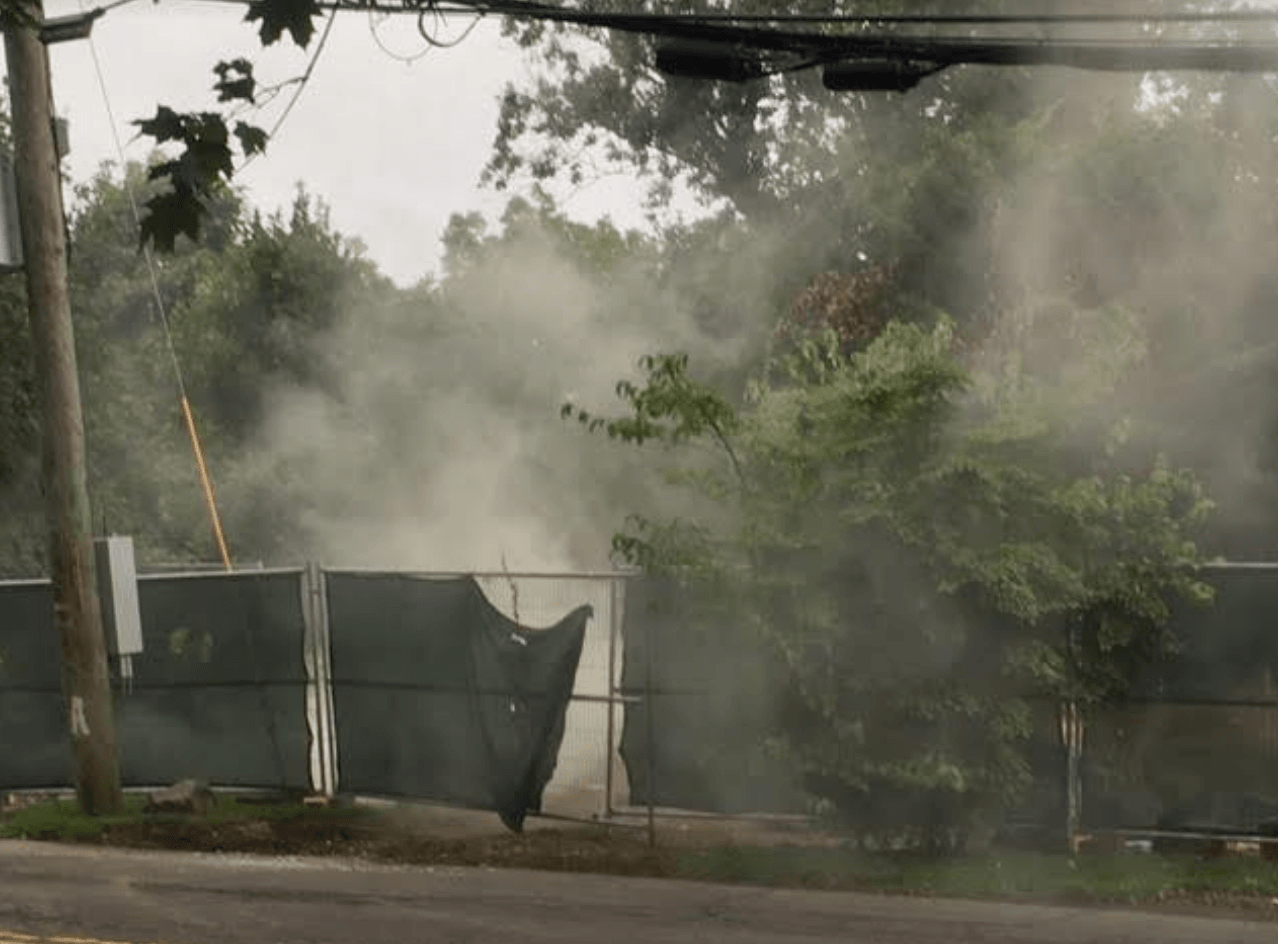 Dust from stone cutting at 2 Patterson where a historic house was demolished this week. Aug 21, 2019. Contributed photo 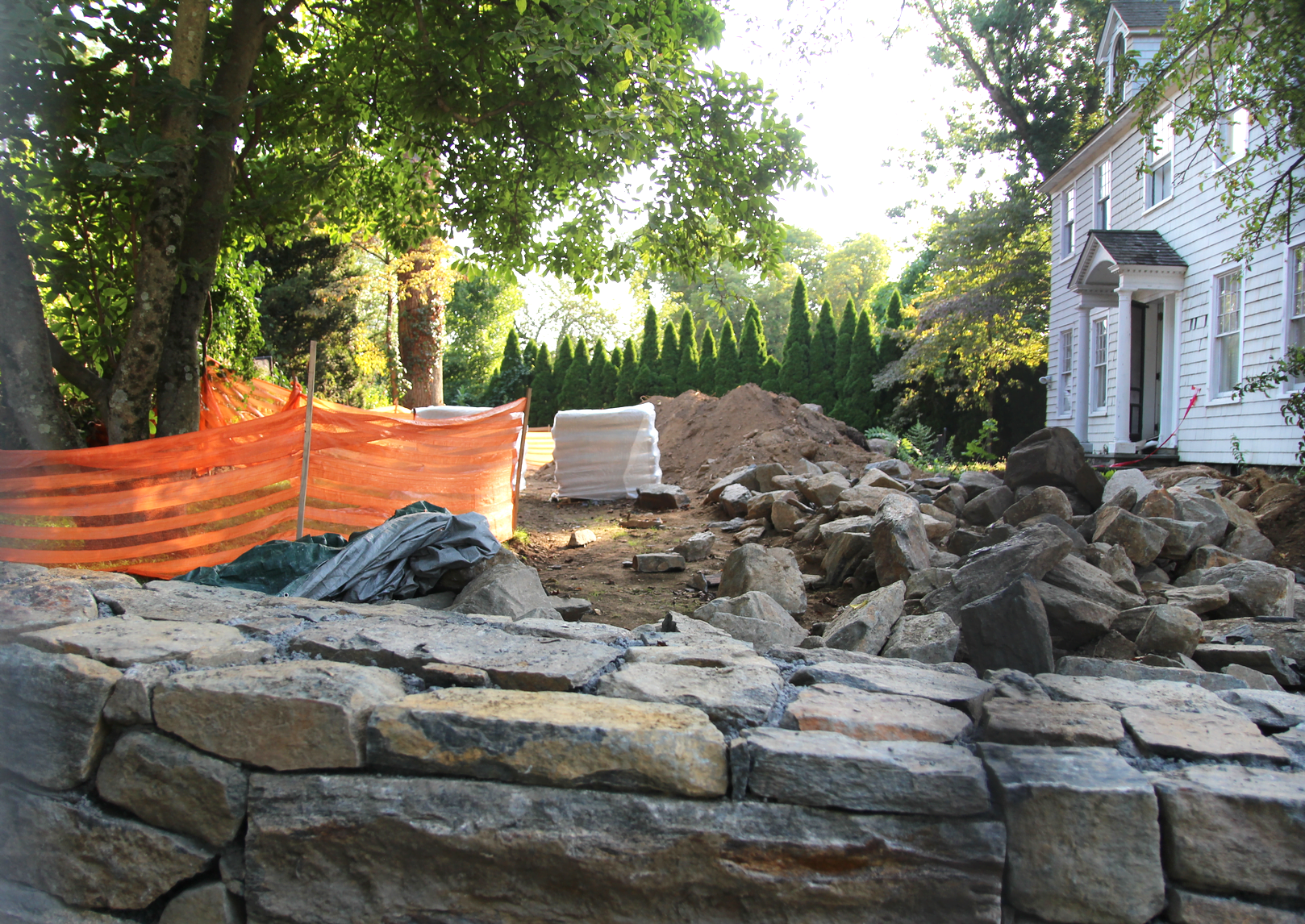 2 Patterson photographed in the evening after dust has settled. Aug 21, 2019 Photo: Leslie Yager 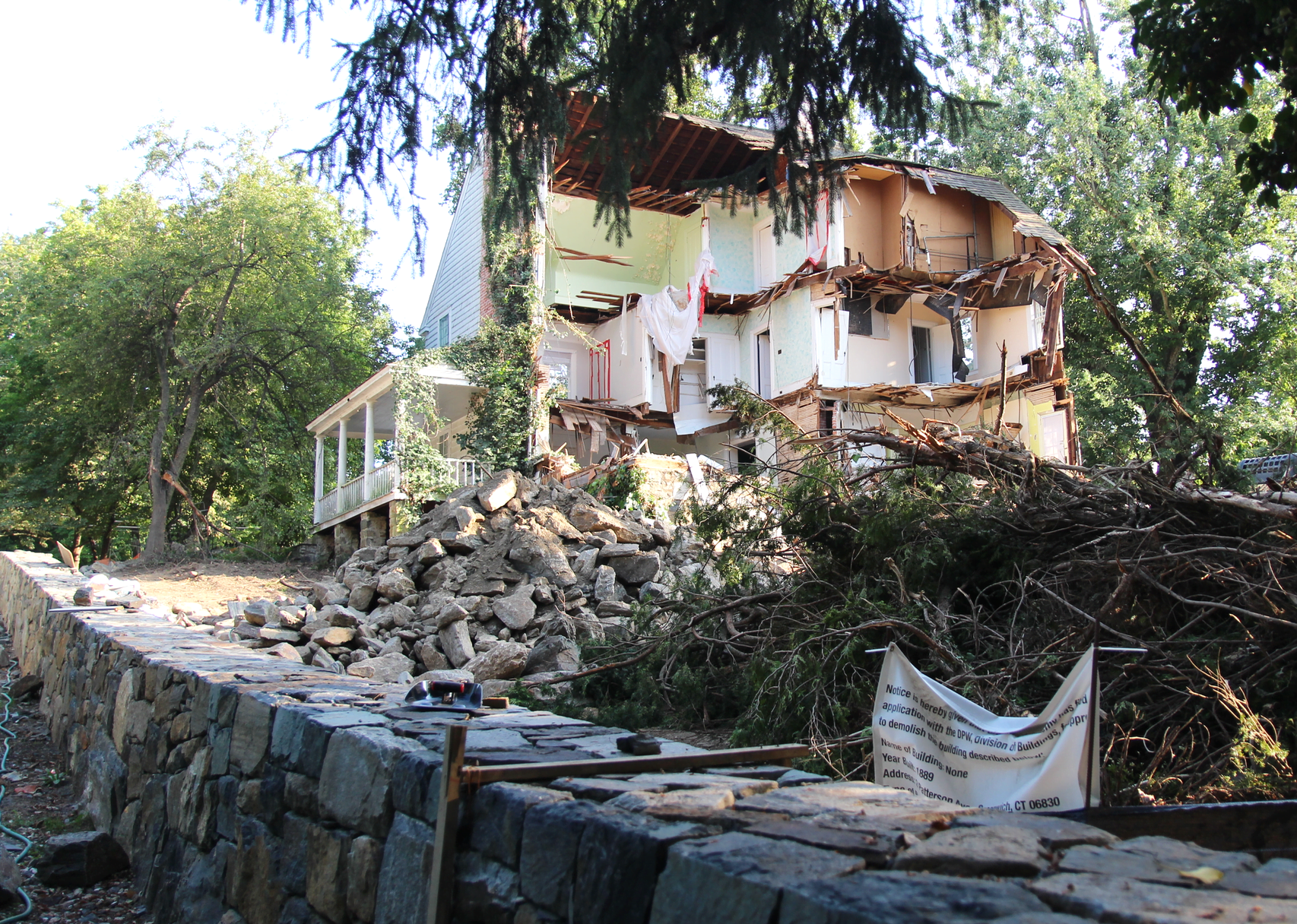 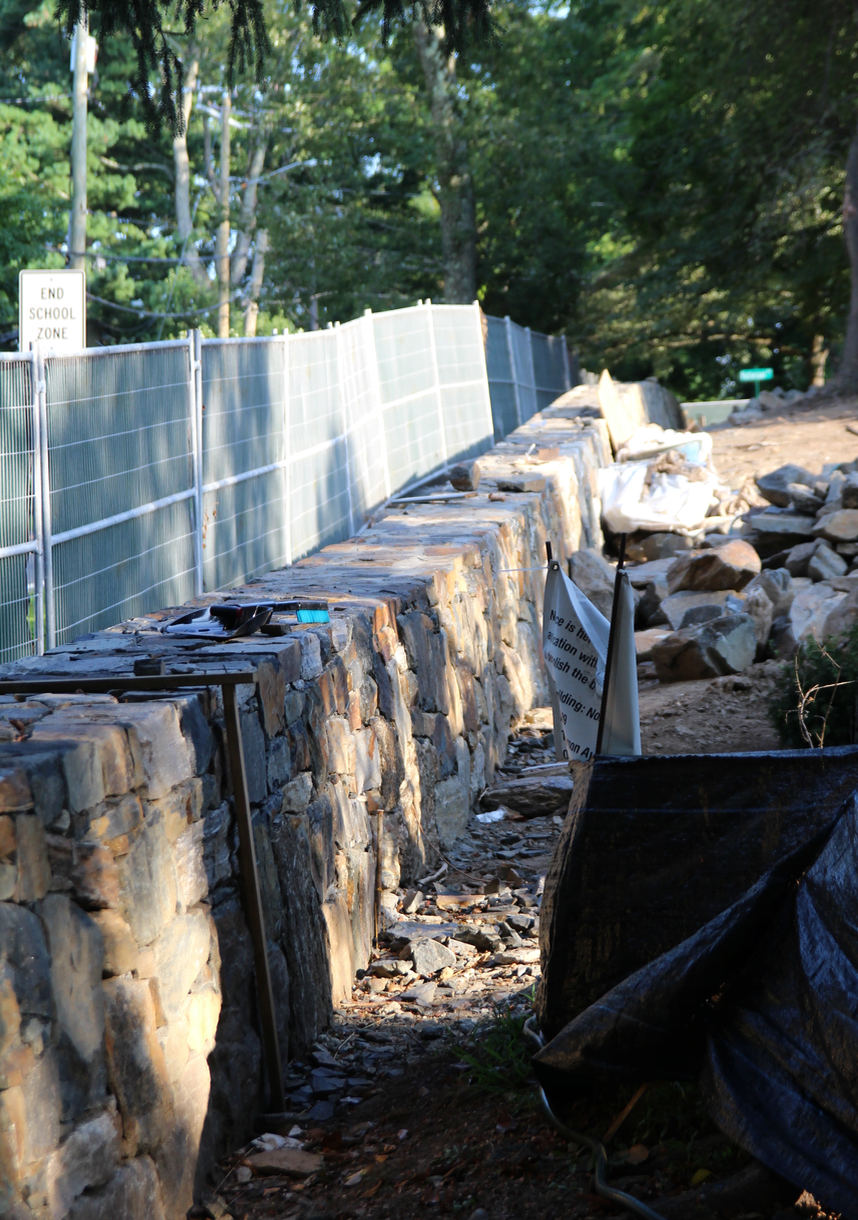 Ellen Brennan-Galvin and her husband Bill Galvin of 136 Maple Ave said that seven days a week the noise of stone cutting at 2 Patterson and 96 Maple is deafening and the soot and dust make it impossible to open their windows, much less sit outside on their patio.

“The neighbors have been trampled,” said Mrs. Brennan-Galvin. “Large boulders are being cut in situ. I didn’t sign up to have a quarry in my back yard.”

“We have endured nearly a month of six day a week stone cutting at 96 Maple Ave,” said Mr. Galvin this week. “I have just been informed by the workers at Greenwich Academy’s 2 Patterson Ave project that the stone cutting there will continue for another 3 to 4 weeks. The net effect is that we have lost the use of our property this summer.”

Mr. Galvin said nowhere in the Greenwich Academy application materials for either project was it indicated that significant stone cutting would be involved in the creation of any of the walls proposed.

“This may be a gap in the neighbors’ understanding of what is involved in such projects, but clearly a local quarry operation is not acceptable in a neighborhood,” he said.

Ms. Brennan-Galvin said that she and her husband met with a representative of Greenwich Academy this week and were told that the stone masons would use more water to wet down the stone being cut to keep the dust down.

On Wednesday evening Greenwich Academy’s director of communication Asha Marsh said in an email that heavy construction at 96 Maple should be completed by Labor Day.

“We are still planning to have this building ready to open as the new Cowan Center at the start of school,” Marsh said, adding that because late summer is not a good time for new plantings, landscaping of this area will take place later in the fall.

“We have asked our masons to move further away from Patterson Ave and to increase their water usage to eliminate dust,” Ms. Marsh said. 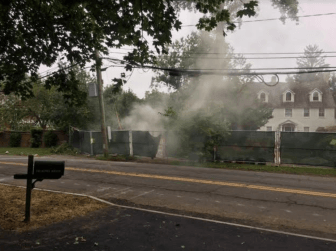 She said the next steps at 2 Patterson are to remove debris and grade the property.

“As always, we seek to actively engage with our neighbors by communicating our plans in advance, making ourselves available to answer questions, and working to minimize the disruptions to the best of our abilities,” Marsh said in the email. 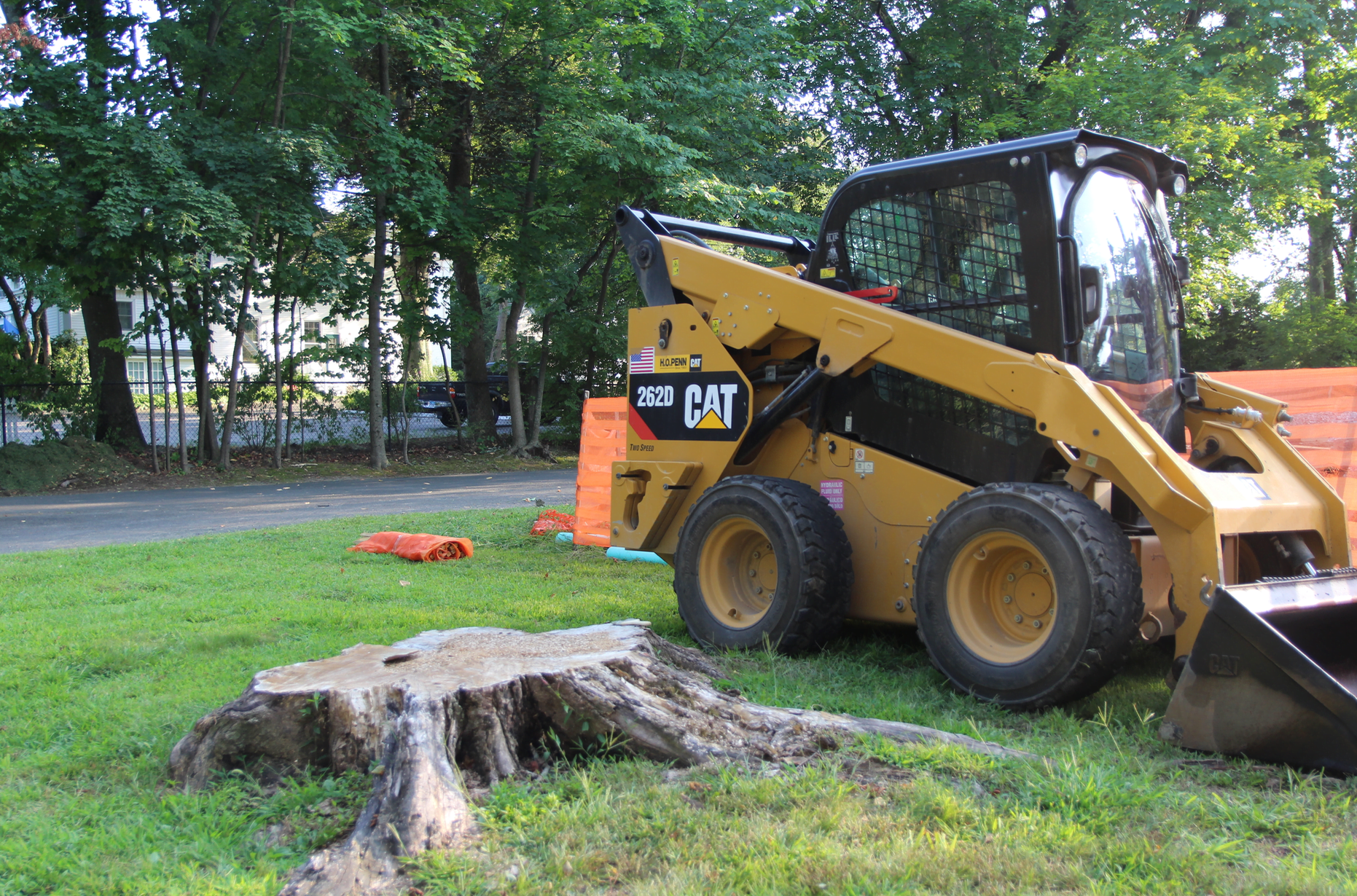 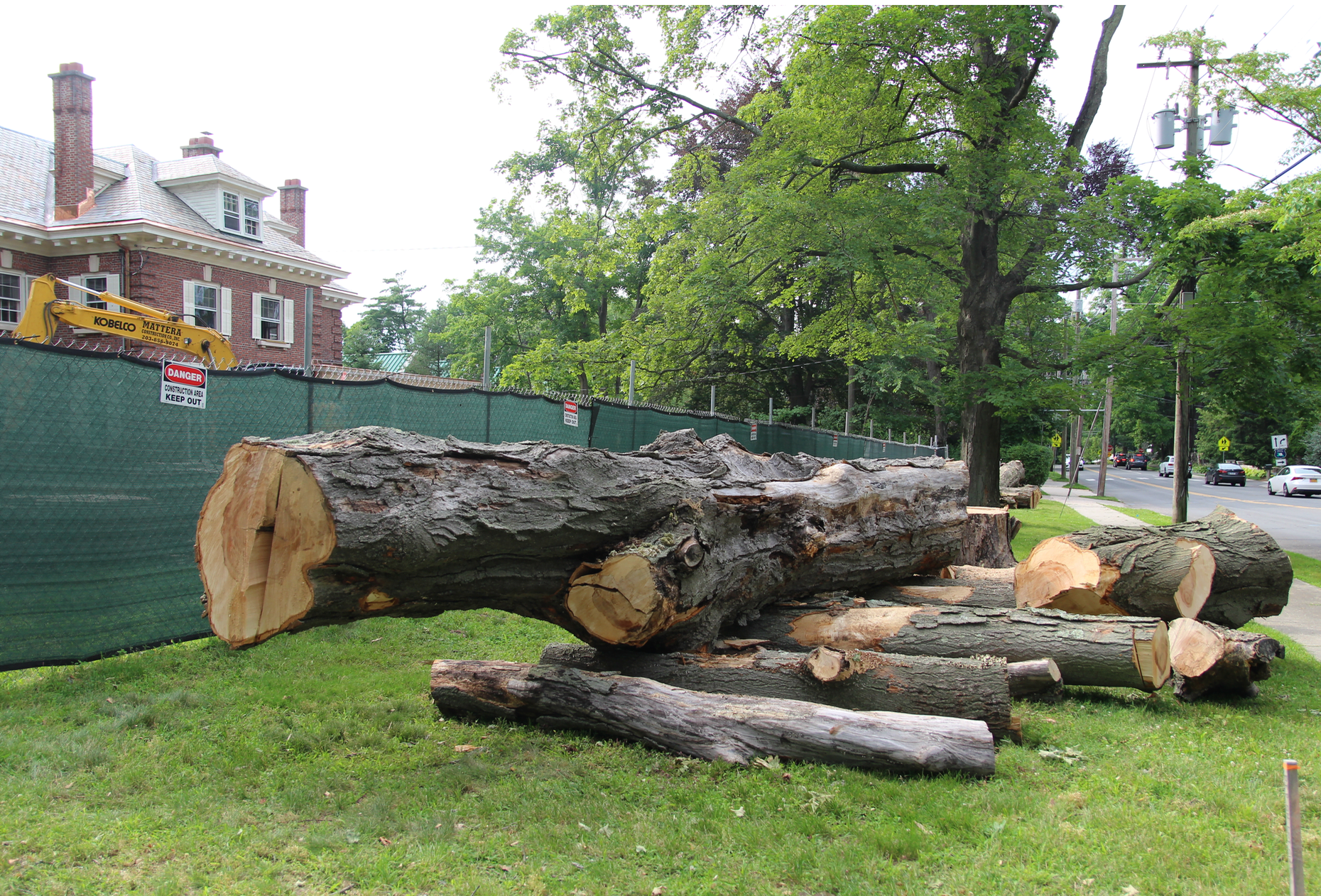 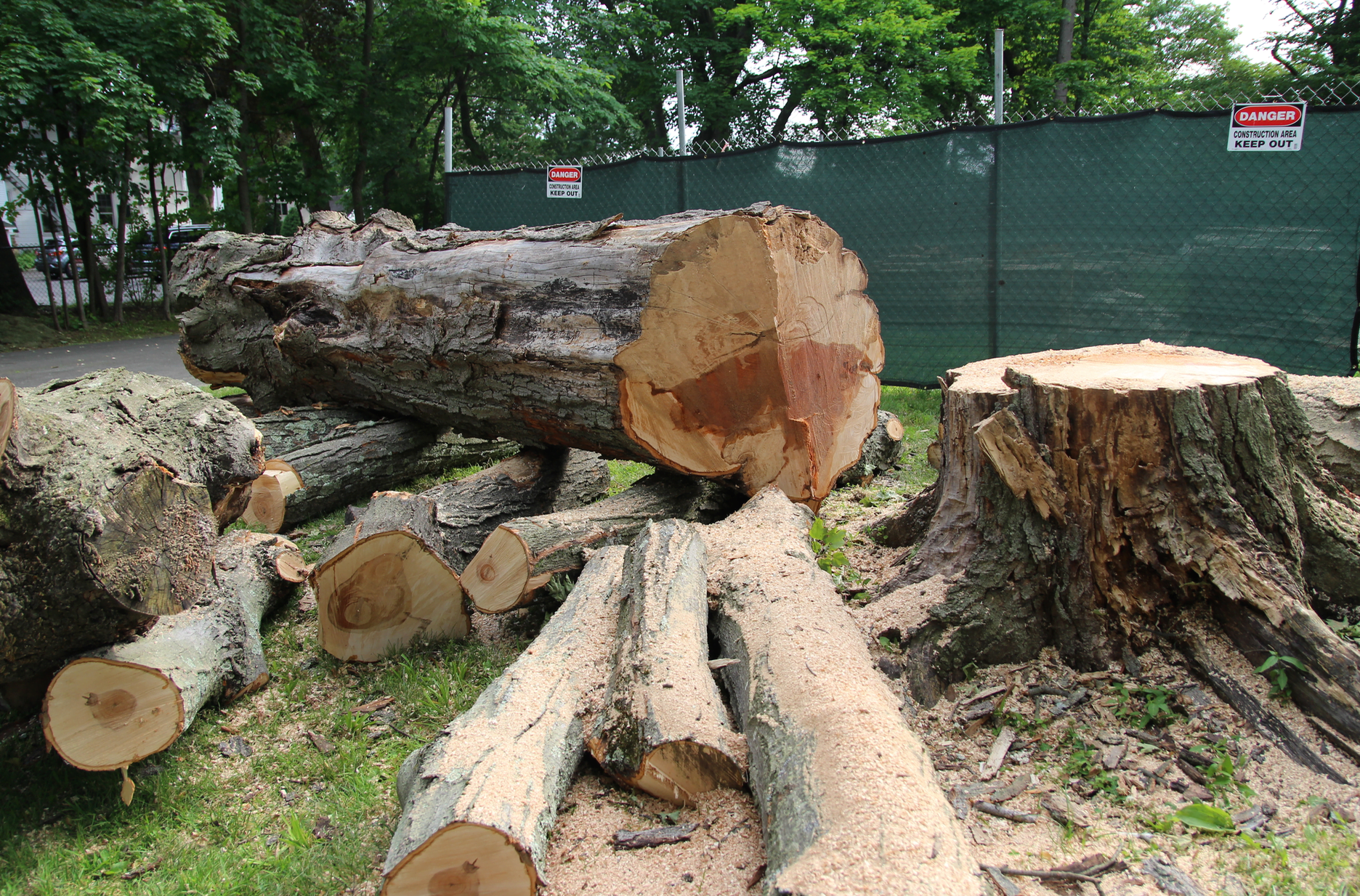 The Galvins said they were surprised and dismayed when back in June, Greenwich Academy cut down two mature Maple trees in front of 96 Maple.

“Instead of preserving the streetscape of 100 year old Maples in front of  96 Maple Ave they have taken down two massive trees,” said neighbor Bill Galvin at the time.

“The men doing the cutting observed that while there were some upper limbs that were dead, they could have been removed, preserving the trees – probably for another few decades. Supposedly, there will be ‘replacement’ trees planted — probably 4”-5” caliper versus the 24”-36” trees they removed,” Galvin said.

“Another example of GA’s extraordinary effort to preserve the character of the neighborhood in which it operates.”