UPDATE: This article has been updated to reflect that the vote on the SOMR was 101-89.

On Monday night, after nearly three hours of comments, mostly in the allotted three minutes per speaker, over 40 people shared opinions on a resolution against tolls in Connecticut. 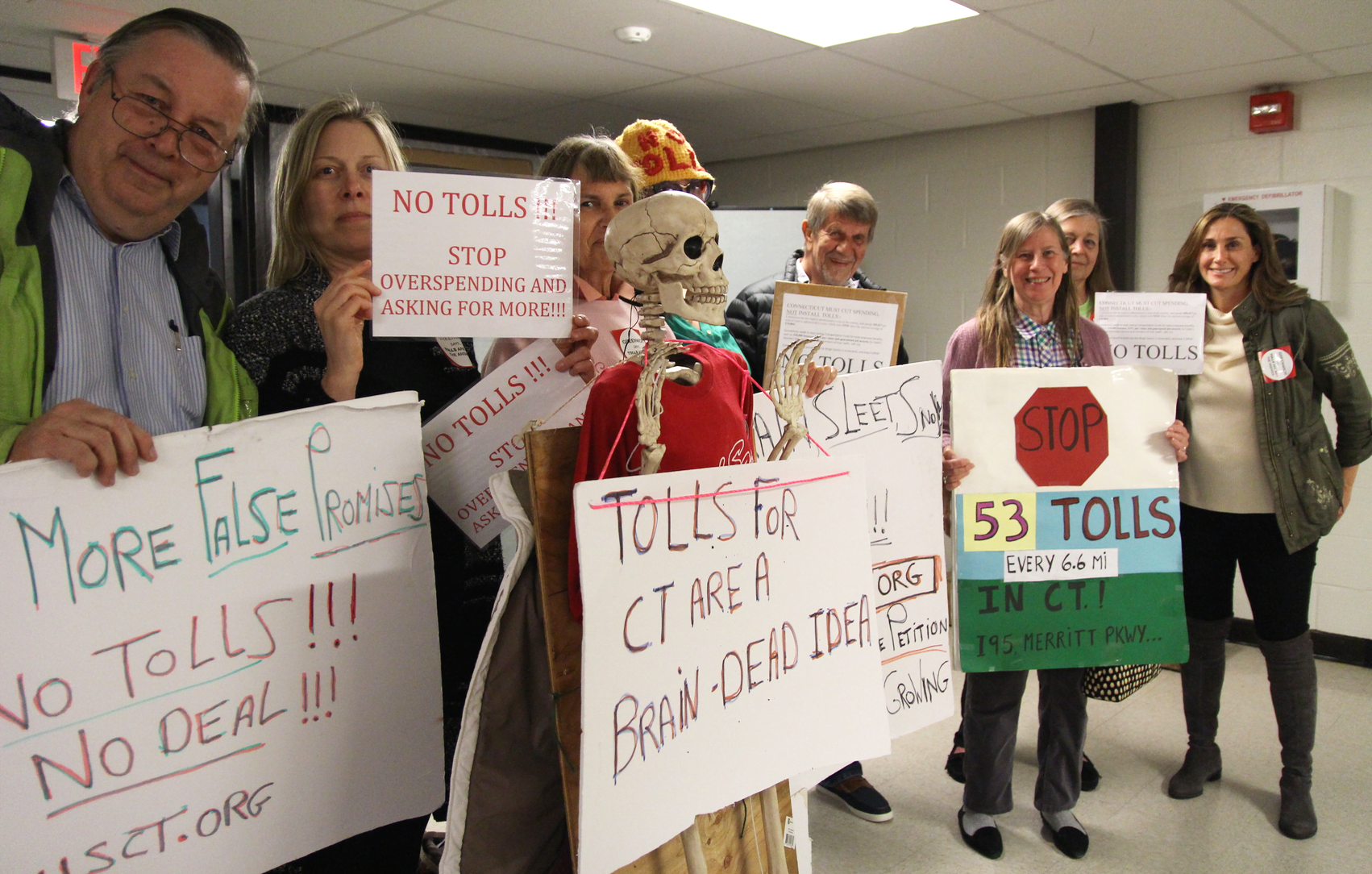 As the 230 strong Representative Town Meeting members filed through the lobby to the meeting at Central Middle School, it was hard to miss the anti-tolls crowd. April 8, 2019 Photo: Leslie Yager

The vote was 101 to postpone indefinitely, and 89 against postponing. There was one abstention.

The anti-tolls group, many who are part of No Tolls CT, are passionate. Monday night they were a visible presence with literature and posters. Again Hillary Gunn’s now famous yellow and red “No Tolls” knitted hat was hard to miss.

Having staged numerous rallies across the state, and making their presence felt in Greenwich with no tolls lawn signs, a strong social media presence and online petition, the result of the vote to postpone had to have been disappointing.

This week, the motion to postpone the resolution indefinitely was made early in the meeting, after both the proponents of the anti-tolls measure represented by State Senator George Logan from the 17th district which includes Ansonia, and the opponent of the measure, State Rep Steve Meskers (D-150) each had ten minutes so present their case.

Logan noted that nine communities out of 169 in Connecticut have passed resolutions against tolls. He warned that with toll gantries on I95 and the Merritt Parkway, Greenwich residents will have safety and environment concerns resulting from drivers coming off the highways and using local roads.

In fact that was a key theme of the anti-tolls proponents.

Logan also said that in addition to paying the cost of tolls, Greenwich residents who often get on I95 at one end of Town to drive to the other, will also get the squeeze when businesses pass the cost of their tolls on to customers.

“People will quit their jobs or find alternate routes through local roads. Many people are having a hard time paying for gas,” Logan warned. “People on fixed income will suffer the most.” 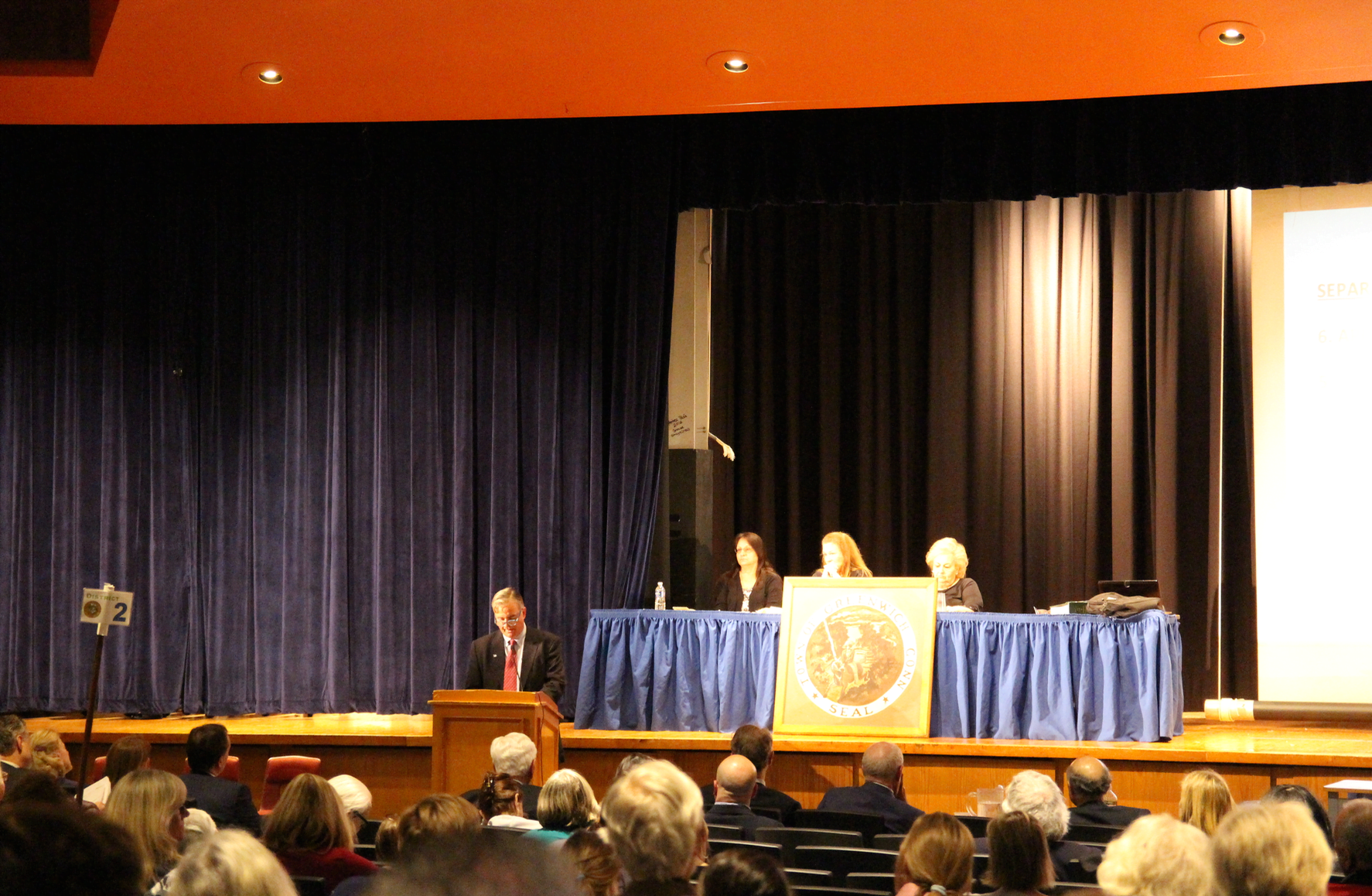 State Rep Steve Meskers spoke before the RTM as an opponent of the anti-tolls resolution. April 8, 2019

Meskers said Republicans and Democrats are concerned about the poor state of Connecticut’s transportation infrastructure. He said to bring roads and rails to “an acceptable standard,” $65 billion needs to be invested over next 30 years.

“That equates to roughly $2 billion of spending annually on our failing infrastructure, which includes roads, bridges and mass transit.”

He said the $65 billion figure came from the Republican Prioritized Progress Plan, which calls for borrowing $750 million annually in general obligation bonds to cover the needed expenditures. Over 10 years that adds $7.5 billion to the debt balance and over 30 years roughly $22 billion in additional debt with no other source of repayment than you, the taxpayers.”

“This added debt burden will jeopardize our credit rating and scare off private investors in our state,” he added.

“I don’t think we should put state and federal issues regarding legislation on the call. Our RTM has been non-partisan,” said Lucy Krasnor of District 5, adding that putting Sense of the Meeting Resolutions (SOMRs) on issues that are not Greenwich centric, but rather state or national issues, such as paid family leave, would set a precedent.

“What will be next month’s SOMR? Early voting? Where will it end? The RTM should deal with important matters that deal with out Town,” Krasnor said.

Also she said there wasn’t yet enough information to take an informed vote. “We have not had public forums, educational meetings about this matter. The bills in Hartford are not finalized….If you don’t like tolls, call your representatives.”

Ms. Kostin said, despite the anti-tolls lawn signs, “I have gotten only one email for the SOMR and one against. While the proponents may be outraged, my district does not appear to be.”

Karen Giannuzzi warned the issue has become a distraction.

“Everyone should stay in their own sand box,” she said. “If you have a strong feeling, go to your state legislators.”

Speaking in favor of the resolution against tolls was Frank Farricker, a lifelong Greenwich resident, who said, “As a Democrat, I believe government has a strong role to play in making society better. We do need to make upgrades on our infrastructure, but we must do this in a way in which all 3.5 million residents share equally…”

Farricker said tolls will increase income inequality. “I believe it will be a social injustice and expand burdens on the less fortunate, particularly in cities, …and particularly impact the working poor for whom our state practically mandates long drives.”

He added that Greenwich’s high home prices push working poor out of Town, and that, for example, thousands of workers at Greenwich Hospital and Greenwich Schools who commute to more affordable towns will be asked to pay more.

“I believe this burden would reroute traffic through our Town,” Farricker said, adding that congestion pricing is a theory designed for long distance travel.

Stamford resident Patrick Sasser, founder of No Tolls CT, said the anti-tolls movement included Democrats. He said he was proud that his city was one of the first to approve a non partisan resolution against tolls.

“It is time the local municipalities have a voice and speak up,” Sasser said. “Connecticut is the second highest taxed state. We have almost 100,000 signatures on our online petition, and 7,000 written statements to the Transportation Committee.”

“We’re all responsible. In the end, roads benefit all of us. It’s a collective responsibility,” he said. “Tolls will hit the little man. They’re regressive and bad for business.”

Lucy von Brachel said it was unwise to “send messages through an RTM resolution.”

“With the plastic bag ban, we did research through committees and that brought compromises,” she continued, adding, “This is not yet fleshed out.”

Former Greenwich Conservation Commission director Denise Savageau said, “Fairfield County has the worst air quality east of The Mississippi. Most of it comes from traffic on I95. To have a fear that all of a sudden this traffic will spill into Greenwich? It’s already happening. Increasing traffic and pollution on local roads is already there. It won’t change. People are already getting off the highway every time it’s congested.”

Steve Kolenberg, from the Stamford Board of Representatives, said the anti-tolls movement in his city was non-partisan.

“You in Greenwich have a unique opportunity to be one of the most direct democracies in the country,” he said, speaking in support of the anti-toll resolution.

Karen Fassuliotis also spoke in favor of the resolution. “I’ve heard from teachers and town workers. Your vote on the SOMR will let them know it’s not okay that they pay more for the privilege of working here. We’ll all pay more for goods and services.”

David Cox from District 6, speaking against the resolution said, “Some motorists may decide to use local roads, but current laws prohibit through truck traffic on our roads. Tolls encourage carpooling.”

He said congestion pricing will encourage trucks to drive at off-peak times, and that technology can give credits to those in need.

Tolling is the surest way to keep the lock box locked,” Cox concluded.

Speaking in favor of the resolution was Republican Harry Arora, who ran against Jim Himes for Congress in the last election. “It’s a regressive tax that will create two classes of people – those who use the side roads, and those who use I95.

“Compared to the rest of the state we spend disproportionately higher per capita and per mile on transportation,” Arora said.  “The challenge is not that we don’t spend enough, but we don’t spend effectively.”

Republican Ed Dadakis said he’d been stopped in the grocery store and received multiple emails from people fearful of tolls.

“I’m in full agreement with my good friends Frank Farricker and John Blankley,” he said to laughter. “There is no more bi-partisan issue than the toll issue. …The problem in Connecticut is not that we tax or toll too little, but that we spend too much. These tolls and other proposals to tax show no signs of spending slowing down.”

State Rep Fred Camillo (R-151) said, “While the resolution is non binding, it is important for a Town as significant as Greenwich to send a message. I was here when the Mianus Bridge fell. People worked with Governor O’Neill (a Democrat) to set up a special transportation fund, which has been raided year after year after year. It’s still being raided,” he said. “The money is there. …Send a strong message to the General Assembly that we cannot afford another mistake like tolls.”

Monica Prihoda quoted a line from a song in The Music Man, “‘We got trouble right here in River City,'” she said. “Greenwich could be River City. There is a distinct smell of partisanship evident by the proliferation of no tolls signs that have popped up all over Greenwich. If the proponents of the SOMR against tolls are so concerned with the impact on low and middle residents, why not a SOMR to increase minimal wage substantially?” she asked.