On Thursday night P&Z held an open mic session at town hall for residents to give input to the 2019 Plan of Conservation and Development which is updated every ten years.

Aleksandra Moch of the Town’s conservation commission gave a snapshot of the town’s changing demographics and housing trends taken from the Partnership for Strong Communities.

Median age is 42.2 years old. Which is 2 years older than average for Connecticut.

Families are living together longer.

The cost of living in Greenwich is increasing.

Housing stock is 61.1 % owner occupied, 31% rentals and remainder is vacancies

Greenwich is short studio apartments and one bedroom housing

Moch said in the 1970s, development was to accommodate baby boomers expecting large families who expected to stay in Town.

“Now baby boomers are getting older and looking to downsize. This type of housing doesn’t address their needs,” Moch said.

42% of renters spent more than 30% of their income on housing.

Moch said spending so much on housing means little is left over for necessities including transportation, food, healthcare, etc.

Francie Alvarez from the Greenwich Tree Conservancy used the example of a magnificent 100 year old Copper Beech tree near Palmer Hill (part of the original Havemeyer Estate) that is in danger. Though the developer did not cut down the tree during construction of a new house, a deep utility trench damaged its roots. Debris piled up at its base put further stress on the tree. Also, she said, “They raised the grade plane 1.5 ft and the bark started to decline and bark loss moved up the trunk.”

She said Hartford was the first city to establish regulations to protect the tree canopy – with minimum requirements. Historically important and significant trees require a permit for removal.

“They clean out air, water and prevent flooding and erosion,” she said. “Yet in Greenwich we have minimal regulations to protect them. …Our largest, oldest and most significant trees provide the greatest percentage of canopy and can increase property values, yet it’s not protected as a valuable asset to our community. We continue to lose trees after 2-5 years after construction.”

“Greenwich must include in 2019 POCD protection of our trees on all lots, big and small, and set community goals for reforestation,” Alvarez said.

Mark Pruner, a realtor who works extensively with developers complained that the level of complexity that has increased over past 15 years.

“The path to unaffordability is paved with good intentions,” he said, adding that the permitting process is lengthy. “When it’s necessary to stop work for weeks to wait for a building inspector’s visit, makes it more expensive to develop reasonable and more affordable housing in Greenwich. It’s resulted in the pushing out of long term residents.”

Pruner said the present process is expensive, lengthy and uncertain.

“There are people who want to use the Historic Overlay but don’t know if they use this expensive process what they’ll end up with at the end of the day,” he said. “Providing certainty is important.”

Conversely he said, “We see daily houses that are out of compliance because they didn’t go through the process. They did it (construction) knowing it was in violation and want to sell and know it’s in violation.”

“Make it quicker, easier and more certain. That would preserve the character of the town,” he said.

Cheryl Dunson of the Greenwich Tree Conservancy talked about water and erosion in relation to the tree canopy.

“When storm water falls on a wooded lot, the lot would retain much of the water, but if it runs onto a man made surface it would be channeled to the nearest catch basin and accelerate erosion and pollution because it picks up contamination en route,” she warned.

She said residents have been flooded as the result of adjacent construction.

“These issues can be effected by the landscape and by protecting the tree canopy,” Dunson said. “In the 1970s builders selectively cut trees that were required for the building envelope. We now have death by 1,000 cuts. Or the lot is clear cut completely so it’s easier to build a house.”

Dunson said she was also disturbed to see the clear cutting along I95 between exit 3 and 4 which was done in advance of a replacement of a town sewer line.  The Dept of Transportation does not want to replace the trees after the work is done because they will then be liable. However, the trees provided both a noise and sound barrier in addition to being aesthetically pleasing.

“Did it require clear cutting of all those trees?” Dunson asked.  “Could some of them been spared. …We don’t even know how many were cut down. We do know that one piece of infrastructure was replaced, while one for noise abatement and pollution was eliminated.”

Mike Warner said the language of the POCD is too general. “It’s not something that gives you enough direction to prepare your regulations from. Have it be as specific as possible to give you direction.”

Mr. Warner’s point was echoed by others who were more blunt.

“Why are we doing a POCD if we don’t enforce it?” Don Conway asked. “Our ZEO’s do absolutely nothing. For three years I’ve complained on our block about violations: lights too bright well into the night, garbage from industrial areas, they don’t care.”

“Put a big paragraph in there for teeth,” he said. “And get another enforcement officer or two to go out there” Mr. Conway received a round of applause.

Katie DeLuca said it was unfair to blame the zoning enforcement officers, who are hamstrung by a process dictated by the state in which they have to write a warning letter and wait a set number of weeks before proceeding.

“There is a long process involved in enforcement,” she said. “You could ask to note in POCD to work with state legislature to change how violations are handled.”

“We’ve heard a lot about trying to define specific projects outlined in POCD rather than plans and conceptual drawings… we need to identify specific projects in the plan that the town needs to follow through on,” Kral said, adding that there have been references to projects like a new fire house, but no real direction in the POCD.

Kral pointed out that Havemeyer Field behind between town hall and the Havemeyer Building (home to the Board of Education), could benefit from a multi purpose field that would suit a number of playing activities.

“It would be artificially turfed,” he said, adding that there is room for up to 1,000 parking spaces. He said it would be a good location for a community center and would attract young people.

“We hope this POCD will initiate that kind of thought, make Greenwich cool again, and make downtown vital through proper planning.”

Dean Gaminos who is an RTM liaison to Parks & Rec, talked about historic preservation and shortage of fields in Town.

“I see a lot of people trying to attract people to our town through a PR campaign and other means,” he said. “Please consider the historic buildings and preserving them. We talk about this a lot, but can’t seem to come up with a solution to the wrecking ball. Maybe offer tax incentives for work that’s done to preserve some of our older structures.”

Citing the shortage of fields in town Gaminos said, “Maybe we need more parks. Why not build upon that legacy and add more parks and playing fields so there isn’t a waiting list. It would be an appealing point to people considering moving to Greenwich.”

Laura Gladstone said she was concerned about the limited water supply given the increased construction of multi family housing.

“Without all these multi family buildings, I’m worried about our chronic water shortage. It’ll take a toll if we bring in more commercial development and multi family dwellings.”

DeLuca pointed out that three or more units is no longer permitted in multi residential zones.

“But multi family development in commercial zones or the villages is still an option,” she said.

“We want to bring in more millennials, but if you look at Stamford and Norwalk, there’s a lot of vacant apartment buildings. Why would it be different here?” she asked. 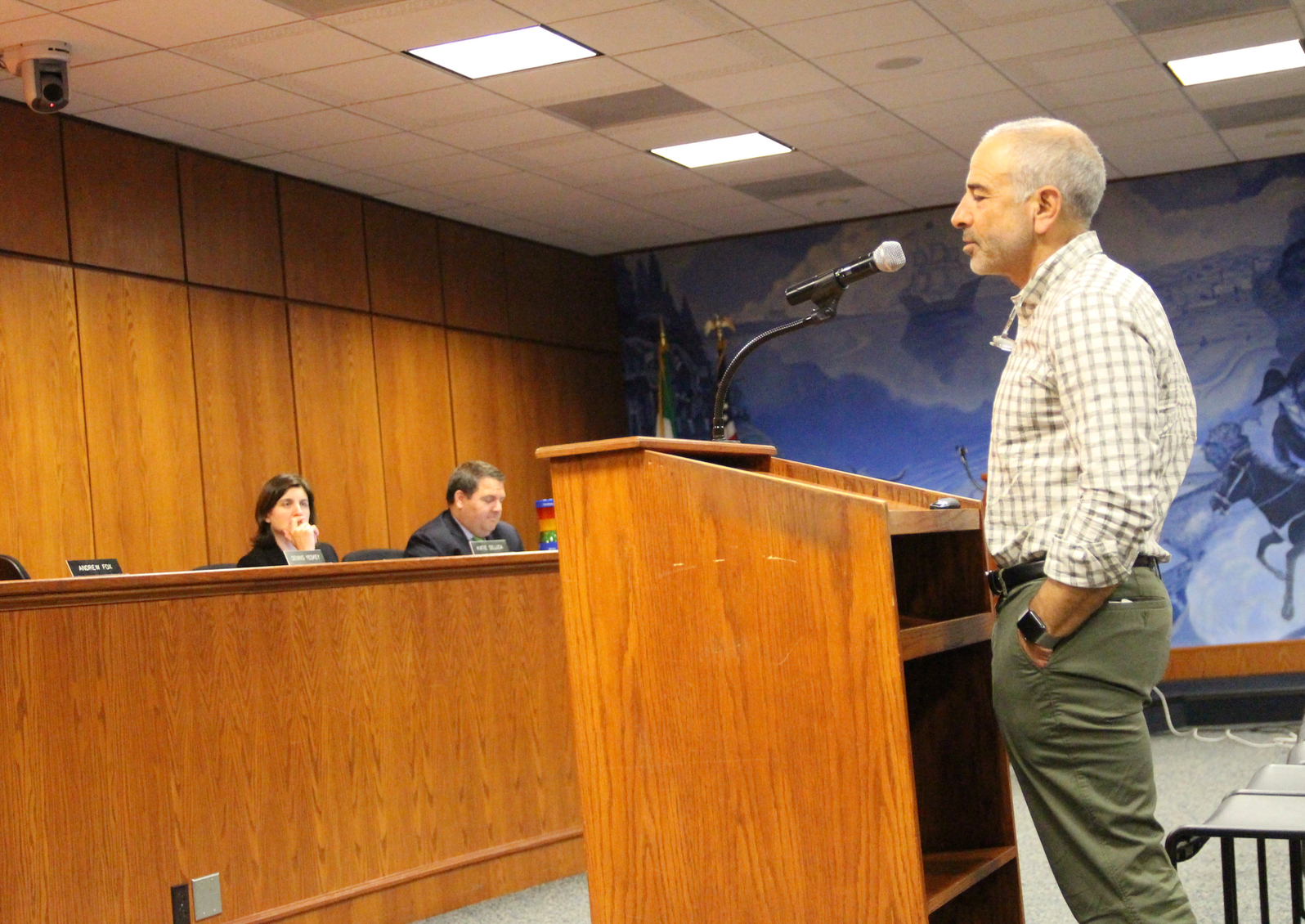 Paul Pugliese, a realtor and developer said the POCD needs to be “re-synchronized to the regulations.”

“The town of Greenwich is a complex organizational system,” he said. “There are a lot of moving parts. And a lot of parts are in conflict because of the regulations. The reasons lots are being clear cut is because of the grade plane. The drainage manual is also responsible for clear cutting and historic houses trying to do a minimal addition and don’t comply with the drainage manual.”

Mary Hull who has been director of Greenwich Green & Clean for 31 years said she’d spent innumerable hours on the last POCD.

“There were many times we’ve been told ‘It’s never been that way.’ I left thinking why do we set the standards for downtown Greenwich on one of the ugliest and least aesthetic periods of our development? Why do we have to have flat roofs and attach the buildings instead of going between them.”

Hull said there was a “smashing plan” for Ralph Lauren that was rejected.

“It was a free standing, almost house-looking building as if from the 1900s. But everybody said it had to have a flat roof and be attached to buildings next to it.”

She said she understood P&Z’s focus on adequate parking. However, she said, “We need more trees and less vehicles. We worry so much about the number of parking spaces that we don’t worry about trees.”