The owners, Albert and Heather Jagodzinski, received a cease and desist order from the town Zoning Enforcement Officer because they only have approval for their automotive repair business, not explicitly for towing.

They seek a final site plan and special permit for the both the ongoing repair and towing in the GBO zone, which stands for General Business and Office. 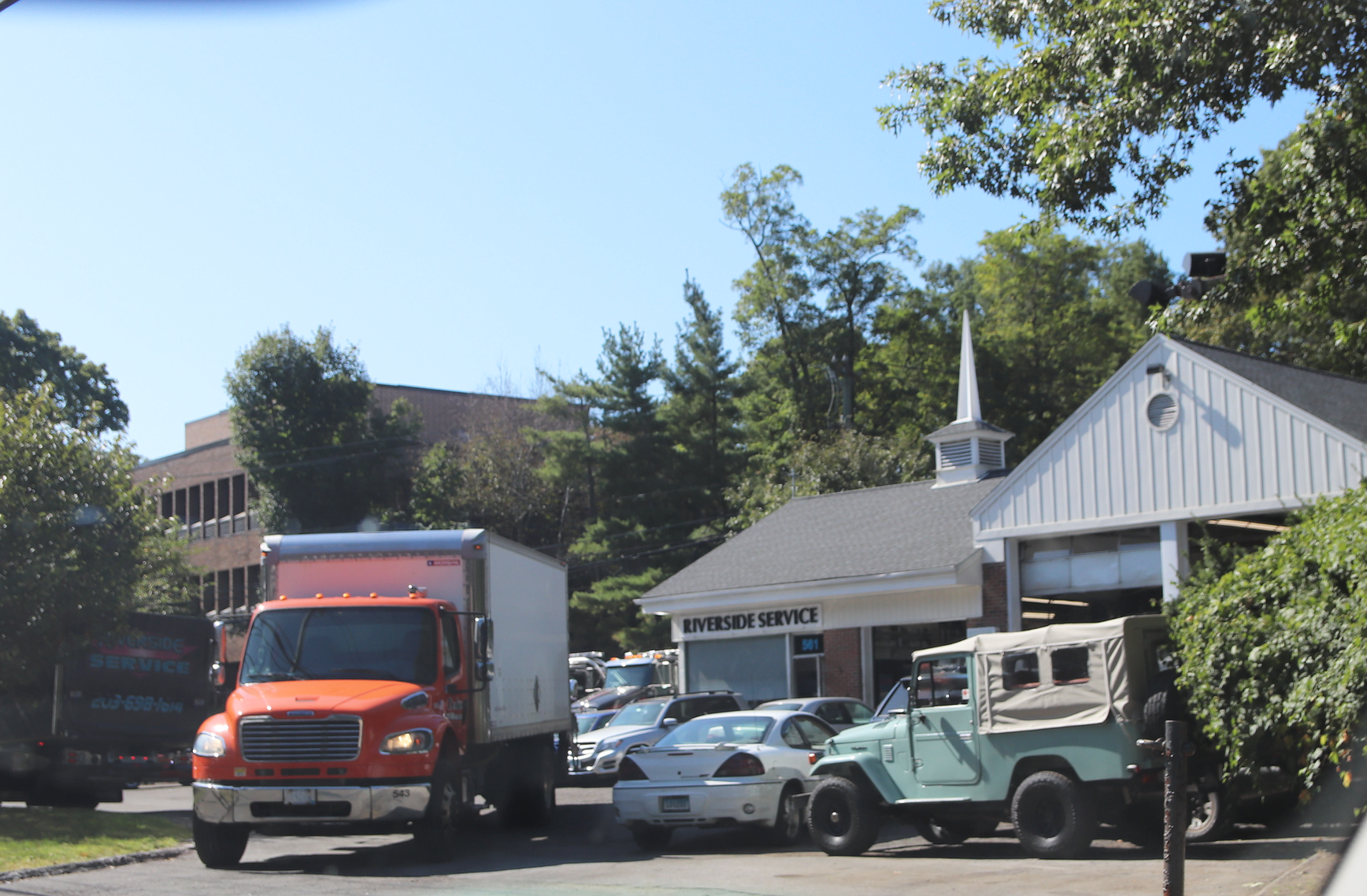 The application boiled down to whether towing is an allowable use. There is no mention of towing in the Town regulations.

Riverside Towing has a contract with AAA, which amounts to 11,000 calls annually.

Not all of those result in a tow. Many calls are from people who lock their keys in the car or need a jump start, for example. Most vehicles are towed to the Jagodzinski’s storage facility in Stamford, including DUI’s, illegally parked cars and collisions. 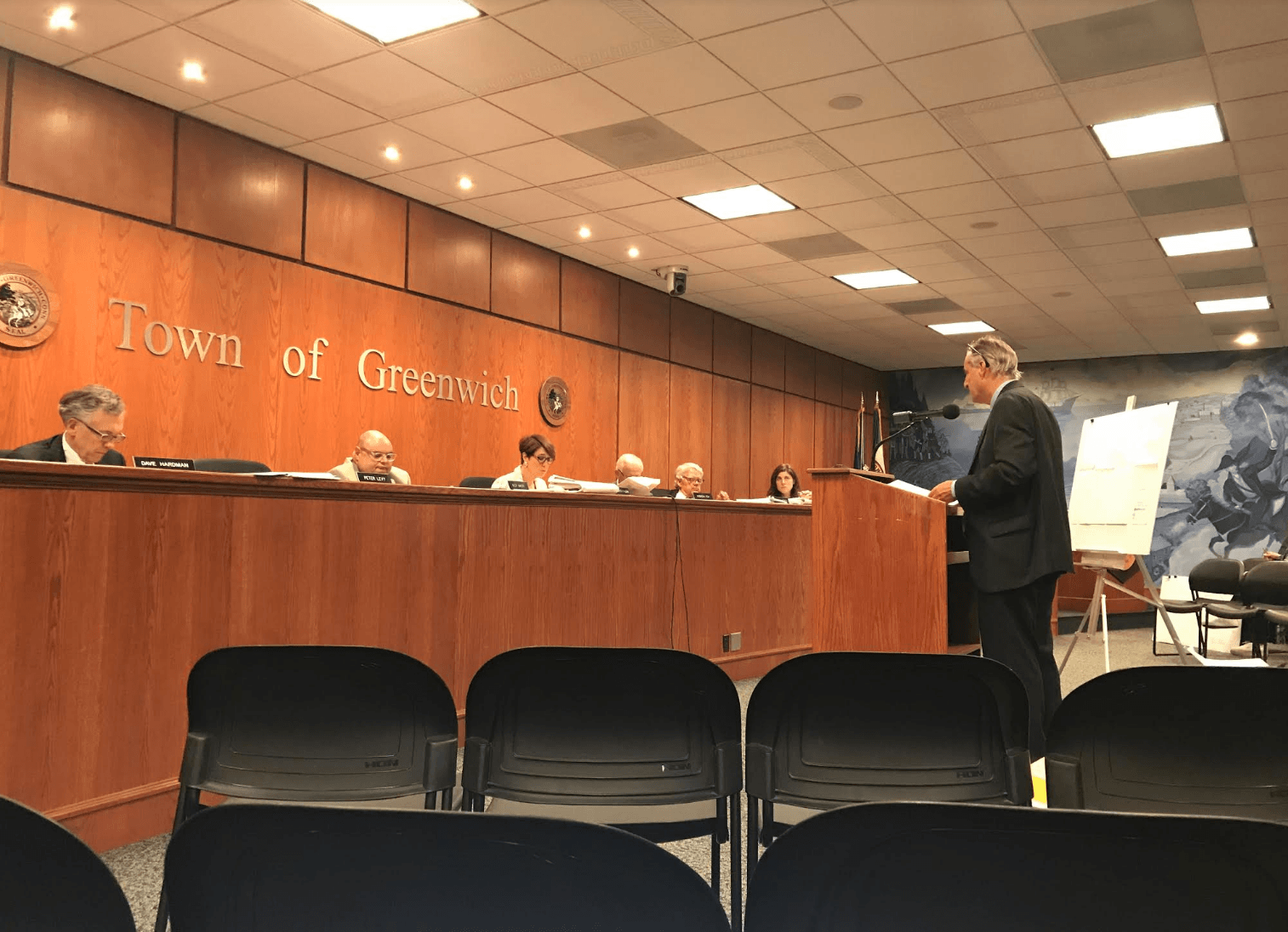 The Jagodzinskiss attorney Chip Haslun said the location has had vehicle service businesses in operation since before World War 2.

The Jagodzinskis took occupancy 5 years ago.

“Since the Oxers took over the building in 1983 there were historically cars and trucks parked overnight on this location,” Haslun added. “It seemed to my clients it was an acceptable use to park cars, trucks and their towing rigs overnight.”

Haslun noted that storage is a separate use from repair in the Town regs, but that the Jagodzinskis do not charge for storage for the cars they are working on.

Riverside Towing is on the Greenwich Police Department’s rotation list, which is a short list of towing operators who must respond immediately to police calls.

When they respond, they clean the scene of accidents, whether it be broken glass or scattered car parts, and then tow the vehicles to a car storage lot. They tow from the scene of DUIs and crashes, and respond to calls from the Town about illegally parked cars. Cars are towed to a storage lot in Stamford.

Despite the cease and desist order, the applicant is allowed to continue to operate because they are taking steps to remedy the situation.

Haslun said the Jagodzinskis first started their business 27 years ago, and since then, there has been a reduction in repair shops and towing companies in Greenwich.

Riverside Towing is the only repair shop and tow operation based in Greenwich. “The others have no space,” he said.

The implication is if Riverside Towing is not allowed to continue to operate from 561 West Putnam, it could take longer for a tow truck out of Stamford or New York to respond to emergencies in Greenwich.

“They perform a tremendous service for individuals broken down and they respond to Greenwich Police,” Haslun said.

Opposing the application was developer John Fareri, who is seeking to develop 67 apartments on the next block over, at 581 and 585 West Putnam Ave and 500/600 West Putnam Ave across the street.

There is no reference to towing in the Town’s zoning regulations.

The question boiled down to whether towing is incorporated into service since it is not mentioned in the Town regs.

Mr. Fareri said towing was an industrial use not allowed in GBO and was “inappropriate” and “too intense.”

He also said the applicant is illegally parking vehicles in his lot at 500 West Putnam Ave.

“You may eventually need that parking,” P&Z chair Margarita Alban said. She instructed Mr. Ferari to discuss that situation with the applicant.

Mr. Haslun said Riverside Towing employees who park at 500 do have permission.

“My client says their property manager lets them park on the property in exchange for services,” Haslun said. 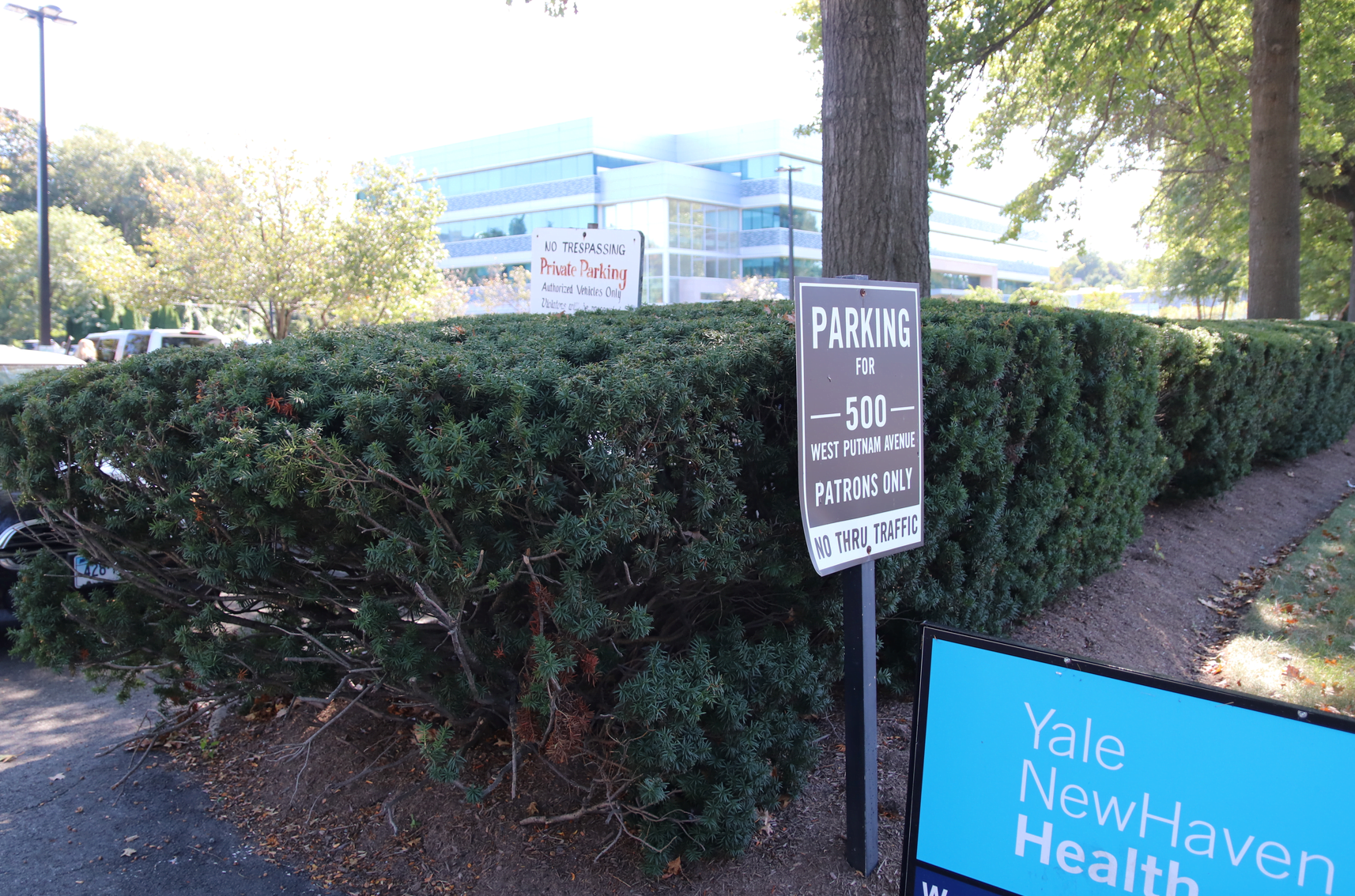 Is Towing a Use That is Part of Repair Service?

Ms Alban said unless the State says otherwise, towing could be considered part of the repair service.

“We thought towing was part of the service, and that’s how it’s been treated in the past,” she said.

To have a towing license you have to have a repair license from the State.

Mr Jagodzinski said the state requires him to have a facility, with lifts and tools, and the DMV conducts inspections.

The discussion became one of which came first, the chicken-or-the-egg.

Mr. Haslun acknowledged currently the property is legally nonconforming, with variances for setbacks and lot coverage. Also the parking is non conforming because it’s in the front yard, and it is not demarcated. It is also non conforming in terms of screening. And there is a sign where it is not supposed to be.

Haslun said the applicant agreed to create a parking plan for outdoor and overnight parking.

Right now there is no striping and cars and trucks are all over the lot.

“We could clean this up a bit. And I suggest we take it back to the engineer and landscape architect and take some suggestions to heart and get rid of two spaces in the front,” Haslun said.

Commissioner Nick Macri said everyone was on the same page about making the area more attractive, and the applicant has the opportunity to improve 561.

“Towing has to be on the Post Road. That’s where it has to be,” Macri said. “You wouldn’t want to put it in a residential area.”

Commissioner Andy Fox said, “We made a big push to landscape Putnam Avenue.”

“The key is that it not be an eyesore,” Alban said.

Haslun said he would work with the State to see if it is possible to landscape further, and that his client is willing to change the guard rail from metal to wood.

“Tow trucks don’t come in through Valley Drive because they can’t make the turn, but if we make it one-way they can come in and back up,” he offered.

“We’re clear this is a very vital service and they have the contract with AAA,” P&Z director Katie DeLuca said. “But people want the Post Road to look better. Sometimes people ask why there is a rule against parking in the front yard. This is why.”

Mr. Fox said provisions should be made for a sidewalk, especially given Mr. Ferari’s proposed development a block away. “Have your landscape plan include a sidewalk.”

“We’ve been thinking about sidewalks a lot,” Alban said. “But the key is to make the cars less visible.”

Eric Brower, representing Mr. Ferari, said the applicant had glossed over the history of the site, which he said was relevant to whether towing is a subordinate use to repair.

“The dimensions are deficient throughout and we don’t have the required parking,” he said. “It’s three bays, times five, plus one per employee. The minimum is 20 spaces.”

“It’s only been authorized for sales and service as a pre- existing gas station from the 1950s,” Brower said, adding that aside from the question of whether towing is a normal part of a service station, the history of 561 West Putnam includes a prohibition against  outdoor repairs.

“There is a significant repair going on outside in front of two or three bays as cars are being moved around constantly. …We have a violation of that, and ZBA has authority to modify conditions related to motor vehicle sales and services.”

Brower warned that if towing is considered ancillary to repair, that would potentially allow a towing operation to have a single repair bay and 1,000 trips a day and still be considered service.

Brower said, 10,711 service calls is an awful lot of calls and Riverside Towing has up to 8 or 12 trucks operating overngight.

“That is not typical of a 3-bay repair shop. The business is a lot more amorphous than we’re being told. There are trucks throughout town day and night. There are trucks in all places ready to jump onto I-95 and help people….It’s a 24 hour towing operation.”

“Everyone is agreeing we can work with 15 parking spaces and some trucks, but we’ve seen historically over a period of years, there has been 40 cars there and 6 or 8 tow trucks,” Brower added.

“In the past few days the parking on site has been reduced. That shows either the business dropped substantially or there are other sites that can handle these cars where they’re being towed to,” Brower pointed out. “A certain number of overnight vehicles make sense, and it makes sense to have tow trucks. Two or three maybe, but not eight.”

“The photos also show what layout you create with paint is unenforceable. The aerial photos show there is no circulation. Cars have jumped up onto the landscape area that used to be protected by a post and chain fence. …You have a chaotic, constantly in motion operation….I’ve seen trucks maneuvering across the Post Road,” Brower said.

“Let’s see where ZBA comes out on the use,” Ms Alban said. “The use issue is the question. …Once they make that call on legality of the use, then we can review the site plan.”

“But if ZBA says no towing, that will change the entire configuration of the property,” DeLuca said.

Mr. Brower disagreed. “This is really your choice,” he said, adding that state-of-the-art buses designed to move exotic specialty vehicles might be considered tow trucks.

“That’s not what you have in an automobile service station. You have to come up with what you think is subordinate (use).”

“That having 8 trucks is subordinate (to repair)?” Brower asked.

“If they get approved by ZBA, it comes back to us and we want it attractive, have greater safety and not have cars visible from all around,” Alban said.

“What does success look like? We’re reducing the number of cars, landscaping, getting rid of the terrible rail, no more sign. What is the issue? What are you looking for?” Alban asked Brower.

“Those are just the minimum we need for safety,” he said.

“We don’t understand what is it that your client objects to and what specifically does he want to see?” Mr. Lowe asked Mr. Brower.

“What happened to the 40 cars that were always there and what will happen with 20?” Brower replied.

Brower said his client’s concerns were aesthetics and safety. 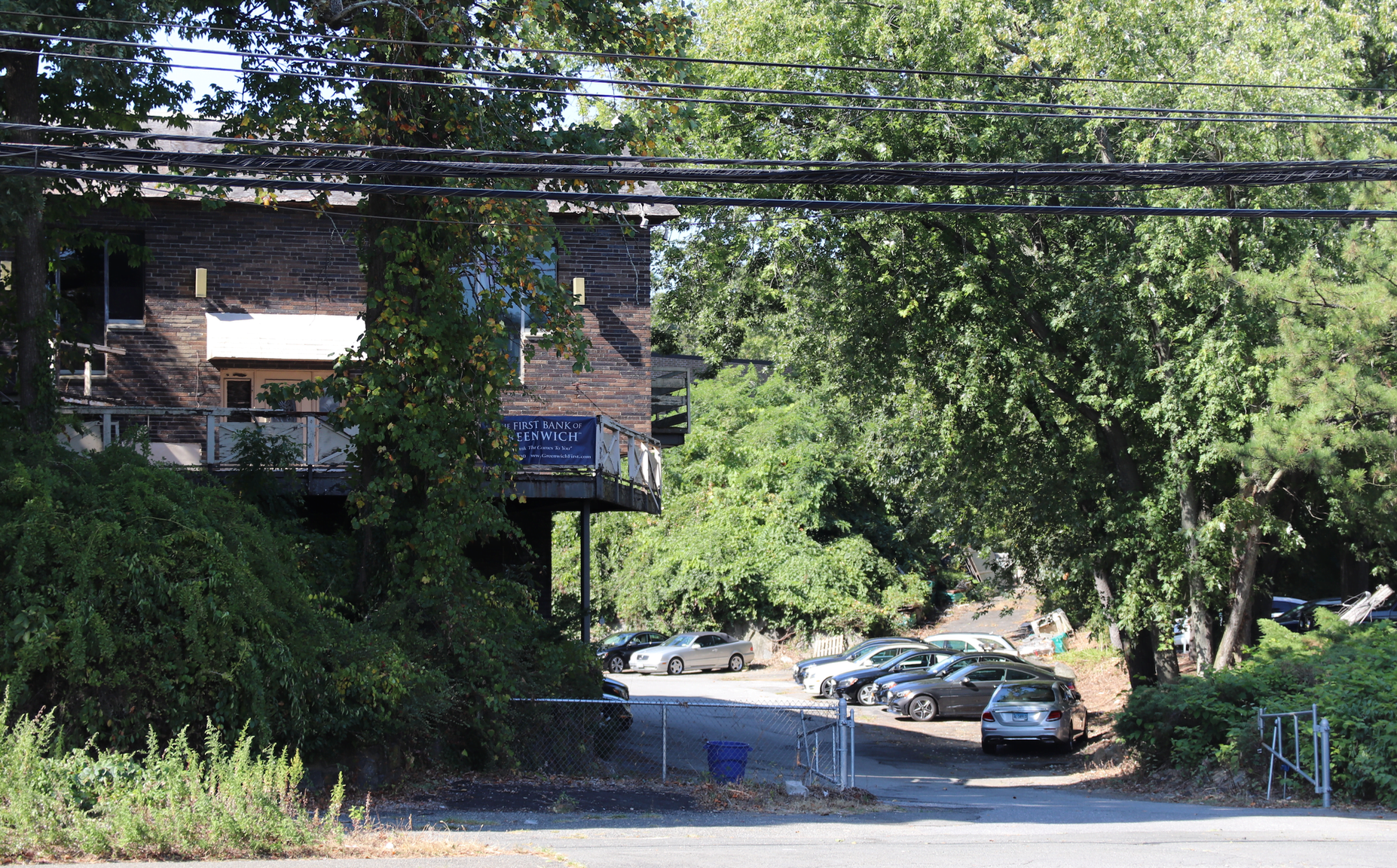 Currently there is parking for Mercedes cars at 581 West Putnam Ave, one of Mr. Ferari’s properties where seeks to redevelop 67 apartments. Sept 18, 2019 Photo: Leslie Yager 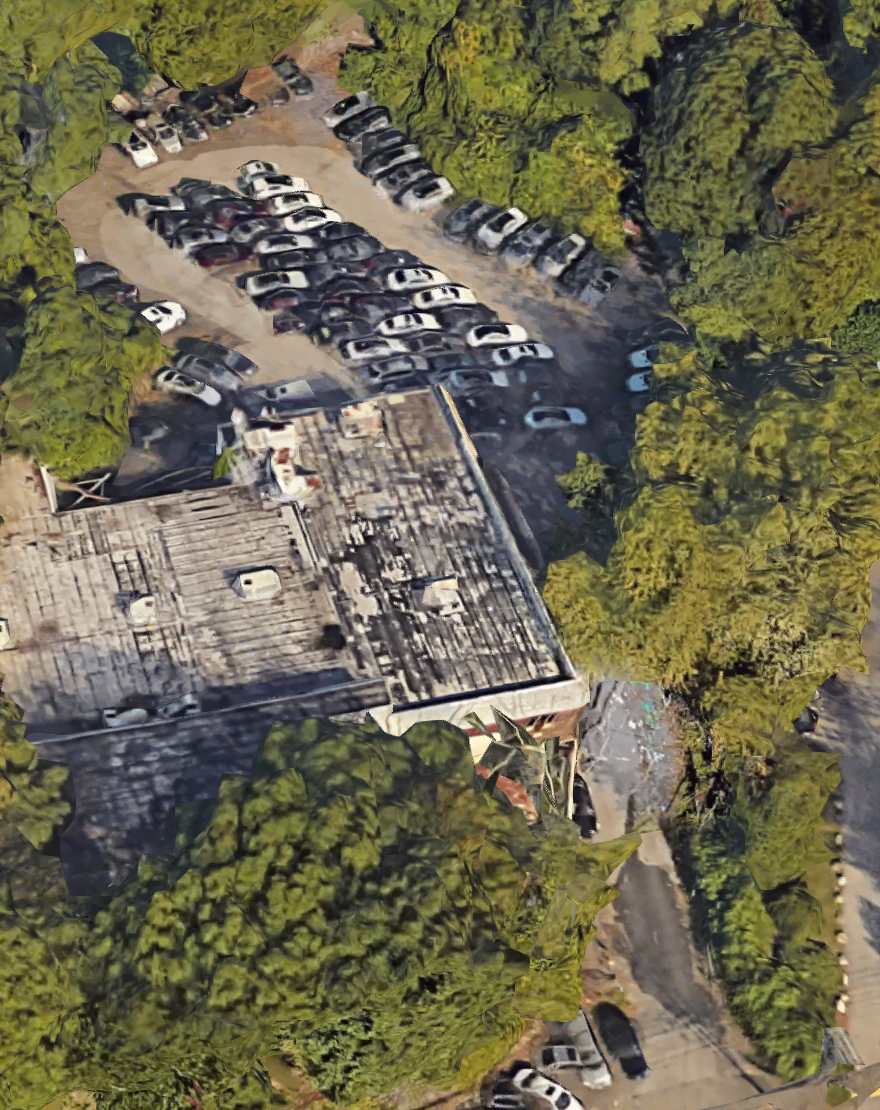 “Perfect. End,” Macri said. “The nuts and bolts need to be sorted by ZBA.”

“If ZBA says no towing, no service then it’s a different ballgame,” Alban said.