The March meeting of the board of Greenwich’s Housing Authority convened on Wednesday in the meeting room at Armstrong Court. The basement room, with windows up high, cement walls painted blue and ceiling lined with pipes, was a grim venue.

After the board members, residents and guests ate sandwiches and cookies and tenants had an opportunity to voice complaints and concerns, Housing Authority executive director Anthony Johnson reported on the environmental testing at Armstrong Court, announcing that the site is clean.

Board member James Boutelle interrupted to say he was confused. “Wait, wait, is that the original test group? Or was that additional testing?” he asked, referring to Planning & Zoning’s March 10th requirement that the Housing Authority hire a company, not Melick-Tully, to dig two holes in the corner of the property near the former dump and incinerator and test for contamination.

Mr. Boutelle said, “It is my understanding that Planning & Zoning conditionally approved the project based on additional testing. So, what is the timing of that?”

“No, that is not a requirement they can require us to do. So we are submitting the tests that we have done already. We’re not doing any additional testing.” Housing Authority Executive Director Anthony Johnson 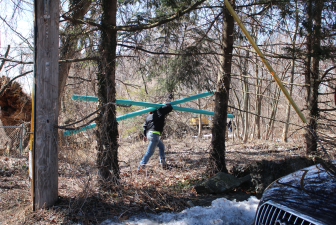 On March 17 Tony D’Andrea, engineer hired by the Housing Authority arrived at Armstrong Court along with Mr. Pecora and employees of Longo to dig holes, which on Wednesday March 25 at the Housing Authority meeting, Mr. Mardula said were not for testing for contamination, but rather “structural tests to determine the perimeter of the property.” Credit: Leslie Yager 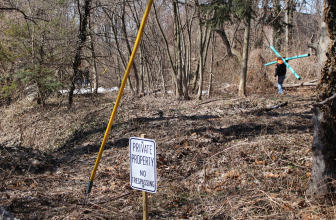 Housing Authority board chair Sam Romeo changed the subject away from the Housing Authority resisting re-tests of soil for contamination according to the Planning & Zoning commission’s requirement.

Moving to the Fuss & O’Neill environmental hazardous materials tests done in April 2014, Mr. Romeo asked Mr. Johnson to confirm that the tests were part of the application process for financing renovations and new construction at the housing project.

“Remediation is part of the costs of the project,” Mr. Johnson said.

The Fuss & O’Neill report revealed elevated levels of lead with Armstrong Court Apartments and in soil tested under the drip line of several buildings.

Mr. Johnson was was not alarmed by the contamination revealed in the Fuss & O’Neill report. “In most cases they found something here, something there. It could be a unit, it could be more, we don’t know,” he said. “This report and further testing will be worked into the financial plan… and remediation will be part of the cost. This is nothing new.”

During the discussion of the Fuss & O’Neill report, Housing Authority attorney Lou Pittocco asked to be recognized from the audience, but Mr. Romeo shook his head. “I am declining to acknowledge you,” Mr. Romeo said.

RTM member Christopher von Keyserling interjected from the audience a joke at the expense of Greenwich Time columnist Bob Horton, who has hammered away at the housing authority for allegedly disregarding the health and safety of residents.

“I wanted to protest,” Mr. von Keyserling shouted. “We’re below level here. And we’re eating food. Isn’t there pollution all over the place that we’re going to endanger our health by eating this food? Aren’t you being derelict in your duty as a board to feed us polluted food?”

“There’s one special sandwich over in the corner,” Mr. Mardula said. 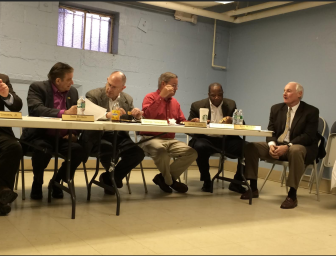 Sam Romeo, George Yankowich, James Boutelle, Anthony Johnson and Terry Mardula at the March meeting of the board of the Housing Authority of the Town of Greenwich at Armstrong Court.

Reached by phone on Thursday morning, Dawn Fortunato, who attended Wednesday’s Housing Authority (HATG) meeting, had plenty to say. Fortunato, who lives in a house near Armstrong Court that was remediated for lead after her son was diagnosed with lead poisoning, characterized the comments of Mr. Johnson as hypocrisy.

“I had the State of Connecticut and the Town Health Department full court press on me when lead at the same level was found in my home,” Fortunato said. “It’s not just ‘some minor remediation.’ It’s a big deal and can cause irreversible damage. It seemed like they were more concerned by the risk of investors than the health risks of residents. These board members think they are above the law and can do whatever they feel. They haven’t even made their tenants aware that they are living in these current conditions as they are required to do by the EPA. Laws are in place for a reason. We don’t get to pick and choose which ones to follow.”

Reached by phone on Thursday morning, Mr. Johnson explained why the Housing Authority would not be hiring an outside company to test the soil as P&Z requested.

“It is not required under the regulations,” Mr. Johnson said. Asked to be more specific, Mr. Johnson referred to First Selectman Peter Tesei’s statements on his March 13 radio show that he thought the P&Z commission exceeded their responsibility when they requested HATG re-test the soil for contamination.

Mr. Johnson added that engineer Tony D’Andrea was in charge of the “structural testing” at the site, in roughly the same area the P&Z wanted testing for contamination, but he was looking with his own eyes to see if there were changes in soil color or texture or using his sense of smell to determine whether it smelled funny. “He was looking to see visually or smell a difference in the soil,” he said.

Asked why residents in apartments identified by the Fuss & O’Neill report as having lead paint were not notified of the elevated levels, Mr. Johnson said that was not required by law. He said the Housing Authority’s approach is to “encapsulate until we remediate.”

“As long as it’s encapsulated, and not damaged and can’t be ingested by a child, especially a child under six, it’s fine,” he said.

Fuss & O’Neill found lead paint in two out of ten apartments they checked. They also found lead in soil after taking four discrete samples from the corners of each of the buildings collected at the building drip-lines, two ft from the foundation. The Ct Dept of Health standard for bare residential soil in play areas and non-play areas is 400 mg/kg. Building 1-5 had a level of 440 mg/kg.