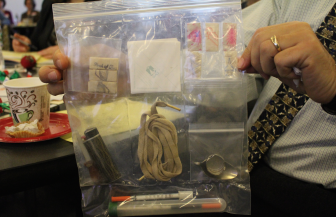 Heroin paraphernalia on exhibit at a recent meeting of Communities for Action in Stamford. Credit: Leslie Yager

The recent arrest of Michael Forgione-Dattilo (March 19), 25, of 860 North Street in Greenwich, for conspiring to sell narcotics is the second arrest stemming from a near fatal heroin overdose of a Greenwich resident, a juvenile male.

According to Lt. Kraig Gray of Greenwich Police, there was an incident at 428 West Putnam Ave, Wendy’s restaurant, on December 26, 2014. Lt. Gray said there had been a medical call that turned out to be a possible overdose.

“The investigation led us to the dealer,” Lt. Gray said, referring to Forgione-Dattilo.

“This gentleman was part of the investigation that revealed two people had been involved in the sale of narcotics,” Lt. Gray said. “Those two conspired to sell drugs.”

Forgione-Dattilo was one of the pair. The other was Luis Migel Santiago-Romero, 25, of Port Chester who was arrested on January 23 for illegal distribution of prescription medicine. He is charged with felony Possession of Narcotics and felony Sale of Certain Illegal Drugs. His court date in Stamford Superior Court is April 7 at 10:00am. His bond on this case was set at $100,000, but he was not released from custody.

Forgione-Dattilo has a court date of March 30 in Stamford Superior Court. He was able to post a $100,000 Surety bond and released from custody.