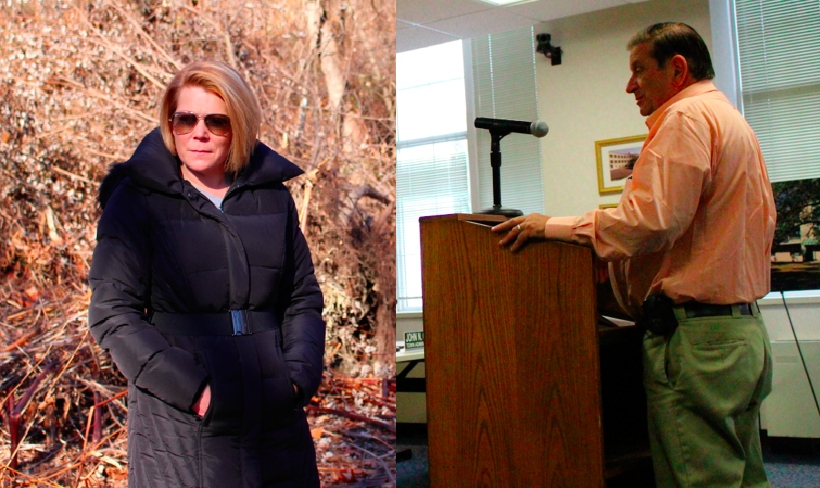 On Thursday Dec. 19, Housing Authority’s chairman, Sam Romeo, was hosting his regular 6:00pm-8:00pm WGCH radio show, Greenwich Matters, when a caller identified as Shirley disputed the claim on the Housing Authority website that soil at Armstrong Court is “clean of toxins.”

The site offers a link to the soil testing report. 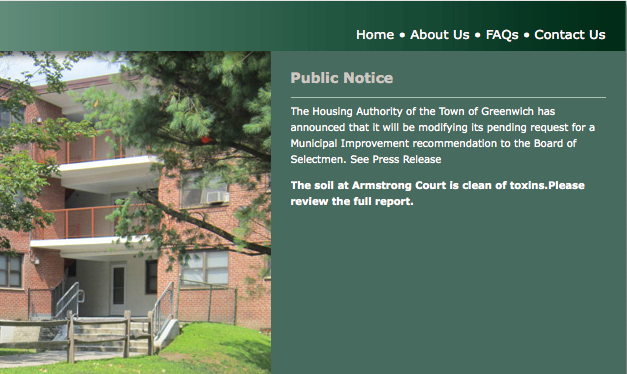 “Don’t you feel guilty about your son winding up with lead poisoning? Shouldn’t you? Where did he get it from? He got it from your yard. Is it my fault that you’re living there? Armstrong court didn’t cause that. We’re taking care of our residents. Booth Court should take care of its residents. Thank you very much for the call.

– Sam Romeo, Greenwich Housing Autority to WGCH caller “Shirley” who revealed herself to be Dawn Fortunato of Booth Court

FORTUNATO: My name is not Shirley. It’s Dawn Fortunato. I’m one of the ‘misguided residents.’ I heard you had some not-so-nice things to say last week on the radio.

ROMEO: What were they? Obviously you didn’t hear because, all I did was read Mr. Horton’s letter and my own letter. Whatever those letters* were, that’s what I said.

(*Sam Romeo’s Dec. 11 letter to the editor published in Greenwich Time, stated in part, “I do not understand why Mr. Horton wrote his column implying Armstrong Court is a hazardous site and that the Housing Authority is aware of the problem and seeks to hide it from the public.”

A Dec. 13 Greenwich Time column by Bob Horton reads in part, “The Housing Authority has known of serious contaminants there since at least 2012, when soil tests taken at a playground on the property revealed higher than acceptable levels of cadmium, chromium and various other –iums.”)

FORTUNATO: Okay, well I have a few questions I’d like to ask you. Can you tell me where the chain of custody form is?

ROMEO: Custody of what?

FORTUNATO: Custody of what! The soil samples.

ROMEO: With the engineers.

FORTUNATO: Correct. Where is that form? It’s supposed to be published on your website.

FORTUNATO:  No, it certainly is not. You have obviously not seen that report if that’s what you think.

ROMEO: As I understand it, you had made a statement at Planning and Zoning that there are 10 cases of cancer on Booth Court and Booth Place.

FORTUNATO: There are five on one street and five on the other. Some people have cancer and they are in remission.

FORTUNATO: I’m not saying it came from Armstrong Court. The area is polluted.

ROMEO: You’re implying that it came from Armstrong Court.

FORTUNATO: No, I’m not. The area is polluted.

ROMEO: You’re implying that though. Did you test the property?

FORTUNATO: Yes, I did because my son has lead poisoning.

ROMEO: So the property’s clean then?

FORTUNATO: My yard came up at 300 and you’re well aware that Armstrong Court, where those children play, tested at 420, and 400 is the limit in a residential area, so , 420, something should have been done in 2011.

FORTUNATO: Well, when you open the window, okay, and you live in the area for a long time, which a lot of the people who have lived in there for a long time. Armstrong Court has been my neighbor for 63 years. And you’re breathing in this soil and you have people that are touching it and eating from it.

ROMEO: They’re not breathing in the soil. Are you putting your nose to the ground, Dawn? Come on. Are you eating the dirt?

FORTUNATO: Oh they’re not breathing it in when they open up the window?

ROMEO: They’re not breathing in the soil.

FORTUNATO: Don’t try to be a funny guy.

ROMEO: I’m not trying to be funny. I’m trying to make a point here. You’re making accusations without any facts.

FORTUNATO: I’m not just saying it’s coming from that area. The area is polluted.

ROMEO: Yes you are.

ROMEO: It backs to the dump. Where you back to. Same thing as you. The dump.

FORTUNATO: No, I was down there. You went down 3 feet. I could stick my foot in the hole and it went up to my knee.

ROMEO: Do you want to hire somebody to come do the testing?

FORTUNATO: The testing is going to be done.

ROMEO: We already did our testing. It’s been submitted.

FORTUNATO:  No. No. Not flim-flam testing.

FORTUNATO: Those soil test have more holes than Swiss cheese.

ROMEO: Now you’re calling us liars and we’re being deceptive.

FORTUNATO: If that shoe fits then wear it. I’m going to prove it.

ROMEO: Be our guest because you’re making a lot of unfounded accusations…

ROMEO: There you go again.

FORTUNATO: Mold in there. Old pipes. You guys aren’t even above board. The people living in Armstrong Court are living in unsanitary living conditions.

FORTUNATO: There’s not mold in the building?

ROMEO: No, there’s not. If there was we’d be in big trouble. We’ve done a lot of extensive renovations.

FORTUNATO: There’s no flooding?  There’s not lead? There’s not a problem with the water heaters? And there’s not ponding on the roof either, right? Answer me. Answer me. There’s a document that the state of CT went in there…

ROMEO: You want to send it to us. You don’t know what you’re talking about. You have all this time on your hands.

FORTUNATO: You’re right I do have a lot of time on my hands.  I deal with a little boy with lead poisoning for over a year.

FORTUNATO: I know how he did. He was putting rocks in his mouth.

FORTUNATO: Guilty? Guilty that we’re living in a contaminated area?

ROMEO: We’re taking care of our residents. Booth Court should take care of its residents. Thank you very much for the call.

FORTUNATO: Are you? Are you taking care of those residents? I don’t believe that to be so. You do realize there are people in there with asthma and respiratory issues?

FORTUNATO: What did you say on the radio about the neighbors last week? That we were misinformed?

FORTUNATO: I am speaking from fact.

ROMEO: You have facts that your yard is polluted because your son wound up with lead poisoning.

ROMEO: No, no no. We did not receive information from Mr. Finebecker.

FORTUNATO: Pinnoccio. I think your nose is growing.

FORTUNATO:  I don’t need to make up lies.

ROMEO: If you would like to send the facts to us, we’ll be more than glad to review them. If you have documentation. Put the homework… Send the documentation. Send your facts…

FORTUNATO: No, I’ve done my homework.

ROMEO: If you want to stop the project, send the facts to the proper authorities.

ROMEO: They’re going to have a better quality of life when we’re done with the renovations. And no thanks to you.

FORTUNATO: You need to be more open with the public.

ROMEO: We’re more than open with the public.

FORTUNATO: I don’t think that you are.

ROMEO: I gave you ample time to make your case tonight. If you have the facts… Accusations are not facts.

ROMEO: Now you’ve called me a liar and you’ve slandered me. Thank you for the call and goodbye. (Laughs) I’ve given you ample time to make your case. Enough is enough.

FORTUNATO: Stop lying to people. Everyone deserves to live in a clean healthy environment.

ROMEO: Thank you for the call. I think you went too far so I’m going to day goodbye. (Laughs).