Founded in December 1918, Troop 9 is the oldest continuously chartered troop in Greenwich and is sponsored by the Second Congregational Church. In fact, Troop 9 started just eight years after Greenwich Council was established in July 1912. 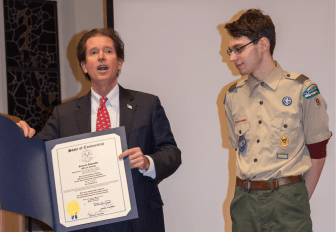 Also in attendance were several executive members from Greenwich Scouting including Craig Harding, Kevin O’Shea, and Wayne Plewniak, as well as former and current adult leaders and scouts. 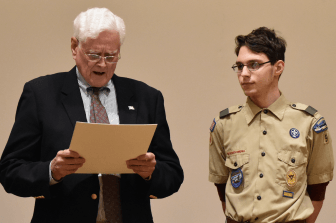 Also, a special commemorative patch was made for the occasion featuring the 2nd Congregational Church.

Also, a special commemorative patch was made for the occasion featuring the 2nd Congregational Church.

Whit proudly described and how he saved $300 to contribute towards a band saw for his enterprising woodworking business making cutting boards.

When asked what aspect of scouting he liked best, he replied, “So far, I like the camp outs.”

On July 12, 1912, the BSA Greenwich Council was founded and granted its first charter from National BSA (founded in US in 1908).

In 2012, the Greenwich Council celebrated its 100th year anniversary after Ernest Thompson Seton founded the League of the Woodcraft Indians in Cos Cob, which became the Boy Scouts of America in February 1910. 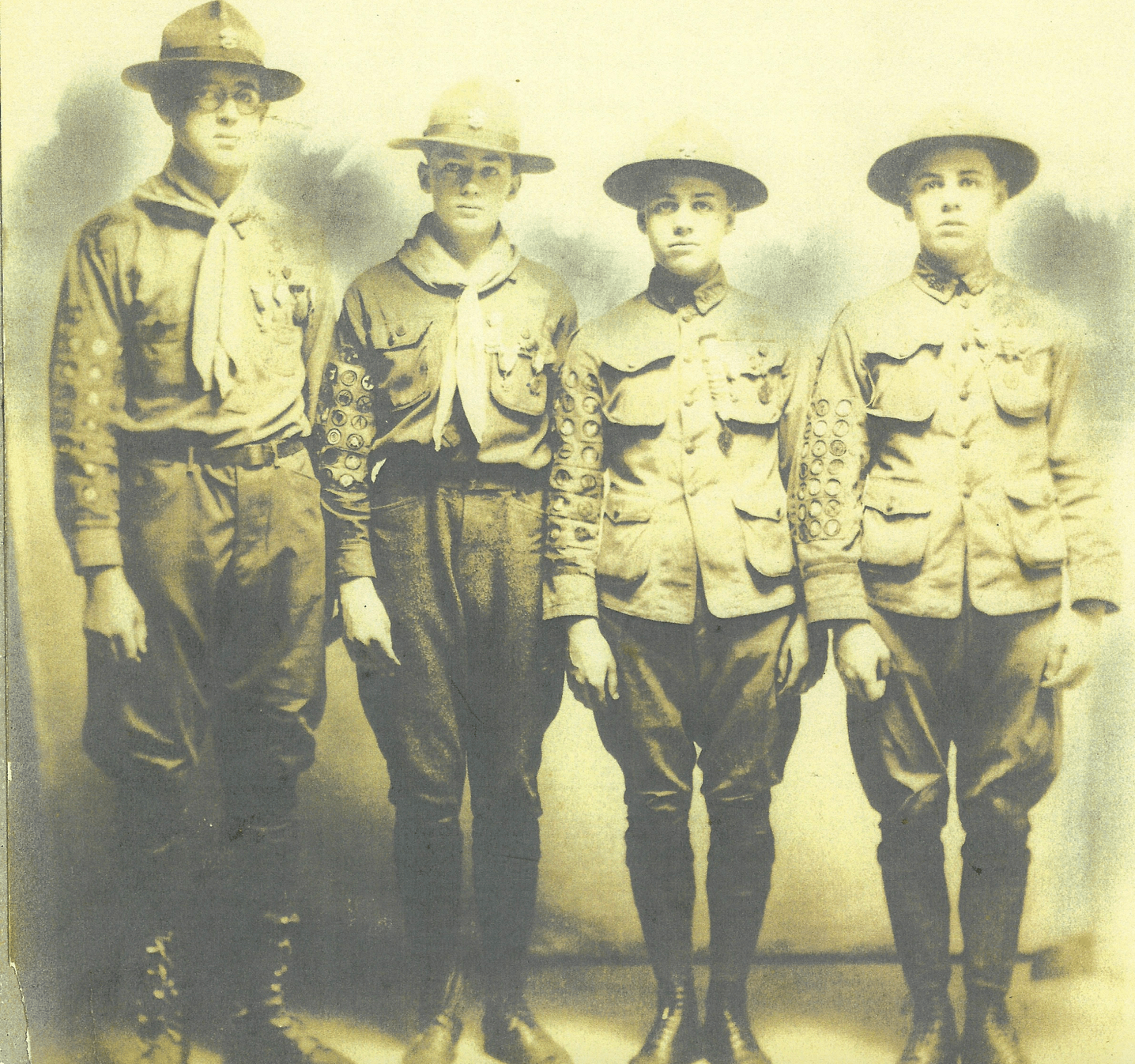 At the time, Woodrow Wilson was the 28th President of the United States from 1913 to 1921, and the country was in the middle of World War I.

The original troop’s Scoutmaster was Franklin G. Chapin from 1918-1930, and its membership was believed to consist only of members of the Second Congregational Church.

For a long time now, Troop 9 (across BSA) has included members of many Greenwich faiths, and from all areas of town, but mostly scouts from the Central to Cos Cob areas of town (6th-12th grades).

A continuously chartered troop also means that Troop 9 has provided a continuous chain of service to their community and country. 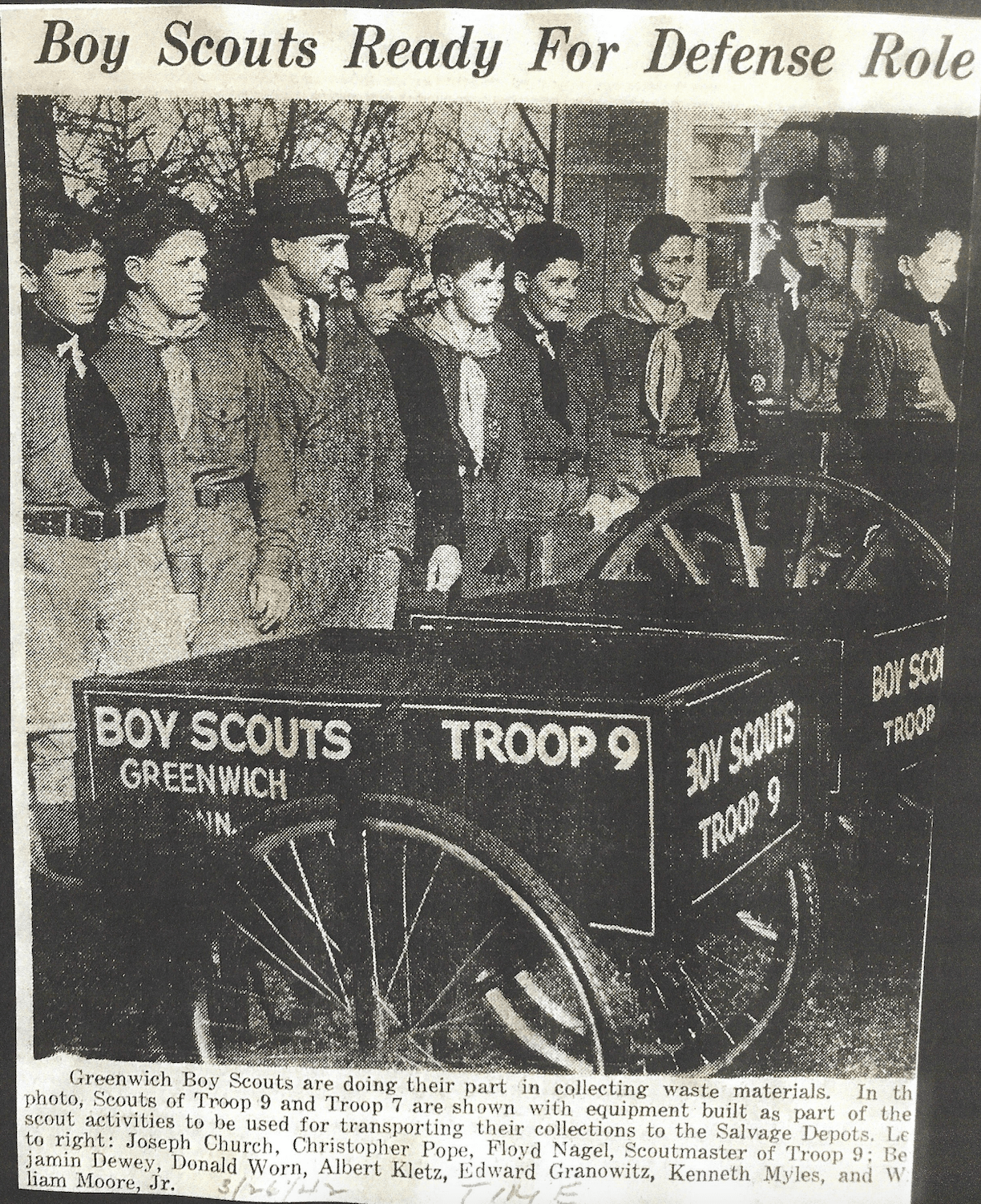 Another photo from the archives is a photo of Troop 9 scouts standing with their wood-constructed wagons with the headline, “Boy Scouts Ready for Defense Role.”

Another photo from the archives is a photo of Troop 9 scouts standing with their wood-constructed wagons with the headline, “Boy Scouts Ready for Defense Role.”

It was not uncommon during war times for the boy scouts to assist as a show of their effort to collect scrap materials for salvage.

Recently a Town-wide call to service busied troops from the Greenwich Council as they assisted with preparations for 2012’s Hurricane Sandy.

“Troop members have offered food and clothing donations, countless hours of volunteer service, and a deep and reliable commitment to serving the community,” Coughlin added.

Unique to Troop 9 are the following community service partnerships:

“A painful lesson that was learned is that one should not cut jalapeno peppers and then rub one’s eyes without first using a lot of soap and water on the hands!” recalled Scout Liam Brinton.

This annual service was initiated by a Troop 9 scout, Robbie Tolette in 2006 and continues – even for this year’s rainy event.

“Back around 2006, I was approached by a local business owner who was looking for help and knew I was a Boy Scout,” said Troop 9 Eagle, Robbie Tolette. “First Light was a great event that Troop 9 would look forward to, and we always had great turnouts with scouts offering to help. At times, we had well over 20 scouts coming to help with the event.”

Robbie said Troop 9’s involvement with First Light continues today, and that long after he left the Boy Scouts remains one of his favorite memories from his time in scouting.

Local Veterans of Foreign Wars (VFW for the annual handing out of the poppies at the Greenwich Town Party. 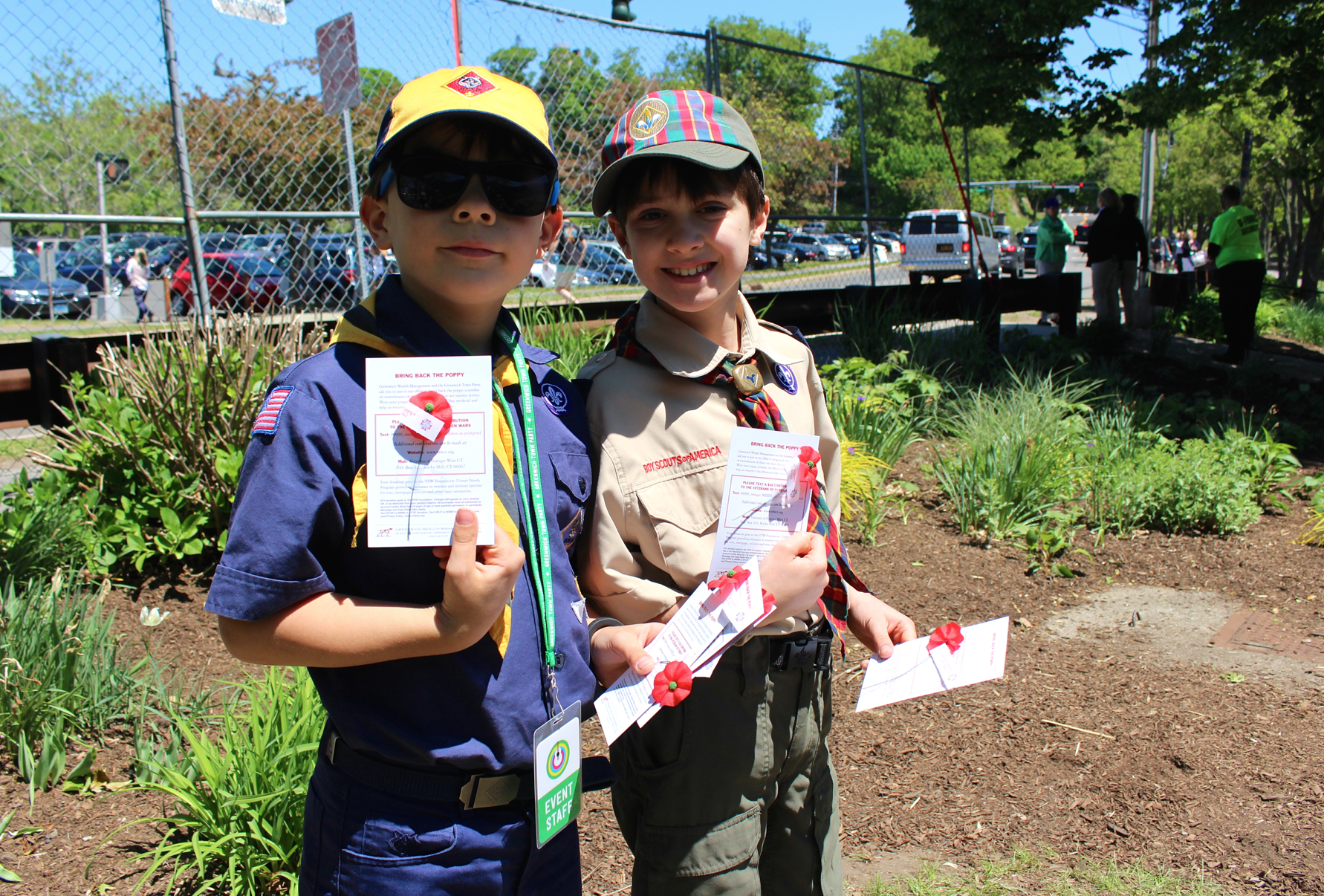 Troop 9 Eagle candidates have partnered with many community organizations.

In 2003, a Troop 9 Eagle Scout was responsible for erecting Greenwich’s first 911 Memorial (before its current location); and other projects include: the Mill Pond Chess Park on Strickland Road, adjacent to the Cos Cob Starbucks; concerts at senior citizens’ homes, a new outdoor staircase at Grass Island, the marking of storm drains “Drains to the Sound,” and most recently a new pollinator garden at the Nathaniel Witherell Senior Center.

While there is emphasis on climbing the ranks to Eagle, not all Scouts follow that track.

In addition to the Council-wide events, camp outs, and winter Klondike, Troop 9 participates in annual weekend campouts and ski trips to Vermont, campouts at Great Captains Island, Backyard Patrol Camps, the trip to Philmont Scout Ranch in New Mexico, and the annual pot luck holiday party where the Scouts are in charge of cooking. 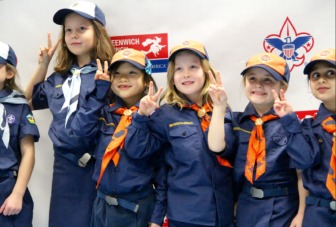 While much has changed over the scouting years – notably the recent  inclusion of girls – much remains the same including building leadership skills and confidence, and giving back to the community.

Adventure, leadership, service and learning, especially in the outdoors, have remained essential to the Greenwich Scouting experience since its inception in 1912.

Nearly 1,750 local youth participate in fun programs, such as the Fishing Derby, run by 250 dedicated volunteers, all of which help prepare local boys and girls for life. With over 20 partnering organizations and Cub Scouting, Boy Scouting, Venturing and Exploring opportunities in Greenwich, Connecticut, there’s never been a better time to join the Scouting community.