Let that sink in.

Mr. Mata, who taught PE from 1976 to 1978 at the now shuttered Byram School before coming to New Lebanon, recalled how 42 years ago New Leb’s tiny enrollment matched its tiny size.

In Mata’s first year at New Leb, he said there was a 4th and 5th grade combo class taught half by a teacher and half by the principal.

Since enrollment was not high enough to justify a full time PE teacher, Mata’s time was divided between New Leb and for a time Hamilton Avenue School, and for a time Western Middle School.

Much has changed since Mata began teaching. While once the enrollment matched the soon to be demolished school’s tiny size, over the years the number of students has skyrocketed.

On Wednesday, during a rally in the gymnasium to celebrate district norms, the nearly completed new New Lebanon School was visible from the gym windows. 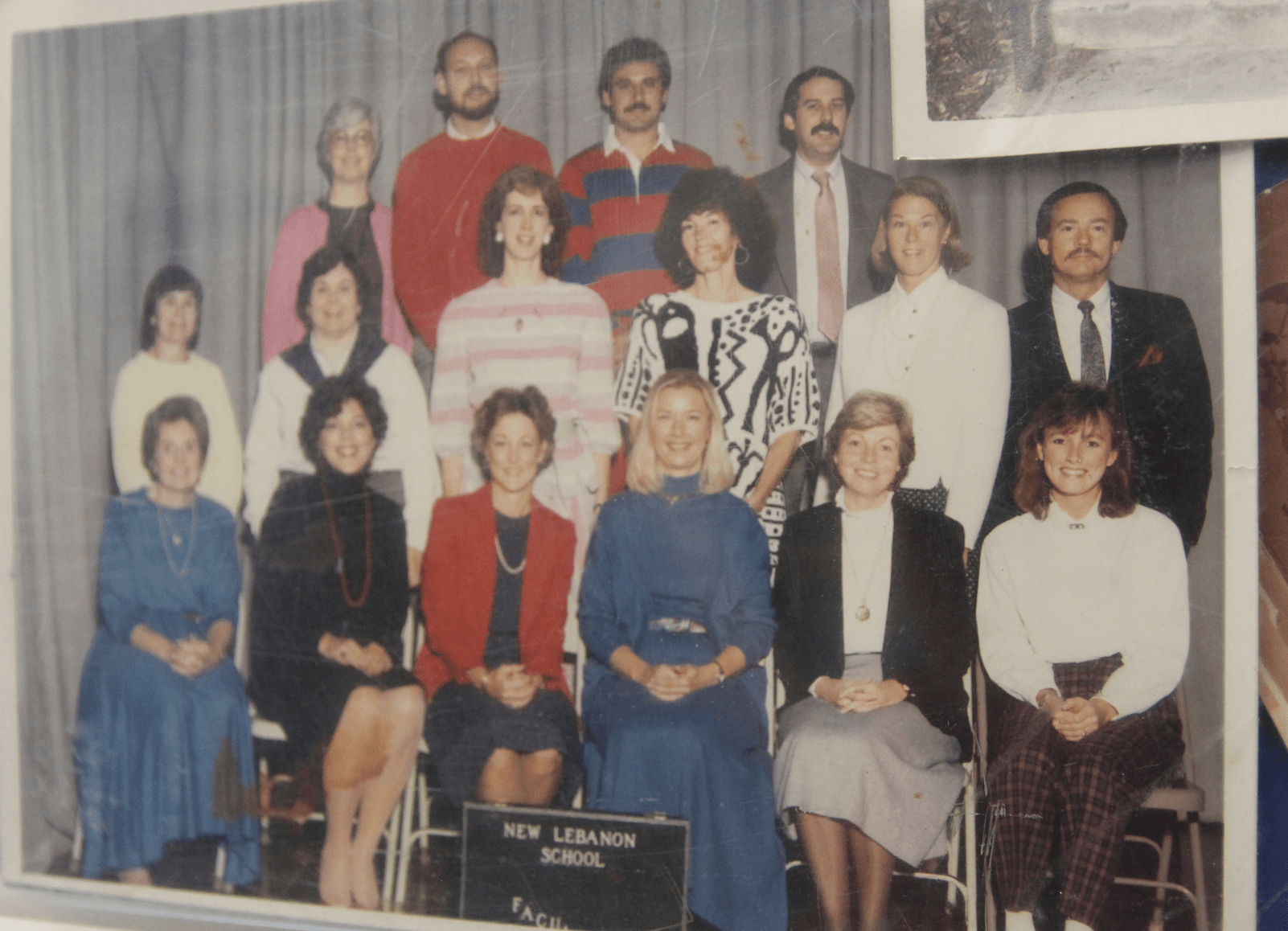 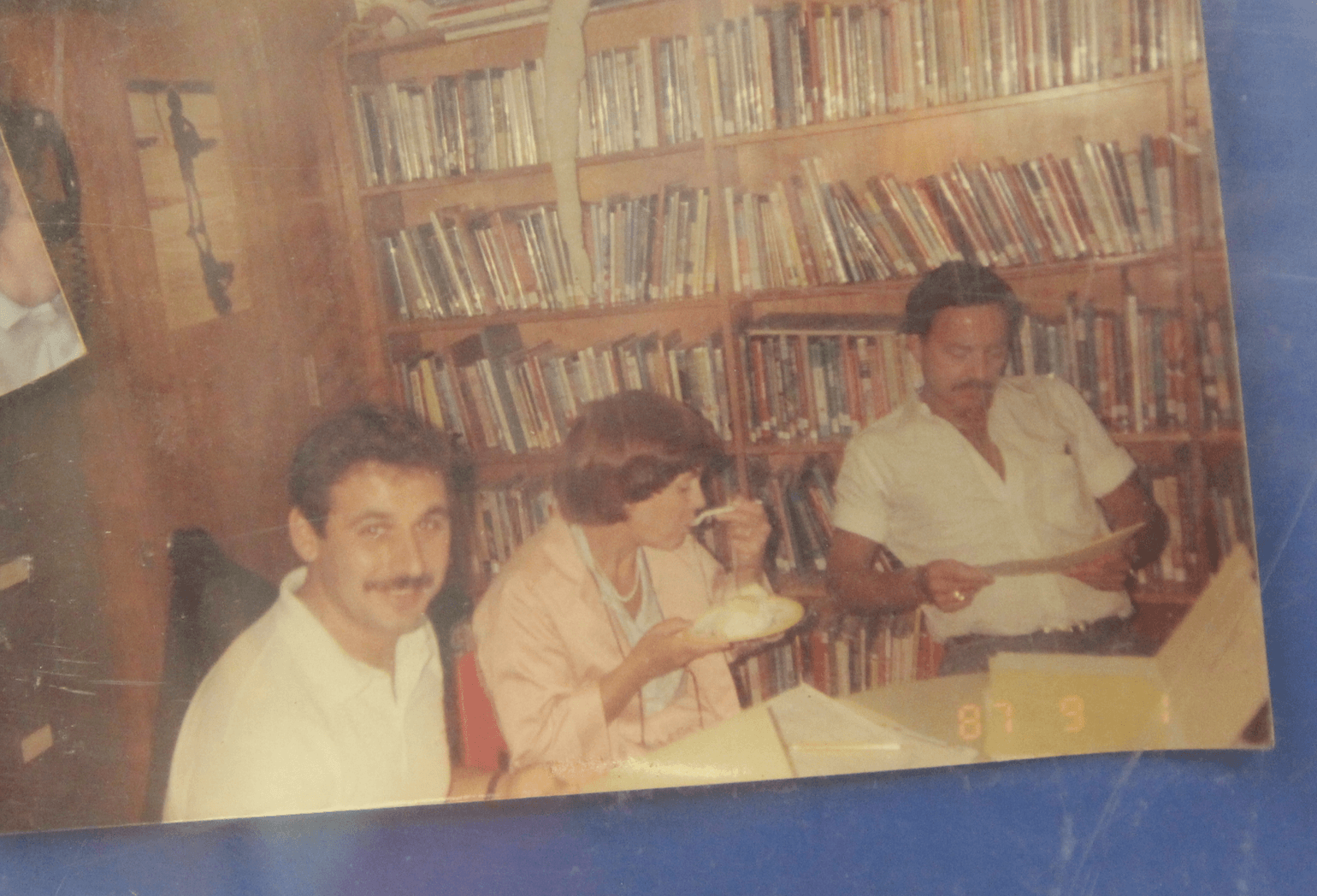 After the norms event, Principal Barbara Riccio said Mr. Mata could pick a cheer for the entire student body. “We Will Rock You!” he replied without hesitation, and the kids stamped their feet and clapped the refrain.

Lastly, State Rep Mike Bocchino, who is both a New Lebanon alumni and a current parent, surprised everyone with a proclamation from the Connecticut General Assembly in honor of Mata’s recently announced plans to retire at the end of the school  year.

The proclamation, which cited Mata’s unparalleled dedication to the children, the school and the community, read in part:

The countless hours you have also provided for before and after programs, gymnastics,  ice skating and the culmination of each school year with field day, is truly exceptional and greatly appreciated.

Thank you for your kindness, your humor and enthusiasm, all of which have earned you the respect of students, teachers and parents.  You truly are Mr. New Lebanon.

“We have great kids here,” Mata said afterward, as the kids filed out of the gymnasium.

“It’s special, the kids are special,” he said as he gazed across the gym knowing Wednesday’s assembly would be one of the last in the soon-to-be-demolished school.

He said when he first arrived at New Leb, the gym had a tile floor, there was no padding on the walls, and the ceiling had a giant glass skylight with sliding curtains underneath it.

Mata who lives in Trumbull, said the commute had worn him down. In retirement he said he looks forward to traveling and enjoying time with his new grand daughter.

Mike Bocchino who had Mr. Mata as his PE teacher, recalls that Mr. Mata used to live across the street on Mead Ave. “We used to get to school in the morning and yell to him, “We’re here. We’re ready!”

Principal Barbara Riccio said Mr. Mata goes above and beyond his responsibilities.

“He comes in early before school even though he doesn’t have to,” she said. “He comes in and sets up games in the gym for the kids.”

In fact, Bocchino said he remembered wanting to get to school early because Mr. Mata would set up floor hockey in the gym.

Later, at Greenwich High School, Bocchino said he had his PE teacher again because Mata was a football coach there for many years.

“Mr. Mata has always gone the extra mile,” Bocchino said. “He takes the students over to Dorothy Hamill Rink starting in kindergarten so they can learn to skate.”

“A lot of families live near the rink but don’t know about it,” Bocchino said, adding that the PTA supports the skating program. “They might not get to learn to skate otherwise.”

“Starting in kindergarten they’re all falling,” Bocchino said. “But by fifth grade they all know how to skate.”

As for Mr. Mata, Bocchino said, “The kids love him. He’s an institution here.” 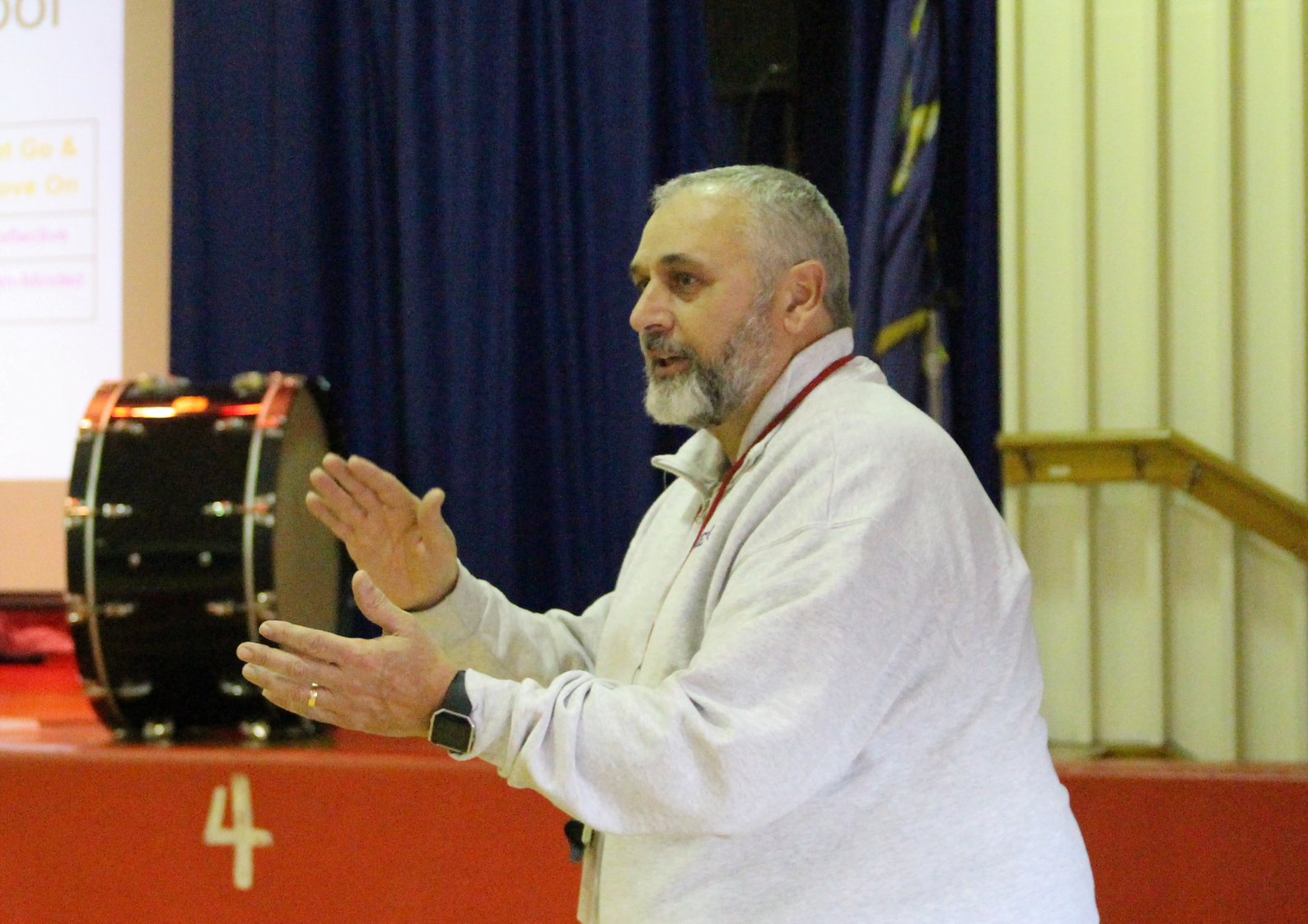 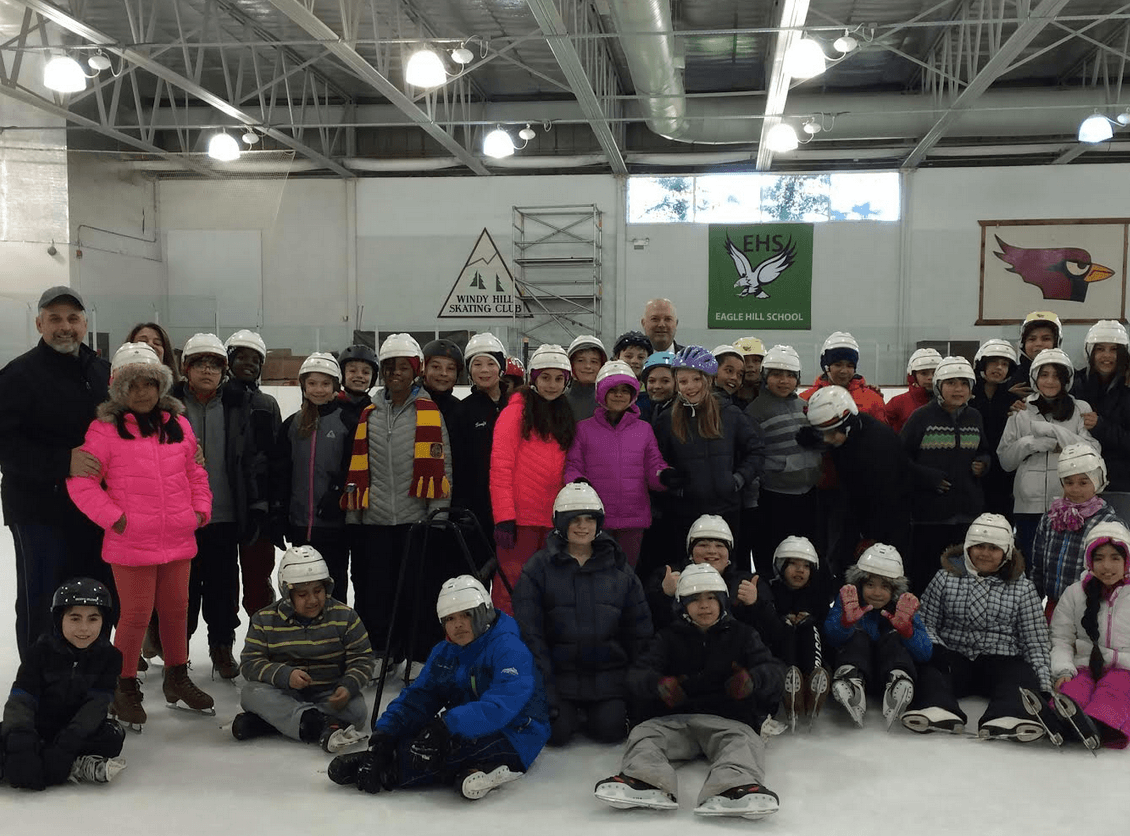 PE Teacher Bob Mata (far left) with New Lebanon School students at Hamill Rink where they learn to skate as part of the PE program. State Rep Mike Bocchino who is both New Leb parent and a graduate (back row). Contributed photo 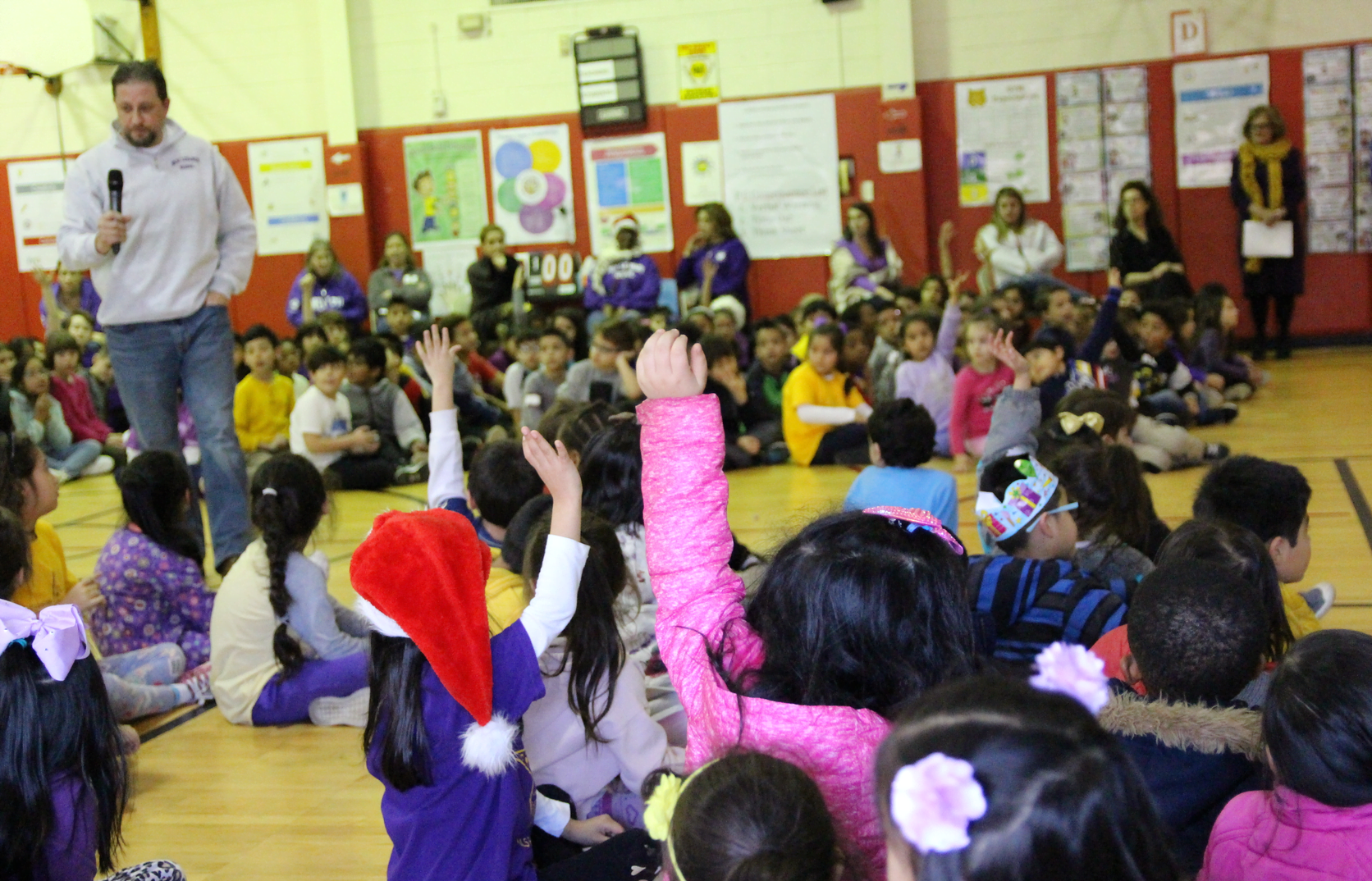 On Wednesday students recited the “nifty norm following pledge” and learned about being influencers in the community. Dec 19, 2018 Photo: Leslie Yager