On Friday at Old Greenwich School volunteers and students got busy with an Earth Day project that involved transforming unwanted t-shirts into reusable, washable shopping bags in anticipation of the enactment of the Town’s plastic bag ban which goes into effect on September 12, 2018.

Volunteers included members of BYOGreenwich who pushed for and succeeded in introducing the Reusable Checkout Bag Ordinance, a.k.a. “the plastic bag ban,” which was approved in a vote by the RTM last month. Also among the volunteers were Sarah Nahabedian, Nancy Dickinson and Aleksandra Moch from the Town’s Conservation Commission, who will be tasked with enforcing the ban next fall.

Throughout recess, under sunny skies, children had fun making the reusable bags. 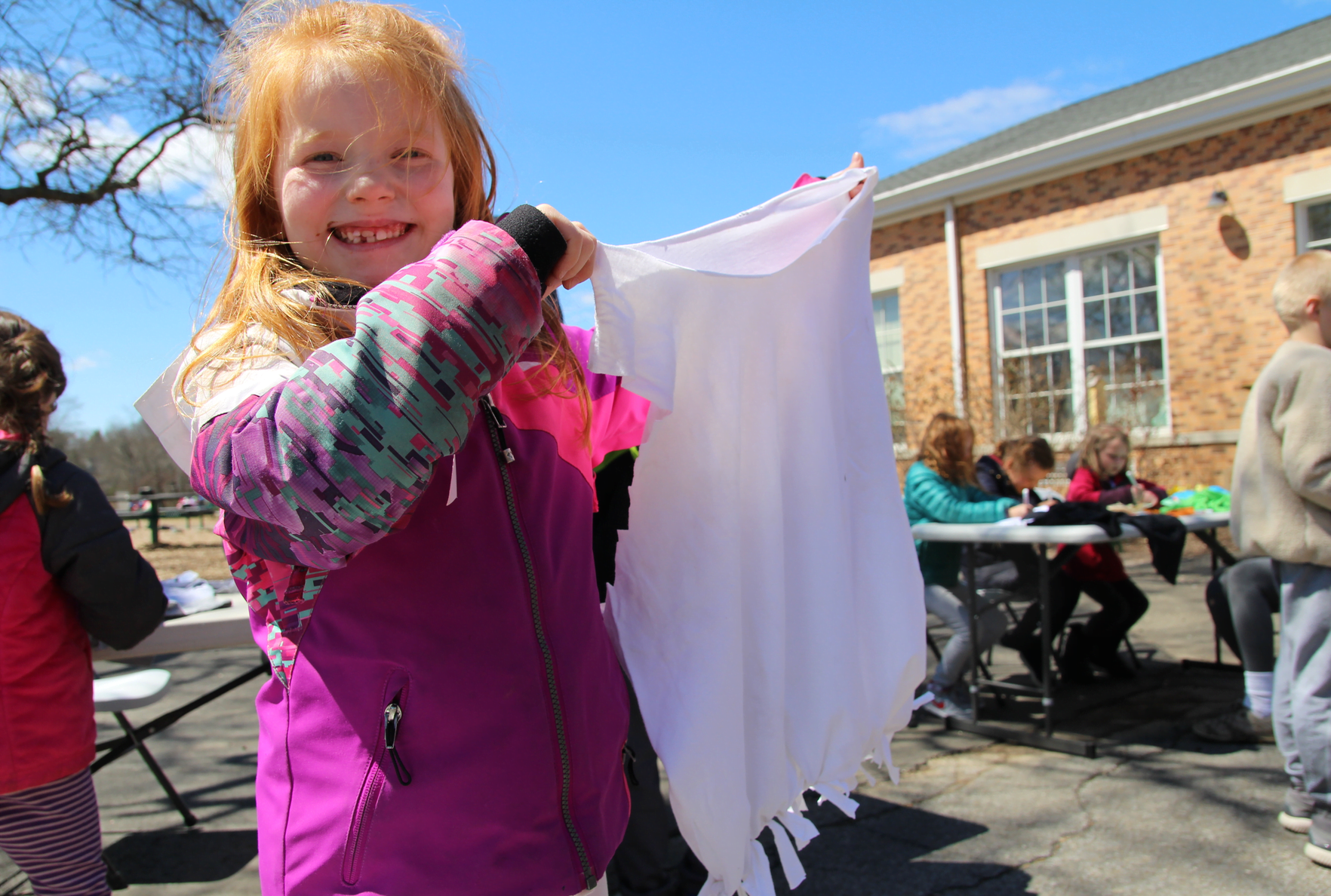 Madeline shows off the bag she made from a t-shirt at Old Greenwich School. Photo: Leslie Yager 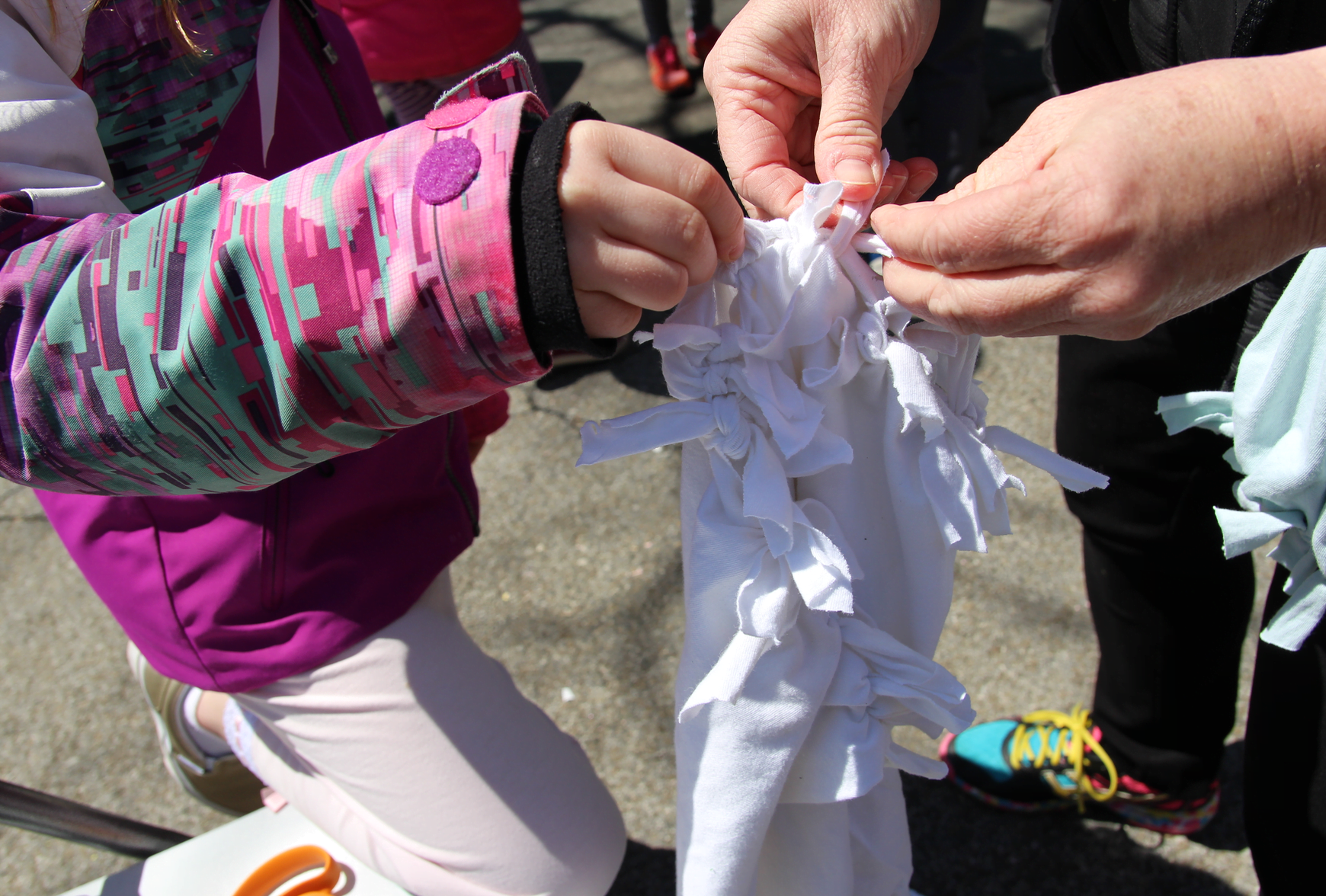 “What we’re doing is to tie a knot twice on the bottom because if we put a lot of groceries in, we don’t want it to fall apart,” said volunteer Kim Gregory as she helped Madeline with knot-tying. “Tying knots is an art form,” she added.

The event was the brainchild of Aleksandra Moch from Greenwich’s Conservation Commission.

Moch said she was looking for educational topics for Earth Day and was inspired by the BYOGreenwich volunteers. “It’s educational for the children and their parents because hopefully they’ll bring these home and start conversations,” she said. “It’s upcycling. It’s instead buying new bags.”

“From my perspective, as a mother, the idea that they can learn how to recycle and reuse, rather than take a Poland Spring bottle every day is valuable,” Kutai said. “One small change can make a tremendous difference in our environment.”

Ms. Kutai, who has three girls at the school, including twins, said,” We want to become a zero-waste school,” adding that another goal is to do away with styrofoam trays in the cafeteria. “Cos Cob School is piloting a program to replace styrofoam trays with biodegradable paper ones.”

Kutai said her hope is that the children will go home and talk to their parents. “Maybe they’ll say, ‘I made a bag out of a t0shirt. What else can we do to help save our environment?'”

Jeanine Getz from BYOGreenwich said stores including Stop & Shop and CVS are already accustom to providing customers with alternatives to plastic bags in places where plastic bags have already been banned. In Massachusetts, 67 towns including Boston already have plastic bag bans.

“It’s pretty cool to see the students doing this,” said Sarah Nahabedian of the Town’s conservation commission. “We’ve been asking them if they know about the plastic bag ban. Some do and some don’t. Without encouraging them, they’re saying they’ll use the one they make today. They know reusable bags should be used.”

In fact, Nahabedian said many of the Old Greenwich families are already using reusable bags. “They’re already doing it, but this reinforces the behavior and goes toward changing the culture a little at a time. You have to start them young.”

During the bag-making exercise, t-shirts had their sleeves, collars and bottom hems cut off. Without prompting the children thought of new uses for the fabric scraps, including visors, headbands and hair scrunchies. 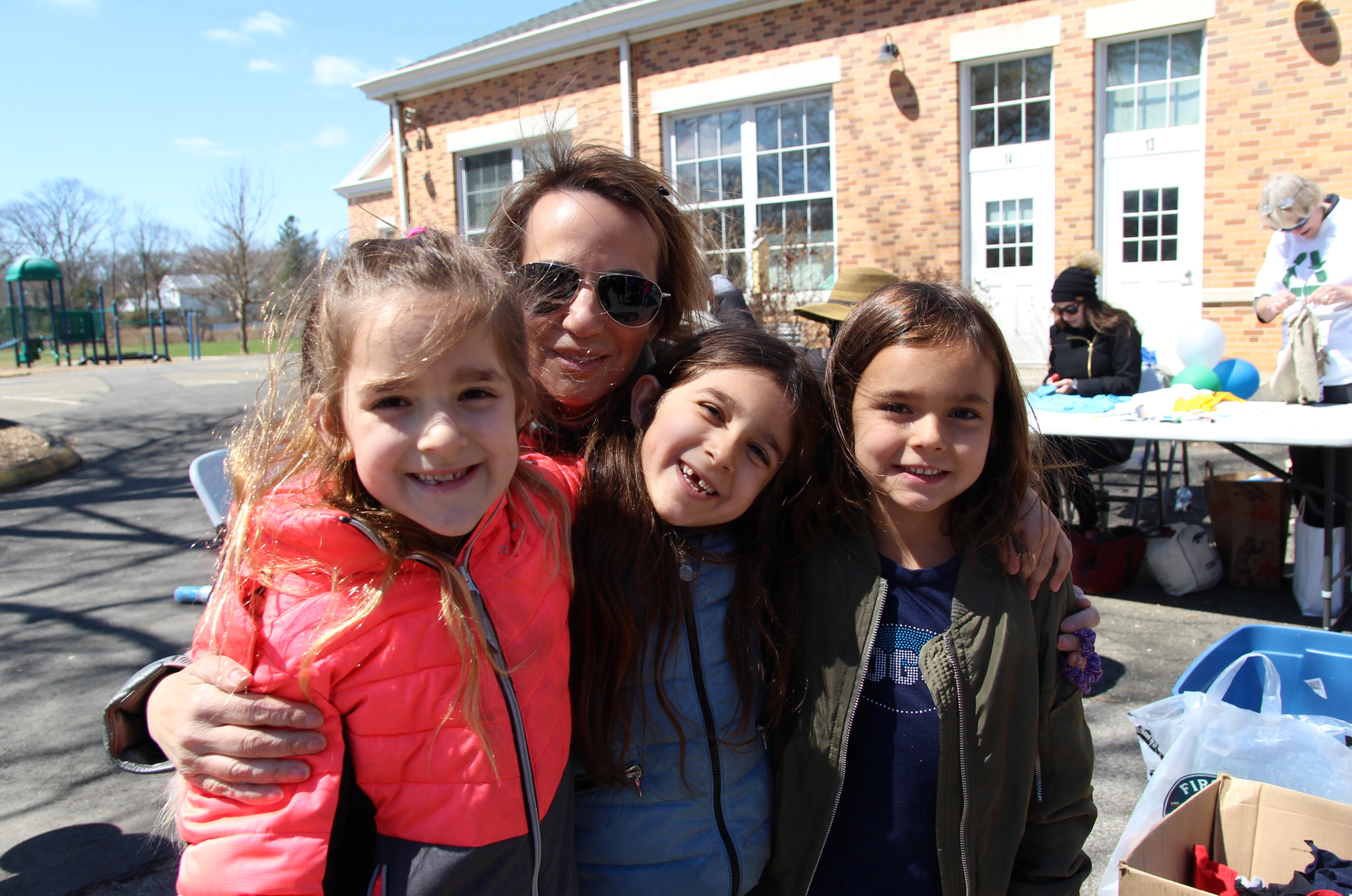 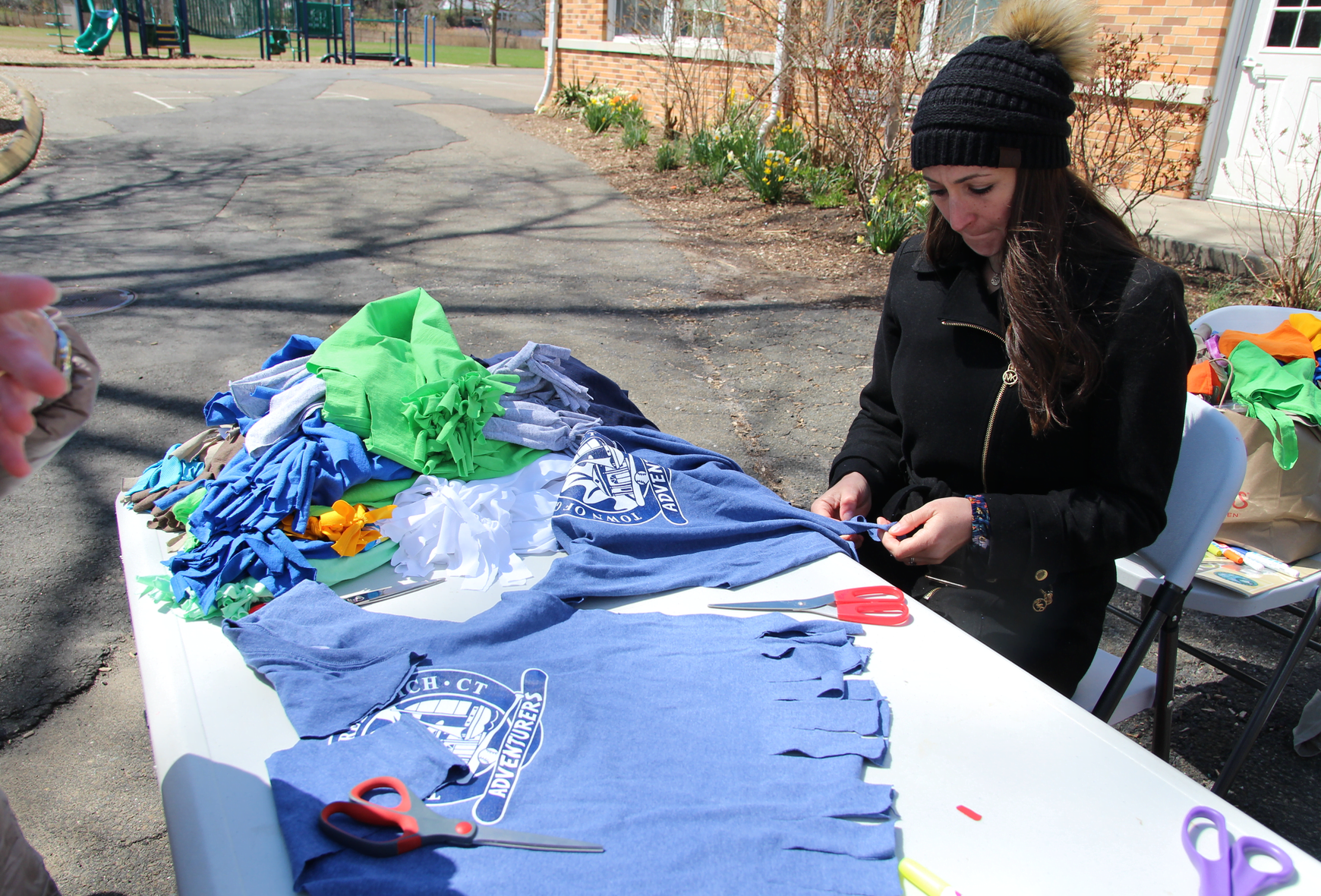 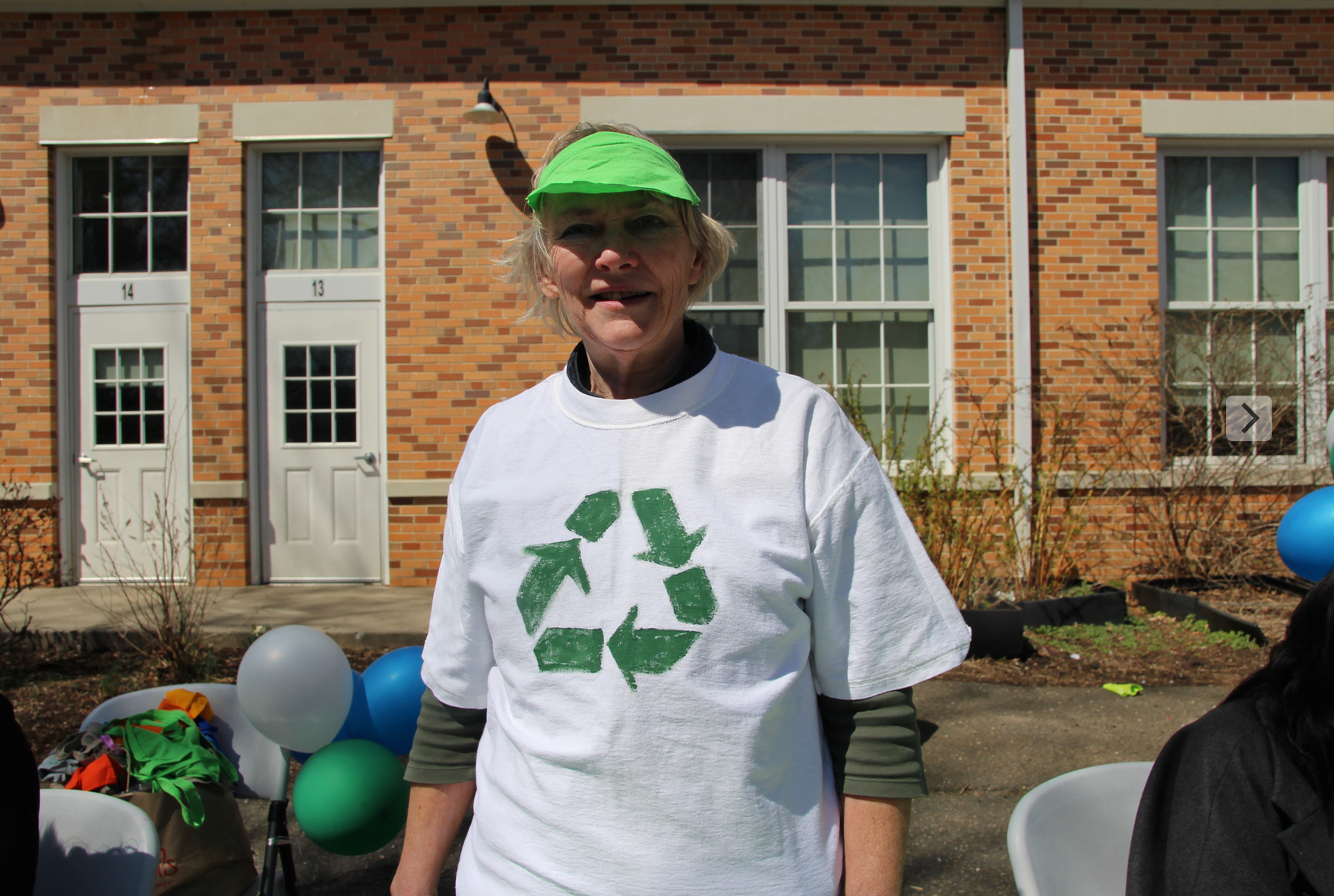 Sally Davies of the Greenwich Recycling Advisory Board wore a t-shirt she painted to promote recycling and a “visor” improvised from cuttings from the t-shirts transformed into reusable shopping bags. April 20, 2018 Photo: Leslie Yager 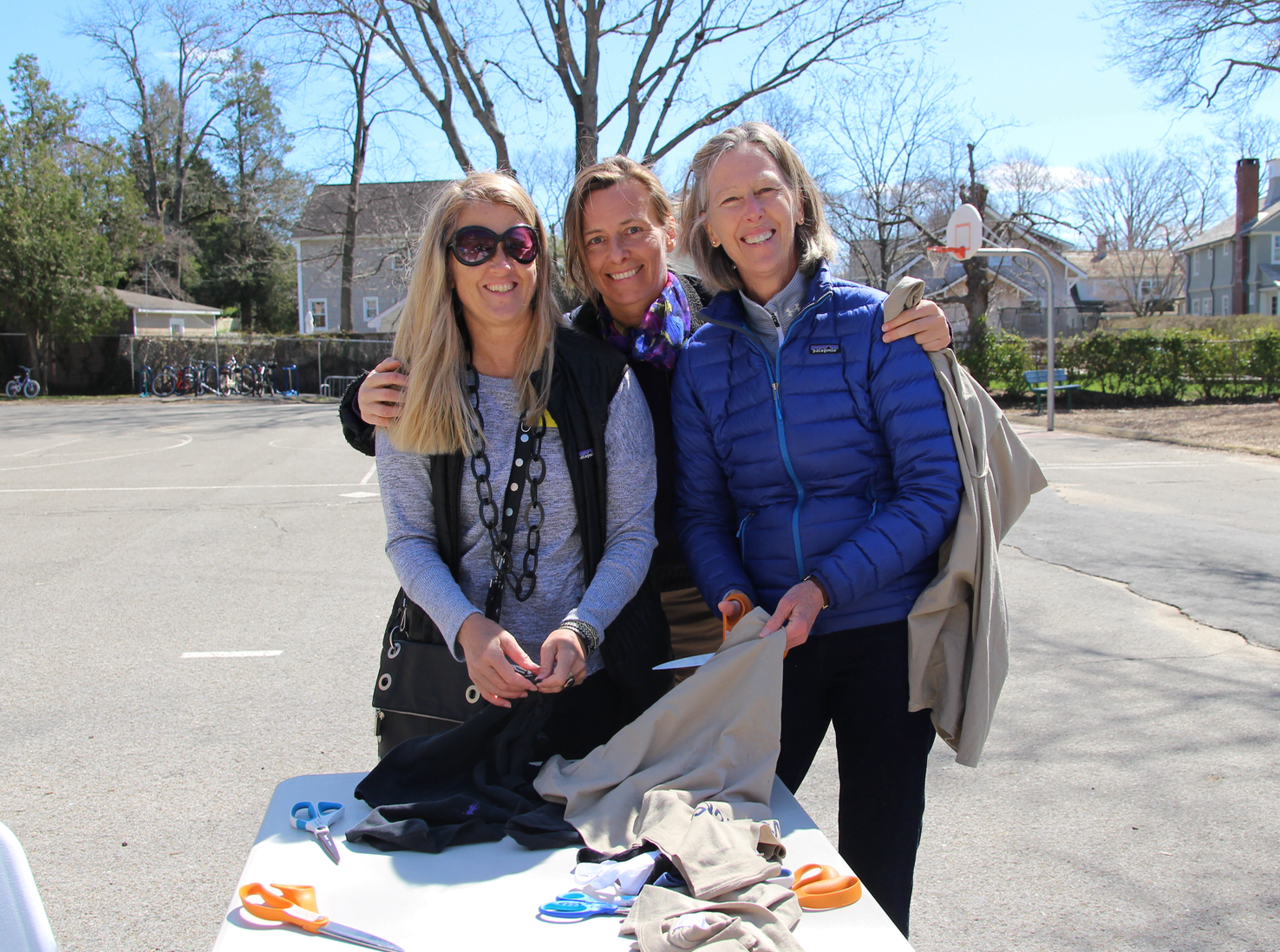 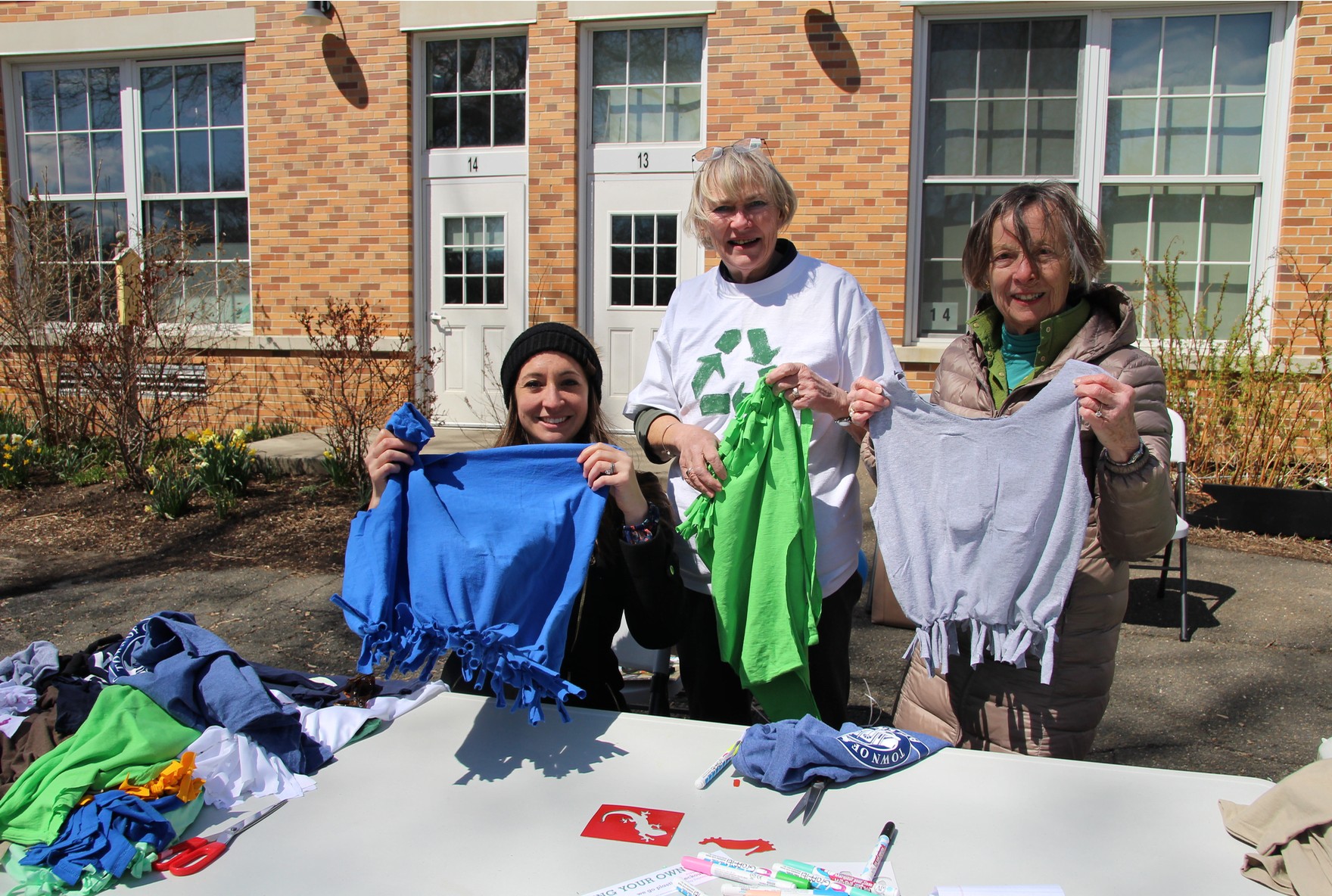 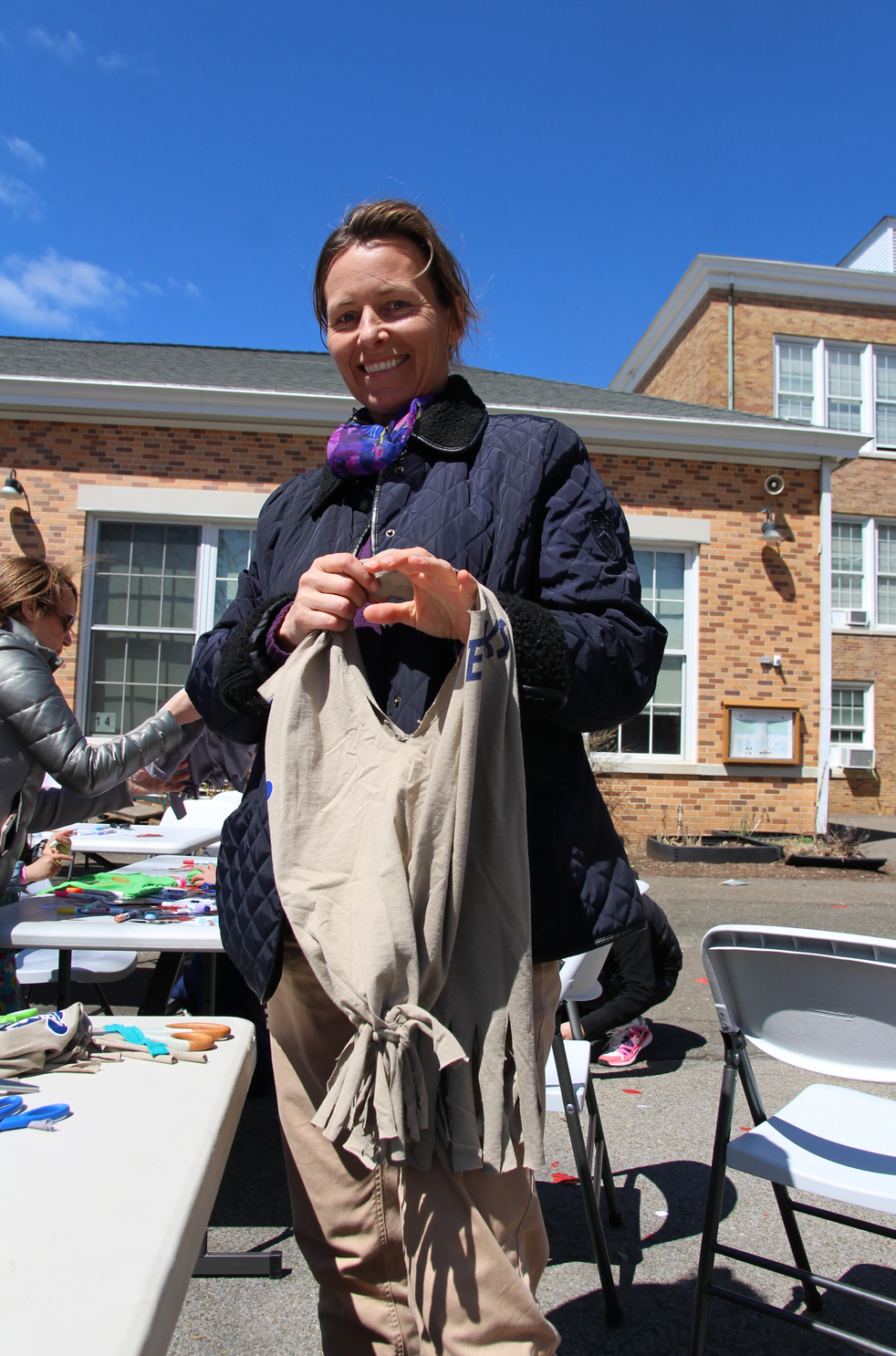 Environmental Analyst with the Town of Greenwich Aleksandra Moch who had the idea for working with Old Greenwich School on the Earth Day project. April 20, 2018 Photo: Leslie Yager