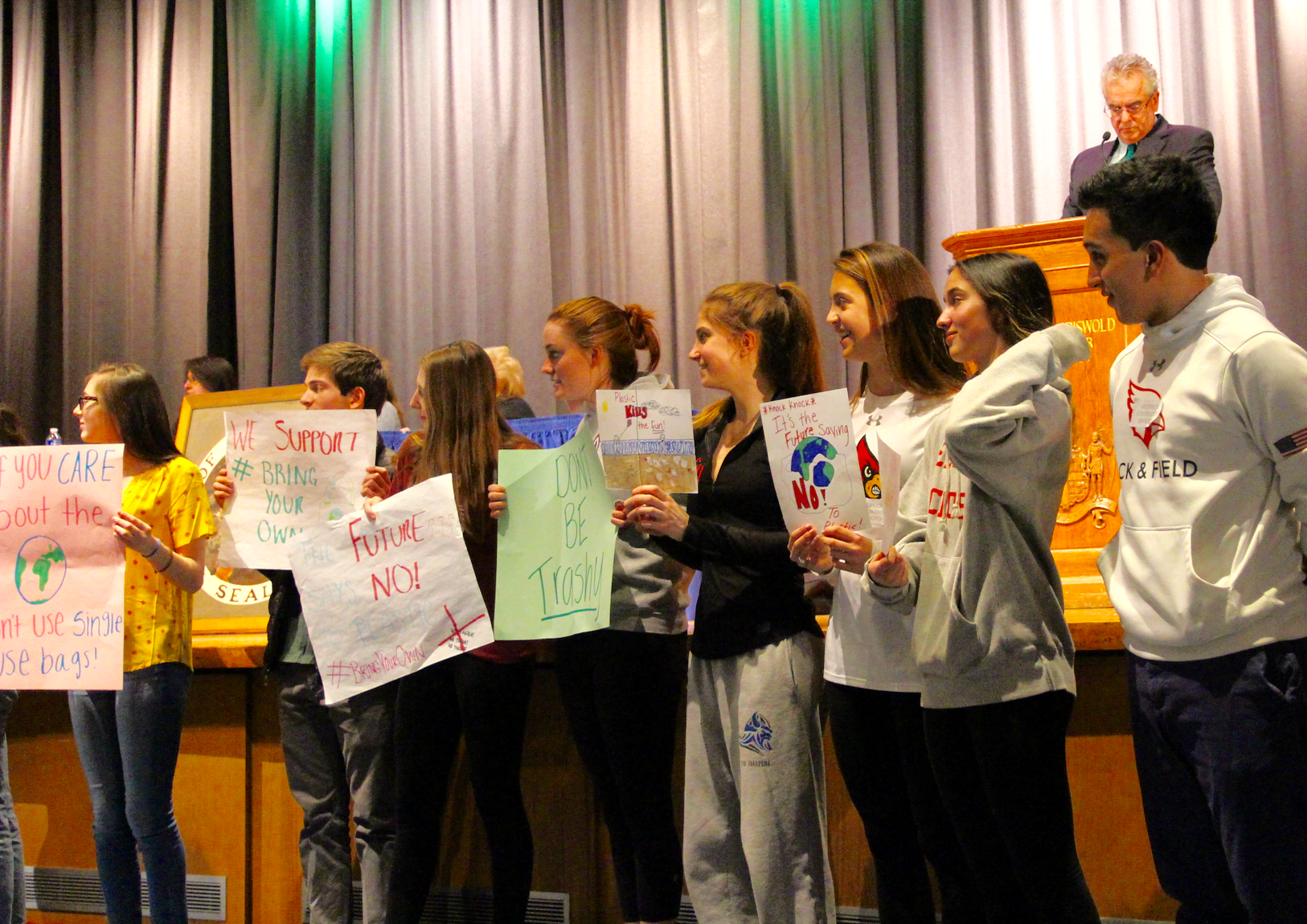 It was one year ago, on March 12, 2018, the RTM adopted an ordinance effectively banning plastic checkout bags.

Through a series of public education initiatives and cooperation by town businesses, the first year has been successful. By far, the majority of retailers were ready to transition to no plastic by the September 12 deadline.

To ensure the success of the ordinance, BYOGreenwich worked to get the ordinance adopted though community outreach and fostered collaborative working partnerships with businesses, non-profits, residents, and students. BYOGreenwich and the Conservation Commission continue to provide resources and education for businesses and residents and promotes bringing your own bag, straw, cup and anything else to stop waste before it starts.
Community partners have been essential.

Marcia O’Kane, president of the Greenwich Chamber of Commerce reflected on the ban.

“During its initial rollout, our Chamber was active in communicating specifics about the bag ordinance through our website and social media,” O’Kane said. “Overall, stores took this initiative seriously and many wanted to make very sure that they were fully compliant. Since then we have heard minimal feedback.”

The ordinance prohibits the distribution of plastic bags at point of check out. This applies to grocery stores, clothing retailers, farmers’ markets, and even the dentist. It does not make a difference if merchandise is purchased or is being given away.

The task of enforcing the ordinance was assigned the Conservation Commission of the Department of Environmental Affairs.

Patricia Sesto, Director, said, “We have 13 businesses who received extensions for compliance based on the number of bags they had in stock at the time the ordinance was adopted. Another two were denied and two others were granted conditional permanent waivers.”

“With a year behind us,” said Jeanine Behr Getz, president of BYOGreenwich, adding, “We see so many retail champions in this effort, like Fjord Fish Market, who has thoroughly embraced the intent of the ordinance.

Fjord, despite selling products that don’t easily do well with paper, has figured out a way to use paper checkout bags and meet customer needs. They met the challenge with fabulous bags.”

While the elimination of plastic checkout bags has been successful, the true purpose of the ordinance is to reduce the use of checkout bags overall. The goal is to have people bring reusable bags when they shop and not rely on plastic or paper.

“In this next year,” Sesto said, adding, “we need to get people to routinely bring bags for all of their shopping. Residents frequently limit their use of reusable bags to the grocery store. We need to move beyond this.”

It is just this situation BYO had hoped to address with the inclusion of a $0.10 fee for paper bags.

Studies have shown that even a small fee can significantly change behavior. “It is disheartening to see Whole Foods and others double bagging. This is the antithesis of what the ordinance is meant to accomplish,” stated Sesto. Other towns, states and countries have routinely adopted the fee.

The Town circulated flyers for retailers to post highlighting how this can be addressed. Checkout personnel are directed to ask customers if they need a bag, rather than automatically reaching for one.

Ask customers if they brought a bag and if they left it in the car, offer to wait so they can get it. Behr Getz remarked on her experience noting, “CVS does a great job of asking before bagging.”

In the year since Greenwich adopted the plastic bag ban, the momentum for other communities to follow suite has exploded. Westport was the first town, in 2008, to adopt a bag ban ordinance. No other town was successful until Greenwich broke through last spring. In the intervening months, 7 more CT towns have passed bag bans, most of which included a $0.10 fee for paper bags, like Stamford and Norwalk.

Another 17 towns are in progress of adopting an ordinance, and notable activity is also underway for a statewide policy, as evidenced by House Bill 1003.

Whether the ban is executed locally or at a state level, the efficacy of it depends on the customer.

Shoppers are asked to use reusable bags for all their purchases or proactively decline a bag when the item(s) can be carried. Don’t accept double bagging at grocery stores unless there is a true need.

And lastly, if you see a retailer still using plastic, let them know you are aware of the ordinance and wish they would comply or simply report it to the Conservation Department and they will follow up.

According to Sesto, enforcement has been uncomplicated, rarely taking more than a phone call for businesses to comply with the program. People shouldn’t hesitate to report non-compliance. There is no heavy-handed consequence needed – only education.