At the Jan 18 Board of Education meeting Greenwich High School student government leader Greg Goldstein said that again, stress has bubbled up as an issue among teens.

Goldstein said that in a recent student government meeting, the observation was shared that students all around were looking extremely tired and stressed.

This preliminary survey covered topics such as such as AP Classes, homework, presentations and mid terms. “There was also an ‘Other’ category,” he said. “Ideas came from everywhere. The results were eye-opening.” 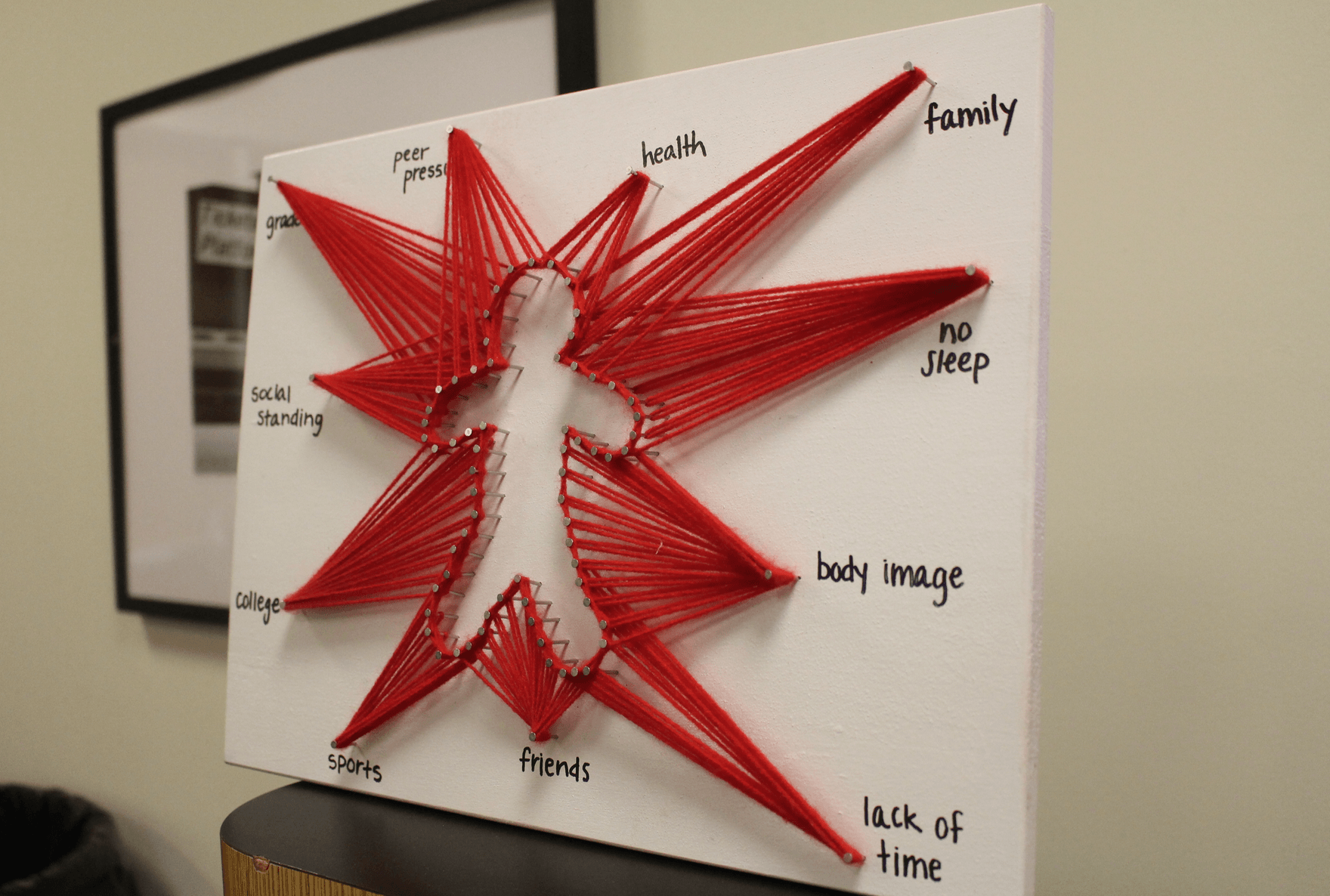 At GHS, a student artwork illustrates sources of stress. May 2016 Photo: Leslie Yager

Goldstein said students indicated that mid-terms were their number one source of stress.  A follow up survey of the entire student body got feedback specifically about mid terms.

“Yet again the results were shocking,” Goldstein said. “The majority indicated they were stressed out to a level of 4 on a scale of one to five, five being extremely stressed.”

Goldstein said thee will be a post mid-term survey, similar to the pre-exam survey that will allow comparison to student responses.

While student government doesn’t want to read too much into their results, Goldstein said they hope to share some insights with the GHS administration, Superintendent Dr. Jill Gildea and the board of Education.

“What we have done in student government is highlight an already known fact, that students are in stress, but what we did is prove it under a magnifying glass at our own school,” Goldstein said.

In the lead up to mid terms, on Jan 11, Dr. Winters sent an email to students and staff about procedures for multiple major assessments that fall on the same day.

“If a student has three or more major assessments (tests and projects, not short quizzes) on the same day, the students should do the following as soon as he/she is assigned the third or fourth major assessment:

The email a student who waits until the night before the multiple assessments are due to ask for a change may be in for a disappointment.

“The House Administrator will deny a change if the request is not made as soon as the student is assigned the third or fourth major assessment,” Winters said in the email.

At GHS, the issue of student stress is nothing new.

Before last fall’s change in school start times resulted in Greenwich High school starting at 8:30am instead of 7:30am, a committee of students, teachers and parents in 2016-2017 looked into the causes of student stress at the high school.

The committee acknowledged that sources of stress included home, especially parents’ expectations during the college process, peer pressure, and school school work. The committee chose to focus on school-related causes of stress.

Winters said that last year, there was a lot of discussion of a “hard cap” on the number of AP classes students could take.

“After much discussion and deliberation, there was no consensus reached. We are effectively working with our ‘soft-cap’ and believe this practice permits the students the most opportunity to explore AP course options at Greenwich High School.’

“We will likely take a different approach this year,” he concluded. “Rather than a committee, we will run various focus groups with students.”

Over the years, the idea of a hard cap has remained controversial whenever it comes up.

Back in Dec 2016, student government leader Joe Magliocco reported to the BOE the results of a student survey in which members voted to endorse a Hard Cap of 4 AP classes each year with 47.8% in favor and 46.3% opposed.

Magliocco said that students who opposed the idea of hard caps cited academic freedom and the right of students to make decisions on their own.

“The AP Hard Cap would mandate me to be bored,” class of ’18 William Goodman told Xu last year. “It’s important to take into account that some APs are harder than others. I think the real problem is that there aren’t strong prerequisites for AP classes.”

On another note, at the Thursday’s Board of Education meeting, senior class president, Alyssa Landberg, gave an update on class initiatives, noting that in addition to the sophomore class focus on stress, the freshman class recently conducted a fundraiser at CAVA, juniors are busy planning their prom, and seniors are working on SRO, which will take place in March.

This year the theme is Feelin’ the V18E!

As for upcoming events, the sophomore class is holding a blood drive on Feb 23.

Then, in May, student government will reprise their food truck fundraiser, and proceeds will go to the Make a Wish foundation.

Should Greenwich High School Have an AP Hard Cap? Students Weigh In  (Feb 2017)