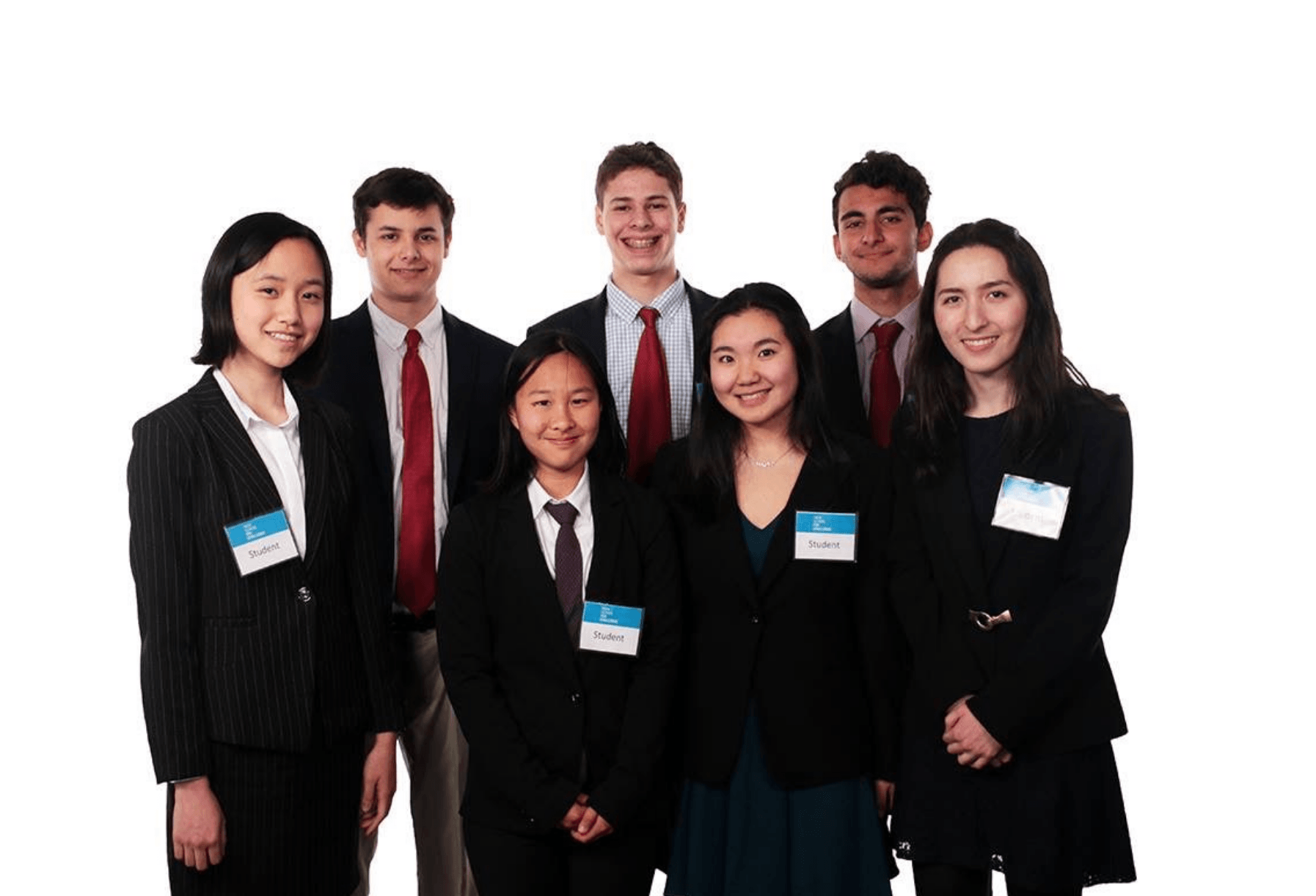 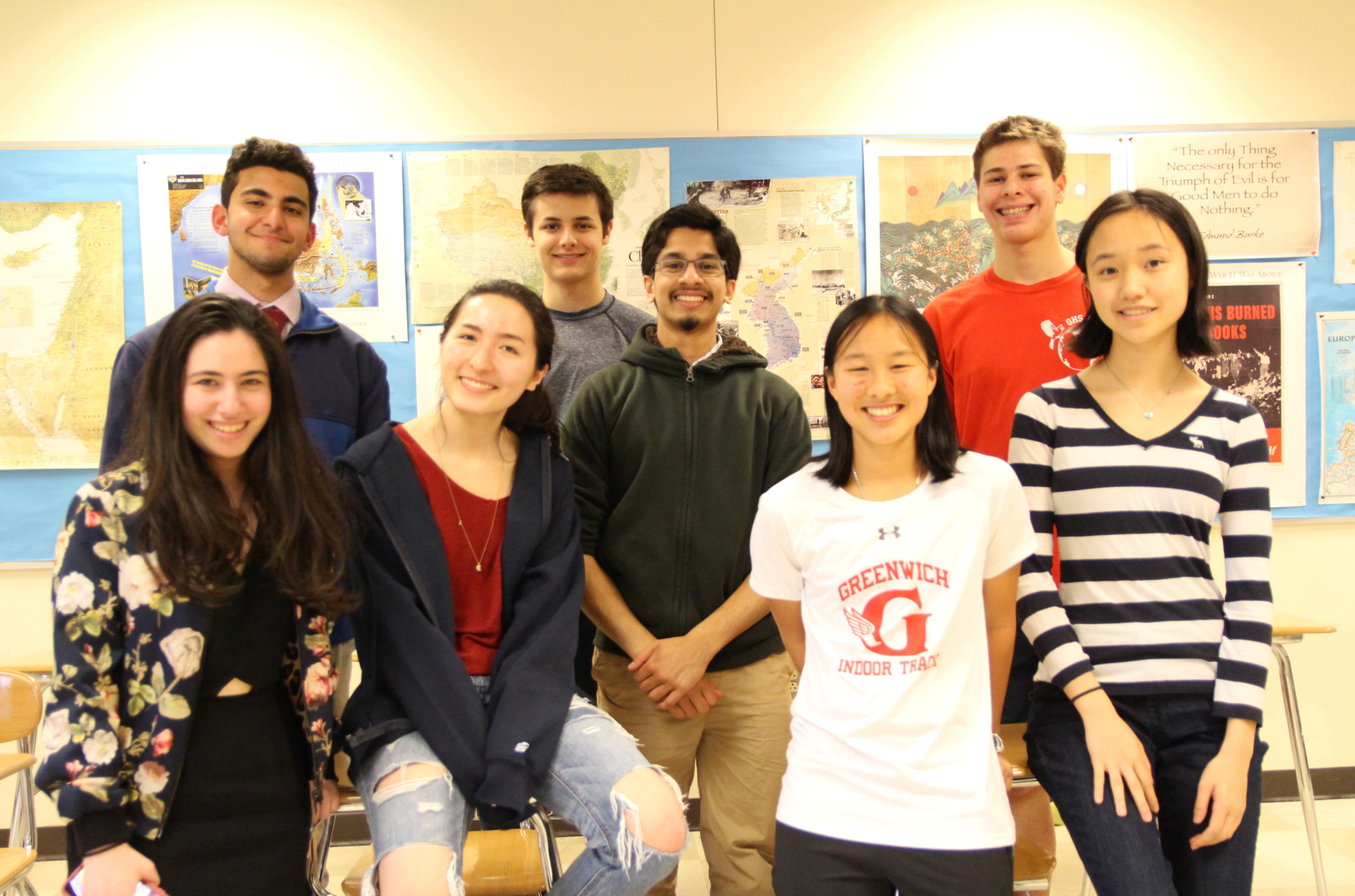 Not bad considering it’s only their second year participating in the high school challenge.

“Last year we didn’t advance, but this year we made semi finals,” Tiedemann said.  The schools in the New York Fed region are super competitive and include New York City, Northern New Jersey and Fairfield County.

“This totally happens outside of class,” Tiedemann continued, as he explained what the Challenge is all about.

In the Challenge, which is designed to offer students a real-world economics experience, teams play the role of monetary policymakers by analyzing economic conditions and recommending a course for policy.

The GHS team, comprised of 11th and 12th grade students, competed in the Liberty Street division, which is for students who take AP Economics. That division included 69 teams, each having students as presenters and observers.

The presenters role play as members of the Fed. The others help research and give feedback.

At GHS, younger students compete in the Euro Challenge, which is also advised by Mr. Tiedemann.

Some of the Euro Challenge and Federal Reserve Challenge students are enrolled in Tiedemann’s economics class, but, he explained, “This is not what we do in class.”

In fact, Junior Julia Blank participated in both competitions without studying Economics in school.

“Coming from the Euro Challenge last year to the Federal Reserve Challenge this year, it’s very difficult, but interesting,” she said. “I’ve not taken an economics class, but this has served that purpose and I’ve learned about the economics I’ve wanted.”

Zane Khader, a junior who is taking AP Economics, said, “In class we’re learning about graphs and their theoretical impacts. We’re learning about some relationships between inflation and unemployment. But the graph you study in class is not in effect in the world. That is intriguing to me.”

“The four of us all took AP economics last year as juniors,” senior Jovita Li said of the group of presenters. “We did have that background of all the textbooks traditional macro and micro, but we discovered there is a ton of information we never covered in the course. And it’s not on the good old College Board curriculum either.”

Akshay Joglekar, a junior, said the Federal Reserve Challenge is unlike the Euro Challenge, which he participated in last year.

“It pertains to a lot more because it’s the US economy,” Akshay said. “There are a lot more indicators to analyze than the Euro Challenge, which focuses on a specific country.”

For the Federal Reserve Challenge, students role played as members of the Federal Open Market committee, a real life group who meets every 6 weeks.

Tiedemann said there is advantage of preparing for both challenges simultaneously because the older students help coach the younger ones.

Melissa Woo, a junior who didn’t take economics this year but played the role of chair in the Challenge said, “The Federal Reserve Challenge was such an amazing experience. I went from never taking economics class to giving a presentation on macro economic indicators and recommending monetary policy.”

“There’s a lot of different indicators we study, and a lot of the time they’ll tell us different things about the economy and at the end we have to make a policy recommendation,” said Matthew Meyers, a junior. “Often the indicators will say different things. It’s a good challenge to decipher which are noise versus which are reflecting real trends.”

Matthew said begin part of the group made the experience fun. “There was a rule that each of us has to contribute somewhat equally. You have to have synergy. We spend a lot of time together on weekends as a group working on our synergy.”

In fact, during school break the students in the Federal Reserve Challenge reserved space at the Greenwich Library to continue their preparations.

“We all roll played as real people in Federal Reserve. We had placards,” said Catherine Yang who played the role John C Williams, the head of the New York Fed.

“Mr. Williams was at the Challenge and we got to take his picture. We were both wearing purple ties,” she said.

“The Challenge showed us what a difficult job the Federal Reserve has,” Jovita said. “We had to take into consideration how all the states are doing and all the different indicators.”

Monique Nikolov said that while role playing members of the board of Federal Open markets committee, which recommends policy for Federal Reserve, she and other presenters chose their words very carefully.

“We had to use cautionary language. We’d say for example, ‘The economy may go in this direction,’ or ‘We would expect that,’ leaving room for ambiguity and change. You have to talk like an econ wonk because if the Fed says something wrong it looks bad, they hedge everything they say. We learned how to speak in a noncommittal way.”

Kent Schneider, a senior who took AP Econ as a junior, said the Challenge was a chance to apply education in to a real-life type setting.

Akshay Joglekar, a junior, said it was interesting to see the policy that the Fed actually did recommend. “There was news that the Fed was going to have the same policy we recommended during the Challenge,” he said.

“What’s the purpose of your education if you can’t apply it to real life scenarios?” Kent asked.