The way Greenwich High School social studies teacher Ian Tiedemann explains it, two of the clubs he supervises came about by accident.

Tiedemann, who teaches AP Economics and freshman Global Studies, has been willing to teach a variety of subjects at GHS. Currently he’s writing the curriculum for a new class next year, Ancient Civilization. Along the way, he has come to know many students eager to learn outside of class.

He was already the advisor for Model UN, a huge time commitment, but he has a soft spot for students motivated by the love of learning, so he advises the Economics Club too. 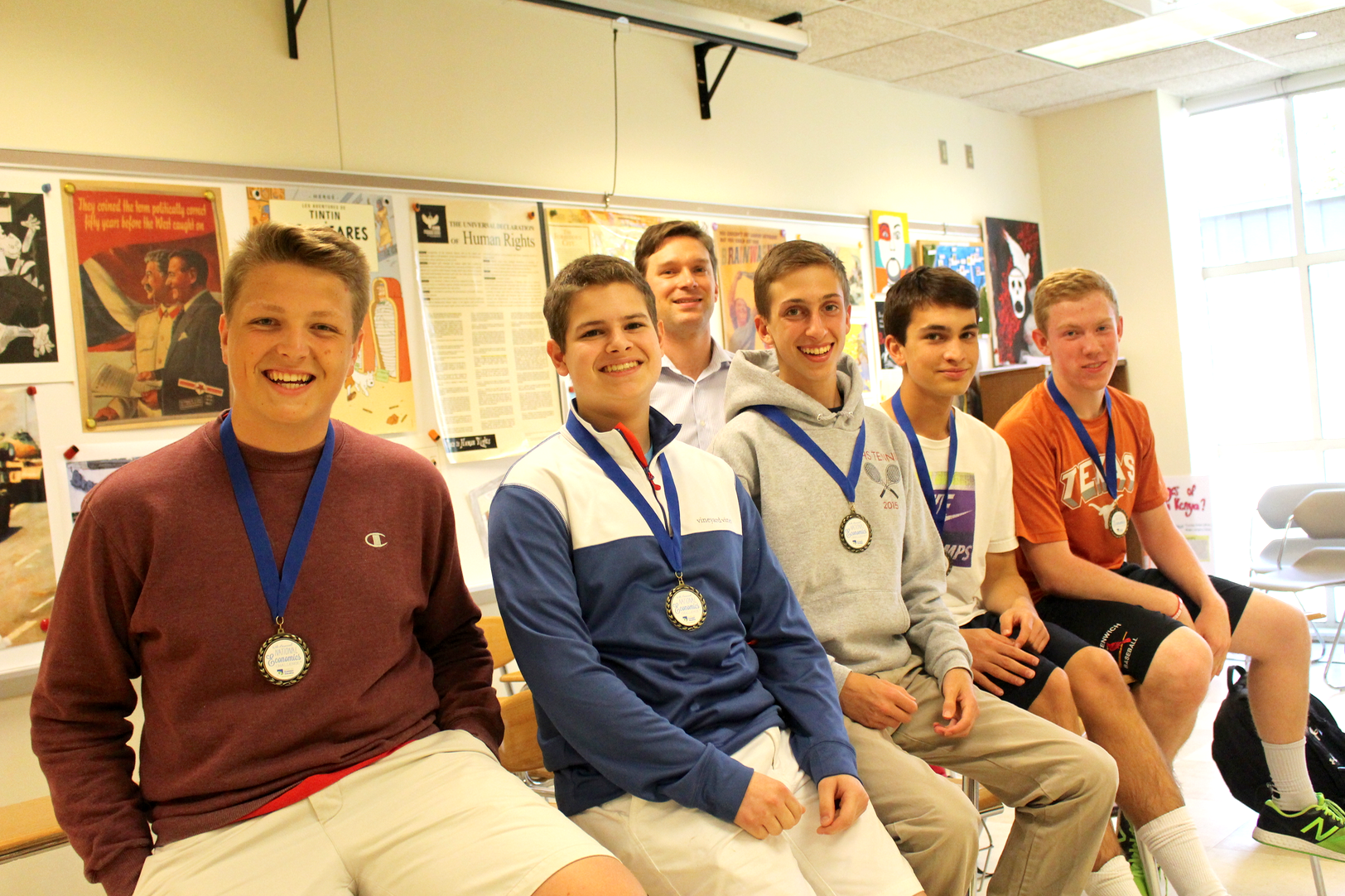 Back in 2016, some students he knew from previously supervising the Frisbee Club, prepped on their own to enter the National Economics Challenge under his leadership and were very successful. Left toright: Alex Luna, Aaron Peterson, Will Goodman and Alex Khan, Jack Kerry, and club advisor Mr. Ian Tiedemann standing behind the boys. May 2016 Photo: Leslie Yager

Under his supervision, juniors and seniors in the Economics Club began participating in the Federal Reserve Challenge.

From there, a self-selecting group of 9th and 10th graders who draw from Model UN and his Global Studies class – plus their friends – participated in competition for younger students: Euro Challenge.

“It all came about as an accident because of the kids’ interests,” Tiedemann explained of the addition of the Euro Challenge. “I saw how similar the programs were. They’re looking at things like gross domestic product, monetary policy and fiscal policy.”

Tiedemann said the two competitions also involve similar skills: speaking, argument, effectively presenting, and knowing complex economic concepts they didn’t do in a class. “This is totally beyond class,” he said.

Tiedemann’s students, who on the day of their interview with GFP presented him with a flowering plant in a pot that each had taped a thank you not to, were beaming with pride and gratitude.

“I’ve built a relationship with these students. And those kids have brought other kids in,” Tiedemann explained of how the Euro Challenge team of 9th and 10th graders formed.  The students meet before school on Wednesday mornings.

As Tiedemann tells it, last year the students did not qualify.  But this year something surprising happened. The team qualified and advanced, making it from being one of 125 teams at the start, to the top five.

The way it works is teams compete by selecting one of 19 countries who use the Euro, present on its current financial state, and then make policy recommendations before a panel of judges, including how to reduce deficits and debt, combat unemployment, or devise solutions for Europe’s economic growth.

This year they studied Finland’s slow economic growth, though it took ages to pick a country to focus on.

“They looked at monetary, fiscal and structural issues to help Finland grow economically at a faster rate and become a more competitive economy,” Tiedemann said.

The students went to Astor House for the first round presentation. Afterward, they made a day of it. “We went to Sylvia’s in Harlem for fried chicken and waffles, “Tiedemann said. “We also went to the New York Historical Society’s Vietnam exhibit.”

“If the experience ended there, that would have been fine. They learned a lot. They got to represent. They’re a wonderful team. They are very hard working,” Tiedemann continued. “Melissa is my general, my boss,” he added, referring to Melissa Woo.

“But then I got the phone call that they advanced, and made it to the top 25 teams in the country,” Tiedemann said.

“We didn’t know we were going to the next round. We didn’t expect to get called back,” said Julia Blank. “It wasn’t until after a full week with no practice. And we had to suddenly prepare with just two weeks. We spent a lot of time after school and in the mornings.”

“There were a lot of email threads late at night,” said Sofia Pronina.

The team returned and presented again. From there, the 25 were whittled down to just five.

“They presented in a large auditorium where the New York Federal Reserve makes their presentations,” Tiedemann said. Afterward the top five were announced – everyone else went home.

Not only was GHS in the top five, but their name was pulled first. Though they’d been prepared to go home, instead they had to present first of the final five.

The accomplishment was significant for many reasons.

“None of us take economics,” Melissa said. “At one of the teams that’s a power house – Mt. St. Mary – they all take AP economics.”

“Another competitor is a team from The School of Business and Management,” Matthew Meyers said.

“These students have taught themselves at the level of what would be an AP Economics class,” Tiedemann said, adding that for practice, the team presented to his AP Economics class. “They asked them questions and gave them feedback. We timed them because they are docked points for going over 15 minutes.”

“This year we did a lot of drills and practices,” Julia said. “We ended up 45 second under.”

“They presented in front of lights, cameras, and microphones before professional judges who work for Bloomberg and NPR,” Tiedemann said. “One of them was a podcaster whose voice I recognized immediately.”

While other teams’ presentations had an element of acting, with ‘staged conversations,’ the GHS students created their own unique format.

“We each had roles depending on our expertise. For example, Matthew was the monetary expert,” Melissa said. “It made for a good dynamic.”

While their first victory was celebrated at Sylvia’s in Harlem, the second victory was followed by a trip to Chinatown for dim sum and ice cream.

The students explained that the first and second place winners get a trip to the embassy of the country they represented to present their solution. Had they done so, the GHS team would have gone to Finland’s embassy in DC.

“If you kids hadn’t gotten called back I’d have been just as proud,” Tiedemann told the students. “Just getting to the second round is huge. Especially considering last year they didn’t get called back. It’s important the community know the type of work they did.”

“Since it’s only a 9th and 10th graders competition, there were only three freshmen on the team. We plan to bring in some new 9th graders next year,” said Sofia.

“It’s their responsibility to build a new team,” Tiedemann said. “We’ll pick a new country on the Euro and dive right in.”

“Mr. T is so devoted,” said Julia Blank. “He went above and beyond for us. And since we don’t take Economics, we were able to learn a lot from him.”

“He taught us valuable life skills that we’ll keep after we graduate,” Sofia said.

“I’m touched by their accomplishment. You build bonds with them in 9th grade and watch them grow up,” Tiedemann said. “The growth from beginning to end is astounding. The learning is what’s important. I’m so proud of them.”

For the Love of Learning, Ian Tiedemann and the Greenwich High School Are Winners