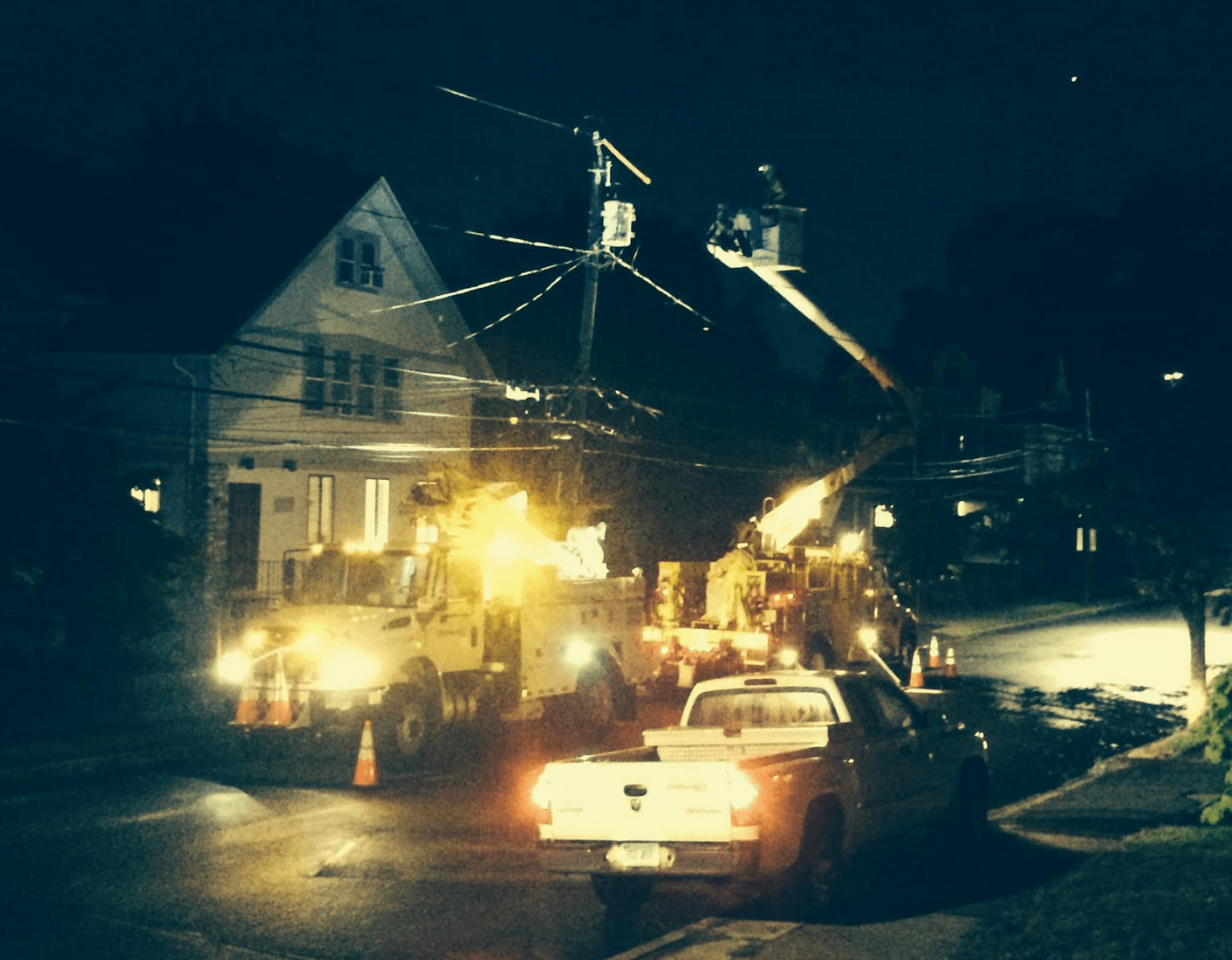 This story has been updated to include comments from Frank Poirot from Eversource’s media relations.

At the Monday Board of Selectmen meeting on Oct 15, First Selectman Peter Tesei said there had been an “after action meeting” between Town officials and Eversource following the Sept 4-5 power outage in Greenwich.

The outage started Sept 4 at 4:50pm, which is during peak load period.

At its worst, the outage resulted in 10,000 customers losing power. (See: Now it’s 92° and Much of Downtown Greenwich is without Power)

Tesei said the purpose of the after action review, which is done after any major incident, is to see what went well and what didn’t.

“The system has major frailties and can’t meet the distribution for the Town,” he said.

The first selectman said his board had earlier Monday morning received a summary from Eversource about the outage.

According to Eversource, a circuit between North Greenwich substations had been out of service from the previous weekend and was under maintenance. Also, two underground circuits had faulted within 30 minutes of each other, and field crews found two faults on each circuit.

To prevent damage to another circuit, Eversource disconnected the remaining line to the Prospect Street substation. Because multiple circuits were out, customers supplied by the Prospect and North Greenwich Substations were interrupted for several hours.

As load fell off the system, customers were restored, though some customers had to be resupplied from stations other than those normally used. For example, the Glenville area was transferred from its normal Prospect feed to the North Greenwich substation until the system was returned to normal on Sept 6.

Eversource supplied generators to large Greenwich customers to relieve load from the system until all circuits were restored.

The utility said there are plans to install higher capacity cable on some circuits and replace aerial cable along the right of way between Prospect and Cos Cob stations.

“To their credit, to be fair, Eversource anticipated some of the issues,” Tesei said. But, he added, when the feeders failed, “it’s like cards –  they’re juggling to try to shift the load.”

“They said the lines get very hot,” Tesei continued. “We asked them, ‘Why not upgrade the lines?’ and they say they would do so.”

Tesei gave Eversource some credit for bringing in generators for larger customers. But, he said, “We expect more from them. We expect more reliability.”

Selectman Litvack had strong words. “They say they are now going to install a higher capacity scale. Why now?” he asked. “What are they thinking about in advance? They’re fine to react once something goes wrong, but I would think we should expect more from them.”

Tesei said the utility’s focus has been on the substation project, but that the Town of Greenwich wants more answers on this particular outage.

“The distribution is key,” Litvack said. “People have to get their electricity.”

Tesei said the utility added the Tomac substation about 40 years ago, but suggested more is needed.

“We have to ask about capacity with all the redevelopment that’s taking place,” Tesei said. “We asked them, ‘Is the system equipped?’ They didn’t have good answers in my opinion.”

Further, Tesei said Town officials queried P&Z, and that chair Richard Maitland replied that demand on the power grid is not taken into consideration when applications are considered.

“This is one of the problems with a public utility,” Mr. Litvack said. “They are not planning ahead. They’re reacting, and meanwhile, we’re suffering.”

“And to think they now have water too. That’s scary,” Tesei said, referring to Eversource’s announcement in June 2017 that they had reached an agreement to acquire Aquarion Water Company for an enterprise value of $1.675 billion, comprised of $880 million in cash and $795 million of assumed Aquarion debt.

“If we had not demanded the meeting, we wouldn’t have even gotten the response. We have to keep the spotlight on, no pun intended.”

“They indicated in their material they’ll do more outreach,” Tesei said.

“Outreach is public relations,” Litvack said. “They have an operating problem. They said they are going to install higher capacity cables. Why wait for that?”

On Tuesday, Frank Poirot from Eversource media relations wrote in an email, that the utility was not in agreement with Mr. Tesei and Mr. Litvack’s comments.

Poirot said the September outage would not have occurred if the new substation planned for Railroad Avenue was in place and operating.

He went on to say, “Since 2012, we’ve invested tens of millions of dollars to improve the reliability of the electric distribution system in town. This work includes upgrades to the underground networks and substations, while strengthening the overhead network with stronger poles, wires and cross arms.”

Poirot said trees are the single biggest cause of power outages. “We continue to strategically trim or remove trees that threaten our lines.”

Poirot said the new substation, when completed, will be another vital part of Eversource’s delivery system, providing the area with another source to quickly and efficiently move the power to where it is needed, especially during high demand days.

“Our engineers and planners are always looking at ways to make the electric system stronger and we remain committed to doing what is needed to ensure Greenwich continues to have reliable service,” he said.