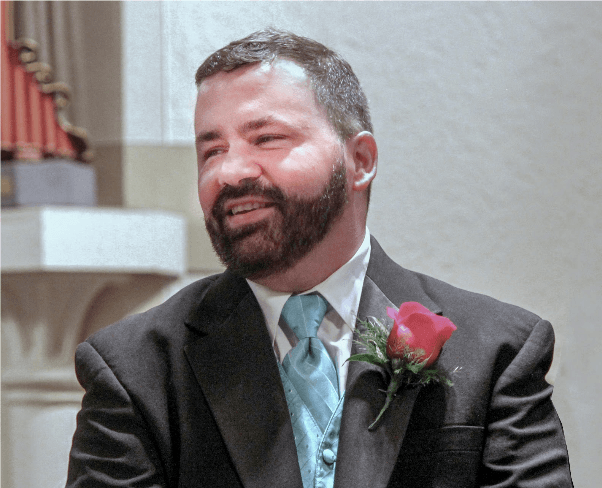 Robert E Lopez died on February 4 surrounded by his loving family and friends.

He was born on August 18, 1968 to Edward Bernard Lopez III and Barbara Faye Howard in Redbank New Jersey.

He graduated from Greenwich High School in 1986 and attended Pace University. Rob worked for Electrolux Corporation for several years before purchasing and running Sterling Vacuum in Norwalk for 25 years with his wife Karen.

He lived in Newtown, Connecticut in a house he lovingly restored and rebuilt from top to bottom.  He then moved to Easton where he and his wife Karen started their family and resided for 12 years. Rob continuously renovated and improved this house as well, using his woodworking and construction skills to customize every room.  He was a jack of all trades and enjoyed every aspect of building and paid close attention to every detail. Robert was a lifelong learner and earned licenses in Connecticut for Home Improvement Contracting, L5 Electrician, Life Insurance, and Series 7 investment.

Rob was very involved with the Boy Scouts of America throughout his life and in 1986 he earned the highest rank, Eagle Scout as a member of Explorer Post 22 of Greenwich Council.  He also distinguished himself as a member of the Boy Scouts Order of the Arrow, being elected Chief of his Lodge, and took great pride in competing on the dance team with his fellow Scouts, notably at national Native American events.  He was also a member of the U.S. Naval Sea Cadets. Rob greatly enjoyed passing along the skills he had learned, and when his son Andrew became a Scout he volunteered as both a Cubmaster and Scoutmaster and helped to train many other leaders.

Rob was a talented artist who designed many Boy Scout patches.

In high school he was known for painting jean jackets of his favorite bands, always making him easy to spot! Rob loved nature, spending times outdoors camping and fishing and was happiest sitting around a campfire with those he loved most.  Rob was noted in his younger years for enjoying role-playing games, especially Dungeons and Dragons, and was known to never lose a game of Risk. Music and playing drums were one of Rob’s passions. He entered a contest in Modern Drummer magazine and won cymbals signed by his favorite drummer, Neil Peart of Rush.

Rob was cherished for his loyalty and devotion to family and friends and his sense of humor and intelligence.  Robert lived a life built on hard work, integrity, honesty, and a deep devotion to his faith as a Christian man.  He could always be counted on to help a friend in need. Rob was a person of few words, but he was always to be listened to for the best punchlines or reciting movie quotes that perfectly fit the moment.  He was a patriot who loved his country and was proud to have lived the American Dream, becoming an entrepreneur and running his own business for many years.

Robert is survived by his ex-wife Karen Trusty and their beloved children; Andrew and Valerie, his brother Edward Bernard Lopez IV of Jacksonville North Carolina, his sister Laura Lee Ashby of Canton, Georgia and many loving nieces and nephews.  A wake will be held on Friday, April 12 from 5:00 to 8:00 pm at Cody-White Funeral Home, 107 N. Broad St., Milford, CT.

A memorial service for Robert will be held on Saturday, April 13 at 1:00 pm at St.Catherine’s Chapel, 4 Riverside Ave, Riverside, CT.

A reception will be held immediately following the service.

In lieu of flowers, donations may be made in Robert’s name to Scouts BSA, Greenwich Council www.greenwichscouting.org or Connecticut Yankee Council, www.ctyankee.org.