The Dept of Public Works application to upgrade a bridge on Sound Beach Ave and add a traffic circle by Perrot Library again came before the Planning & Zoning Commission on Tuesday.  The bridge, which is not readily apparent to the eye, as it is more of a culvert where Cider Mill Brook feeds through to Binney Park than a traditional bridge, is in poor condition. The application was for the Municipal Improvement for the project and preliminary site plan.

As with previous hearings, a number of neighbors testified about their objections to the adjacent proposed traffic circle, which DPW Deputy Commissioner Jim Michel said was necessarily tied to the bridge project because of the type of state grant the project would qualify for.

P&Z chair Richard Maitland noted “the purse closes” on the possible grant in September 2018, which is the deadline for final design on the project. Currently it is at the 30 percent design phase.

Mr. Michel said that as part of the BET’s review of the budget, they conditioned the project on it getting approval of the state funding.

“We need a committal from the state first,” Mr. Michel said. “In the event something changes with the state funding and we don’t’ get it, we have to go back to the BET and talk about that.”

Mr. Michel said the overall project cost is approximately $4.9 or $5 million, but that doing just the bridge upgrade might cost $3.5 million.

There was talk about a report from consultants CDM Smith suggesting instead adding culverts with retractable tidal gates downstream, under the railroad bridge by West End Ave.

Mr. Michel said that study was strictly based upon the riverine flooding and takes into account only a standard high tide. (Riverine refers to water from rivers, brooks and streams.) He said the study did not address volume or elevations of water dealing with tidal influences.

Mr. Michel said that in his professional opinion, creating the culverts would worsen flooding during tidal events, “because it allows water to get back in. The gates might protect those culverts, but with tides, the water will come in and fill up the entire area.”

Rene Seblatnigg disagreed with Mr. Michel. She said she had read the CDM Smith report. She said the study factored in both tidal water and riverine water.

Ms. Seblatnigg brought up the idea of an exemption from federal regulations based the historic nature of the roadway and setting.

“All I heard discussed tonight was whether the bridge was historic and some comments about being on the National Historic Register,” she said.

Mr. Michel said there is a registry of bridges, and that the project qualifies for state funding because of its poor condition. He said bridges are ranked from 0 to 9 and that without the repairs it might need to be have signage declaring a weight limit, or to have only one lane open, with cars in opposing directions taking turns crossing.

Mr. Michel said that waivers are through the Federal Highway Administration, meaning the waiver would have to be a national one, rather than a state designated scenic roadway.

“I called someone in the DOT bridge section, and talked extensively about the waiver process. If it is just an area that is considered historic, his comment was that gets to be a difficult sell. His general statement was Connecticut is 200 years old, so the entire state is old. Where do you stop with that regulation? They’re trying to hold tight with the standard of the National Historic Registry.”

Mr. Michel said that an updated count of trucks, meaning anything at least 50 ft long (eg school buses, landscaper trucks hooked to trailers) indicated 900 and 1,000 trucks pass through the intersection at Laddins Brook, Sound Beach and Harding on a daily basis, which is 6 to 7 percent of volume.

Asked about raising the bridge, road and rotary to a 100 year storm elevation, Mr. Michel said that would result in a continuous path, and avoid “islands” in the event of a flood. He noted the neighbors’ concerns about water impacting the Perrot Library.

“There is a way for that water to outlet in larger storms,” he said. “We looked at the amount of water draining towards the library. Primarily it is only the water that lands from the sky on the library property.” 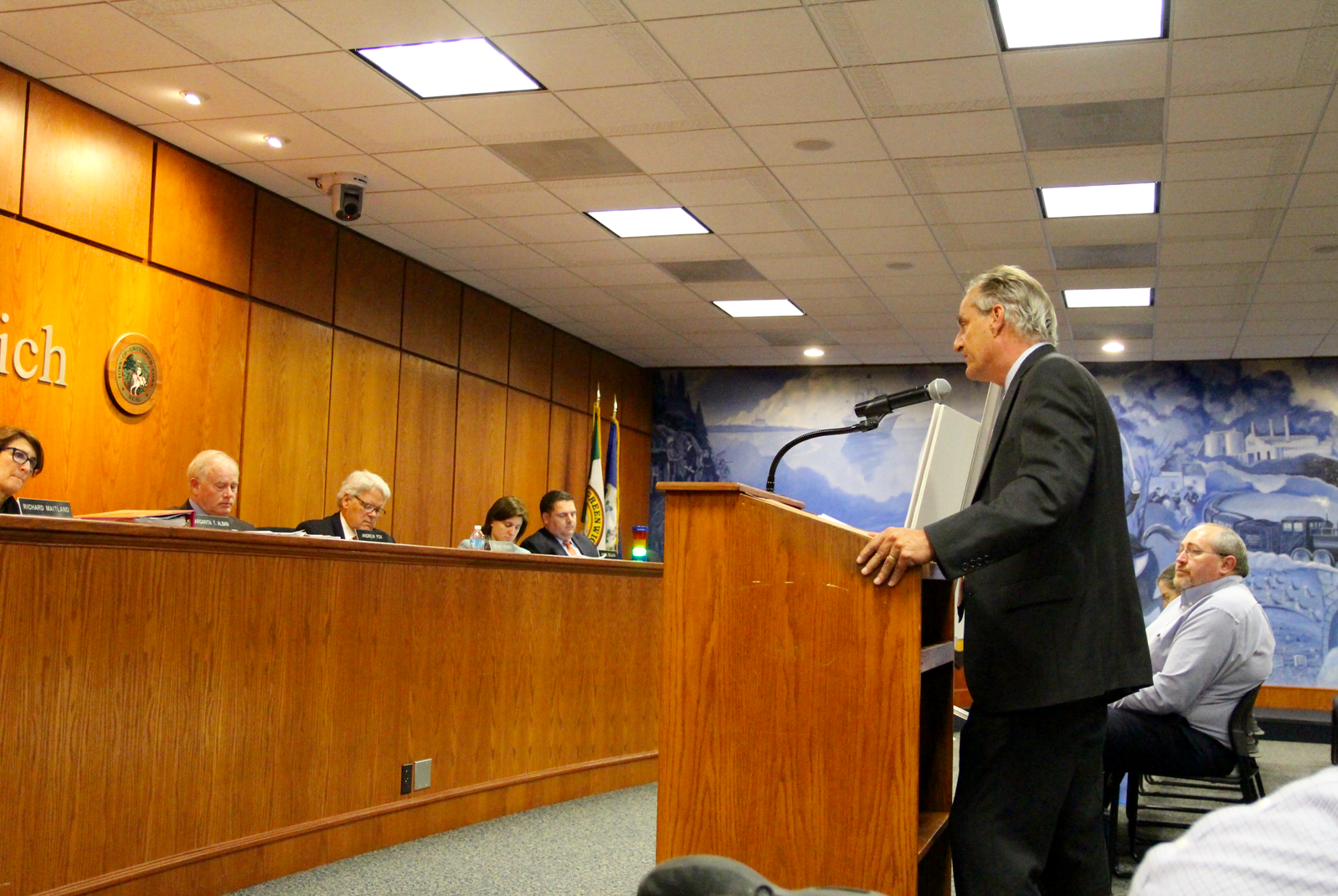 Still the attorney representing the directors of the Perrot Library, Chip Haslun, said the library had contracted with engineers but have not been able to show them any hydrology  report.

Mr. Michel said that report had been provided to the library, but not until the day before the P&Z meeting.

“Neighbors want to know where the diverted water will go. He (Mr. Michel) has talked about impact to the library, but what about the neighbors?” she asked.

Giving the DPW Mr. Michel a “C-” for his homework, Ms. Baker asked the commission to consider unintended consequences of raising the road in front of the library.

“The town would be negligent to start the project without an answer (where will the water go). Where are the details of the accident history?” she asked. She also asked whether  2-1/2 accidents a year was a lot or a little, noting there were no benchmarks or comparisons to other intersections.

Finally, and to great applause from the 50 or so residents in attendance, Ms. Baker said, “Please put the brakes on this project until all our questions are answered to our satisfaction. We risk losing the essence of what makes Old Greenwich special.”

Another neighbor who received applause from residents in attendance was Max Breier of 11 Harding Road. “How many pedestrian-related accidents have there been?” he asked. “I’ve been a resident since 1971 I haven’t heard of anyone getting hit by a car crossing to the Perrot.”

“One question was whether it’s possible the bridge be repaired and keep the traffic circle the way it is?” Breier said. “His answer was, ‘It will be a challenge.’ That’s not an answer. It sounds like, Yes it can be done.”

Later, Mr. Michel said he had learned of one pedestrian fatality from a longtime neighbor who said that took place in 1960, but he had not been able to find the death in the records of Greenwich Police.

Lastly, Mr. Breier said no one had talked about aesthetics and how library patrons using the reading room would lose out.

“It’ll be nearly completely gone,” he said. “It’s a beautiful place. There are deer that graze, and an otter that visits.” He said that the new circle would encroach on the reading room by 60 to 80 ft.

“I don’t understand how you can make such a big traffic circle and say you’re reducing pervious surface,” Breier continued. “It’s as if you’re taking a giant section of grass from the reading room and putting it into the center of the traffic circle.”

Later, Mr. Michel said that encroachment was exaggerated, and that rather than 60 to 80 feet, the encroachment would only be 30 to 40 feet. “We’re only impacting that much in that corner,” Michel said, his comment meeting with groans from the audience.

Residents also had concerns that the new traffic circle would entice Stamford residents to pass through the rotary.

Katherine Donnelly, a realtor who lives in Old Greenwich, said that government buildings feature safety precautions to prevent traffic running into them.

Yet, she said, “What we’re doing is making the library target practice. It doesn’t make sense to have vehicles be able to plow into the property.”

Paul Pugliese said he feared the project would make the roundabout more convenient and that more people would use it as a cut through to and from new housing on Southfield Ave in Stamford.

“Maybe it’s better for traffic calming and the neighborhood to keep it as it is,” he suggested. “When an 18-wheeler goes by the library and you’re by that bench, the top of the wheel will be above your eye level. No one will want to enjoy that space any more.”

Also, Ms. Donnelly said flooding remained a possibility for residents. “It seems the tax payers in the area are really against it. I wonder if we have a voice, and a viable voice?” she asked. “As a realtor, I’m very worried about the loss of residents’ property values.”

She urged the commission to consider the possible unintended consequences, “rather than just taking money and running, and leaving the residents holding the bag.”

Mr. Michel repeatedly said the new traffic circle would make the intersection safer. He argued that currently there is no reason for traffic to slow down as it heads south toward Old Greenwich village, but that the new circle was designed as a traffic calming mechanism. He said currently Sound Beach Ave traffic passing straight through the intersection moves on average between 28 and 32 miles per hour, but the new rotary is designed to move traffic through at 15 to 20 mph.

Of the residents’ suggestion that only the bridge be repaired, Mr. Michel said, “Could we put it back exactly the way it is today? Potentially. It would not be compliant, and it would not be funded through the state. It would all come from town dollars.”

“Anything is possible,” Mr. Michel conceded. “Is it the best alternative? It is the alternative that provides the safest situation.”

At the end of the discussion P&Z chair Richard Maitland returned to the topic of the hydrology report.

“The last time we discussed the hydrological study for the library and a considerable amount of time has passed and we haven’t received it. Why?” he asked.

“There was a preliminary hydrological survey done,” Mr. Michel said.

“But the attorney for the library said he hadn’t received it,” Mr. Maitland said.

“It’s still in draft form. But it was given to the library yesterday,” Michel said.

“We try not to release too much information when it’s in draft mode because it’s not fully vetted,” Mr. Michel replied, eliciting groans from residents. “There is no desire to cause a negative impact to the library. That will continue to be studied. We are not asking for an exemption for the drainage of the library. We would do that necessary work.  There will be a full drainage report.”

The P&Z commission discussed what to do with the application, whether it would be possible to approve the Municipal Improvement application but diminished to only include the bridge improvement.

Commissioner Alban said she was concerned that if the commission approved the preliminary application, that would add momentum toward a final application.

In the end, no vote was taken. The commissioners instead left the application open, and asked the applicant to return with one consolidated package of the most current studies and renderings, and to give the Perrot a chance to have the engineers they contracted to look at the hydrological study from the DPW.

Residents on Bridge Fix and Raised Rotary in Old Greenwich: “Fix the Railroad Culvert, Not the Rotary!” (March 8, 2018)