On Tuesday night residents turned out for DPW commissioner Amy Siebert’s presentation on the proposed upgrades to the Cider Mill Creek bridge and adjacent rotary at Sound Beach Ave by Laddins Rock Rd and Harding Rd in Old Greenwich.

The potential upgrade came about after the town sought CT Dept of Transportation funding for upgrades to the bridge that would bring the bridge up to the 100 year storm requirements.

As part of the application, the Town was required to look at the surroundings, including the rotary, and bring them into compliance with federal standards.

Siebert and DPW engineer Gabriella Circosta-Cohee defended the project, saying the upgrades would make for a safer intersection. 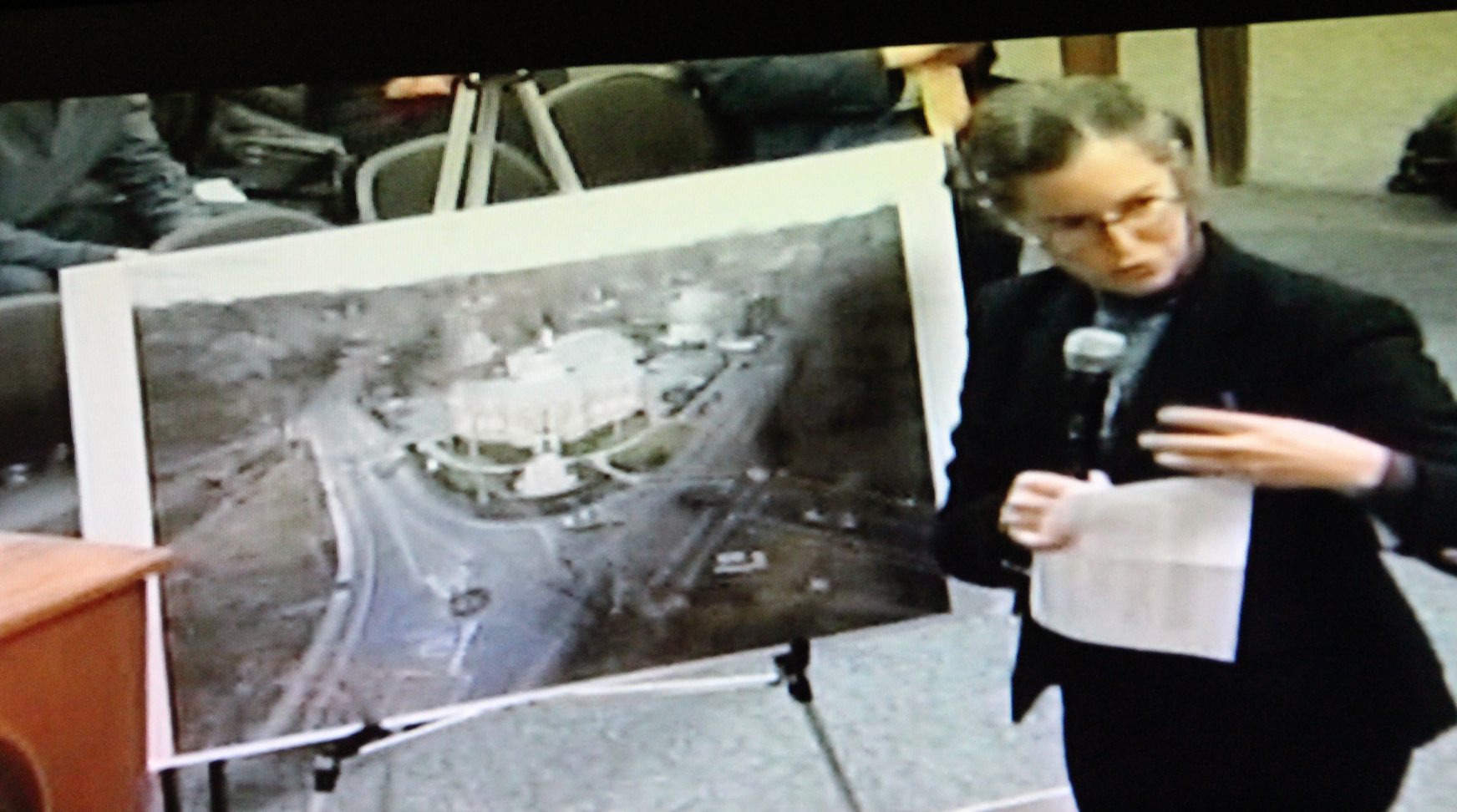 Neighbors weren’t buying it. All but one of the residents who spoke said the existing rotary is safe and expressed their concern about losing the character of the village. They also said they feared for the impacts to the Perrot Library, which will effectively “sink” once the rotary is raised several feet and put against a three foot retaining wall.

“How do we keep it the gateway into a charming community?” P&Z commissioner Margarita Alban asked Siebert.

“We understand people are attached to what they know and are accustomed to,” Siebert replied, adding that landscaping and pavers can soften the scale of the project.

Both the commissioners and members of the public continued to balk at the sheer size of the rotary.

“No,” Siebert said, adding that the proposal is already below standard size, and it it were any smaller there would be issues with trucks mounting the curb.

Siebert said that at POCD input sessions DPW heard residents fears for the loss of  their village character, but that when her department undertakes bridge projects they are required to look at accident data as well as roadway standards “to bring ourselves into compliance and make the area safer.”

“That bridge is in poor condition and needs to be addressed,” Siebert said, adding that to be in compliance, the roundabout  needed to be made safe for both cars and pedestrians.

She said that the Flood and Erosion Control Board had been made aware by emergency responders that the roadway goes under water in floods.

“We want people to be able to get in and out of Old Greenwich village, including emergency responders,” she said. 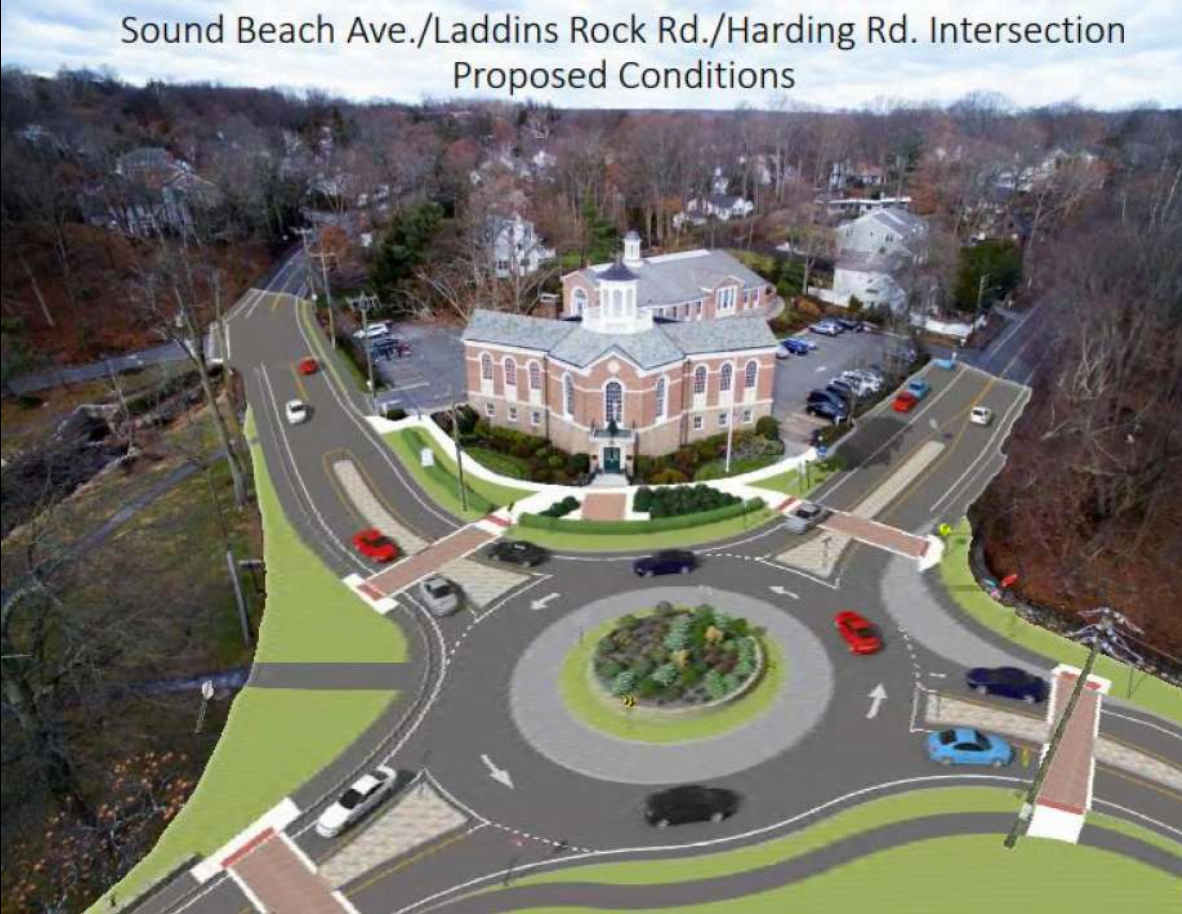 The rendering presented does not include a significant change, which is that there will be two southbound lanes heading into the rotary: one to continue around the rotary, and one to turn right and head to the village of Old Greenwich.

The project will go through DOT and have the blessing of the Western Connecticut Council of Governments (WestCOG).

Siebert said changes had already been made to reflect public comment. For example, the traffic circle has been moved slightly to one side to avoid impacting the Perrot Library, and that extra sidewalks they originally wanted to accommodate bikes and strollers were narrowed back to the standard 5 ft width.

Also, she said they were trying to save some of the trees along Sound Beach Ave. Other trees would be removed and replaced.

“We’re trying to make our infrastructure more resilient around town,” Siebert said, pointing to the new Grass Island locker rooms as an example. And, she said, “Like it or not, we do have to accommodate large vehicles. Ideally you don’t want them going over the center circle.”

Commissioner Andy Fox pressed Siebert. “Is there anything we could do to minimize the diameter?” he asked.

Siebert argued the design worked toward “traffic calming” as the speed limit on Sound Beach Ave is 25 mph and the rotary is designed to slow cars to 20 mph.

“You don’t want someone whisking through at 25 mph. We’re reducing the amount of asphalt. This could be made quite attractive,” she said.

Commissioners had concerns about pedestrians in the crosswalks at such a big traffic circle.

Specifically, Commissioner Peter Levy said he was worried a pedestrian might be intimidated to venture across.

Ms. Circosta-Cohee said federal guidelines require “splitter islands” which are indicated by different color pavers.  She  also explained the concept of “places of refuge” half way across the cross walk, and said signage is also dictated by federal guidelines, and will include a proposed flashing beacon with pedestrian push buttons at the cross walk in front of First Congregational Church.

“You need to yield to a pedestrian in a cross walk,” Siebert said. “You’ll have proper signage saying to yield to the pedestrian.”

“If somebody wants to cross, they might be a bit intimidated by all the traffic going through,” Mr. Levy said. “If it’s just the state law that somebody has to stop for a pedestrian in a crosswalk, that might not account for how intimidating it is.”

“I’d be more comfortable navigating this than the situation that’s there today,” Siebert insisted.

Mr. Levy said the areas of refuge are not well defined and asked if balusters could could be added?

Ms. Siebert again said there is a different paver treatment to indicate the “area of refuge.”

Commissioner Fox asked why the traffic circle radius was so large, and was told that was necessary to accommodate large vehicles and tractor trailers.

Mr. Maitland said the current rotary functions more as a T-intersection than a rotary.

He pointed out that the DPW’s renderings don’t reflect a change they made resulting in two lanes  on Sound Beach Ave at the rotary  – one to go around the rotary and one to take a right and head to the village.

Siebert reviewed the accident history at the existing intersection. There have been 26 accidents in the years 2012-2017. Though she said the impetus for the project was flooding and upgrades for the bridge,she said, “We think it’s reasonable and reasonable to address something with 26 accidents in six years.”

“There is no amount of accidents that indicates it is dangerous,” Ms. Circosta-Cohee said, adding that the accident history was not the reason for the project. “We’re required to look at accident history.”

Asked when the intersection last flooded with water going over it, Ms. Siebert said 2012, which was Hurricane Sandy. But she said, “It was pretty late at night and we couldn’t even get over there. There was substantial flooding in town then.”

“It (flooding) doesn’t happen all the time, thankfully,” Siebert said, adding that marine flooding and coastal flooding could converge in this location. “Our feeling is when you have an opportunity to do improvement to an area like this with an important access route …you want that to be passable.”

Siebert said when DPW reviewed the project with the Flood and Erosion Control Board it became clear that it was less expensive to elevate the area.

Neighbors finally had their say and argued they didn’t want the raised road solution just because it would cost less. They described the the rotary project as an abomination and an assault on the neighborhood.

“If we can’t do it right, let’s not do it at all,” said Will Morrison, 23 year resident of Old Greenwich.

Morrison questioned whether the existing rotary design is unsafe. He said that of the 26 accidents cited by DPW, half of them took place in front of the church, not in the rotary.

“The intersection is not just a hectic convergence of roads to be treated as a functional project to be solved by engineers alone using highway guidelines,” Morrison said. “It’s a public space that conjoins Binney Park,  the Perrot library and the Helen Binney Kitchel natural park.”

Evan Walker said raising the roadway three feet would impact the Perrot. “The tires of trucks will be higher than the benches outside the library,” he said. “Let’s add to the project the raising of the Perrot Library. What started out as a project to fix a bridge… It’s really a culvert over a stream. We’re replacing it with a much larger project. If the bridge is the problem, let’s fix the bridge. This thing just grows and grows.”

State Rep Mike Bocchino said his office had received 20 phone calls and emails regarding the project, of which only one was in favor. He said people understand the bridge needs to be repaired, but that since the state is coming in with money, the project expanded.

“This bridge has to be repaired,” Bocchino said. “But the timeline is disturbing for such a small bridge.”

Bocchino said Sound Beach Ave is a major artery to the village, railroad and beach, and asked the P&Z to look into an accelerated bridge repair to condense the timeline.

P&Z Commissioner Alban said her understanding was that in the process of redesigning the bridge, it’s a requirement that the existing roadway in the vicinity be reviewed to determine its compliance with federal highway standards.

“That’s when it was uncovered that the existing conditions at the intersection did not meet standards,” she said.

“You’re putting a bandaid on a mortal wound,” said Allen Lovejoy, questioning the wisdom of the plan. “You gotta do culverts guys, because the houses upstream are going to flood.”

“The beautiful Jeffersonian Perrot Library is going to be sunk,” he continued. “I read a letter sent by the Town to the Perrot today, threatening that if they don’t get to build their retaining wall on the Perrot property, they’re going to build one that’s two feet higher with guardrails on it.”

Lovejoy said the railroad culvet was built in 1840 when the land was strawberry fields not houses. “When it rained the fields absorbed the water. Now it doesn’t get absorbed.”

“Before you pass this, I suggest more work needs to be done. This project does not preserve the character of the village of Old Greenwich,” Lovejoy concluded.

Furthermore, he said the raised rotary would result in headlights shining into the library.

“I get the feeling that what is pushing this project and made it grow is funding is available if the town checks off additional boxes on things they’re taking care of,” Haslun said. “I don’t see a significant accident history there.”

“It appears to me this is more money driven than it is based on trying to improve the traffic circle and making it more safe,” Haslun said.

Cynthia Smith said the existing intersection causes drivers to “slow down and think” and that the proposed rotary design would encourage people to speed through.

“We could save the state of Connecticut money on this one. It’s the tail wagging the dog,” she said.

Christopher Mill asked, “Is it possible to do the bridge which we all understand needs to be done, and do nothing else?”

Arlene Lomazzo an Old Greenwich resident over 50 years who served on the pedestrian safety committee, was a lone supporter of the raised rotary.

She said what was intended to be a “flower rotary” now is a major shortcut to Stamford.

“People don’t know what to do there, especially at rush hour,” she said. “We’re not the way we used to be. That rotary needs to be fixed to be safe.”

After the public comments Mr. Maitland said there will be another hearing in two weeks, on March 20. The application was left open.