Greenwich High School’s Tysen Comizio has been named the National Strength and Conditioning Association’s 2018 All-American Athlete of the Year.

Nominated by Coach Patrick Mediate, Tysen, who is finishing his junior year, was chosen by the organization from athletes across the country.

Selected for his athletic accomplishment and dedication to strength and conditioning, all while maintaining academic prominence at GHS, the NSCA found Tysen to be a role model for student-athletes.

Tysen said his selection was based on film and statistics. “Coach Mediate sent videos of me Olympic lifting, my football film and the numbers I have in the weight room,” he said.

“The award came as a surprise,” said Tysen, who received a certificate from NSCA. “The reason I work out and condition frequently is not for the award, but for the outcome on the field.”

Tysen said in the short term his goal is to leave Greenwich High School winning a state championship. “All these things I’m doing are part of that process.”

“We had a great season last season, but didn’t finish the way we wanted,” he said of the CIAC Class LL Finals in which Greenwich lost to Darien Blue Wave 31- 22. Still, Tysen said the Cardinals defeated many teams.

“Everyone is going to be coming for us now, with the amount of teams we beat,” he said. “We have to practice harder than anyone else. It’ll be a tough but fun year.”

Tysen said strength and conditioning are valuable for football players not involved in an in-season activity.

“We start when football season is over,” he said, adding that Coach Mediate and Coach Avery wrote up the players’ strength and conditioning program.

“We lift four times a week. There is also speed and agility training three times a week,” he said adding that those movements translate onto the field.

Tysen and his teammates go to Bobby Valentine’s sports complex in Stamford to work on their mobility, stability and running. “We do sprints and cone drills to move our feet fast and emphasize arm movement,” he said. “The technique of running is important.”

“We like athletes to run on the same surfaces they’re going to be playing on,” coach Marinelli explained of the trips to Stamford. “If you constantly change surfaces, it will negatively impact you. The indoor facility replicates the facilities we play on.”

Tysen, who is finishing a challenging junior year that in addition to football involved academics, looking at colleges, getting a driver’s license and standardized tests – said he hopes to play football in college.

“I’ve wanted to do that since I was really young,” he said. “As long as I can play football for, I’ll do it. It’s what I love.”

Tysen, who has two older sisters in college, also has a younger brother who is a freshman at the high school. “He’s also on the football team, but there’s not a lot of overlap,” he said, explaining that the freshmen team has a year to mature and compete against other freshmen teams. “It’s a big transition year.”

Beyond strength and conditioning, Tysen won’t have to wait until fall of his senior year to play football. Spring football is around the corner.

“The state allows nine practices and one game in the spring,” coach Marinelli said. “We have an inter squad game in June.

“There are ten days between Memorial Day and graduation to work on the fundamentals of the game,” Marinelli said. “There’s the skills, and there’s the camaraderie. This is a chance for us to really drive home what we’re about as a program – coaches, staff and players.” 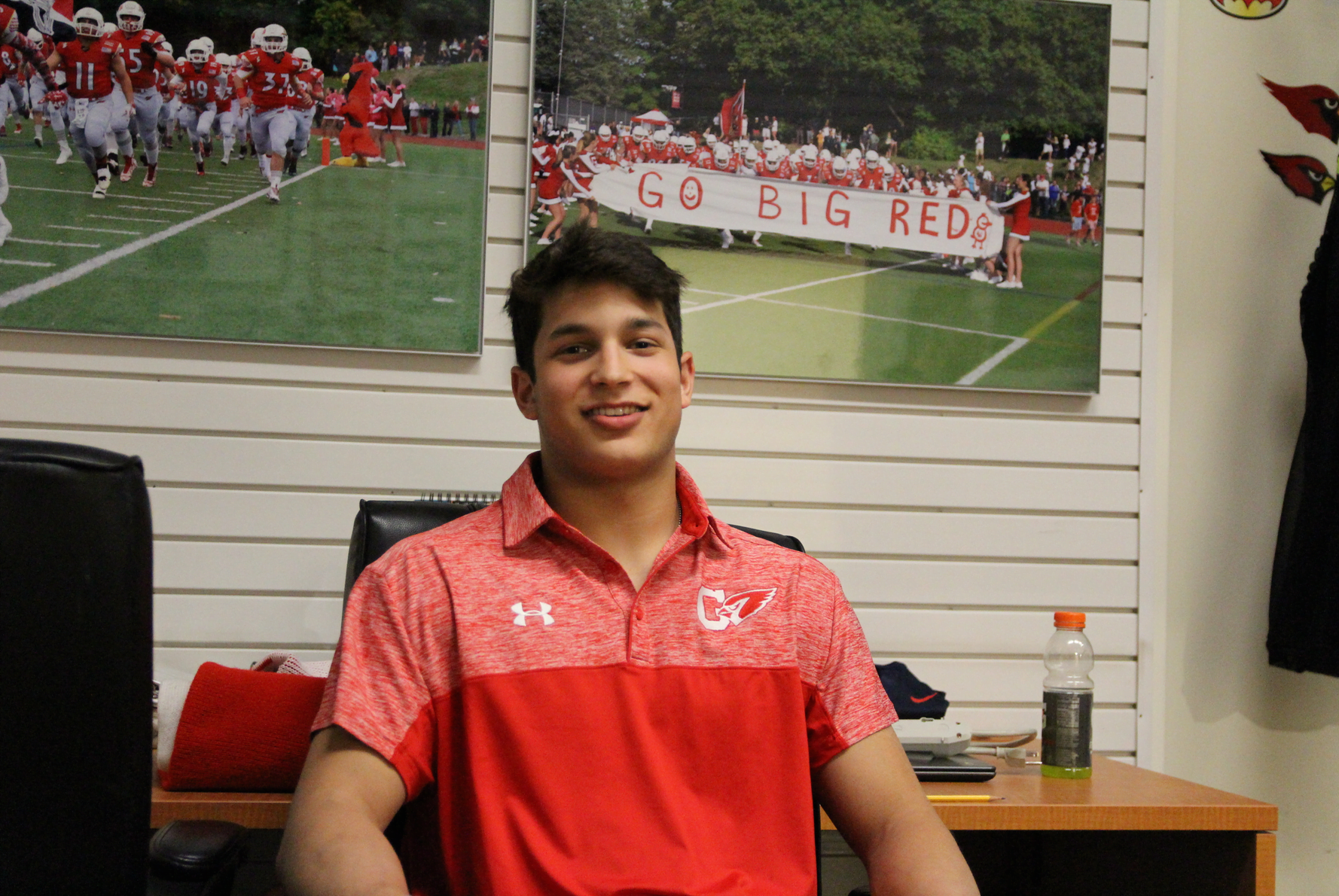 “The award is nice. It’s a bonus. But he’s not after individual awards,” coach Marinelli said of Tysen. “I don’t have to worry about a kid like Tysen. If I didn’t coach him, he’d still be a great player. He’s unbelievable with his team mates. I’ve never seen him be negative toward a team mate. I have to worry about other kids. It’s almost more rewarding to take someone struggling to help them get to the next level, whether it’s playing or going to college.”

“The game does so much for us we want to give back,” Marinelli continued. “Along the way someone did that for us. None of us would be here if not for someone who touched us on the shoulder and pointed us in the right direction. It’s rewarding to be here.”

“The players come from different backgrounds – wealthy or not, everyone has issues. If we can help those kids in high school, then that’s why I’m here.”

“I think football is the best sport,” Tysen said. “It develops so many good qualities – leadership, camaraderie and the respect you develop through the game. It’s not all about winning. It’s about becoming a better person.”

Marinelli agreed, adding, “Not everyone gets the opportunity to play, score touch downs, and what you see on TV. The parents, supporters and fans only see game day, but there’s the camaraderie and the discipline necessary to get to game day. It’s the whole journey that starts in January. It’s a journey we take together.”

The National Strength and Conditioning Association is an international nonprofit professional association founded in 1978 and is dedicated to advancing the strength and conditioning profession around the world.