On Tuesday night (Jan 7) the Planning & Zoning commission will hear an application for a preliminary site plan and special permit from Fried and Taylor LLC for a development at 100 East Putnam Ave in Cos Cob, the former Friendly’s Restaurant building.

The applicant proposes a mixed-use, moderate income housing development of three stories including 22 units, with five of them (20%) being moderate or “workforce” housing as per section 6-110 (a local zoning program). 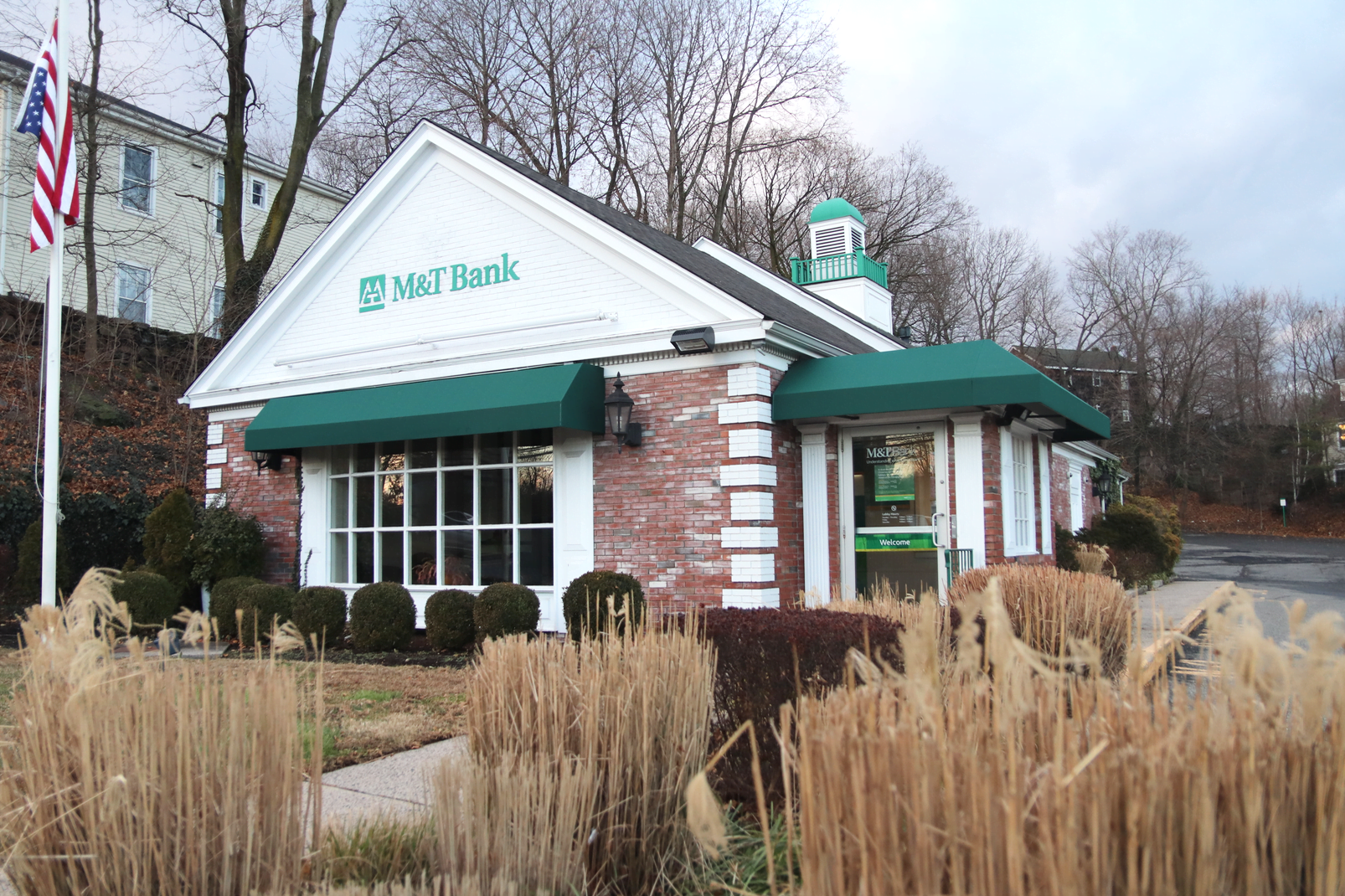 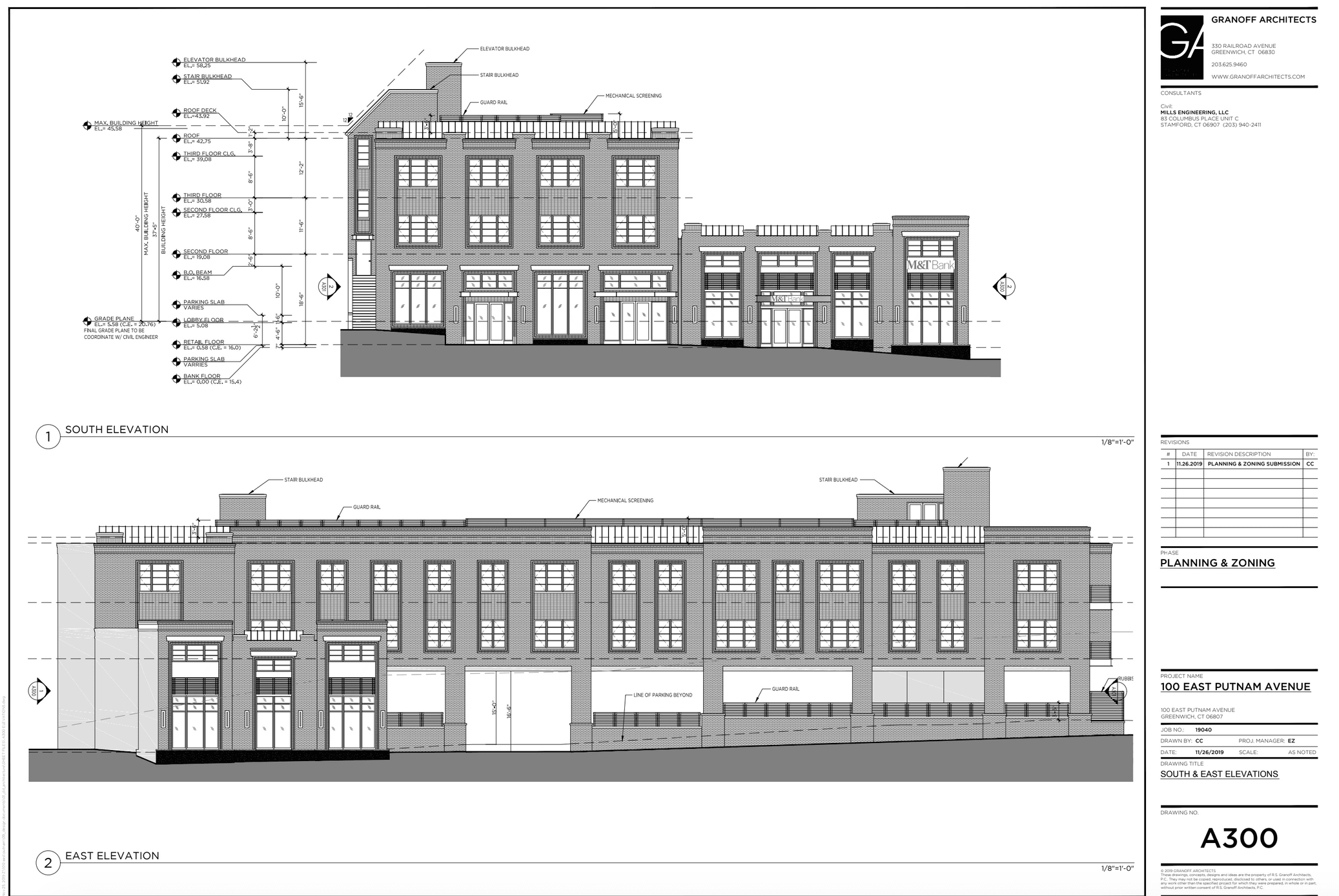 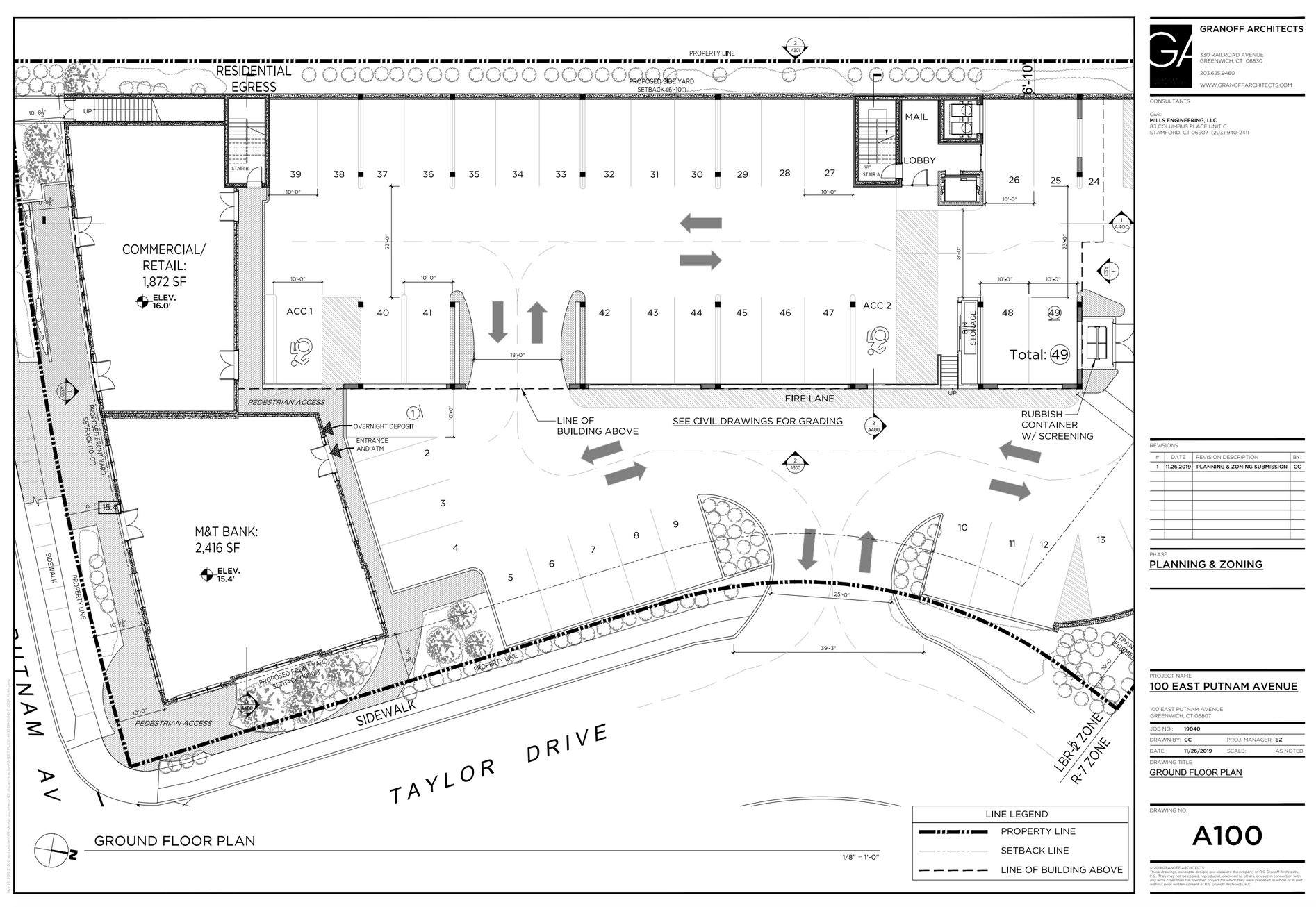 Currently there is a moratorium on 6-110 applications, but this was submitted prior to the moratorium.

The applicant seeks 4,288 sq ft of commercial space with two tenants on the first floor.

M&T Bank currently operates at the former Friendly’s, which would be demolished. They would like to move into the new space.

At the Monday P&Z staff meeting, the item was discussed.

The applicant seeks to have commercial use on the first floor along East Putnam Ave, where they would close the driveway and limit access via Taylor Drive, which most people consider the entrance to CVS.

Currently, while few cars exit from Taylor Drive onto East Putnam Ave, there is a fairly long wait for the green light (there is no right on red), and drivers cut through the bank parking lot to turn right onto Putnam Ave.

The applicant met with Town departments in October. There was discussion of creating three lanes exiting Taylor Drive and including a right turn only lane.

P&Z staff said the traffic lights are synchronized along East Putnam Ave and that a change would involve the State.

The site is in the LBR2 zone, which is a different zone from the proposed 20 unit development submitted under 6-110 at 1205 East Putnam Ave. That proposed building, which the commissioners referred to as “The McDonald’s building,” is in the Local Business (LB) zone.

The former Friendly’s building is in the LBR2 zone where above ground parking structures are not allowed. The commission will need to interpret whether proposed parking at ground level is a “parking structure.”

“The quickest way to reduce bulk is to dig down,” said Mr. Hardman referring to underground parking.

“The pond is right across the street and in the flood zone. You don’t know where the water wants to go,” LaRow said.

The proposed parking would all be enclosed at the rear of the building, on the side against the hill (west).

Also, 6-110 refers to residential uses, but the proposal is for a mixed use building.

The idea is that after the bank and the other retail store close, those spots will be available to tenants.

There was some question as to whether the incentives for setbacks apply because the proposal is for mixed use rather than purely residential.

In front, the applicant seeks to maintain the existing non-conforming setback and decrease the setback to the west. In fact they intend to cut into the hill to the west.

Commissioner Nick Macri said in its position relative to the street, with three stories, “It’ll loom on the street.”

“It seems the intent of 6-110 is greater setbacks for residential,” said assistant town planner Patrick LaRow.

There is a proposed 6 ft 8” setback on the west side of the property. Currently there is a 30 ft setback.

“This building will cut into the hill and move into the hill,” LaRow said, adding that P&Z had yet to receive letters from residents, who include residential neighbors in the R7 zone.

LaRow noted the proposed building is the same height as the building at 122 East Putnam, home to CVS.

The commissioners noted that residents are on record as not liking the CVS building, but its size reflects that the property is vast and features several one story buildings including the ones that house the Post Office, Fjord Fishery and Fleishers. 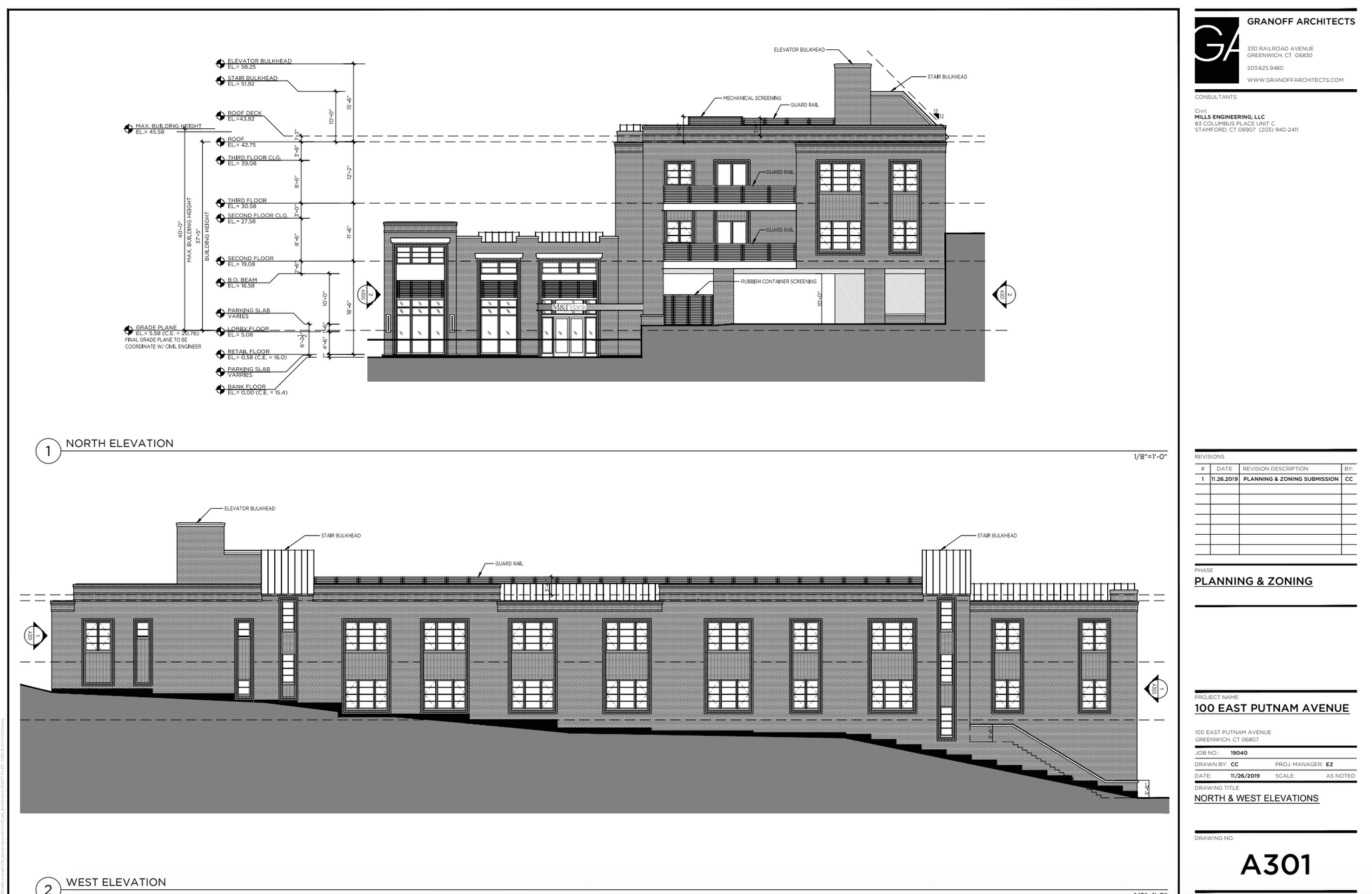 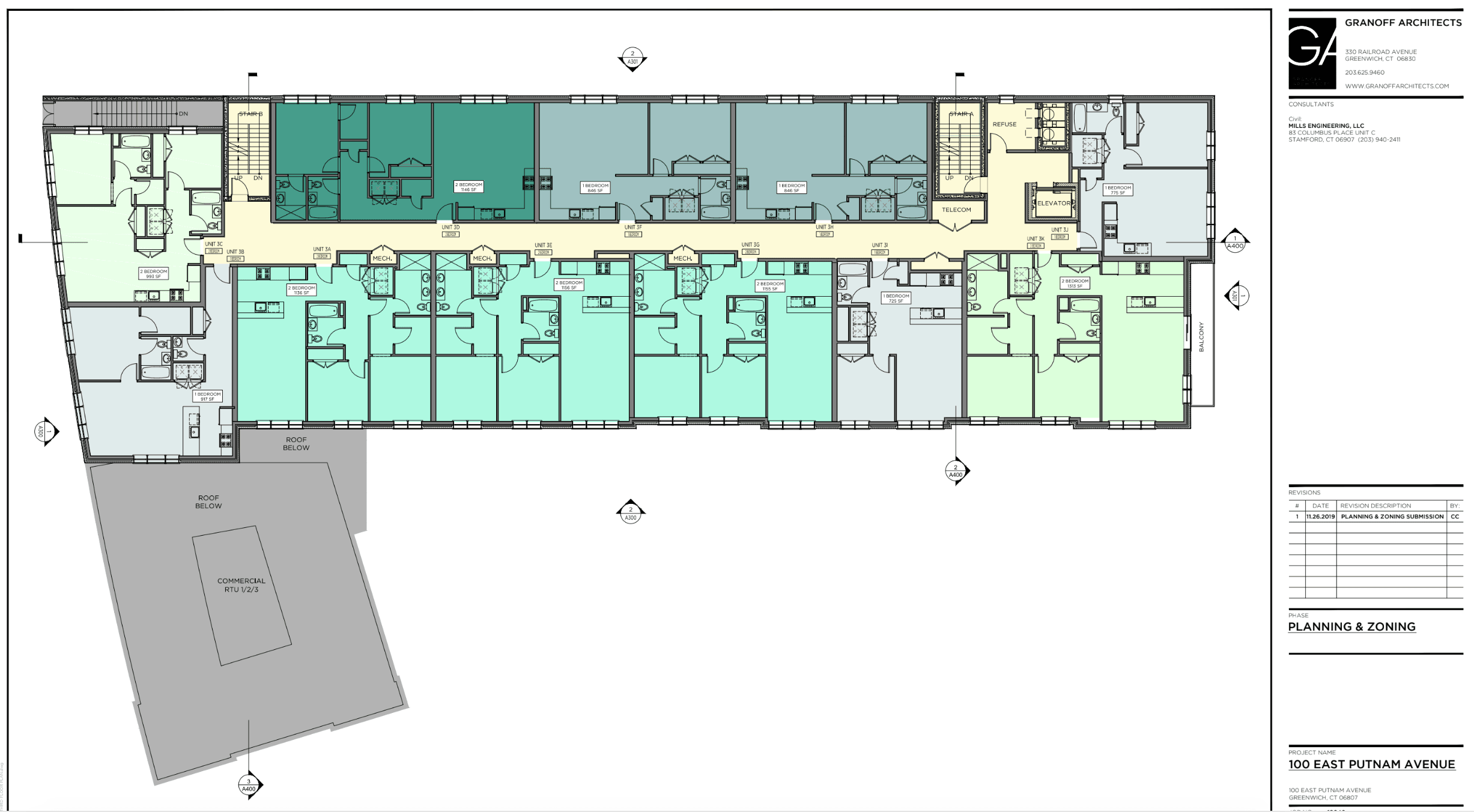 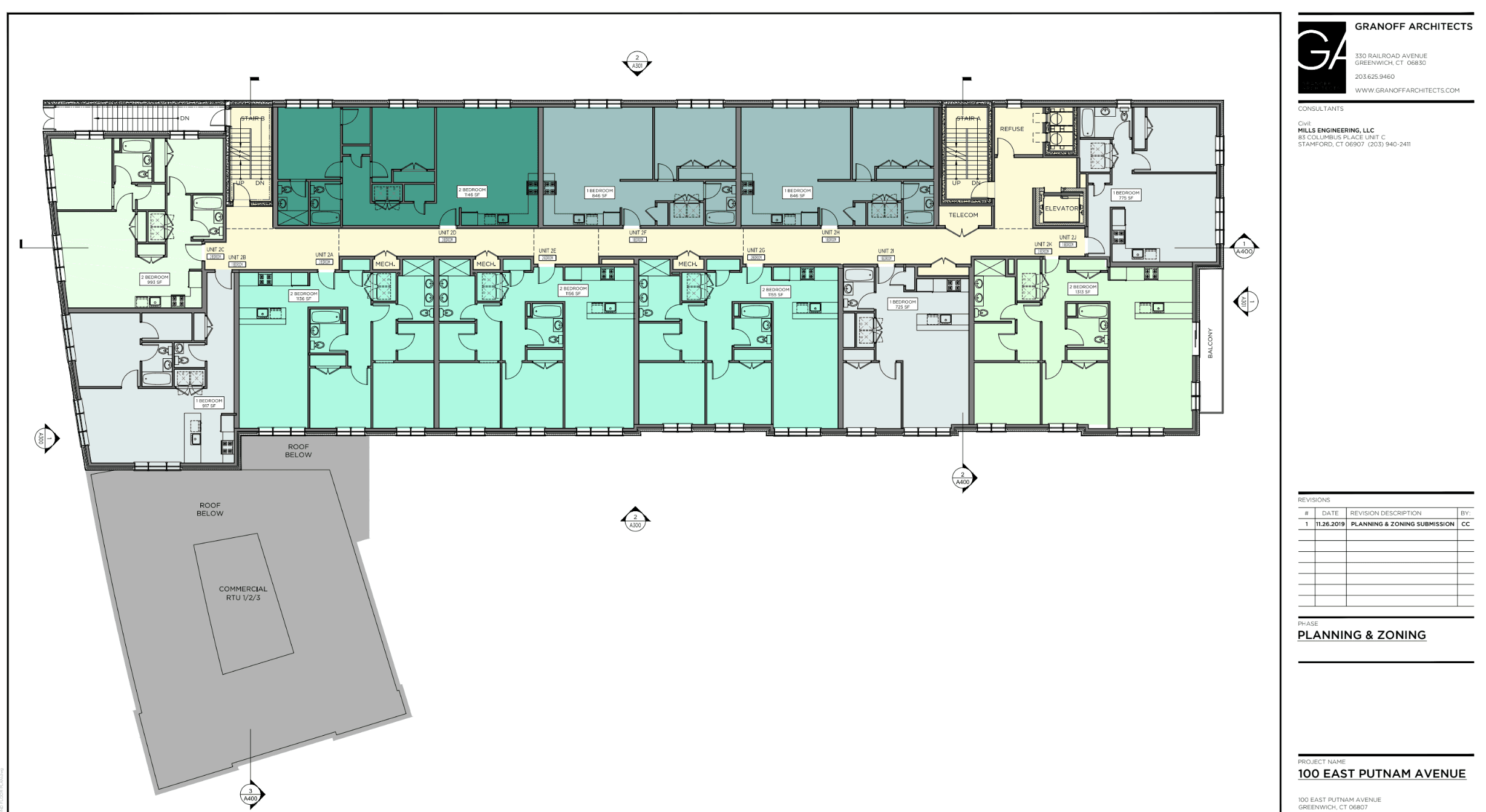 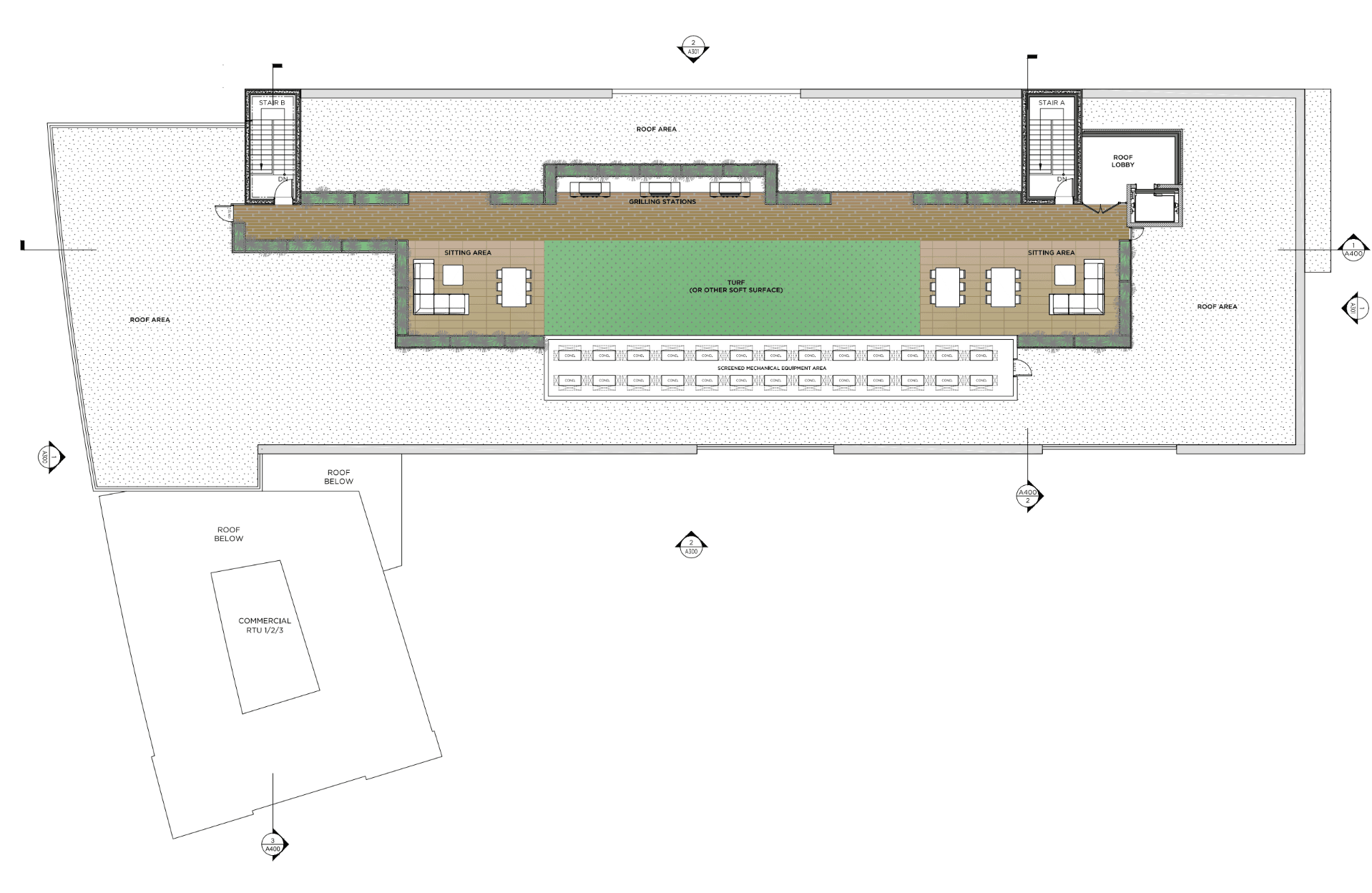 “It’s three full stories,” Mr. Macri said. “CVS breaks in the third story and moves back. This is straight up.” Macri added that because the west side of the property goes up hill, it will feel even taller than the CVS building.

The only other building of this size in downtown Cos Cob is the fire house.

“When the supermarket (Poricelli’s) burned down, how did they get (permission for) that size building?” Mr. Yeskey asked about the CVS building. “People have complained about the size of that building and this is even bigger.”

Mr. LaRow explained that the LBR Zone is more generous, and the property includes a great deal of land behind CVS that extends all the way to Sinawoy, behind the one story buildings that house Fleishers, Fjord and the post office.

“This building is not physically bigger. It’s more imposing because of the elevation,” Macri said.

The proposed building would be L-shaped. The front would have a one story bank and a retail establishment. The residential would rise higher.

Staff noted that the conservation department had suggested including electric vehicle chargers, which would tie into the POCD’s emphasis on sustainability.

Mr. LaRow brought up the topic of blasting into the hill, wondering how that would impact ground water. “Would it increase downstream flooding?” he asked.

As for parking, without retail, the building would be required to provide 22 more parking spaces.

“The regulations afford mixed use to take a reduction (in required parking) for residential above commercial. It appears they’re providing enough parking for commercial spaces, plus one space per unit,” LaRow said. “There is a reciprocal agreement for shared parking.”

There is also a bus stop out front and the Cos cob train station is a half mile walk away.

In discussion about green space, or recreational space, the commissioners noted that there are parks in walking distance. Loughlin Park,which features a playground, is a short distance away. 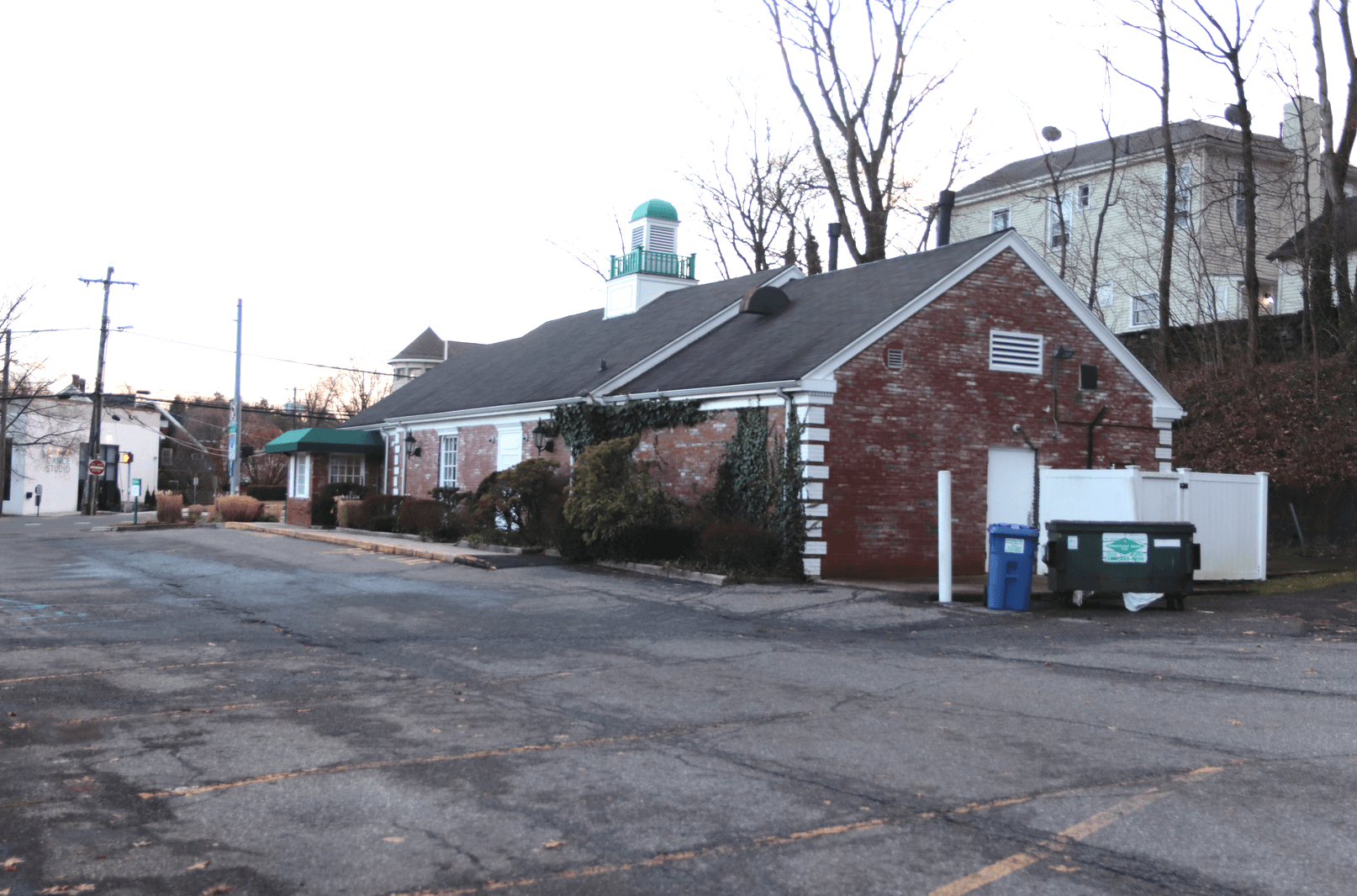