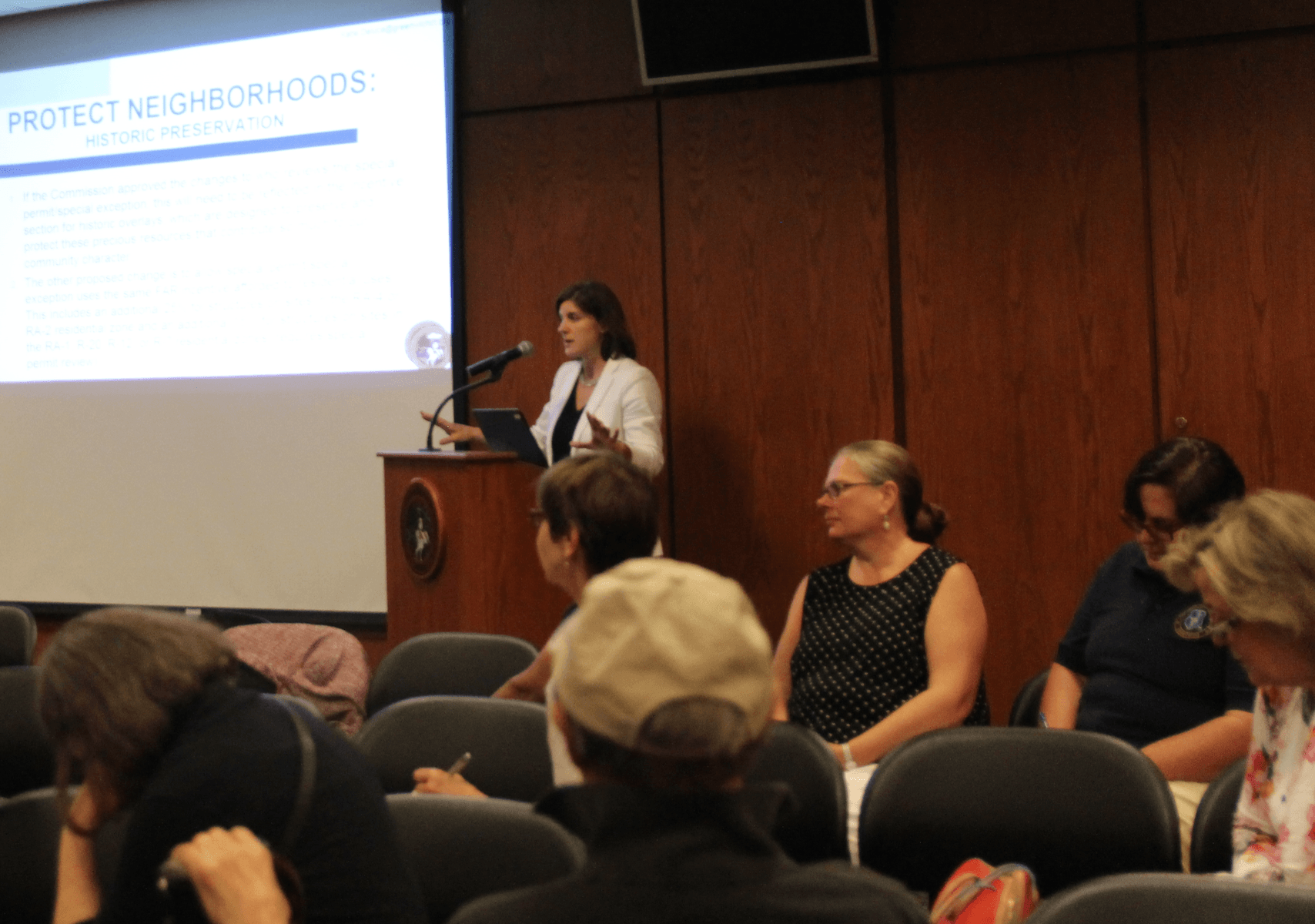 P&Z director Katie DeLuca at the July 12, 2018 Board of Selectmen Hearing where she explained a series of proposed text amendments.

On Friday afternoon Planning & Zoning Director Katie DeLuca issued a statement announcing that the proposed text amendment that would potentially allow public and private schools in residential zones a 30% bump in Floor Area Ratio (FAR) had been withdrawn.

“Given both the timing and the strong sentiment expressed on both sides of the issue, the text amendment regarding FAR increase for educational institutions in residential zones has been withdrawn,” DeLuca wrote in an email to local media.

The amendment, had it gone through, would have given relief to schools that are maxed out on their FAR, including Greenwich Academy who have been purchasing adjacent homes to their campus in order to expand their FAR.

DeLuca noted as recently as Thursday at the Board of Selectmen meeting that given existing regulations, Greenwich High School cannot even add a garden shed.

Without the 30% bump the proposed facilities upgrades at GHS, including new a new building at Cardinal Stadium are off the table.

A proposed two story building at Cardinal Stadium would have brought long overdue toilet facilities, team rooms, weight rooms, concession, and ticket office, and increase access for teams and spectators. The second story would have housed the weight rooms and include a deck ideal for viewing.

DeLuca wrote that having top schools, preserving community character and enhancing neighborhoods should not be mutually exclusive goals.

“The public hearing process is how the community at large works together to ensure that the right balance is struck,” she wrote.

The Selectmen began pressing P&Z on the merits of the amendment last month. At their June 14 meeting, the Selectmen said they’d met with community members who had asked them to intervene. They agreed to pen a letter to P&Z asking them to delay the July 11 hearing until October.

DeLuca responded with a compromise, and the item was set to be on the July 24 agenda.

This week, at their July 12 meeting, the Selectmen beseeched DeLuca to have the commission delay the item until October.

During the meeting, they publicly consulted attorney John Wetmore about protocol for a lawsuit.

Though the amendment was noticed back in May, on June 12, residents were caught unawares about the text amendment, and at a P&Z meeting, several residents expressed opposition.

Leslie Tarkington spoke at length against the amendment. The longtime resident and BET member, she said an increase in FAR for schools would impact residents’ quality of life, diminish neighborhoods’ value to the town’s grand list and have a major impact on land values in town. She said the amendment was “a give away” to private schools and even suggested that the change was de facto spot zoning.

While neighbors of Greenwich Academy spoke against the amendment, GA parents and staff testified in favor of it. The file at P&Z contains several letters of support from that school community.

The text amendment was just one part of 32 pages that outline proposed amendments.

The remainder of the text amendments will be further considered at the July 24 Public Hearing at 7:15 in the Town Hall Meeting Room.

“Those interested in this topic are encouraged to continue to work with planning staff during the upcoming months so that a mutually agreeable proposal can be put forth to the Commission for consideration in the future,” DeLuca wrote on Friday afternoon.