On Wednesday night the Historic District Commission entertained a proposal for a certificate of appropriateness to preserve the front portion of the Armory at the corner of Mason St and Havemeyer Place and build a synagogue.

Currently the site features the historic Armory, a parking lot that supports the Armory and Fawcett Center down the block, and what is referred to as the “drill shed.” 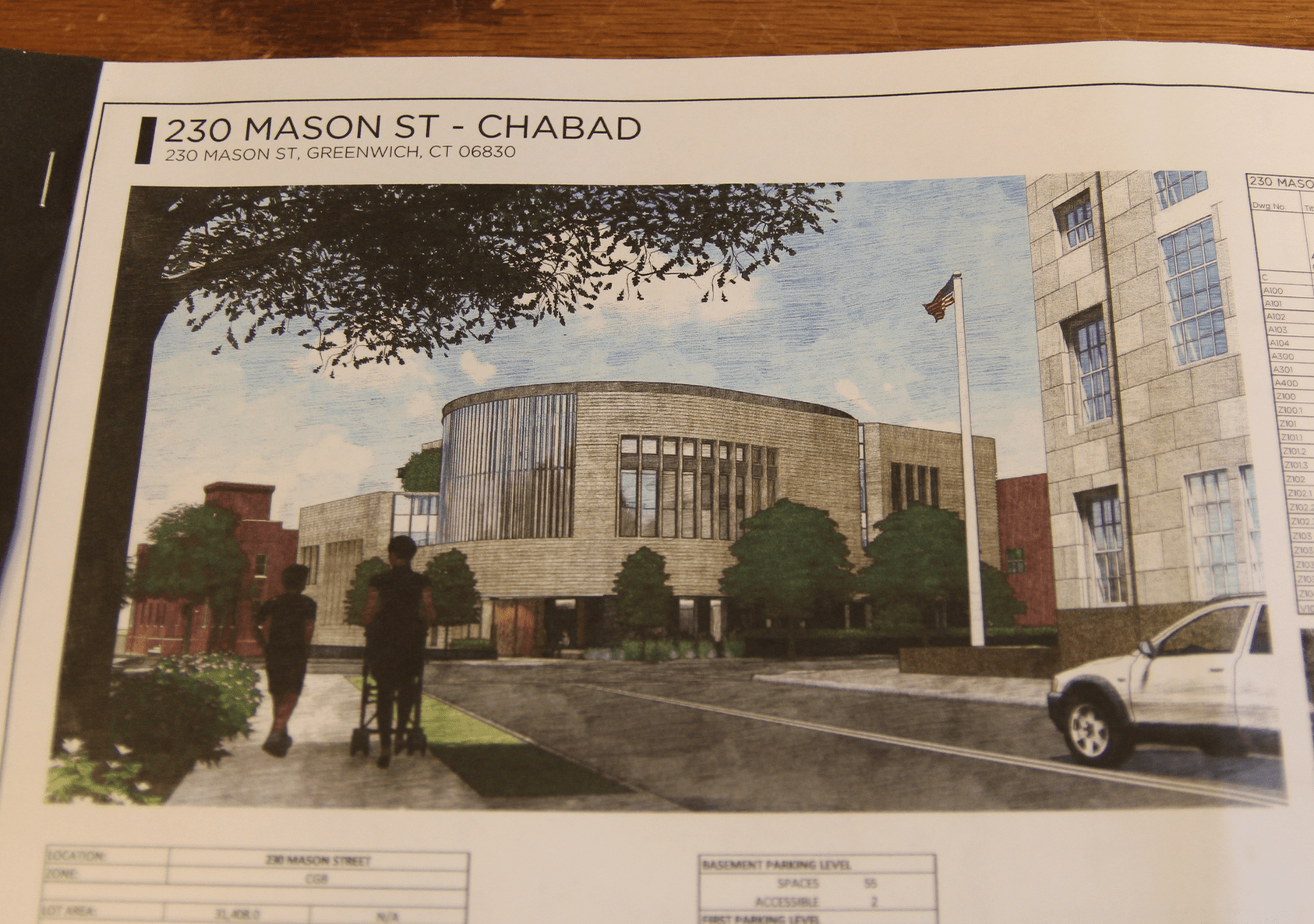 Rendering of proposed synagogue for Chabad Lubavitch at corner of Mason St and Havemeyer. (Note Public Safety Complex to the right, and Armory in distance). 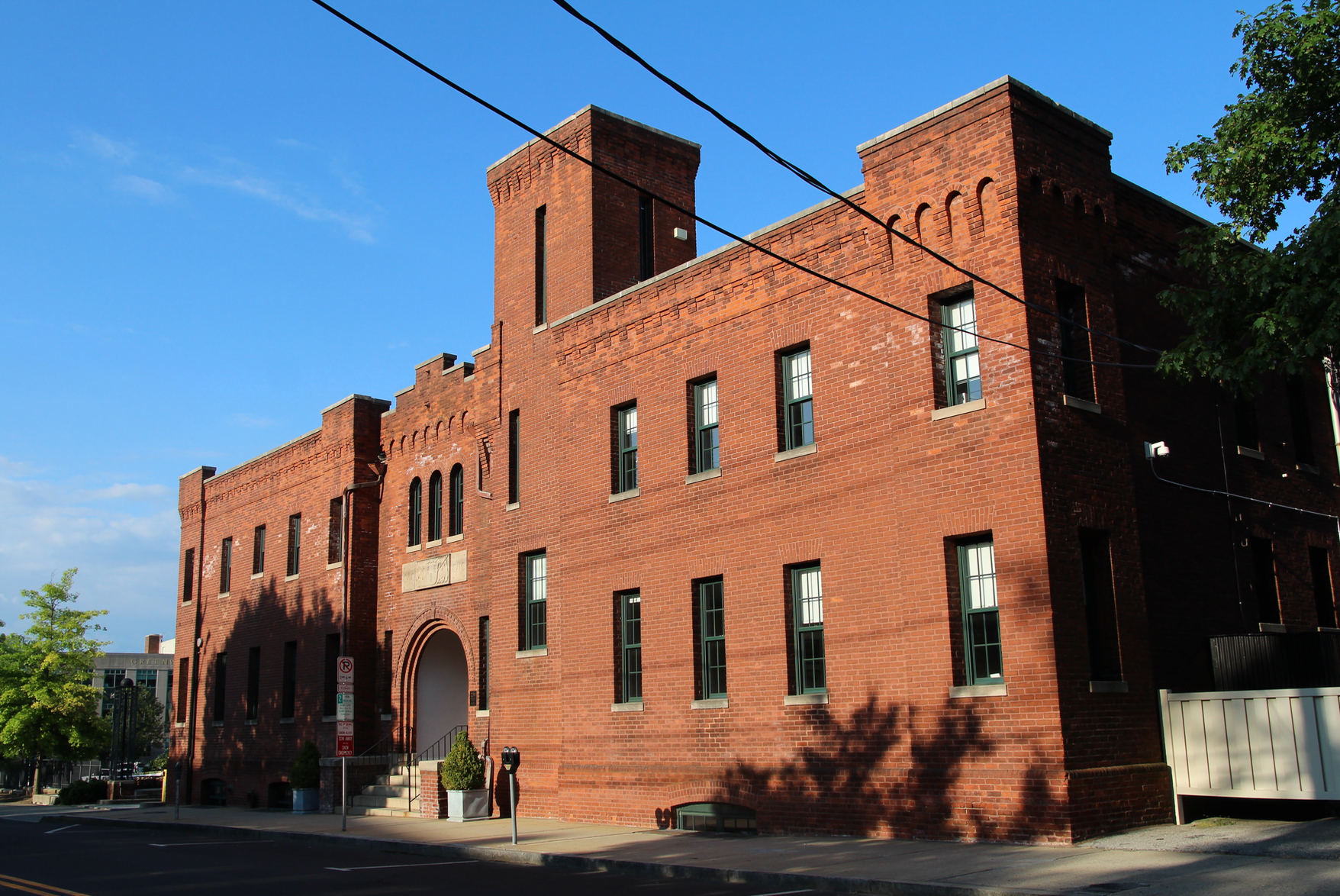 Built in 1911, the Armory building at the corner of Mason Street and Havemeyer contains 24,000 sq ft. It remained an active military facility until 1971 before it was decommissioned. In 2012, HB Nitkin Group moved its headquarters to the Armory. Photo: Leslie Yager

The proposed building is a four story, mixed-use facility. In addition to a synagogue, it would include a preschool and offices.

The applicants, represented by attorney Thomas Heagney and architect Richard Granoff, said Nitkin has gone to contract with Chabad Lubavich.

Rabbi Yossi Deren and his wife Maryashie were also present.

As of Thursday morning, no transaction had been recorded in the Assessor’s office at Greenwich Town Hall. 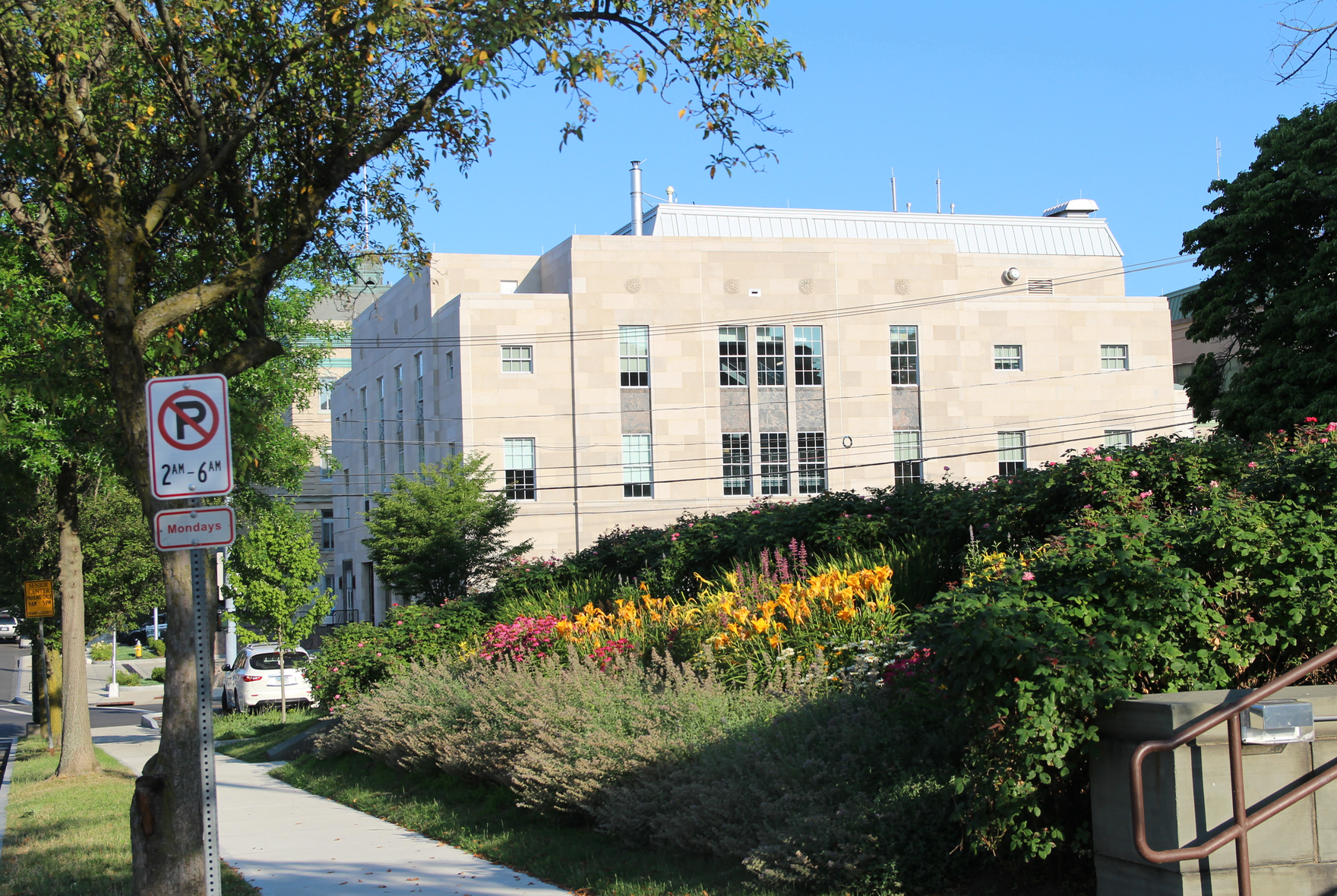 The Fire House in the Public Safety Complex was rebuilt in its original Art Deco style reusing some of its original limestone and fixtures. Photo: Leslie Yager

Granoff described the site as important because it is surrounded by important works of architecture, most of them freestanding, which is uncommon.

Adjacent and nearby buildings include the Art Deco fire station and the Havemeyer building, which is home to the Board of Education. That building was constructed in the Classical Revival style and was originally Greenwich High School. 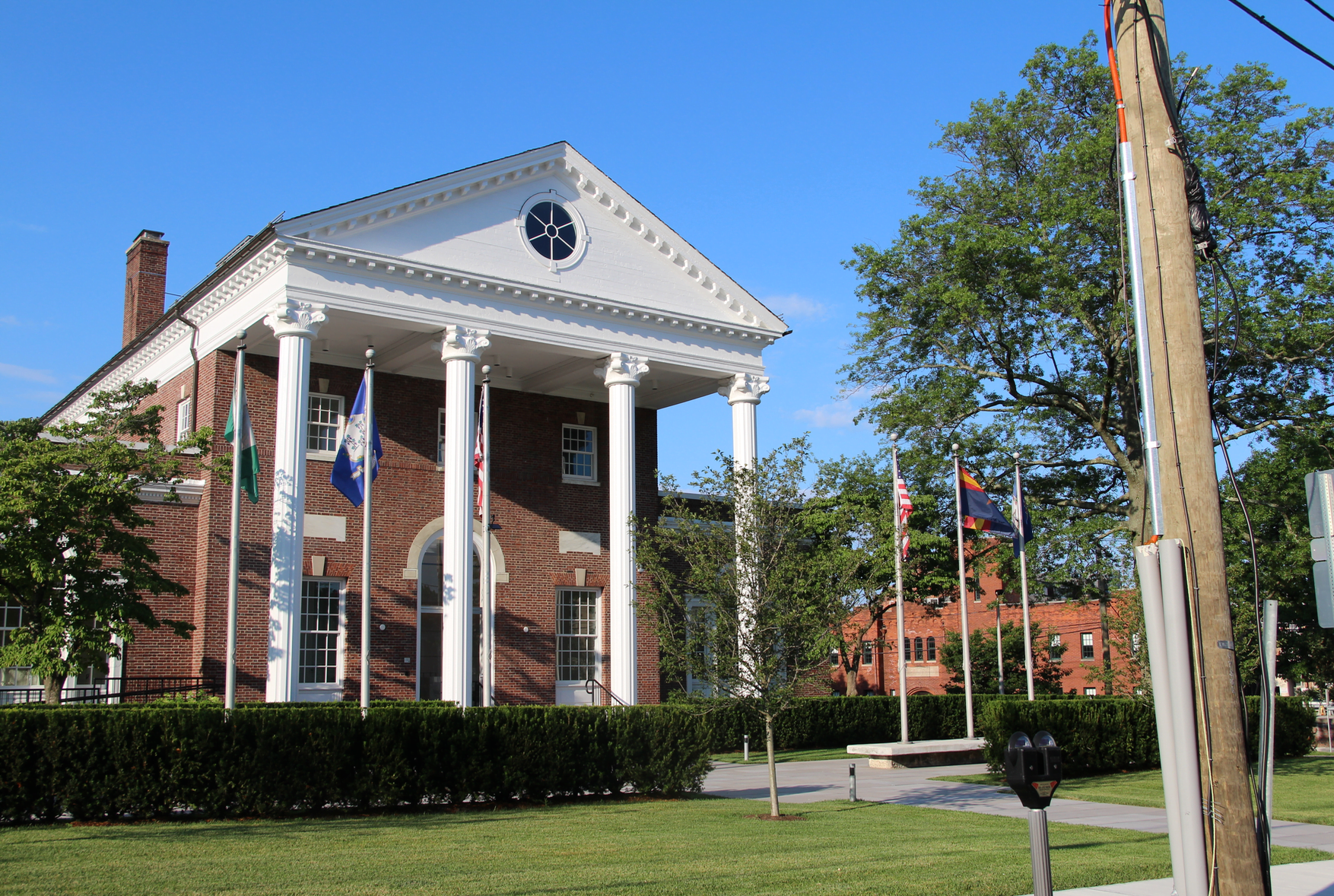 Most recently home to Wells Fargo, this was originally constructed as a Masonic Temple in 1922. Photo: Leslie Yager

Opposite on Havemeyer is the building known as the Greenwich Federal Savings building, which was built in 1922 as a Masonic Temple also in Classical Revival style.

Two doors down is Richards, was built in 2000 in a style Granoff described as a modern interpretation of a traditional building.

Also adjacent is the Weber Gallery, which Granoff said was originally a fire house. He said he served as architect when that building was renovated a few years ago.

“All this adds up to a very important site surrounded by important works of architecture, each in a different style from a different era,” Granoff said. 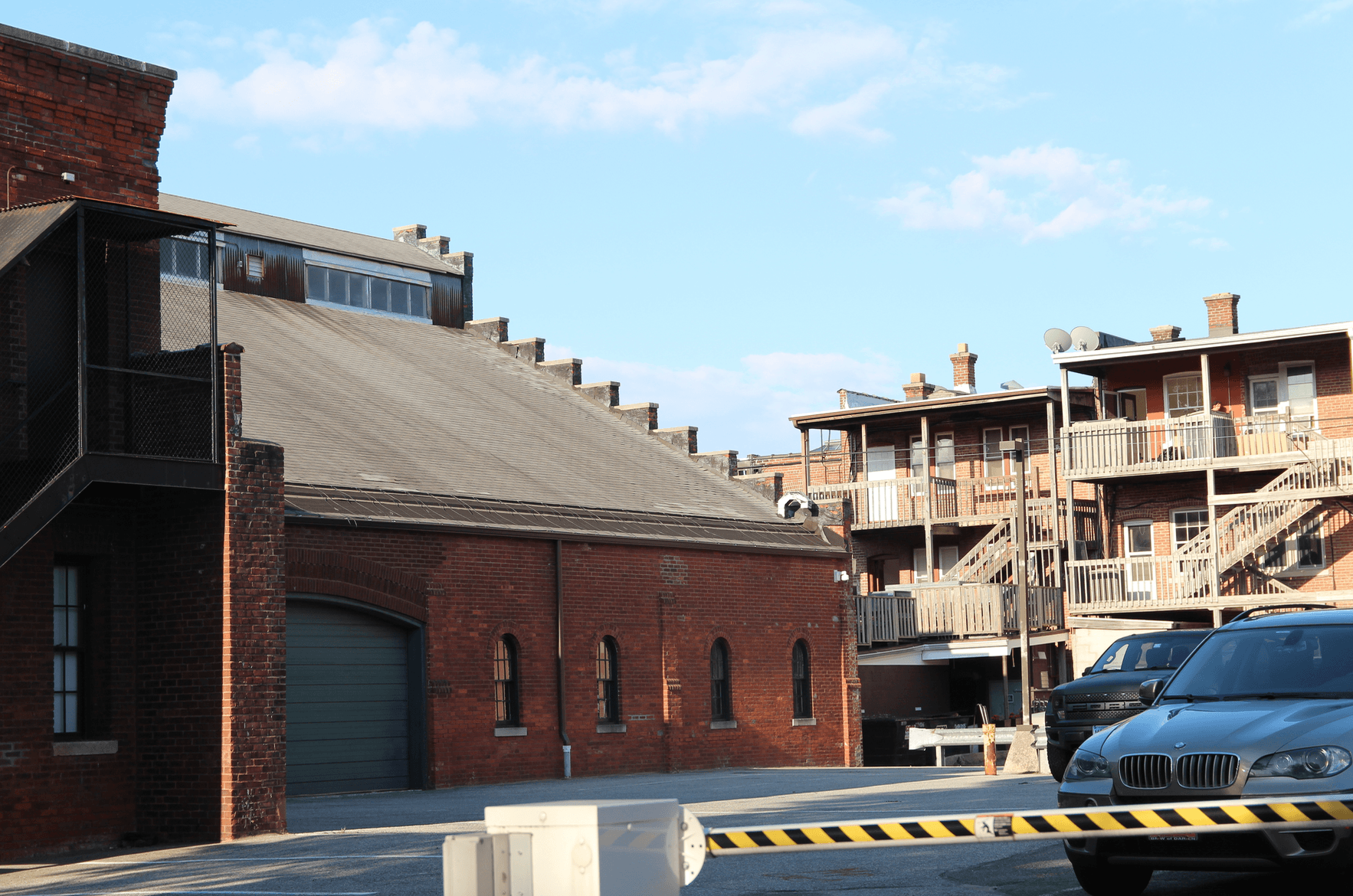 Behind the Armory is what applicants described as a “shed.” They said they’d preserve the shed’s brick wall. Photo: Leslie Yager

While the Armory would be preserved, they intend to demolish much of drill shed which is three times it size, with the exception of one of its exterior brick walls.

Granoff said to the south, Richards has agreed to let his clients use their ramp down to access their parking structure, which would not be visible as it would be buried in the back.

Granoff said it would require great care and expense to  preserve the Armory, keep the wall  in tact, and excavate around it.

He said it would cost $4 million to excavate the site, build the parking structure and preserve the Armory. 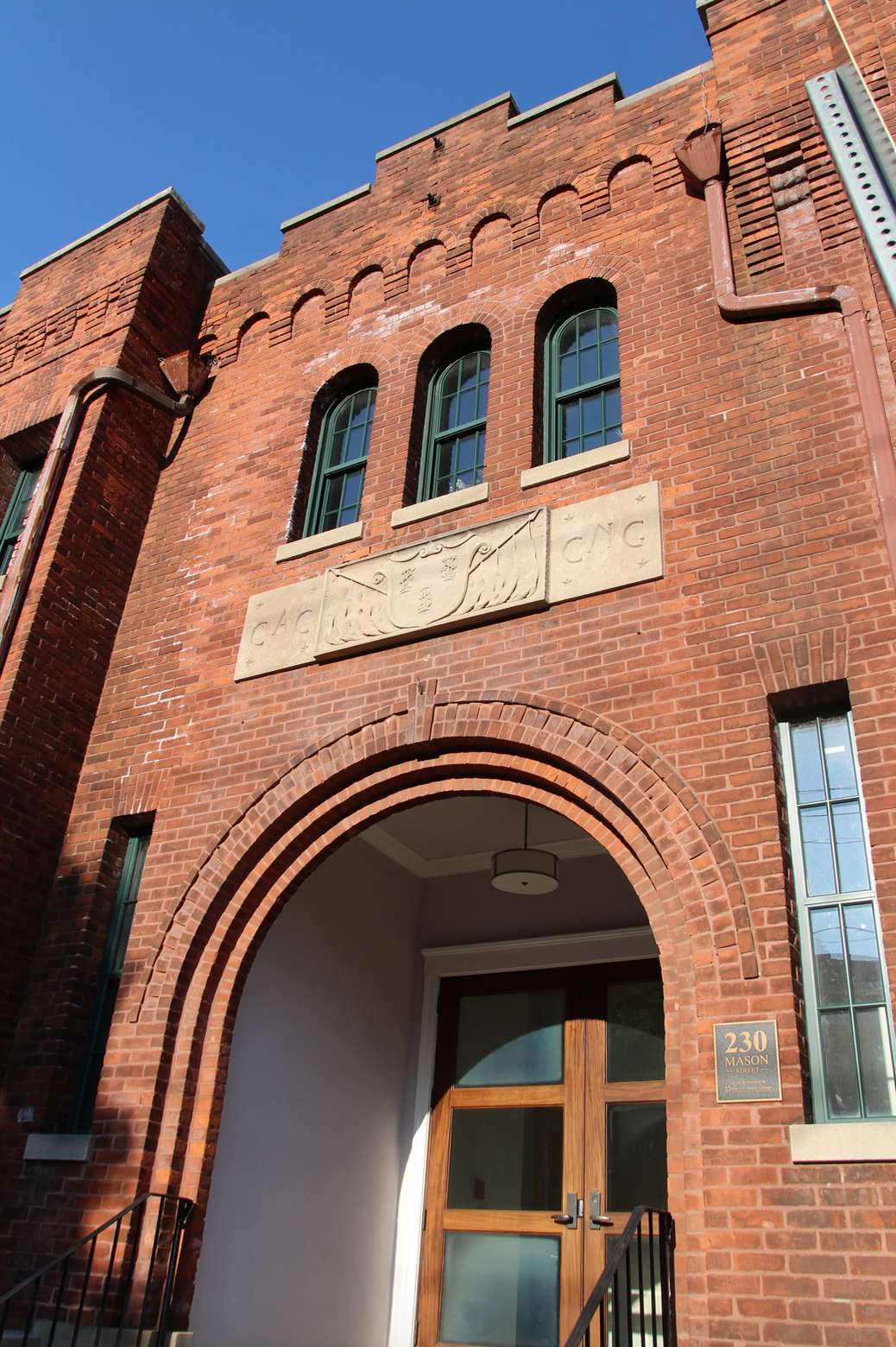 Facade of the Armory at 230 Mason Street, which would be preserved. Photo: Leslie Yager

Granoff said the proposed 3 story building would comply with a 40 ft height requirement and have some rooftop play area to support the preschool, as well as green space along Havemeyer Place.

The applicants, represented by Thomas Heagney, in addition to Granoff, said Nitkin has gone to contract with Chabad Lubavich. The Assessor’s office said there was no record of a transaction as of Thursday morning.

Granoff pushed back, saying, all the buildings in the area are very different, and the idea was to relate to the scale of the Armory, not to create a symmetrical building. 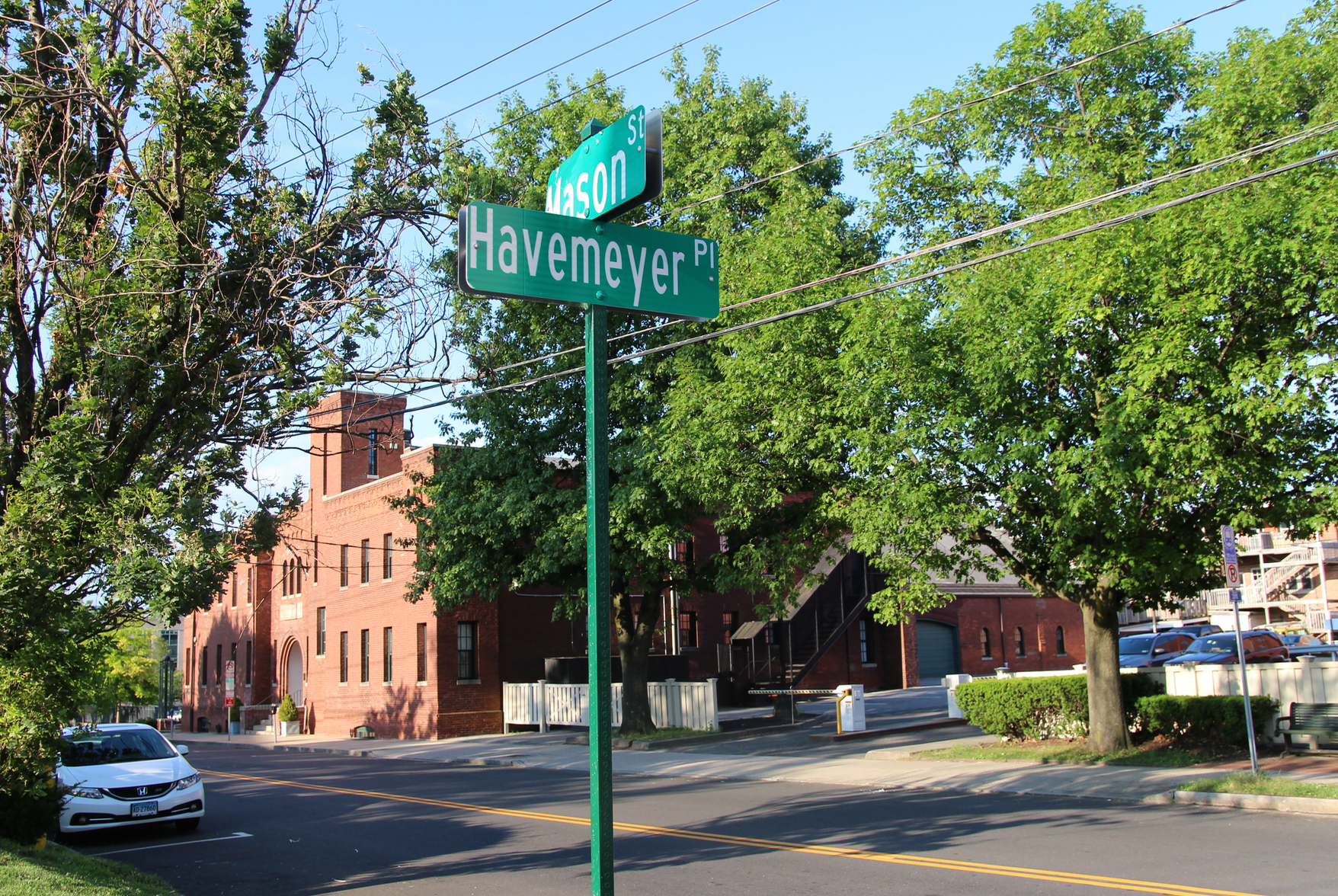 “We’re obviously not trying to match the Armory. A Historic Overlay is not to match what’s there,” he said.

Mr. Toraby asked why the proposed building takes a different angle than all the other buildings on Havemeyer.

“You have a round oval shape building introduced on the corner with a two story high glass wall,” Toraby said.

“I feel something different should be considered,” Toraby said, adding that the proposed building is not respectful to its surrounds. “Everything else hangs together beautifully, and this building becomes an anomaly.”

“It’s massive and doesn’t relate to the other architecture,” Toraby said.

“I feel the same way,” Mr. Bishop said. “It’s an anomaly and it just doesn’t work for me.” 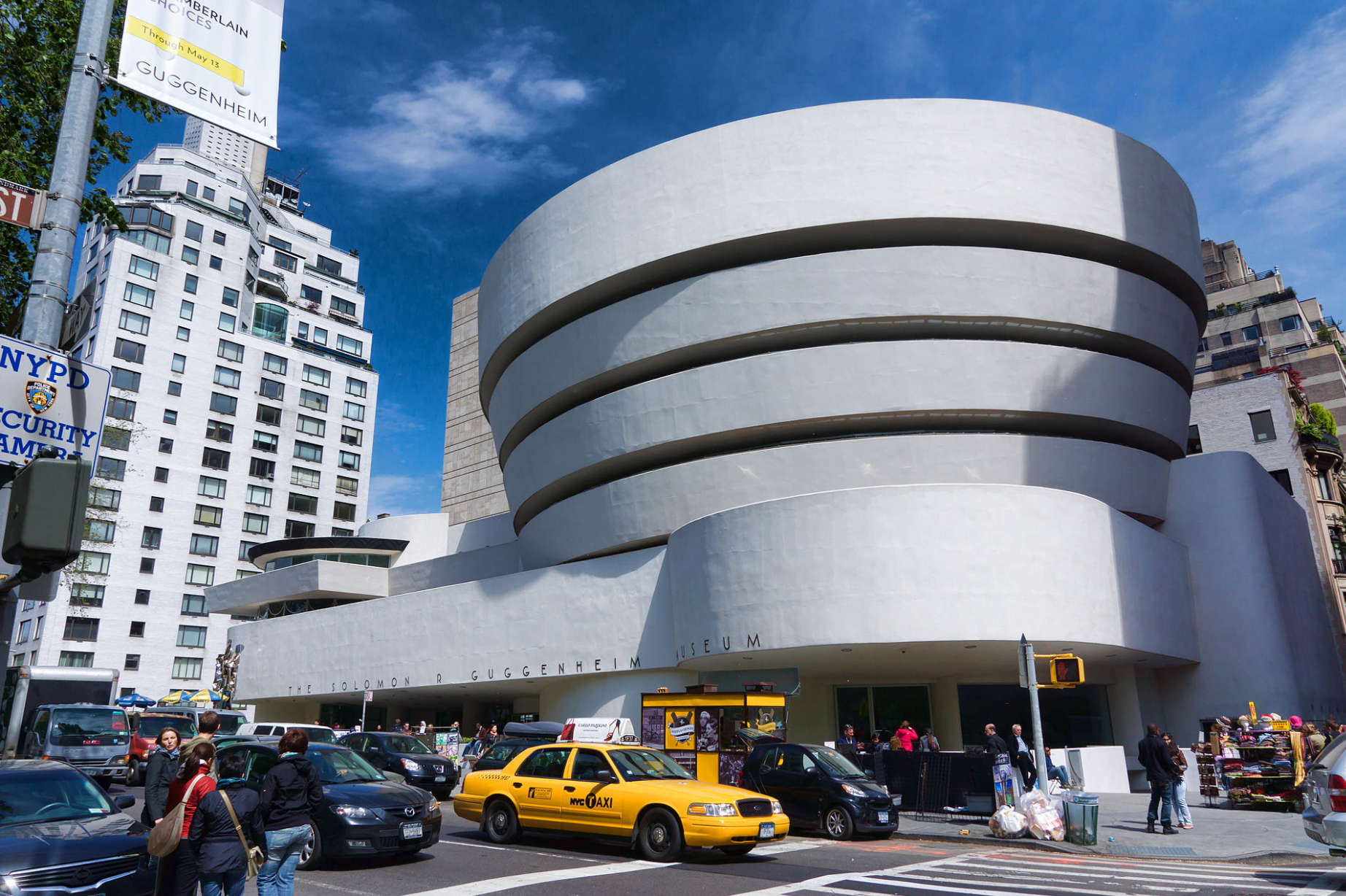 The proposed synagogue at 230 Mason Street was compared by the HDC to the Guggenheim Museum in New York.

HDC member Marie Williams said that given the use of Jerusalem stone, her first impression of the proposed building was that it looked like the Guggenheim Museum.

“Do your clients have comments?” Ms. Williams asked. “This is a spiritual statement in the heart of Greenwich, in an old somewhat staid town that’s trying to move itself forward while maintaining its historical fabric. I’d like to hear from your clients.”

Rabbi Yossi Deren said the initial concept had been for an all-glass oval, but the idea had evolved while being discussed by Chabad’s building committee.

“Basically it was the Guggenheim on steroids,” he said of the original concept. “But we wanted it to be more traditional and in line with the neighborhood.”

The Rabbi’s wife, Maryashie Deren, talked about morals and values, arguing that Chabad’s activities attract many people who are not Jewish.

She said that while searching for space to lease for Chabad’s preschool, several pastors and priests from other churches asked her how Chabad attracted so many young families, and complained that young people are ‘wrapped up on their phones and technology, and not showing up.’

Mrs. Deren said young people do come to Torah classes to learn morals and values that they can bring back to their homes.

“Our children have not been following the trends of tech and what’s going on today,” she said, adding that she and Rabbi Deren have 10 children.

“On Saturday it’s full to capacity with young families with children,” she said of the Chabad’s existing synagogue on the corner of Mason Street and Lincoln Avenue.

“People want to learn how to incorporate this in their own families. The thought of a more traditional-modern building invites different people to come in. …It’s not a religious building of the past.”

HDC’s Fifi Sheridan said the area is on the National Register of Historic Places.

“Enough people in Greenwich thought it was so significant that it needed to be protected,” Sheridan said. “Your design might work perfectly in an area that is not a designated historic district. I agree this is not the appropriate place for this design.”

“Starbucks, around the corner, is a traditional building and is a great draw for young people,” Sheridan said. “So is the Apple building, and we worked with them to make it a welcoming and inviting place.”

Ms. Smith said she found the proposed building ‘fortress like.’

“I even like the idea of an entrance on the corner, but, personally, this is not drawing me in. …you’d be just as happy if the Armory wasn’t there. I don’t feel there is a shaking hands relationship.”

As for demolishing the shed, Mr. Bishop said the HDC likes the existing shed.

Mr. Bishop warned Mr. Granoff and attorney Thomas Heagney that the process would be long.

The HDC does not meet in August. Their next meeting is September 12.

The Historic District Commission is also asked to provide an advisory opinion to Planning & Zoning.