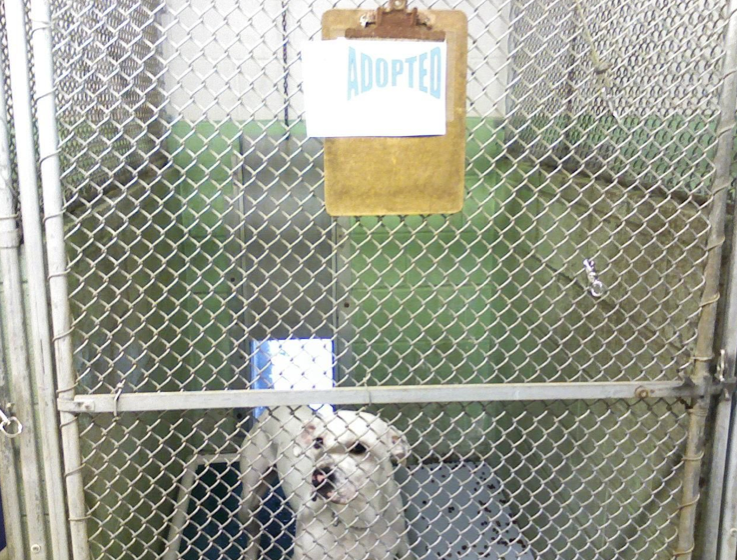 “Cappy” at Stamford Animal Care & Control with an “Adopted” sign on his cage. Contributed photo

I am writing to tell you about a very special part of your city. I am speaking of Stamford Animal Care & Control, its director Laurie Hollywood, and the remarkable group of volunteers who have served the animals since Ms. Hollywood turned that place from a dumping ground to a place of hope and compassion.

I am writing in support of Laurie and to ask that you envision SACC not as budget item that nobody really cares about, to the idea that a great many of us care about SACC and the positive reflection it could have on Stamford.

I lived in Stamford for almost 20 years, I worked across from the pound when it was the pound, endured the smells of the treatment plant on hot summer days and never thought about what was happening to any animal that entered that small cinder block jail. Years later a friend brought me to volunteer and walk dogs. I said I didn’t even know one could volunteer to do that? It was then that I met an incredible group of people. This was many years ago, I think the town had a few paid animal control officers — nowhere even close to what was needed unless the goal was to simply pick up and gas whatever was dropped off. But that was not the goal. The goal was to add the word “care” to animal control. Walk the dogs, give them human interaction, train them, socialize, all of which made them more adoptable. I am guessing that over the years Laurie and OPIN have adopted out at least a thousand dogs that became part of loving families.

When we moved out of our apartment in Stamford and were able to buy a home in Norwalk we returned to Stamford to adopt one of the dogs. A little background on my dog, it was turned into the Stamford shelter by the family of drug addict who had horribly neglected the dog. It was thin, had badly hurt his teeth chewing on a fence that he was locked into while the owner zoned out. Laurie gave my dog a chance and with the help of volunteers and a greatly underpaid vet my dog made it back to the shelter and not the gas chamber. Months later he regained most of his weight and thankfully was available for adoption when we bought our home and has been a member and chief comedian of our family for the last 61/2 years.

I am not expecting you to appreciate this nor am I trying to persuade you to become a dog person, nor will I claim that Gandhi wrote, “You can judge a citizenry by the way they treat their dogs” to tug at your heartstrings. However I am afraid you are missing a very big chance to push for the right thing. SACC and OPIN are TV worthy — this is the real deal. Real citizens that really care and give up immense amounts of their time, energy, and love to give neglected animals a chance.

Regrettably whatever this latest incident is — it is being perceived by many as political witch hunt perfectly timed to avoid building a new shelter. It would be very easy return the old days, “drop off a dog, nobody claimed it, kill it” but that surely says nothing positive about Stamford. On the other hand, why not promote and even support the reputation Stamford has earned under Laurie and the incredible volunteers at OPIN? The fact that Stamford already has the rare humanity and community spirit is a positive in the city’s balance sheet and should be praised and promoted, not neglected and held in suspicion.