“My husband and I were walking into a wedding in Florida and I said, my goodness, could Ladybug have gotten out, because it looked just like her. Side by side they looked like twins,” Kangas said.

Fearing her precious Ladybug had escaped and wound up on Magee Ave in Stamford, Kangas called her friend Allyson Halm at New Canaan Animal Control to ask her to look into it.

“I said, ‘Please tell me it isn’t Ladybug,'” Kangas recalled.

Halm told Kangas that no, it was not Ladybug, but rather a dog they were calling ‘Benny,’ and that the dog had no collar or microchip.

“I’ve always had big dogs,” Kangas said. “I’ve had a St Bernard, and a huge Burnese Mountain mix. I always take the dogs no one else will take, including when there are a pair of dogs who are bonded and need to stay together.” 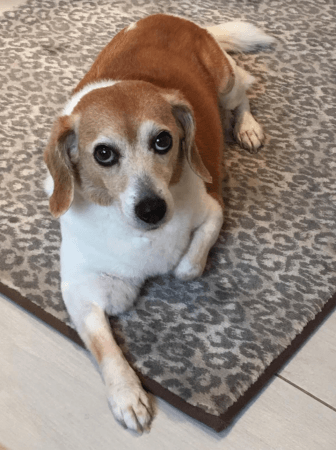 When Cathy Kangas learned no one picked Ladybug during the New Canaan Dog Days of Summer event in 2016, she adopted her.

A couple years earlier, at that Dog Days of Summer event, where she spotted Ladybug dressed in a little jacket that said “Adopt me,’ her husband reminded her she wasn’t a little dog person.

“My husband said, ‘No, we have giant dogs.’ But, she was there all afternoon, and at the end of the day, I found out nobody had taken her.”

Ladybug joined the Kangas family’s big dogs without a hitch, bringing the dog tally to four.

“I told Allyson in New Canaan, ‘Hey if nobody claims him, I’ll take him,'” Kangas said.

She called Stamford Animal Control, filled out the paperwork, and drove to the shelter to pick up Benny. “He came running out of the pound at 100 miles an hour, climbed in my lap and off we went,” Kangas said. 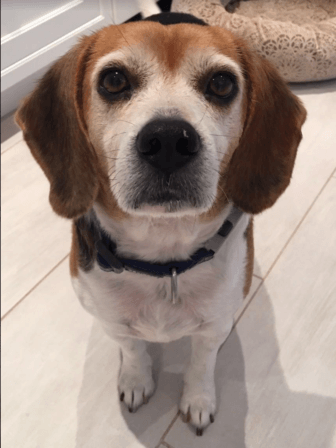 Benny at home with the Kangas family. Contributed

That brought the count to five at the Kangas house.

But her work with Stamford wasn’t over yet. After adopting Benny, Kangas wanted to do more besides pay the adoption fee.

She told Animal Control Officer Tilford Cobb about a program through her PRAI Beauty called ‘Free the Shelters,’ in which her company donates all adoption fees for a set time. She suggested holding an event in Stamford, and Cobb was delighted.

“That simple removing of barriers can result in huge success,” Kangas said, adding that since starting the program started in June, 2,300 animals have been adopted out of shelters across the country.

“We started with Tampa Bay SPCA where there were 81 dogs. We ran a Free the Shelters event, handled press and social media, and they called me hysterical,” Kangas recalled.

“I thought something was wrong. They were in tears when they said Kathy our whole shelter is empty. They sent me photos of empty cages.”

“We just placed 217 dogs in Atlanta this past weekend,” she continued. “And a guinea pig and a goat!”

During the two-week Stamford event, the $75 adoption fee be waived. (That fee includes spay/neuter, micro-chipping and vaccinations). The event includes cats.

Also, anyone who adopts an older dog that has been in the shelter for more than a year will receive two free training sessions to help the animal acclimate to their new home.

“We are starting a movement,” Kangas added. “Shelter animals can be pedigree or mutts, young or old … they’re all perfect and need to find good homes.  Shelters should be short-term foster homes rather than a long term jail sentence for companion animals.” 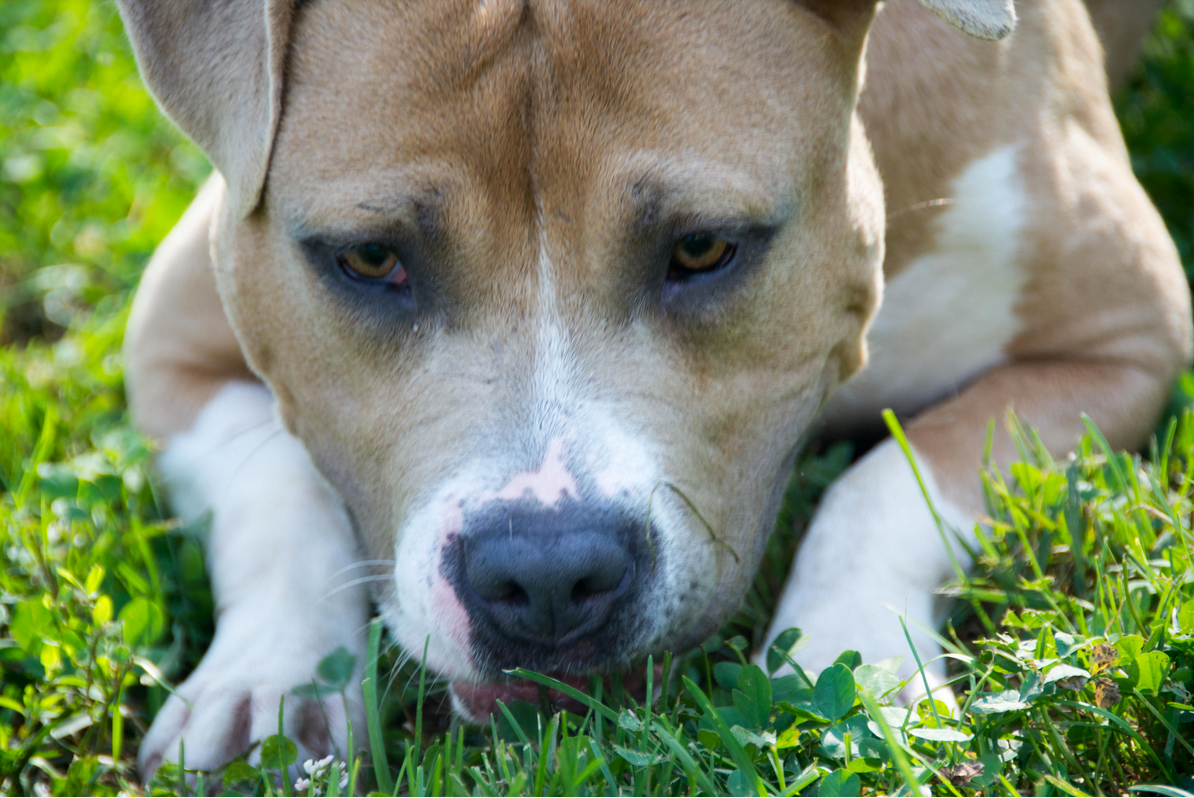 Frenchy has been adopted and will be trained to visit prisons in a project for 203K9.

Reached by phone on Thursday, ACO Tilford Cobb said that since the Free the Shelters event started, there have been three adoptions, including two cats on Wednesday and the adoption of a dog named “Frenchy.”

Frenchy, a Staffordshire Terrier who was surrendered to Stamford Animal Control following a cruelty situation several months ago, has been placed with a trainer with a group called “203K9.” Cobb said the trainer plans to use Frenchy for a prison program where dogs are trained.  “Frenchy is a great, smart dog,” Cobb said.

Cobb said he hopes the Free The Shelters event will result in more adoptions. Currently, he said there are four puppies, including Shay* and Bruno**  who were featured recently on Greenwich Free Press, and a pair of puppies found as strays who shelter suspects are siblings.

“They are pent up and not doing well here,” Cobb said, adding that the existing shelter is not ideal. Dogs face each other in opposing rows. “The environment the dogs are in – facing each other, it’s just bad any way you look at it. They get stressed out.”

In addition to the four puppies, who range from a few months old to 9 months old, there is a dog about to have puppies. Currently, she’s housed in the shelter’s office.

“By law we will advertise in the local paper that we have the dog and the owner has 7 days to collect her,” Cobb explained, adding that the ad will go out on Thursday and, if the dog isn’t claimed, she and the puppies will all be available for adoption. 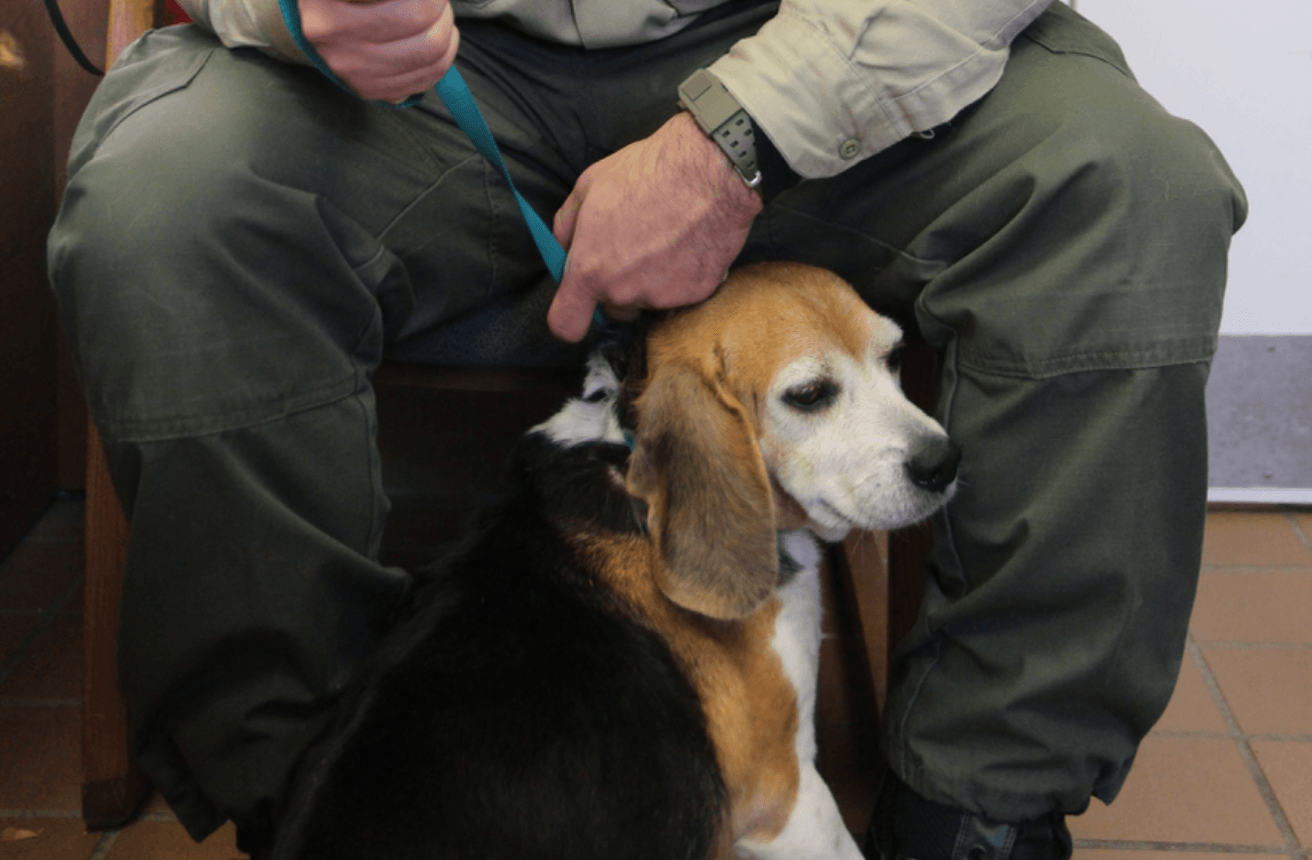 At Stamford Animal Control, Meet Benny, the Most Cuddly Beagle

*Meet Sweet “Shay,” Who Was Dumped at Stamford Animal Control