This article was written by Mike Dinan and originally published by NewCanaanite.com

Since starting as head of the New Canaan Police Department’s Animal Control section nearly two years ago, Officer Allyson Halm, who was previously an Animal Control Officer in Greenwich and later served as director of Adopt-A-Dog, has fielded and mapped daily calls of coyote sightings.

In one-on-one conversations with concerned New Canaan residents and as a panelist in larger events, Halm has preached about learning to co-exist with coyotes.

Now, in select cases, she can offer those who deal regularly with coyotes on their properties a set of tools to take with them outside—for example, when letting out a dog in the yard.

Underwritten by New Canaan resident and animal welfare advocate Cathy Kangas and her company, PRAI Beauty, the “Coyote Safety Kits” Halm has put together include “hazing” safety guidelines, reusable safety air blaster or air horn, mini-air blasters (for use while running or for kids), bear bell, whistle, reflective tape and “throw can” (a noisemaker that can be used to scare off coyotes from a distance).

“They are available now and we are going to utilize them on a case-by-case basis” depending on the frequency of sightings and brazenness of the coyotes involved, Halm said. “If someone calls and seems to have a coyote that has habituated, then I will look into it and see if it is appropriate to give away a kit. Coexistence is really the key.”

Now is good timing for the kits, as it’s breeding season for coyotes and “they are going to be more territorial at this time of year, so large dog encounters can take place,” Halm said.

Eastern coyotes such as those found in New Canaan can grow up to five feet long from nose to tail and 50 pounds, according to the Connecticut Department of Energy and Environmental Protection. They mostly eat mice, woodchucks, squirrels, rabbits, deer, some fruits, carrion and—when available—garbage.

“Some coyotes will also prey on small livestock, poultry, and small pets,” according to the state agency. “In Connecticut, unsupervised pets, particularly outdoor cats and small dogs (less than 25 pounds) are vulnerable to coyote attacks.”

New Canaanites have seen their dogs confront coyotes both on their residential properties and in public places. 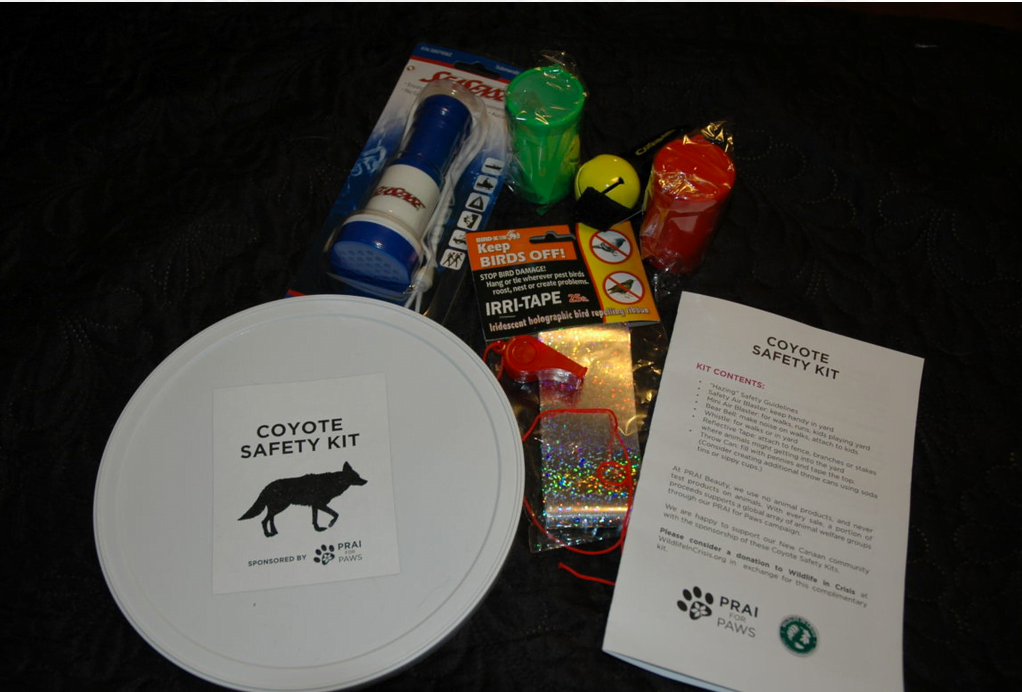 Leghold Traps
A coyote for several days in December was seen dragging a foothold or “leghold” trap around northern New Canaan—reigniting discussion in town about doing away with that mode of hunting.

One year ago, a red fox had become ensnared in one of the leghold traps, which also have been known to trap domestic animals such as dogs and cats, as well as unintended wildlife such as raccoons and opossums.

For Halm, coyotes do not present a “problem” as much as a need for “lifestyle acceptance change” among residents.

“They are here to stay,” she said. “Now we need to learn how to live with them—to protect ourselves and them, each from the other.”

Halm said she will offer sample kits to animal control facilities including Greenwich, in the hopes that they follow suit regarding education on hazing.

The kits are free to residents, and as appropriate, donations may be encouraged to Weston-based Wildlife In Crisis.