Greenwich High School social studies teacher Ian Tiedemann is one of those teachers who brings out the best in his students.

Recently recognized as one of Greenwich Schools Distinguished Teachers, Mr. Tiedemann has his students’ best interests at heart. So when a couple sophomore boys approached him about starting an Economics Club, that is both the reason why he said yes, and the reason he hesitated.

“They all have extra curriculars and sports already,” he said. “When they approached me, I hesitated,” he added, referring to Will Goodman and Alex Luna from the GHS Frisbee Club he supervised for many years until it was phased out due to a shortage of fields.

And there were other considerations. Not only does Mr. Tiedemann supervise Model UN, which is a huge time commitment that involves travel with students as far away as Philadelphia, New York City, Princeton and Washington DC, but he also commutes to Wilton. And did we mention, he and his wife are expecting their first child.

“But the students were interested in learning, versus getting a grade,” Tiedemann said, hinting at why he ultimately did not decline the boys’ request. “These guys care about learning.”

Tiedemann, who has taught AP Economics for three years in addition to 9th grade Global studies, said he was impressed the boys wanted to learn on their own, outside class, and not get credit for it. “They wanted to learn this subject on their own. That’s why I couldn’t say no.”

Tiedemann recalled how recently, when the free response section for the AP Economics test was released, the Econ Club boys couldn’t wait to get their hands on them. “I showed it to them and they were so psyched! This is how much they love this,” he said. “They wanted to see the questions and challenge themselves!”

The genesis of the club goes back to Will’s broken wrist.

“I was supposed to go to Nike tennis camp, but I had a bit of an accident and broke my wrist and couldn’t play. I was stuck at home and reading a lot,” Will said, recalling how the newspaper headlines that summer featured changes in the Chinese stock market. “It was really crashing and I wondered, what if we could start something at GHS for the kids interested in economics? Why not start an economics team?”

Will said that he and Aaron Peterson were sharing a Mandarin tutor during the summer in order to skip a year of class.

“We were walking to the library and Will suggested it and I thought why not?” Alex said.

Next the boys set their sights on Mr. Tiedemann, who they described as hard to get.

“I hesitated. I said, guys, you could take it in a class,” Tiedemann recalled. “I worried they might be taking on too much.”

“But if you do it on your own, it’s not really work,” Will said.

Fast forward to spring time. A team of four boys from the Economics Club – all just sophomores –  took first place for the David Ricardo Division of the National Economics Challenge. They also took 10th place nationally. What’s amazing is that none of them having taken an economics course!

The challenge, which has both a David Ricardo division and an Adam Smith Division, is set up with AP Economics-style questions.

“The club meets each Thursday, plus we practice using video on our own to learn the material,” said Aaron. “We also Skype to prep for the questions.” 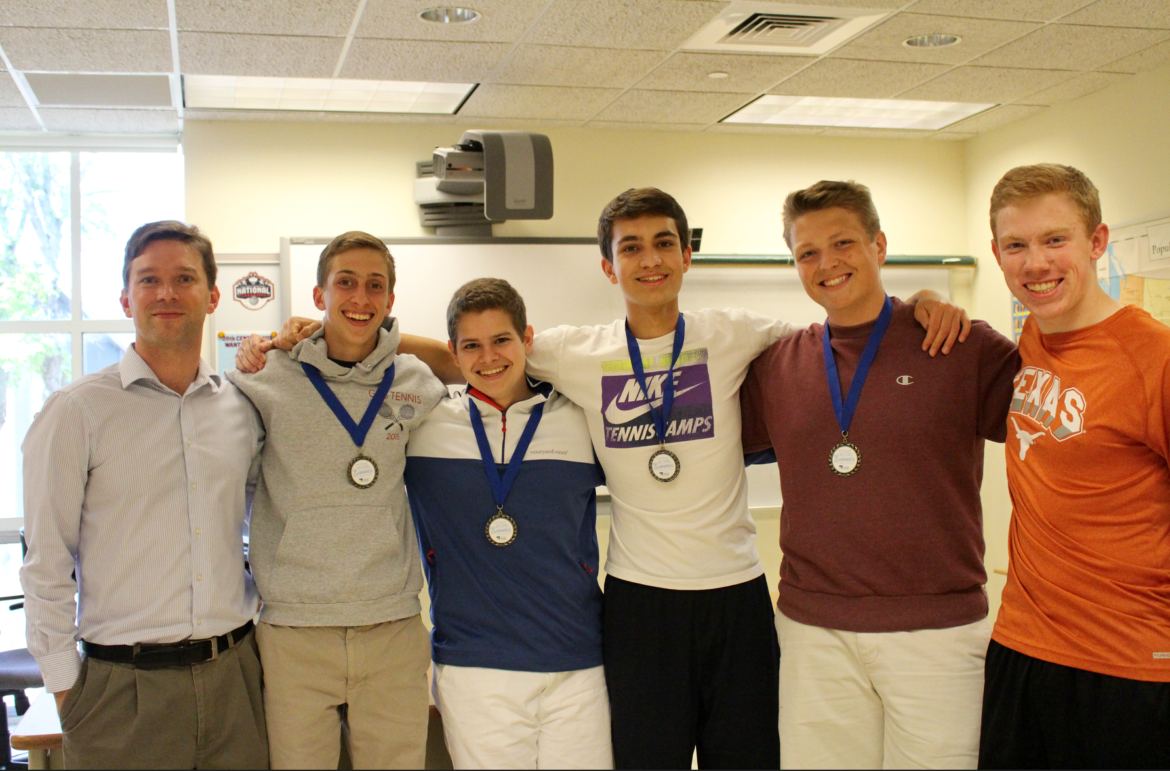 “Will created a Quizlet. It’s a study guide, sort of like online flashcards,” Mr. Tiedemann said, adding that it’s always ideal when a student takes the initiative and establishes communication among the group. “They enjoy learning on their own and help each other.”

“We learned the material at home and on our own time,” Will said. He said that for the concept of real versus nominal value the boys compared the success of Star Wars to Gone with the Wind. “Mr T puts things into human speak,” he said.

Mr. Tiedemann said that 32 states in the US have their own divisions in the National Economics Challenge, but Connecticut no longer had one. Teams without their own division were allowed to compete in the Wildcard division.

“When you look at the wildcard division, it was mostly Connecticut kids,” he said. “So they re-created a Connecticut division.”

The first round of the competition was virtual. The second round, a couple weeks later, was for the winners of the earlier round. “If our team had won, they would have gone on to a quiz bowl type of challenge,” Mr. Tiedemann said. Still, not too shabby for the boys who haven’t even taken a single Economics class yet.

“There’s nothing like a kid having fun, learning and being safe – the three things that make for a good experience,” Mr. Tiedemann said. 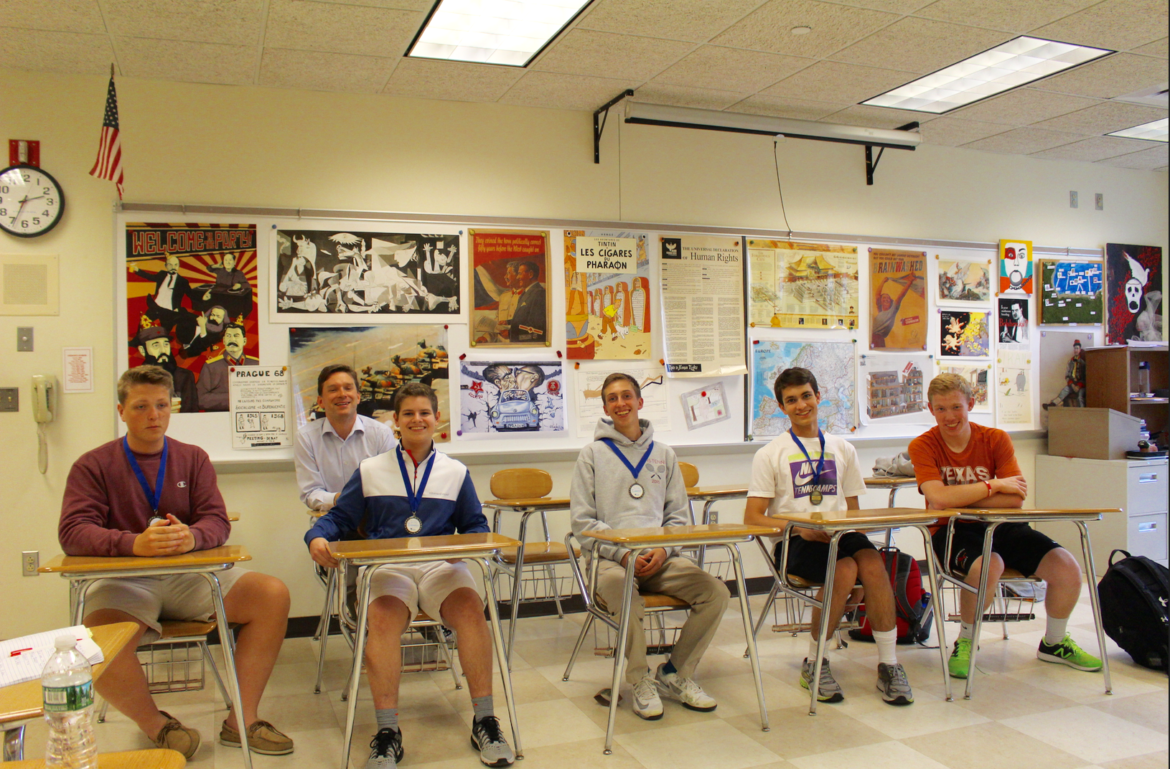 See also: Standing Ovation for Greenwich’s 2016 Distinguished Teachers at Board of Ed Meeting 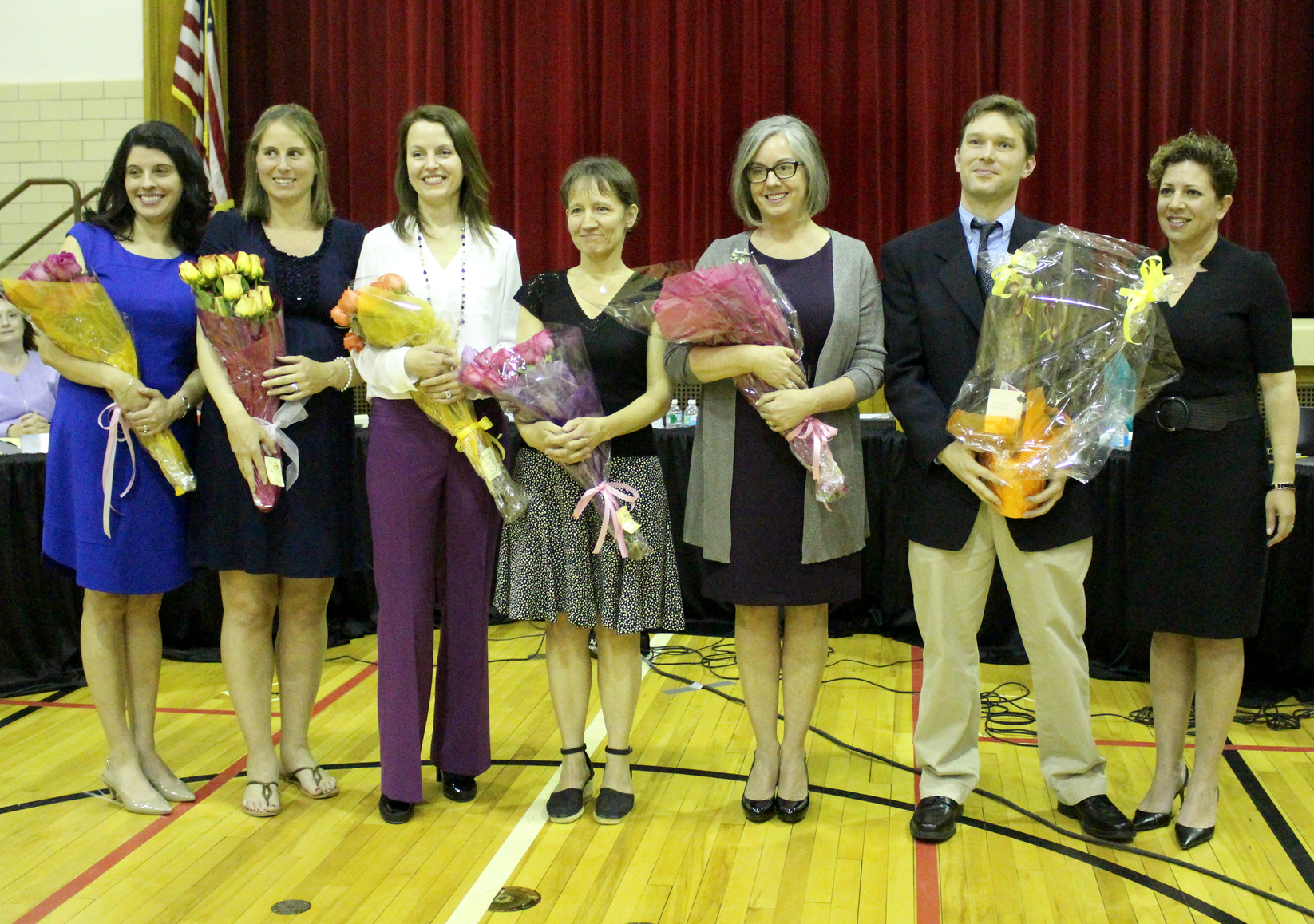 Ian Tiedemann receiving flowers the night he was honored at the April of Education meeting as Distinguished teacher 2016. Credit: Leslie Yager