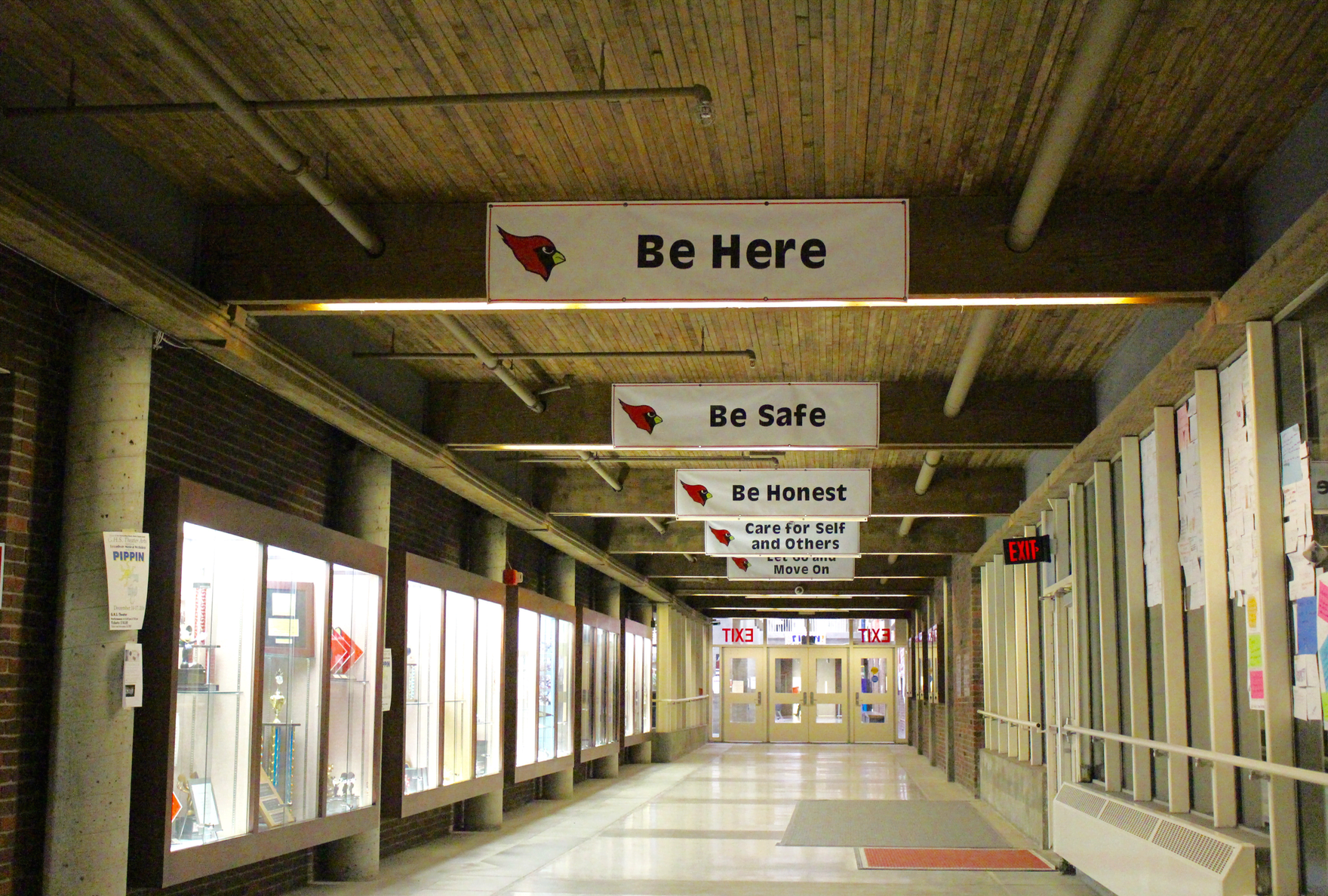 District norms posted overhead along the glass corridor at the entrance of Greenwich High School.

Greenwich High School Junior Christopher McDonnell said he didn’t walk out of school on Wednesday to make a statement about gun control.

Reached by phone, Christopher said he was scared as he walked into the brisk cold at 10:00am while about 2,700 other students crowded down the glass corridor toward the student center.

“I wondered, will security or police come get me?” he said, adding that as a junior he is not technically not allowed off campus. “When I stepped off school property to talk to Greenwich Time I was scared. But nothing happened.”

Asked why he walked out of school if not to make a statement about gun control, Christopher said he just didn’t think the school should be controlling the event.

Christopher, who described himself as a serious student who took 4 AP classes as a sophomore, said he had been talking about walk-outs and potential consequences with his mother, who is an assistant superintendent at a school district in New York.

“My heart was racing,” he said, even though there were no police or school security at the exit from science wing when he walked out.

Christopher said he and his friends had planned to walk out together, but his friends were intimidated by police and security at the exits. Also, he said his friends tried to text each other to coordinate their walk out, but bad cell phone service meant messages weren’t delivered until after the rally.

“Their presence was intimidating, intentionally or not,” Christopher said of police and security guards.

Christopher said he first learned the student led “unity rally” would be organized by student government when it popped up on  Cardinal News. “Initially we all thought, that will be lame and not be a thing,” he explained. “We knew there were compromises going to be made.”

Christopher said none of the five speakers at the rally mentioned the word gun control.

“I’m sure they wanted to, but all that passion was stripped out because they were doing this as representatives of the school’s interest,” Christopher said. “There’s a place and time for that, but not this time.”

“They kicked one guy off the ballot for going off script,” Christopher recalled. “It was a perfectly fine speech, and I had that in the back of my mind. Every word was vetted by the school. That meant they weren’t going to say what they wanted to say. I thought they were doing it for a press show and that’s why I was surprised the press was banned.”

Another aspect of the rally that puzzled Christopher was its 10:00am start time, to be coordinated with walk outs across the country, because that was not the original plan.

“The rally could have been done at any other time. This was not a real walk out,” he said, adding that students were not allowed to stay in their classes to do homework. “It was easier to go with the flow. I don’t think kids cared passionately either way. It turned from an opt-in event into an opt-out event. That means the level of dedication goes down.”

Christopher said the kids who cared the most about the event were the student government members, but that they had good intentions.

Christopher said that one of the speakers, Gigi Imperatore, mentioned students being revolutionaries.

“That was during a government-sponsored event where you were being watched by security the whole time,” he said. “It was the antithesis of an actual protest.”

“They replaced an opportunity for students to voice themselves, politically, publicly and defiantly, with something more like an assembly,” he continued. “The event functioned similar to censorship like in China or Russia, when you have opposition protests, which are nicely controlled and then they disappear, but nothing really changes.”

“Most kids thought it was pretty lame. It was cookie cutter and didn’t push any boundaries,” Christopher said. “It was thoughts, prayers and platitudes. They didn’t propose anything that would rile anyone up. If you don’t rile anyone up, you’re definitely not pushing boundaries.”

Christopher’s friend Zach Lori, also a junior, said he had planned to join the walk-out but was foiled by the bad cell phone service.

“I was going to go outside with Chris but I didn’t know if they were still going to do it,” Zach said.  “In one of my classes after the rally we spent the block having a discussion. Not one person, including the teacher, thought the school should have sponsored the rally. One of the reasons was their pretending it was a non-partisan event.”

“School safety is an a political issue,” Zach said. “Gun control is one of the most divisive issues facing the country and I feel like the rally trivialized the issue.”

“We have ideologically diverse kids in the class, but most of the speakers were pre-selected from student government,” Zach said. “I know someone who asked to speak out and was denied.”

“The whole point of a protest is it’s supposed to be unsettling. Obviously the school didn’t want to deal with those security issues,” he said.

As for the media ban, Zach said, “It showed how they didn’t want people to ask kids what they thought of a rally instead of a walk out.”

“By turning the walkout into a school-sponsored affair, Greenwich High School alienated both liberal and conservative members of our student body,” Zach said, adding that liberal students criticized the rally because the pro gun control sentiment was edited out. Conservative students didn’t like how the rally was held at 10:00am, the same time as the national walk-out.