This article was written by Michelle Xiong and Emma Burstiner for The Beak at Greenwich High School, and was published on Friday, March 16, 2018 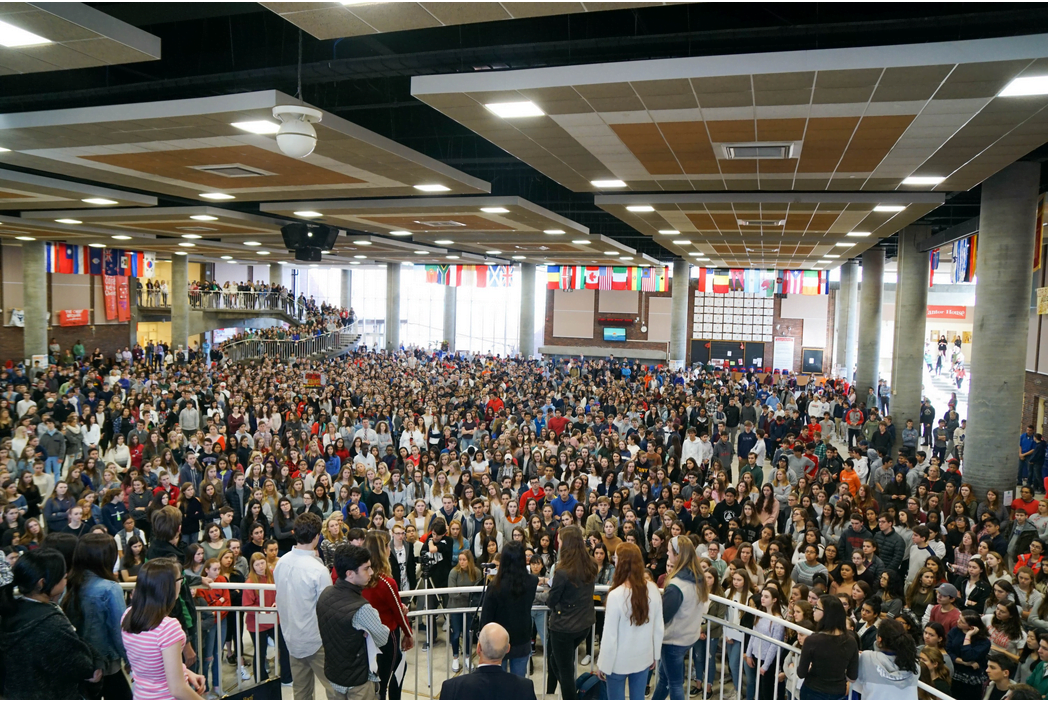 Photo: Lucy Massam for The Beak.

On March 14, one month since the tragic Marjory Stoneman Douglas High School shooting in which 17 students were killed, schools across the nation rallied together and walked out of their classes at 10:00AM for 17 minutes. As Dr. Winters established in his email to the students, parents, and faculty, the message for the walk-out was that “we must do more to stop school shootings.”

The GHS Young Democrats were eager for the walk out. Sara Stober, one co-President shared, “Parkland students remind us how important it is to stand up for what we believe in. Even though we can’t vote, we can still make an impact, and it’s so important for us to come together and agitate change. It’s been so heartening to see Democrats and Republicans alike come together to create common sense gun legislation, and I think that the students’ activism has already brought tangible change. We will never be able to make up for the senseless and preventable deaths from gun violence, but we can work together to make sure it never happens again.”

Many students, though, felt that the message of the protest was lost.

“I understand that the school is trying to keep us safe and I appreciate that they are supporting the students, but I feel like they are taking away the meaning of the protest,” shared Leticia R, a sophomore, “The point of the protest was to protest the gun laws and encourage more changes.”

Another sophomore, added to this by explaining that the students and school were “only really rallying for student advocacy not anything more than that.”

When speaking about the protest, a third student asked “What are we even rallying for?”

Another common criticism of the protest was that nationally, the movement was meant to be a “Walkout.” Many disliked that this rally was the compromise found between the student leaders and administrators, as they were expecting students to go outside on their own will.

While news stations across the country stopped at 10:00 AM to show the school protests happening, Greenwich High School told the outside press that they were not allowed to come and report on the rally. An official email summarizing the event was sent to the town a few hours later.

“We should have gone outside because we aren’t really protesting. It’s too structured,” an anonymous sophomore shared. This was followed by the comment that “it feels like an assembly.”

Senior Pearl Cadigan explained, “The school getting involved is the opposite of the point, the whole point is that the students are supposed to lead it and go outside of the school.”

Sophie Lindh was the first speaker and she opened with the message of “promoting action” and explained that “Representation is what we seek” as high school students of America, especially in wake of the recent Parkland School Shooting.

Greg Goldstein, the student body president, followed her by saying that all should be “invested in the protection of our students;” he emphasized the point that “student safety is not a political issue” as “no student should have to be constantly on high alert in school.” He shared a personal experience, explaining that his cousin was actually a few doors down from the tragedies which ensued at Parkland High School. This helped to solidify his points about school safety and led him to the rallying cry of “Enough is Enough.”

Encouraging students to “use [their] voices to make a change,” Willa Doss spoke next. She used the Parkland tragedy as a way to connect with students as she said that all should “remember the desire to make a change, to act.” She implied this came about for many as a result of this tragic event. In an attempt to mobilize the students she encouraged all to “attend rallies and protests” and to “get to know our local politicians and see how their views align with ours.”

Gigi Imperatore, a Junior, shared moving and easily relatable words. She painted the picture of the usual thoughts and worries of a high school student, and she then drew a parallel to a student at Parkland High School who no longer can have this typical high school experience as her friend Carmen was lost in the shooting. She used this easily understood example to illustrate that this is “a reality no one can ignore” as gun control is not just political but it is a “social and life issue.” She closed by stating that now is the time when we should “not just learn about the revolutionaries but we become them.”