Update: The GHS Headmaster, Dr. Chris Winters, in an email, described Friday morning’s walk out as spontaneous. He said teachers were informed on Thursday that in the event students wanted to walk out of school, they should not prevent them from leaving the building. They would not alter the day’s schedule, but rather teach class, take attendance and hold students accountable for work as on any normal day.

Also, he said, teachers were instructed not to communicate to students that they can miss their class to participate in a walk out. They were told, “If students ask permission, tell them that they are free to make their own choice, but that as the teacher, you are taking attendance and proceeding with your lesson as planned.”

Winters said the students marched around the building and into the Student Center, before returning to class. “The students were very cooperative and respectful,” he said.

Back on March 14 there were walkouts at hundreds of high schools, but not at Greenwich High School. Students were instead ushered into the student center for a “unity rally” at which student government leaders read prepared speeches that mentioned neither gun control nor the NRA.

Unlike the March 14 event, where police officers were stationed at almost every exit door, and only one student, Chris McDonnell, walked out after finding a science wing exit where no police were stationed, April 20 was different.

While none of the GHS teens was even born when spree killers Eric Harris and Dylan Bennet Klebold wreaked havoc on their high school, they understood the significance of the anniversary.

At 10:00am sharp hundreds of them exited the building into the bright sunlight.

Back in March, reaction to the unity rally at GHS was mixed. An article in The Beak, the GHS student newspaper by Michelle Xiong and Emma Burstiner chronicled the varying opinions, with one student saying they understood the wish to “keep students safe,” but another student asked, “What are we even rallying for?” 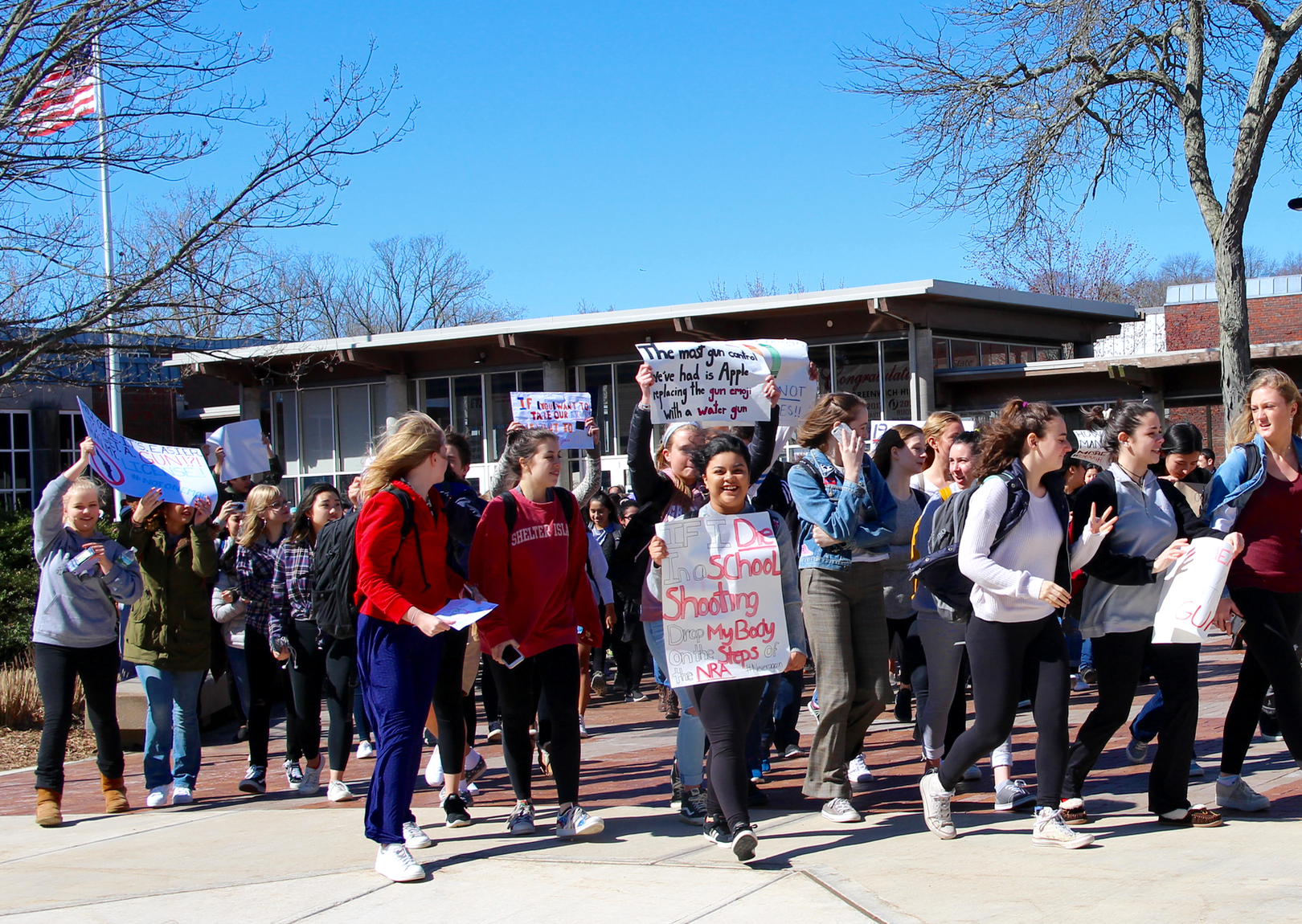 GHS student Jake Karetsky wrote a letter to the editor saying, “I wanted to see division at GHS. I wanted to see people upset that the ‘other side’ was expressing their views. I wanted to hear thousands of voices shouting. Talk about a practical civic education. I didn’t want to hear a bugle playing Taps and a couple of insipid speeches from student government leaders who I know for a fact hold powerful political opinions yet were prevented from expressing those opinions by the nature of the school-sponsored event.”

Friday, April 20 was different in many ways.

Not only did April 20 represent the 19th anniversary of the shooting at Columbine High School in Colorado that left 13 people died.

And while much of the senior class was missing, a crowd of GHS students streamed out the doors from the glass corridor at 10:00am holding up posters and chanting, “This is what Democracy looks like,” and “Hey, hey, ho ho, the NRA has got to go.”

And, unlike the March 14 event in which media were explicitly “banned,” the decision having been emailed from the district’s head of communications the day prior, no such ban was communicated for the April 20 walk out.

Also, on Friday there were no police stationed by exits. At 10:00am there was just one police officer parked in her patrol car on Hillside Road. By about 10:15 a second police car arrived, and school security asked two reporters to move off campus. By then the crowd had begun their march.

“I appreciated the unity reality that we held,” said senior Rene Jameson, who went on to talk about the value of civil disobedience and how proud she was of her peers for from all grades who walked out.

Jameson, who recently organized about 40 students with posters in favor of the plastic bag ban in Greenwich to turn up at an RTM meeting and speak before the 230 member organization, and who last month was honored with the Ernest Fleishman Community Service Award, said, “We don’t have enough paper and pencils in classes.”

As she held a sign that said, “Bullets are not school supplies,” she led the students in their chants. 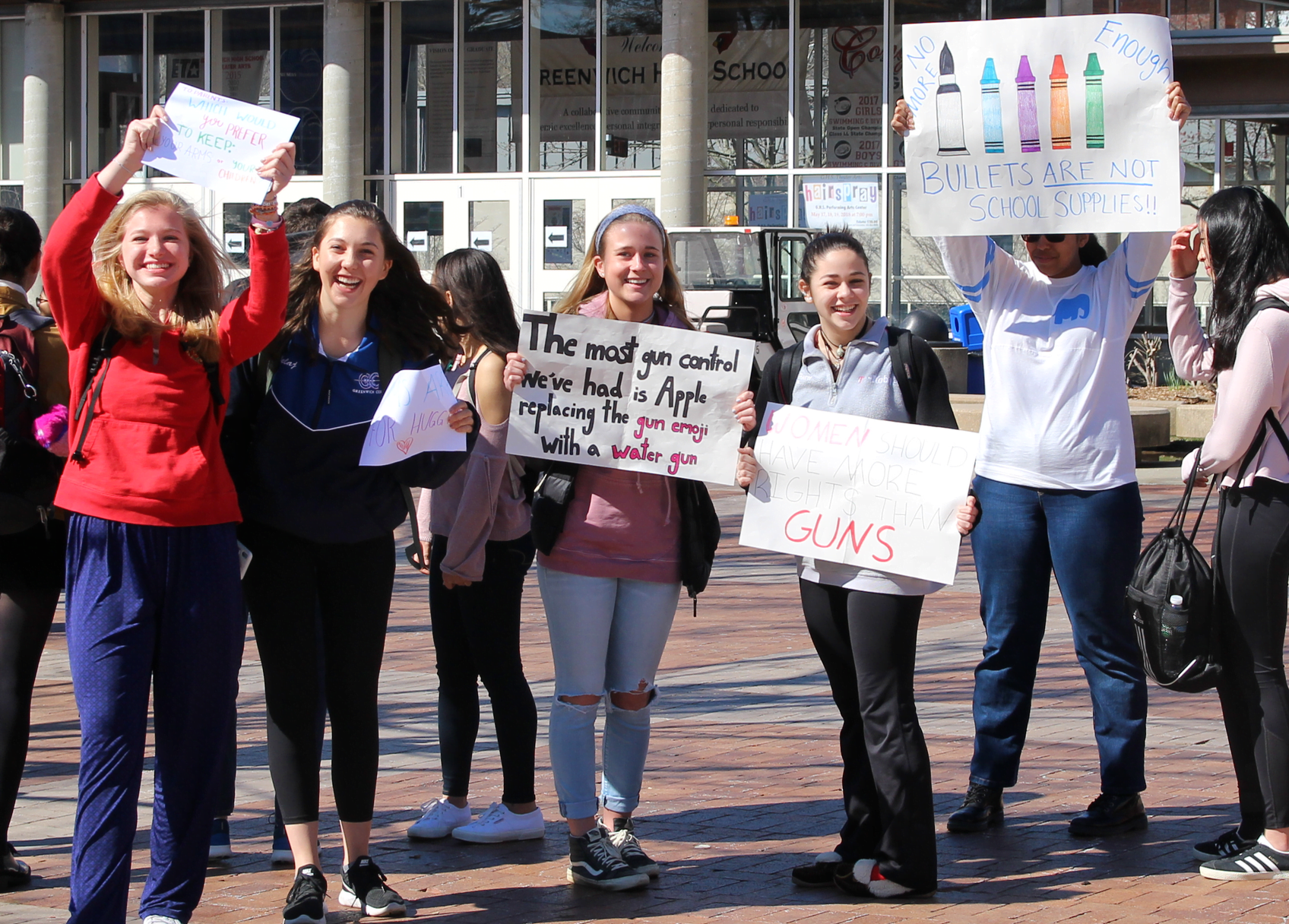 GHS junior Gigi Imperatore, center, with a sign that said, “The most gun control we’ve had is Apple replacing the gun emoji with a water gun.” April 20, 2018 Photo: Leslie Yager

GHS junior Georgia “Gigi” Imperatore, 17, who is not in student government but had gotten permission to speak at the March 14 unity rally, held a poster on Friday that said, “The most gun control we’ve had is Apple replacing the gun emoji with a water gun.”

“I am so happy. I put something on Instagram earlier about the walk out, and right away six kids responded,” she said as students chanted, “We are students. We are victims. We are change.”

Around 10:10am, Jameson, the first out of the building just before 10:00am led the crowd of about 400 students in a march around the entire GHS campus, shouting, “Everyone, we’re staying peaceful.”

“I’m so proud of my school!” shouted Jessica Toscano in between chants. “A lot of people care.”

As hundreds of students marched in the bright sunlight along the front of the building, Kate Piotrowski, a senior held a sign that said, “The 2nd Amendment doesn’t even make sense grammatically. Seriously, have you read it?”

“As a student I think it’s really important that we recognize that we want safety in our school,” Piotrowski said. “To show that it so meaningful. Coming out today is not only to support all the students that have been effected, but also to show we want to see change.” 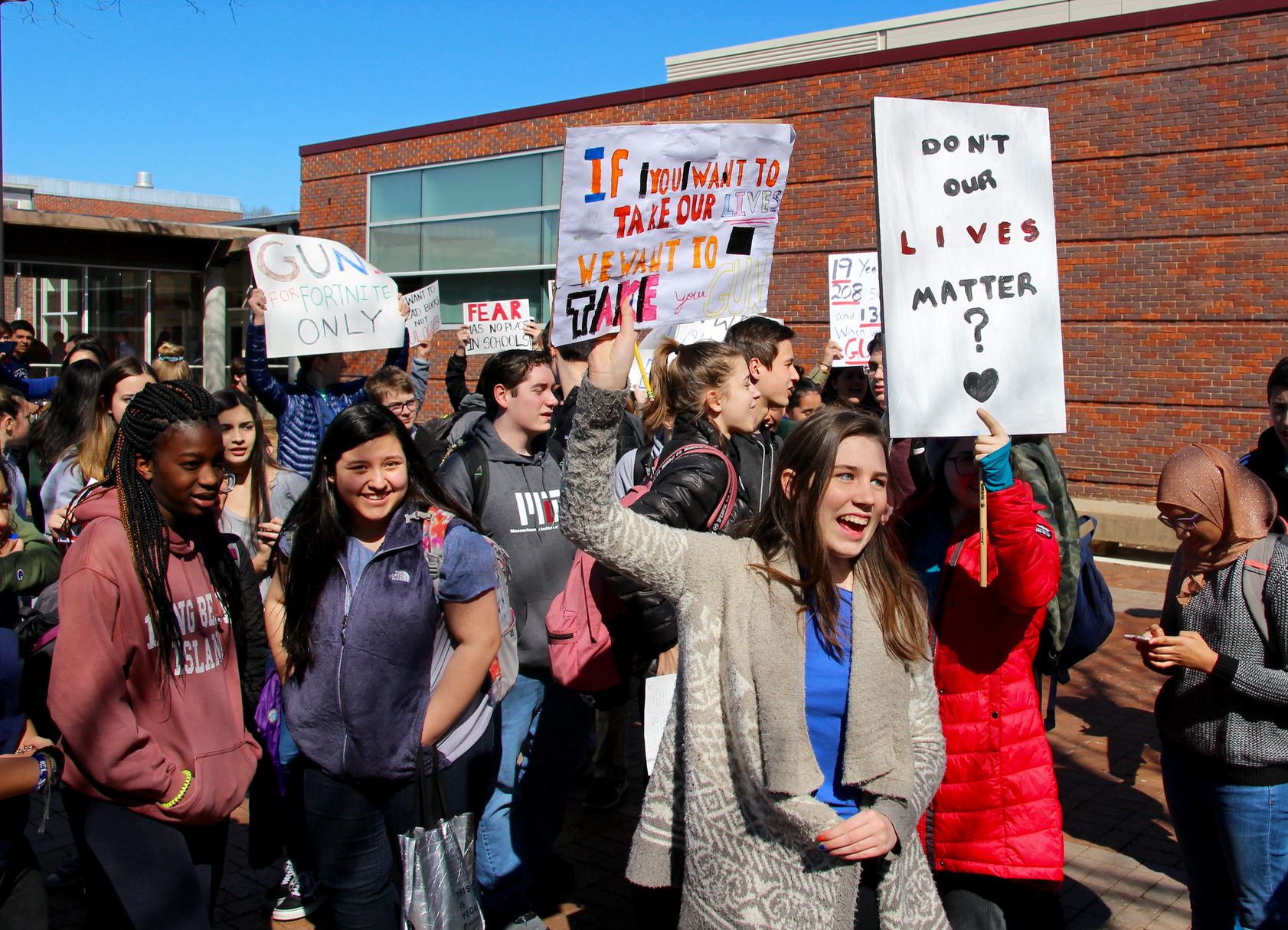 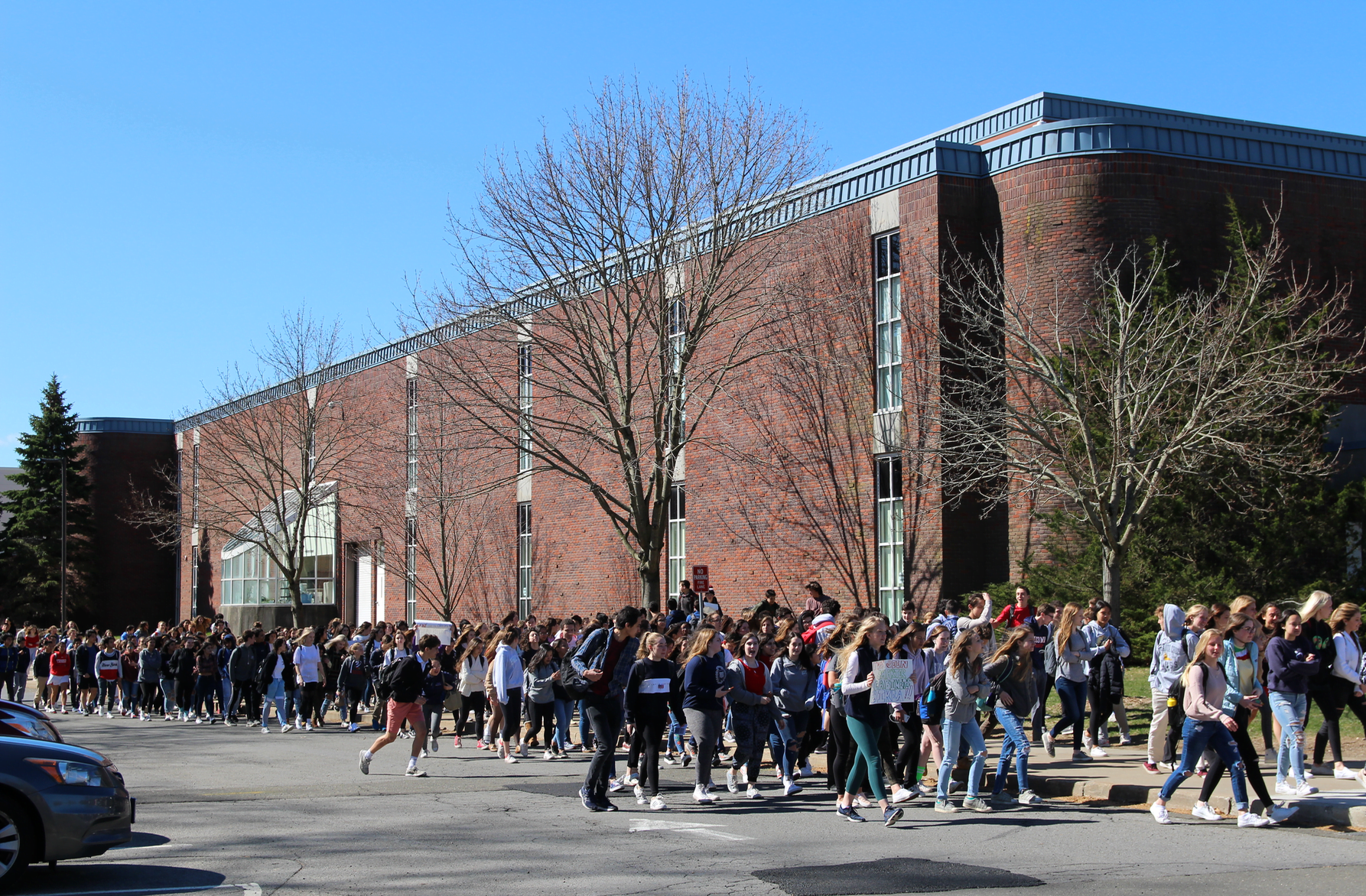 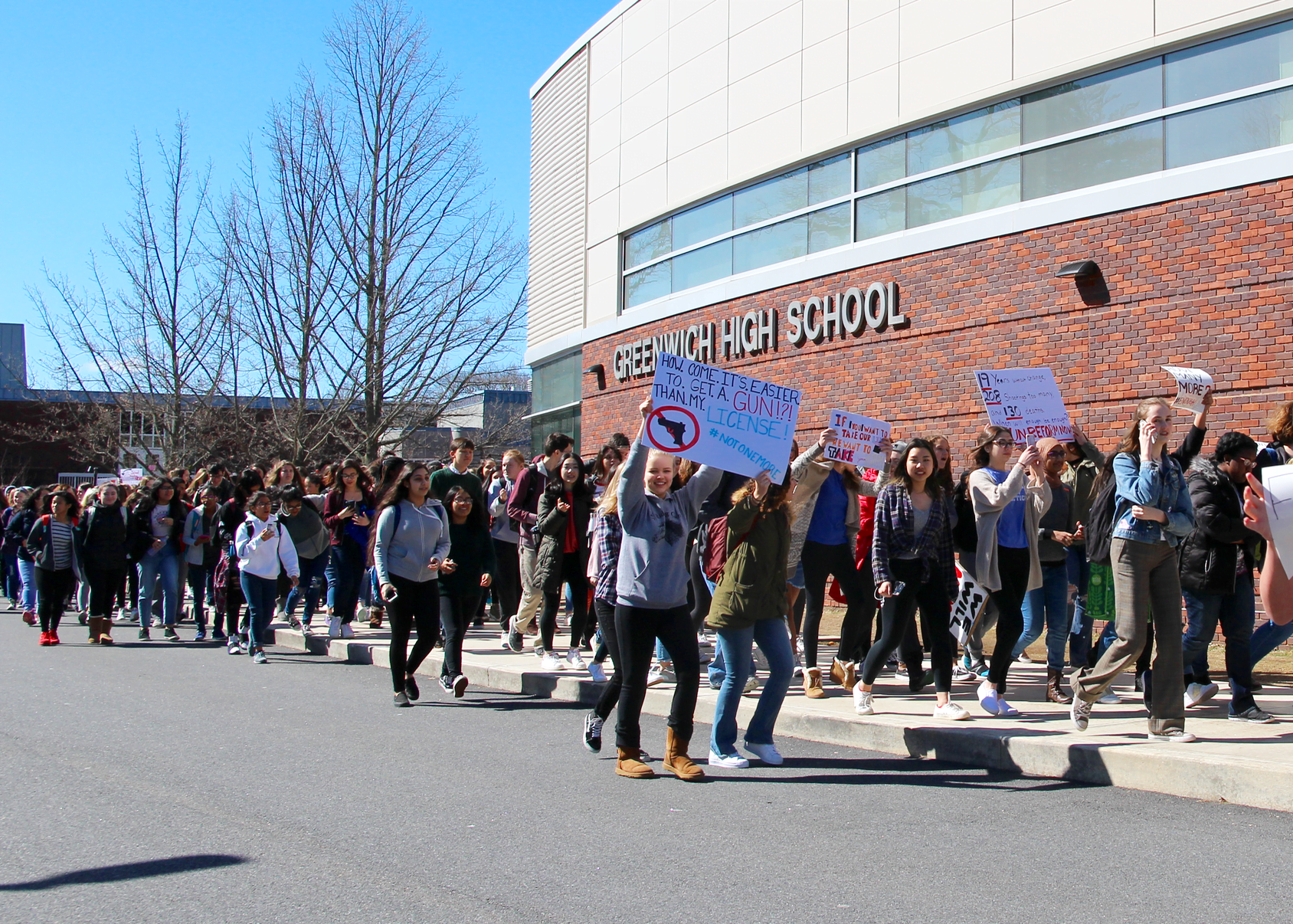 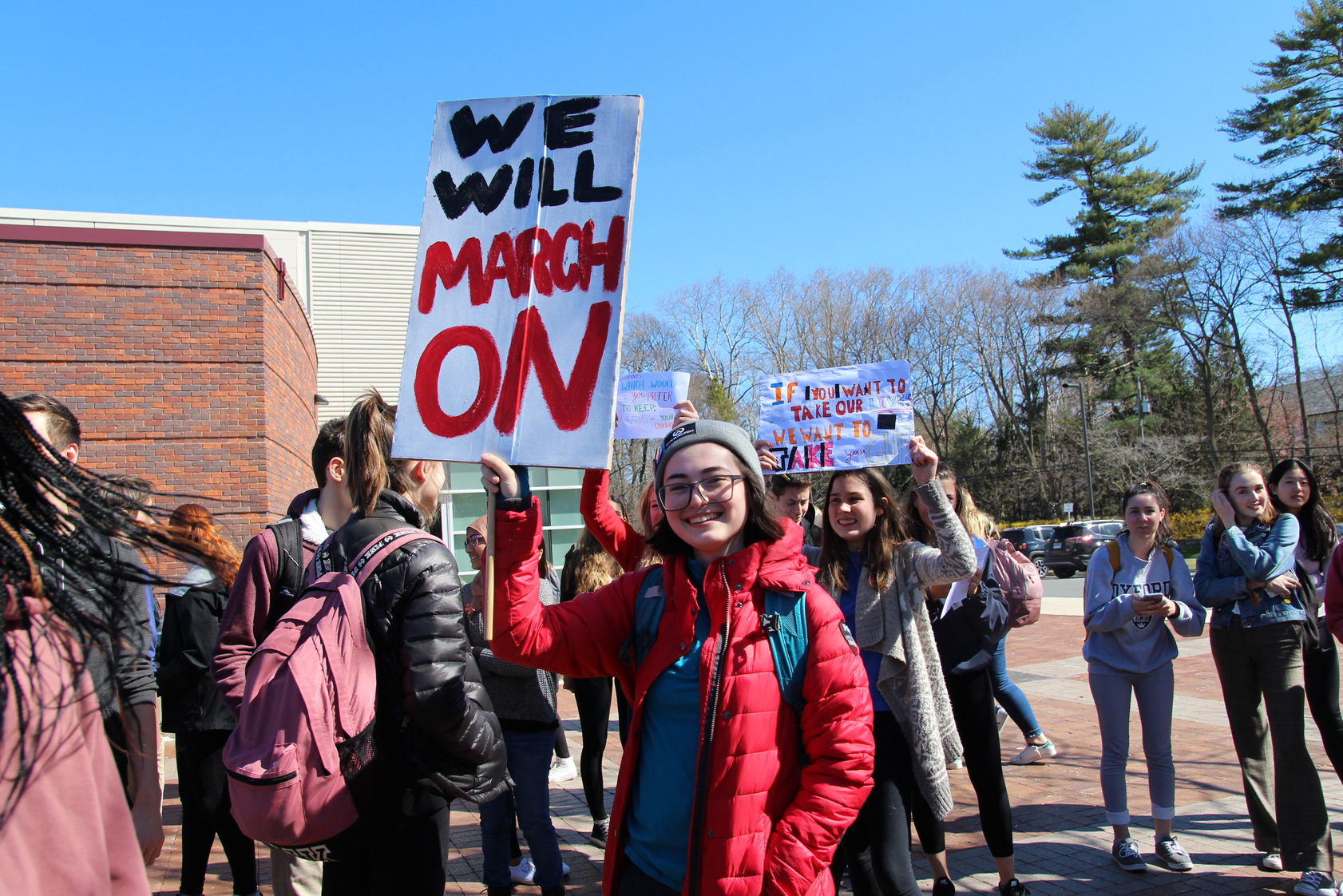 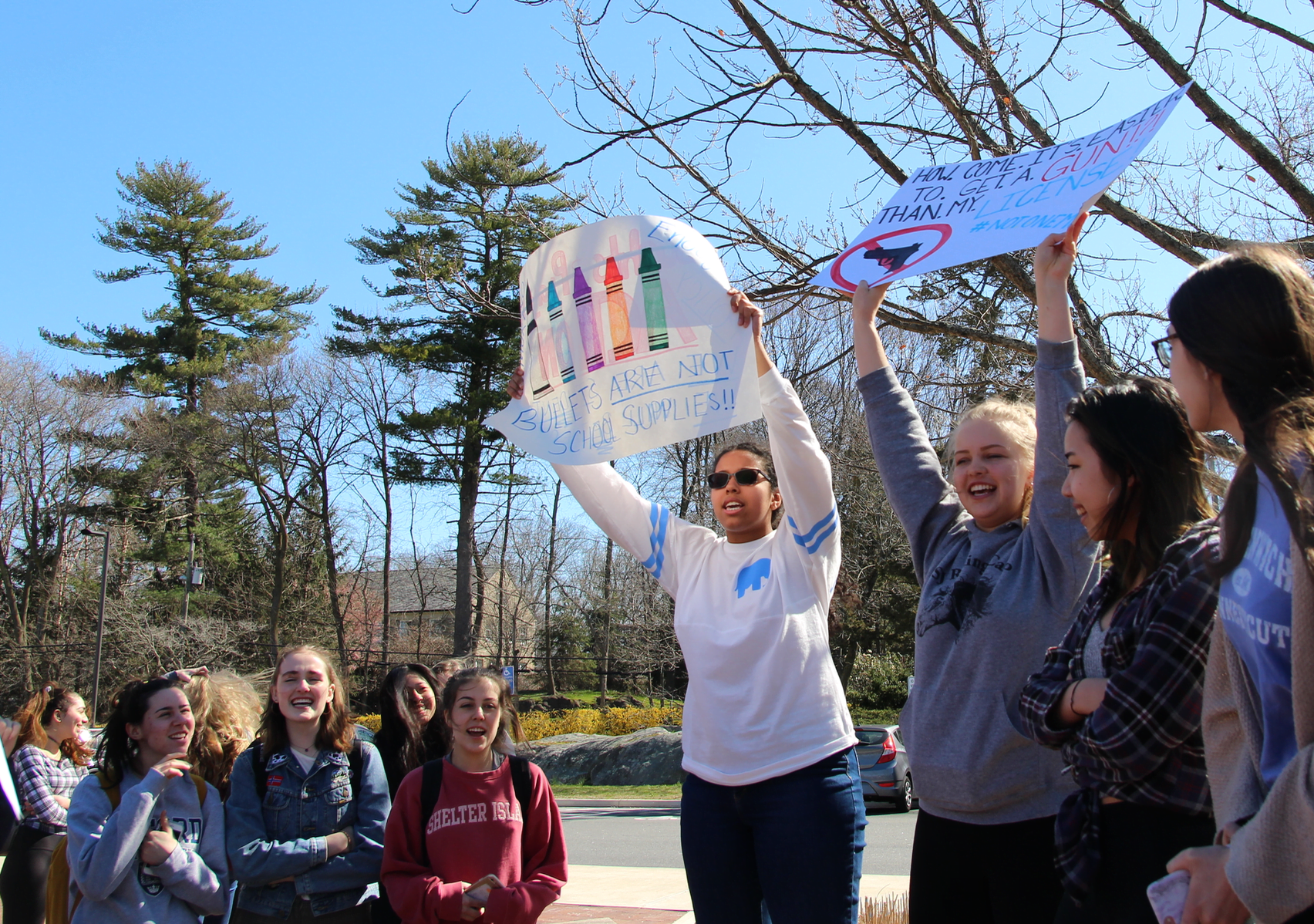 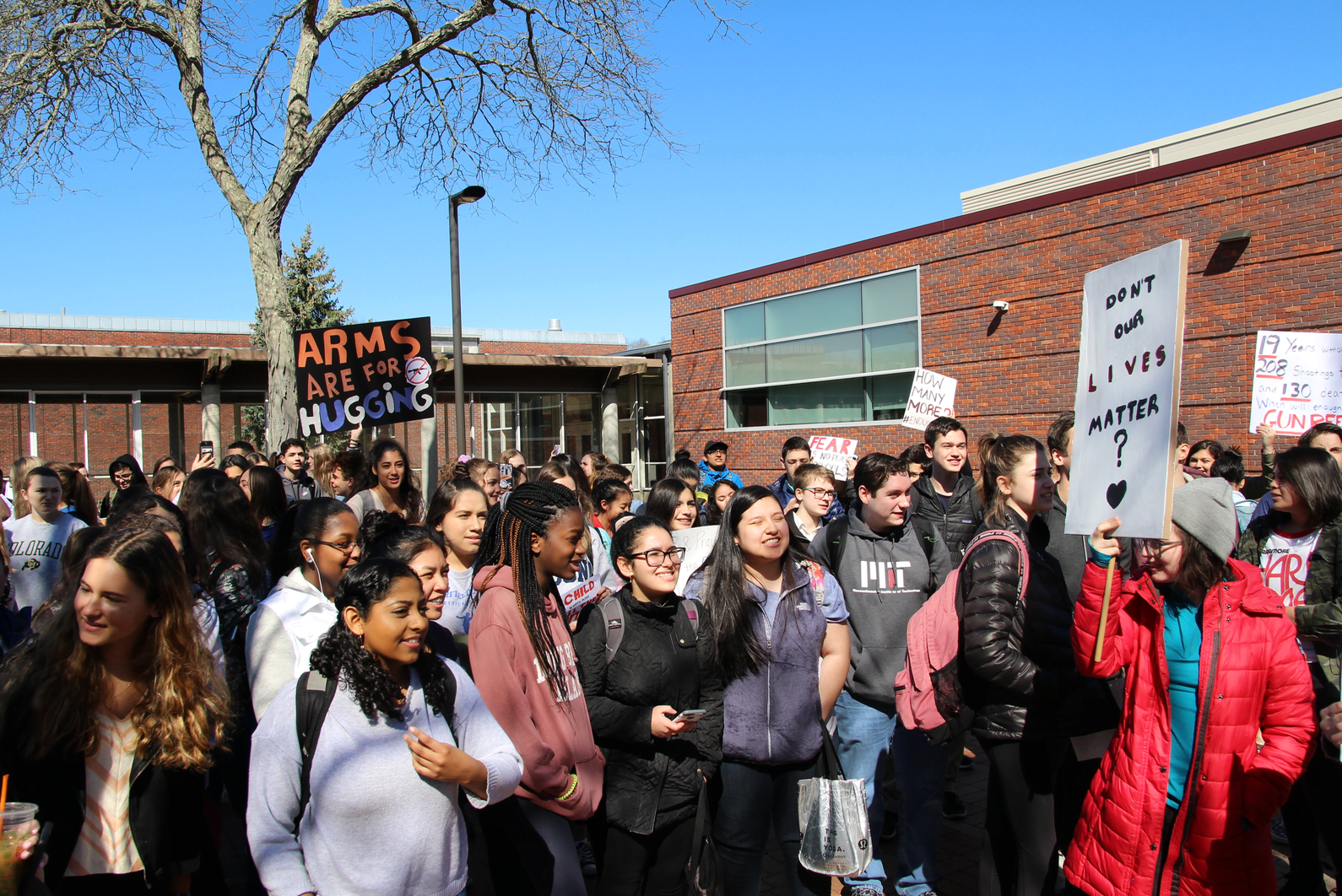 Media Banned from “Unity Rally” at GHS. No “Walk Out” Allowed (March 14)

GHS Student: Unity Rally On One Month Anniversary of Parkland Missed the Mark