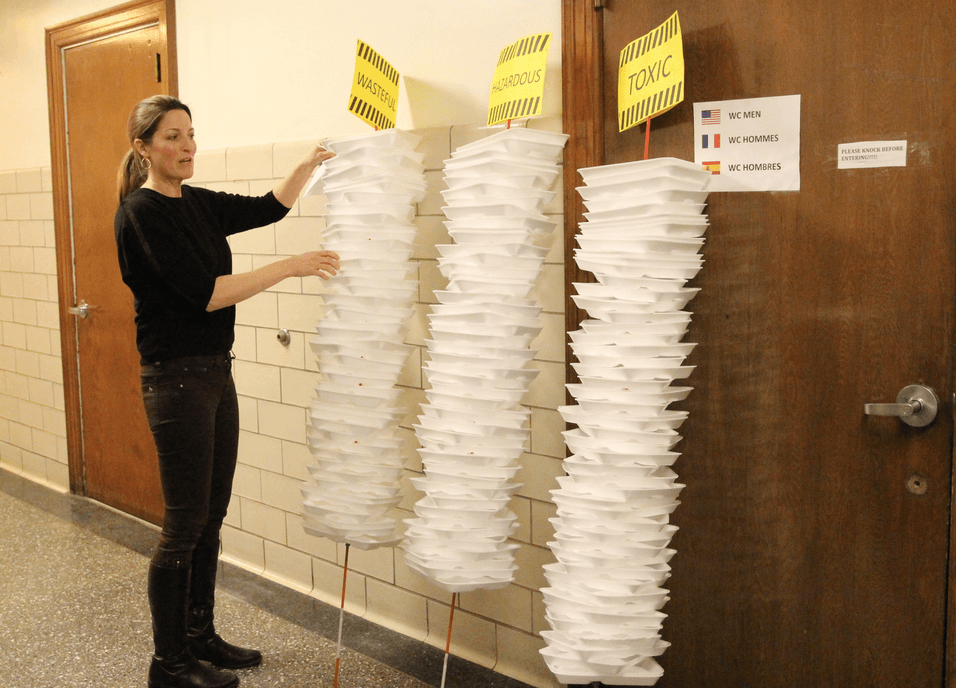 Julie DesChamps who is a member of the Greenwich Recycling Advisory Board (GRAB) and PTAC Green Schools Committee created a display using a single day’s worth of Styrofoam trays used at Eastern Middle School. Photo: Leslie Yager 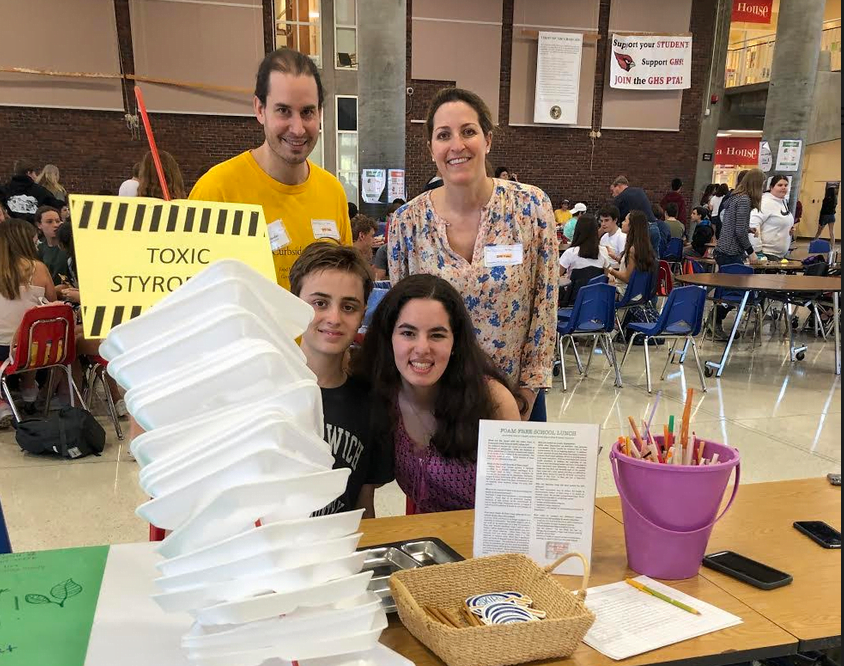 Recently, there have been several movements to have Greenwich become more environmentally friendly. From Skip the Straw to the plastic bag ban, students and parents in Greenwich are making an effort to better the town’s environmental footprint.

The current styrofoam trays used in school cafeterias are made up of polystyrene which is a possible carcinogen and neurotoxin. Constant exposure to these trays can lead to “depression, headache, fatigue, and kidney disfunction,” according to the “Sustainable Food Wares” campaign announcement. The styrene can leach into hot and acidic foods and may be ingested when the trays are scraped by students.

These trays also lead to enormous amounts of waste because they are not considered recyclable in Greenwich. Over 480,000 trays will be added to the waste stream each year – without these trays, there will be a 75% reduction of cafeteria waste. Because the trays also must go to landfills, dangerous air pollutants are released into the air due to the required incineration.

The latest environmental movement to take the Town by storm is the “Sustainable Food Wares” campaign. This movement was promoted recently during Earth Week at Greenwich High School and again at the Board of Education meeting on May 16.

On April 25, the Board of Education approved the ban on styrofoam lunch trays by the beginning of summer school this year.  They also agreed to begin investigating alternatives.

This was an important step in improving student health and district sustainability. However, the Board of Education did not “request funds for reusable trays and dishwashers.” The group who is pushing for this movement is requesting an appropriation for $130,000 in order to support the reusable tray and dishwasher system for the entire district for the upcoming 2019-2020 school year. This cost can be be considered a fraction of the cost of other projects used to improve student health. Also, the money will be quickly recovered in the “savings from procurement, hauling, and disposal,” according to the “Sustainable Food Wares” campaign announcement.

The leaders of the movement, Julie DesChamps, from Skip the Straw, and Nick from Curbside Compost, ask for people to contact the Board of Education with support for the appropriation which will allow for the safer, more environmentally friendly reusable trays.

Additionally, there will be another Board of Education meeting on June 13 at North Street School – they are hoping for lots of support.