At Thursday night’s Board of Education meeting at Julian Curtiss School, parents continued to demand a change to the food served in Greenwich Schools cafeterias, and to replace the styrofoam trays with a durable alternative that can be washed and re-used.

Toward that end, a Change.org petition was launched on Tuesday by parents including Stephanie Chawla, a physician assistant, who said she has been “appalled” at the food served to Greenwich students. By Sunday evening the petition had over 800 signatures.

“Food that’s full of bad fats, bad oils, processed sugars, artificial colors and flavorings (some that are banned in other countries) is contributing to childhood obesity, insulin resistance, elevated cholesterol, blood pressure etc,” Chawla said in an email on Friday.

At the Thursday BOE meeting, Lauren Rabin presented a Food Services Committee update. She said that at the last meeting, her committee came up with 5 action items.

The first is to consider more than one vendor for a pilot program. In addition to No Fuss Lunch, the committee has been talking to a company called Brigaid who seeks to act as a consultant to Greenwich’s food services team.

Rabin said Brigaid was founded by Dan Giusti, a graduate of the Culinary Institute of America who formerly served as the Head Chef of Noma in Copenhagen. Brigaid’s founders say that with increased government regulation and limited budgets, schools have lost their ability cook, resulting in processed, heat & serve operations. They provide schools the knowledge and tools to get cooking again. They assist in managing food services and have developed menus and recipes that can be used while staying on the National School Lunch Program.

Rabin said Brigaid’s proposal represents a reduction in their typical fee for per school and that they have offered to waive the fee entirely for one of three schools piloted.

2. The second action item was to create a financial model factoring in students who qualify for free or reduced lunch.

Rabin said her committee has started to look at the P&L for each school, and still need to allocate items such as longevity pay and benefits.

“We reaffirmed the alarming fact that we’re not feeding all of the children who qualify for free or reduced lunch,” Rabin said.

3. The third action item was to pilot against improvements the town could make on its own.

4. The fourth action item had to do with clarifying whether an RFP was required.

“In confirmation with our purchaser, we do not need an RFP unless we are spending more than $15,000,” Rabin said.

Rabin said a vendor such as No Fuss Lunch would come at no cost to the district; Brigaid would serve as a consultant.

5. The fifth action item is moving away from Styrofoam trays.

“New Lebanon School has the appropriate dishwasher, and we are pricing metal tray options to use this year,” Rabin said. “We are also pricing out what it would take to equip all our schools with dishwashers and we’d likely come to the board for an appropriation.”

Among the BOE members, there was unanimous expression of distaste for the Styrofoam trays, which cost the district $15,000 annually.

During the public hearing, Abbe Large, a parent who is part of the food services committee, said comments from BOE members saying they ate chips and cookies in high school was not helpful.

“Diminishing and dismissing this important issue as simply about cookies and chips is offensive to the hundreds of parents who are demanding change,” she said, adding that in just three days since the petition launched online, over 500 parents had signed.

“We need to feed the kids on free and reduced lunch. Have you looked at how our existing model is feeding them now?” she asked. “According data from food services, only 56% of the kids entitled to a free lunch are taking it. That means 44% are not.”

Large said No Fuss Lunch is passionate about how and what they feed children and existing workers would be retained.

According to the No Fuss Lunch website, they “make healthy school lunches that kids really like, with food that is safe for every child and that exceeds government standards. Unlike institutional school lunch providers, No Fuss Lunch includes a hot or cold entrée, fresh fruit, fresh vegetable, dip, treat and water with every all-inclusive lunch.”

They do not use white sugar, high-fructose corn syrup, nuts, GMO’s or MSG.

“The Town would benefit from having them rent our facilities,” Large said.

She said Brigaid is an alternate vendor with a passion for good food who would train existing Greenwich Schools food services staff and move on.

“It would be an investment into creating the right business model and training so existing infrastructure would succeed,” she said.

Ms. Large said an RFP is not required. “We have been talking about this for over a decade. …It’s not about dollars and cents, this is a moral issue.”

“Embrace volunteers who have spent countless hours to try to solve a problem,” she said. “This topic is effecting our students every single day.”

Julie DesChamps who is a member of the Greenwich Recycling Advisory Board (GRAB) and PTAC Green Schools Committee, created a display using a single day’s worth of foam trays used at Eastern Middle School.

DesChamps said the $15,000 spent on foam trays annually is literally thrown away. In fact she said, district-wide almost half a million foam trays are thrown away annually and are incinerated at a cost to tax payers and to the detriment of air and water quality.

“Reusable wares may cost more up front, but are designed for thousands of uses,” she said. “Food services has done a cost analysis of dishwashing systems across the district. The expenses would be $110,000, a fraction of other projects to safeguard student health.”

After Ms. Rabin summarized the five action items Mr Bernstein asked whether the $110,000 would include labor. Rabin said it did not.

However, on Friday Ms. DesChamps clarified the impact on labor using No Fuss Lunch and reusable wares with dishwashers in place of Styrofoam.

“At No Fuss Lunch, cleaning and sanitizing of reusable trays is completed by hand during and between shifts with specific tasks accomplished each 15 minute increment according to an algorithm,” DesChamps said in an email.  “It’s a more systematic approach that can mitigate the expenses of labor.” 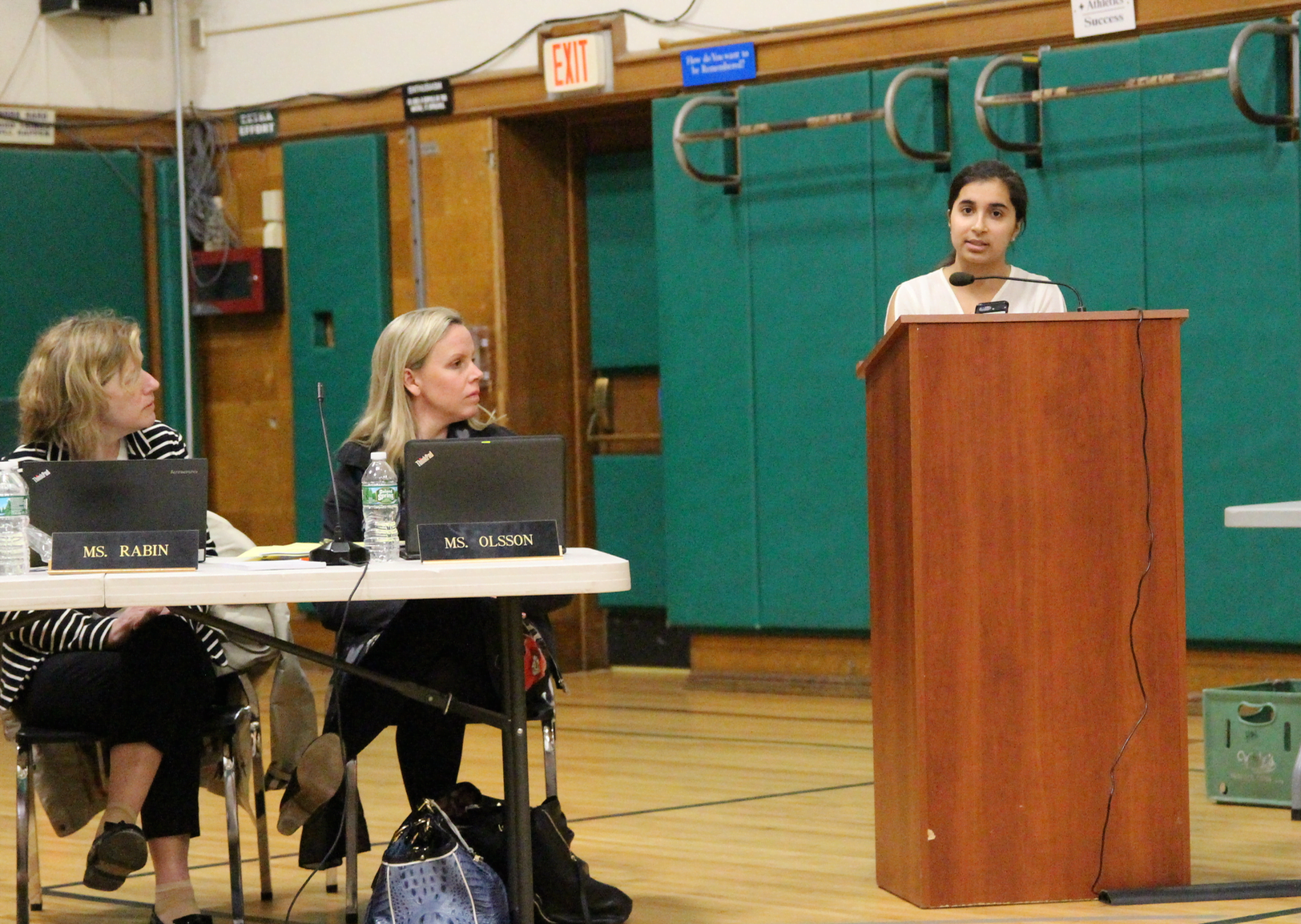 Lena Thakor, a 10th grader at Greenwich High School who is a member of the school’s Environmental Action Club, said she was deeply distressed that the schools use styrofoam trays in the cafeterias.

“Styrofoam is a petroleum-based product. Not only does the production process release copious amounts of greenhouse gases into the air, depleting the ozone. It takes at least 500 years for the product to break down.”

Lena said because of its inability to break down into smaller pieces it is frequently ingested by marine animals, often harming or killing them. She said polystyrene is consistently reported as one of the top ten items of debris recovered from shorelines and beaches worldwide.

The board members each commented on Rabin’s update. All were eager to move away from Styrofoam and looking forward to the school lunch pilot as an agenda item at the next meeting.

Peter Sherr, who had previously said an RFP was required for a pilot, said he hadn’t insisted on an RFP because it was a regulation, but rather because it would generate additional new ideas and information from multiple vendors.

“The speaker up there – it’s clear she was opposing it (a RFP). You know she found this vendor for us,” Sherr said. “I don’t want to do value judgement about that vendor, but I want to hear all the other ideas than this one company that has put together around their business model.”

“There’s lots of other vendors in this space,” he said. “I think we need a full-throated discussion about this.”