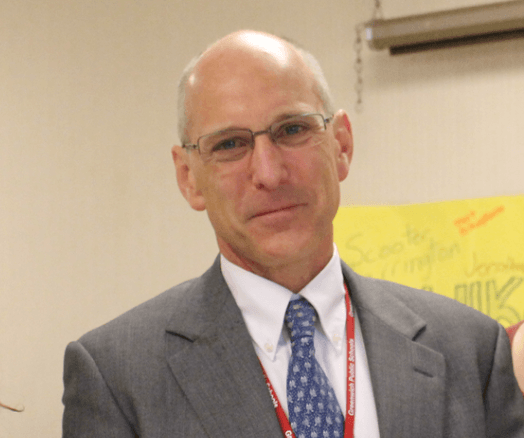 As the Headmaster of GHS, it is not my usual practice to express my perspective through the press on a topic currently under review. As I participate in discussions about a possible adjustment to high school start and end times, I believe this is a moment when bringing my views to the public is appropriate.

The Greenwich Public Schools made the change to start and end times this year for one primary reason: to improve the overall health and well-being of our students.

Having observed the changes in morning routines for GHS students and  staff, I am now in full agreement that our previous start time of 7:30 was too early. I accept the American Academy of Pediatrics (AAP) recommendation that adolescents should not start school before 8:30. I do not challenge the science.

I am writing to state the case for making small, commonsense adjustments that will allow us to benefit from the later start time and address some of the negative impacts of the change.

During the debates on bell times last year, rarely was there mention of end times.  We formed School Start Time committees. We sent out School Start Time surveys. Our BOE discussed school start times. The well intended focus on the beginning of the day now needs the same attention to the end of the day.

We have a strong and growing body of data that suggests we need an adjustment. The fall and winter athletic seasons showed how the 3:15 dismissal led to missed class time for athletes. Being the southernmost town in our conference, Greenwich is poorly situated for afternoon travel. To get our teams to away games we needed to dismiss them early from classes.  During the fall season, the total number of early releases increased by 147% (2016 – 36; 2017 – 89) and the total number of minutes of missed classes increased 233% (2016 – 1180 minutes; 2017 – 3930 minutes). When students miss all or most of a class, it disadvantages them and adds to the stress of acquiring the missed content and completing assigned homework.

What is the optimal dismissal time that will allow us to accomplish the after school programming expected of a high performing high school like ours? In my analysis, 2:45 is what we should be working toward.

As with any new initiative, we analyze the impact and if we are convinced that the overall direction is sound, which I believe it is, we make small adjustments to maximize the benefits and reduce the negative consequences.

One option keeps the school day the same length and moves the start time back by 30 minutes to 8:00. Another option is to maintain the current start and end times. If the first option strays too far from the recommended 8:30 start time and the second fails to ease the after school late dismissal challenges, there is a commonsense compromise: shorten the school day by 2½ minutes per instructional block (15 minutes total per day) and move the start time back to 8:15.

Unfortunately, with start and end times, it has become a zero-sum game. An 8:30 start time is a line in the sand for advocates. As one parent wrote, options are acceptable: “as long as school doesn’t start a minute earlier.”

Why does an adjustment that would likely be readily acceptable to most of our community find zero credence with start time advocates? I can speculate two possible reasons. For some, there is a personal experience, usually with a son or daughter, that led them to take this hard line–”not one minute before 8:30”–approach. I understand that. I also understand that start times are neither wholly the cause of suffering teens nor wholly the solution. For extreme cases, of which, unfortunately, we have more and more, we need solutions far outside the box than one-hour later start times. For the vast majority of students, a 15-minute earlier start will have no adverse effect on their health and, we hope, a 30-minute earlier dismissal will benefit them.

For some strong advocates, the refusal to consider a time “one minute earlier than 8:30” can only be attributed to a political agenda. Here again, their position is understandable. Parents have advocated for later start times for years and there is now movement in many districts throughout the country to shift times later. If Greenwich were to adjust 15 minutes off the 8:30 start time, it would send a signal to other districts that perhaps the “Start School Later” cause is not worth the expense and disruption.

As Headmaster, I am disappointed that efforts to find a compromise adjustment could be held up by a broader political agenda. All high schools should be looking at 8:30 as a preferred starting time. And, all school districts need to consider the local conditions that 1) get them as close to 8:30 as is practical, and 2) dismiss early enough to provide the full range of opportunities our students deserve. A small adjustment of 15 minutes earlier than our current start time and a 15 minute shorter day would make a big difference.

I have great faith in the Greenwich community to engage in respectful dialog and to make adjustments that will allow us to continue to gain from the later start time and run the full complement of after school programs.