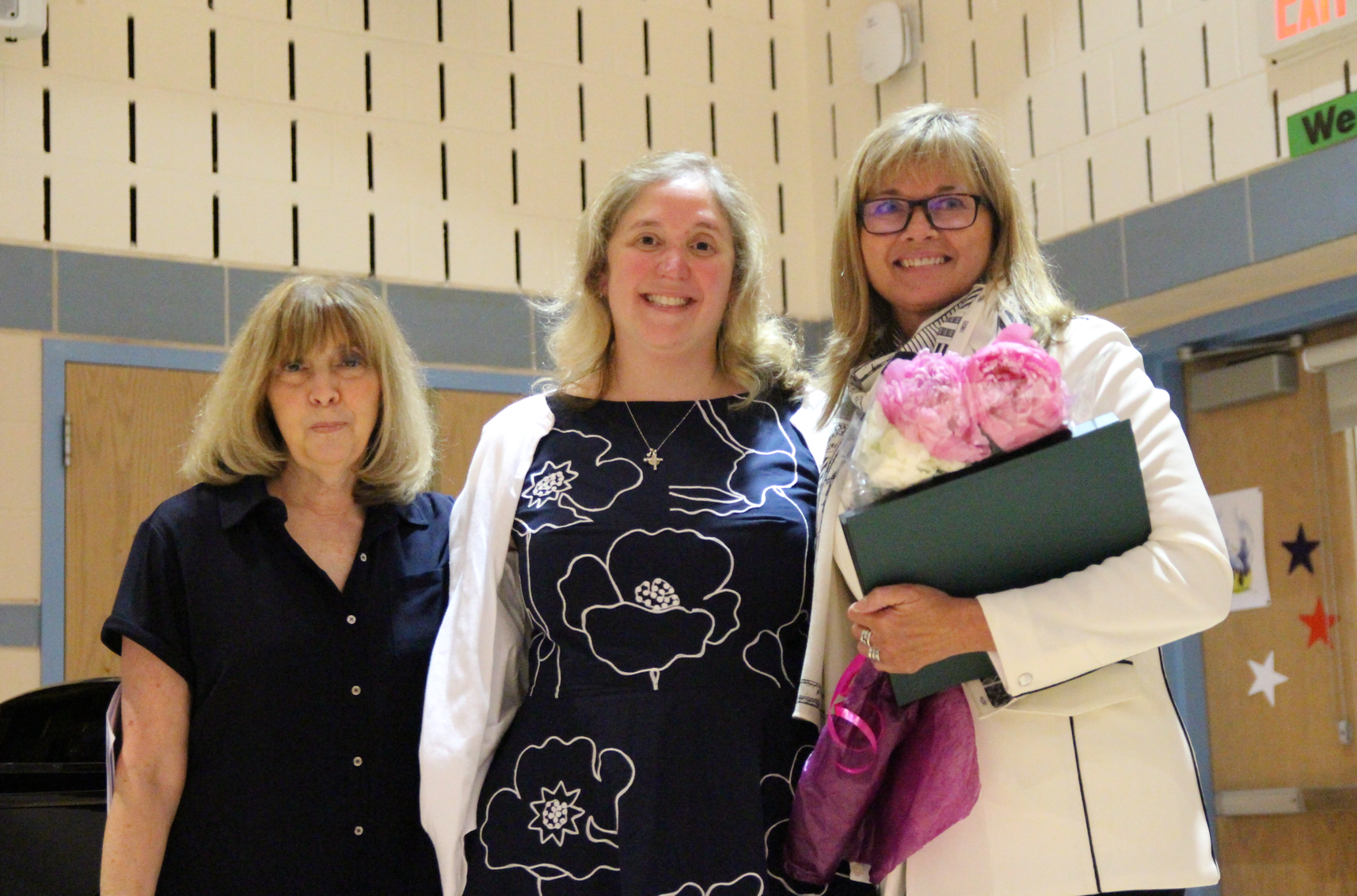 At Thursday’s Board of Education meeting, the last for the school year, there was an outpouring of appreciation for Kim Eves, the longtime district director of communications.

“The loss of Kim Eves will be felt for years to come because not only is she the voice of Greenwich Public Schools, she’s our historian, greatest advocate and dearest friend,” said Old Greenwich School Principal Jen Bencivengo, adding that Eves’ time in the district spanned 19 years and 15 superintendents.

“We shared many a laugh and quiet moments. More than once we both said you can’t make this stuff up – but she always picks up the phone, always has a solution for every problem and never turns you away  – even when the request is so small or not in her purview – she persists and supports,” Bencivengo said.

Karen Hirsh, outgoing PTAC president described Eves as “the heart and soul of the district and its historian.”

“You’ve never once lost your spirit or lost your cool,” she added.

Carol Sutton, the president of the GEA described Eves as respectful and professional. “We’re going to miss you! May the force with with you,” Sutton said.

“I want to thank you. I’ve been a Greenwich Schools parent for 15 years, which ends on Monday,” Chief said, referring to his son James, a member of the GHS class of 2019.

Reading the award, Chief said,  “I hereby commend Kimberly Eves for her dedicated service to the citizens of Greenwich, CT and with this place her name in the historical files as an honorary member of the Greenwich Police Dept command staff,” Heavey said, adding that he also awarded Eves the Chief’s Award of Excellence.

On behalf of the Board of Education, Jennifer Dayton wrote a poem to honor Ms Eves. The poem bears a resemblance to the familiar ‘Twas the night before Christmas:

All Greenwich students were asleep in their beds,
as visions of a snow day danced in their heads.
At mission control, Ms. Eves sound asleep,
was dreaming of surveys and secrets they keep.
When all of a sudden there arose such a clatter,
she sprang from her bed to see what was the matter.
And what to her wondering eyes should appear,
but two fire trucks and eight firemen in gear.
And then at her door a tall man so fit,
she knew in a minute must be Chief Kick.
“Ice on the roofs has melted,” he boomed,
“water has entered 15 schools and we’re doomed.”
“The Fire Police were first on the scene,
our response time fantastic-a sight to be seen!”
Kim ran to her phone and woke Mr Mayo.
She suggested a snow day to prepare for the demo.
“But a day missed from school,” Mr. Mayo declared,
“would be greeted with emails of a kind most unfair.”
He texted Chief Heavey who without delay,
texted “sledding looks fine. less traffic today!”
At mission control Ms. Eves then recorded,
a message so fast it beat Captain Kordick.
She skillfully crafted eight ways to deliver
on voicemail on email on text and on beeper,
on website and pigeon and Facebook and Twitter,
And then opened her window, in the last hour of night,
shouting “Happy Snow Day to All!”
“It Will Soon Be All Right!”