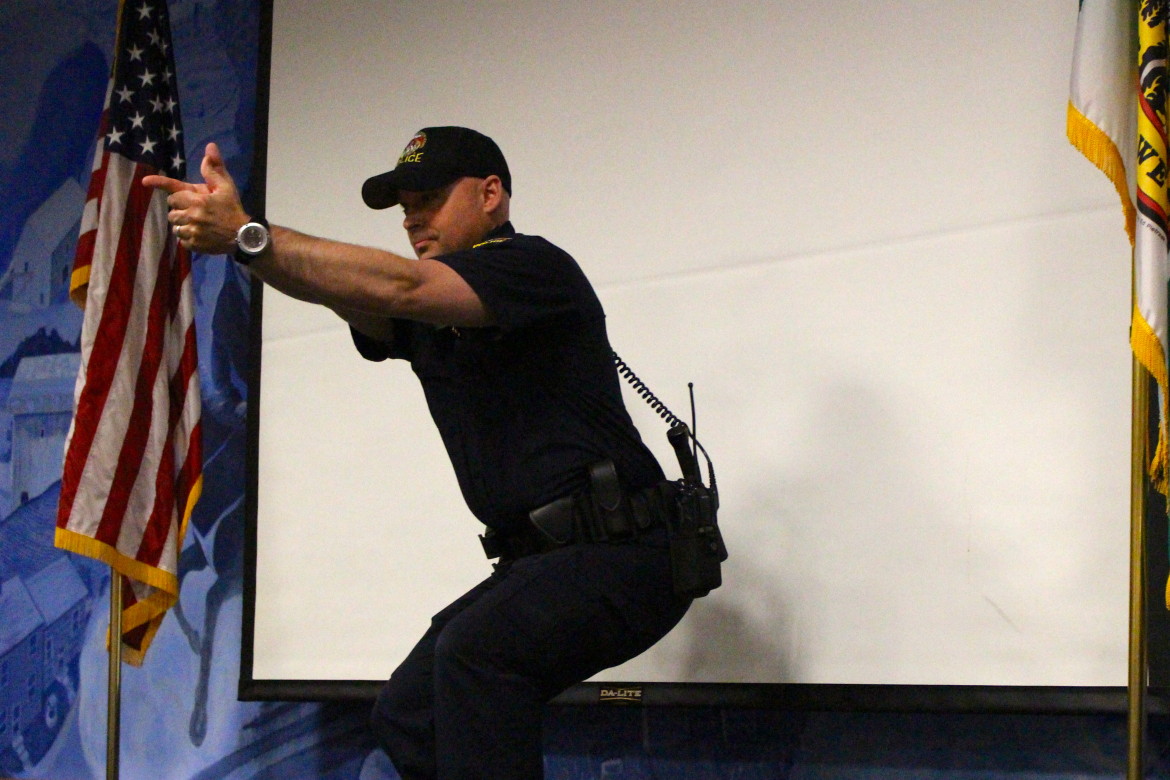 By Leslie Yager
On Wednesday afternoon, Greenwich Town Hall teemed with men in uniform, and a few women. Set to music, the ‘models’ shared the runway in what was billed as a “Uniform Fashion Show.”

The audience, comprised of 200 older adults, age 55+, learned how to authenticate the identity of members of the police and fire department, but also employees of utility companies, and even employees of the US Postal Service, UPS or Orkin. 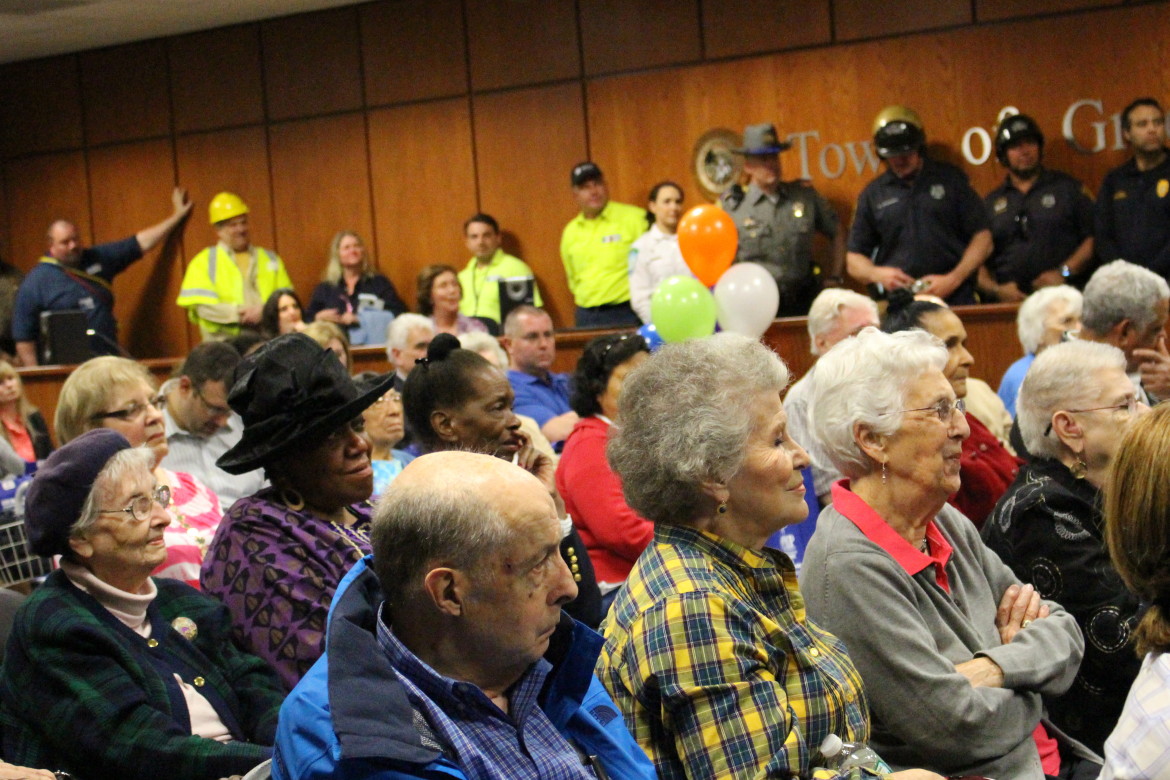 Standing in for Greenwich’s Chief Heavey, emcee of the uniform fashion show, Fairfield Police Chief MacNamara advised against giving money over the phone to charities. “You seek out a proper place to give it. Do a little research. Ask friends. Iit’s hard to sort through those people that are going to sound so good on the phone.” Credit: Leslie Yager

Greenwich Police Detective Mark Solomon admitted that he had been victimized himself after using his card at stores where there was a “network intrusion,” not unlike the one at Target Stores.

Solomon said in the past five years 43 arrests had been made involving victims, suspects or businesses targeted in Greenwich, with a total of $47.8 million of fraud loss or attempted fraud loss. 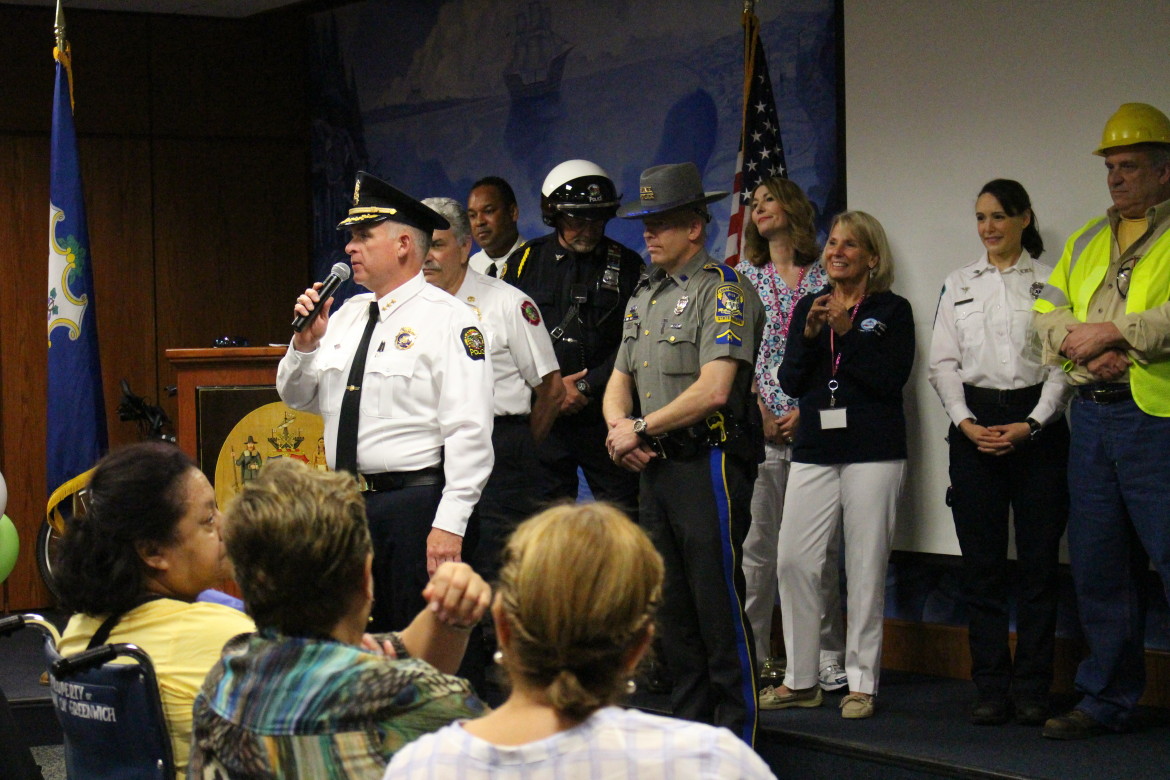 Solomon gave the example of mail being stolen from back country mailboxes. After a resident notified the police that mail was being stolen over a 4 or 5-day period, detectives set up a surveillance and apprehended five individuals. “The arrest was the result of a resident’s tip,” Solomon said.

Empowered with the Option of Hanging Up the Phone
Fairfield Police Chief Gary MacNamara, who stood in for Greenwich Police Chief Heavey as emcee for part of the event, recalled investigationg a report of harassing phone calls back before caller-ID was invented.

He described transcribing the victim’s conversation as she recited the phone call. After taking three pages of notes he asked her, “Why did you keep talking to him?” MacNamara reminded citizens that, simple as it sounds, they have the power to hang up the phone.

“Nobody is coming to call you to say I have free money for you,” MacNamara added of phone calls and emails. “It’s a scam. They’re using you. If you are confused or scared, take a pause and call somebody.” – Fairfield Police Chief Gary MacNamara 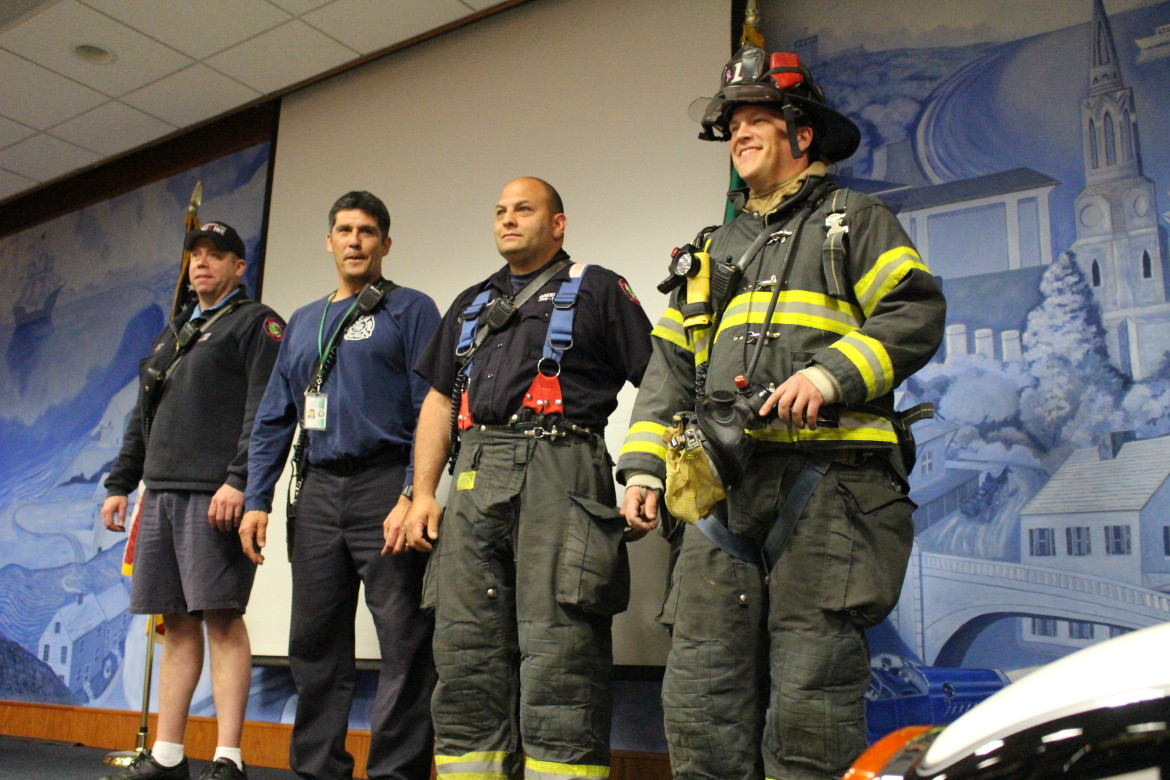 “If you take a really steamy shower, or burn food and the smoke detector goes off, we may show up. If you lock your self out of your car, that’s part of the emergency services that would have us come out to your house,” said a Greenwich firefighter. “If someone from the fire dept comes unannounced, you can call 911. Look for their identity, their uniform and a fire truck.” Greenwich Fire Marshal Shawn McDonnell said, “By state statute we’re required to inspect multi-family units and apartment buildings once a year for proper exiting and proper safety features. I normally make an appointment first but we might knock on the door.” Credit: Leslie Yager

Greenwich Police Officer Keith Hirsch said that sometimes police will come to a resident’s house unannounced. Occasionally, he said, they have to  make a death notification in person. credit Leslie Yager 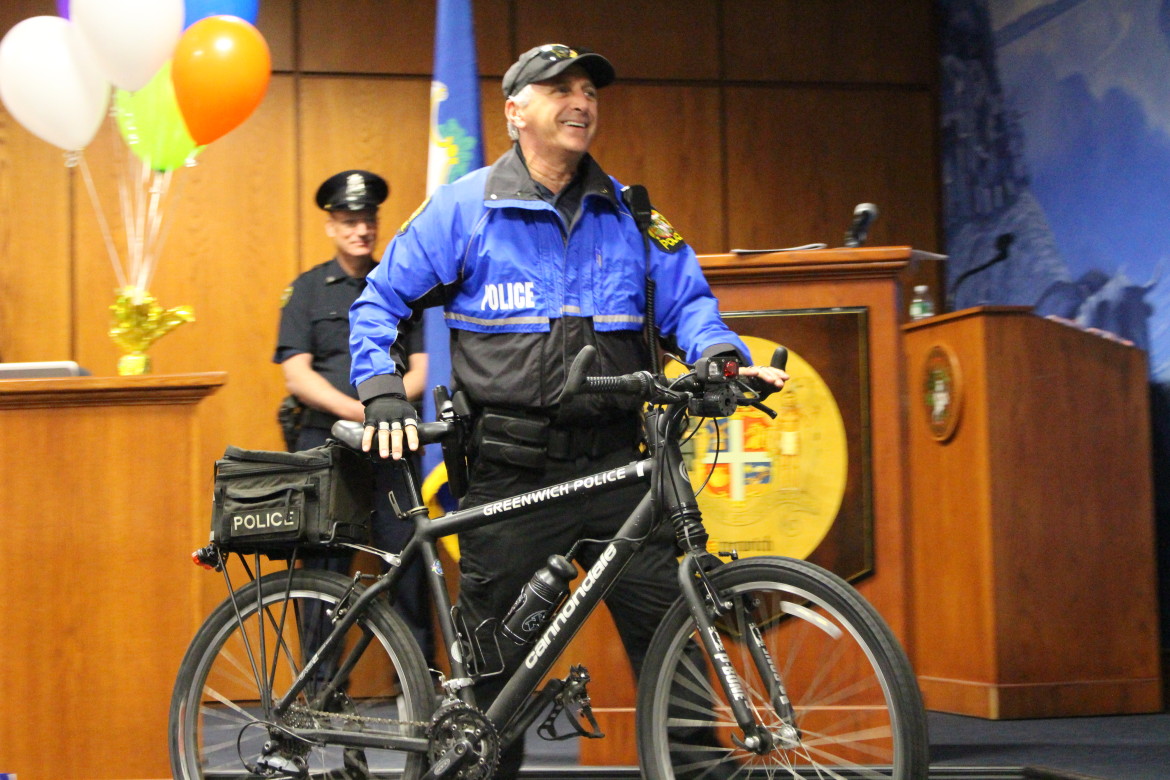 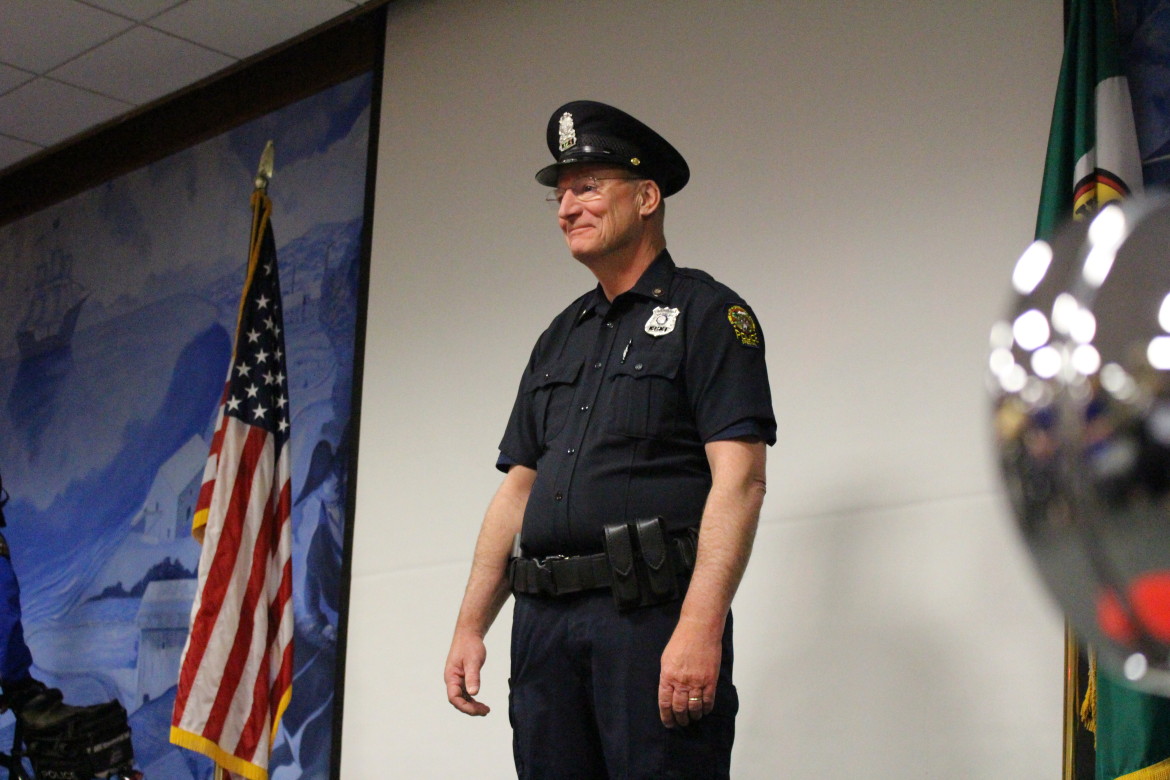 Robert Williams, who retired after 27 years, belongs to the special division, which he said supports the regular police dept at parades, fireworks and other large events. The ‘specials’ normally ride along with an officer in the patrol car. Credit: Leslie Yager 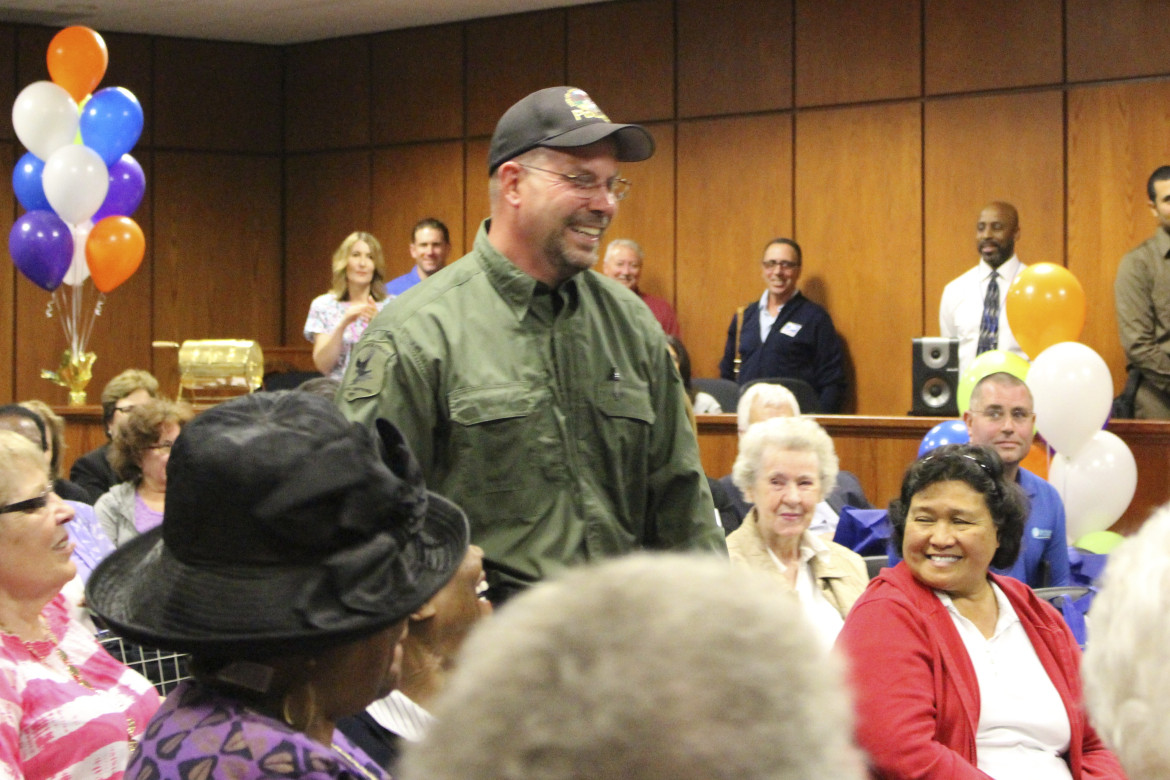 Sgt. John Thorme, dressed in a green “tactical” or SWAT team uniform. “I don’t make appointments with my tactical team, we wake you up,” Thorme said. If I come to your house and you see me, it’s too late. If you see us at your neighbor’s house, stay inside.” Credit: Leslie Yager 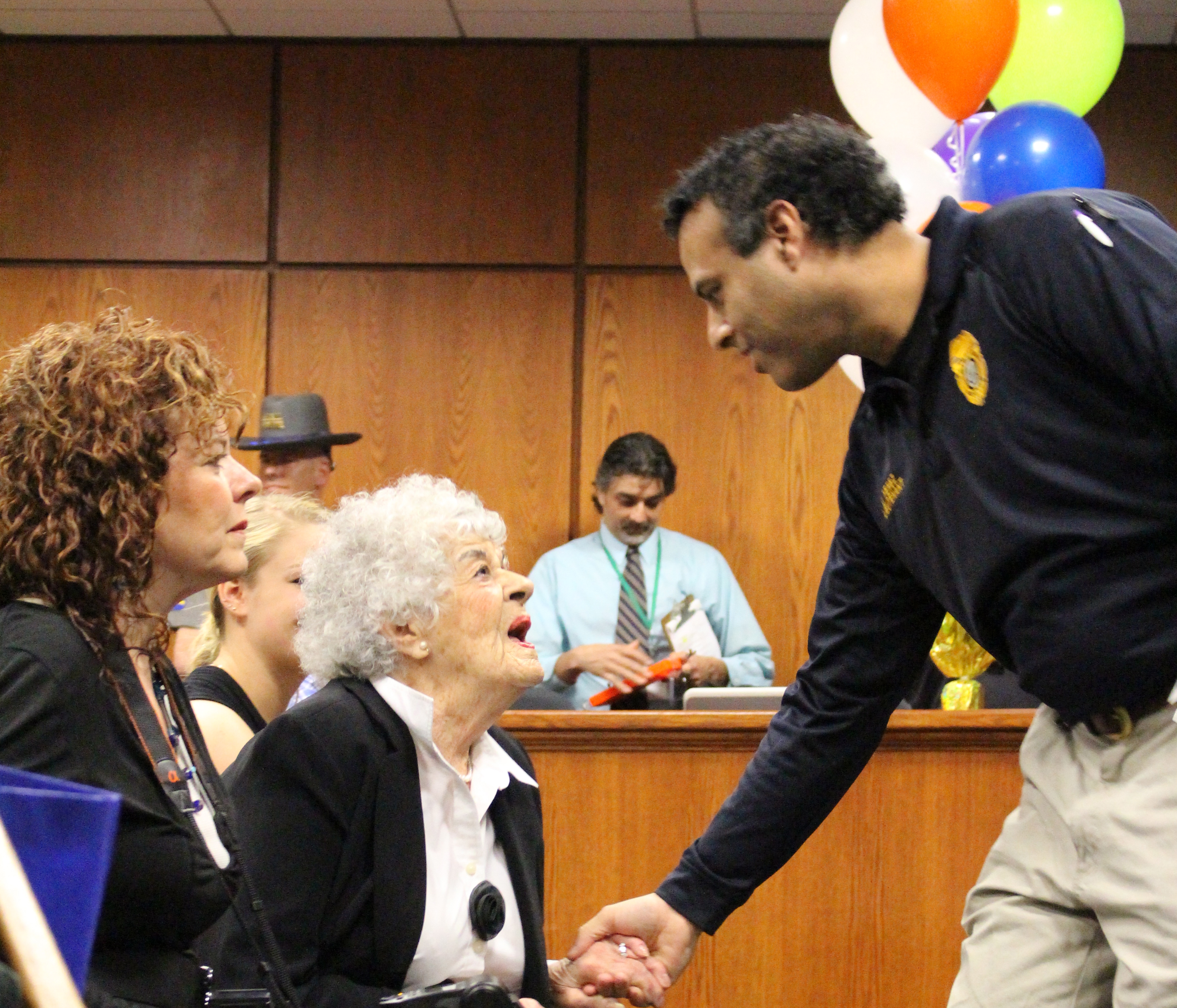 “The level of services that you will get from your police and fire departments and all kinds public services is equal to the amount of interest you actually take in being part of the community,” said Lt. Perez of Fairfield Police Dept. “The goal should be to be a small target, so that no one comes out to scam or target us.” Perez modeled what he’d wear in a neighborhood watch or community meeting. “Or our school staff would wear this. It’s less intimidating, more inviting,” Credit: Leslie Yager 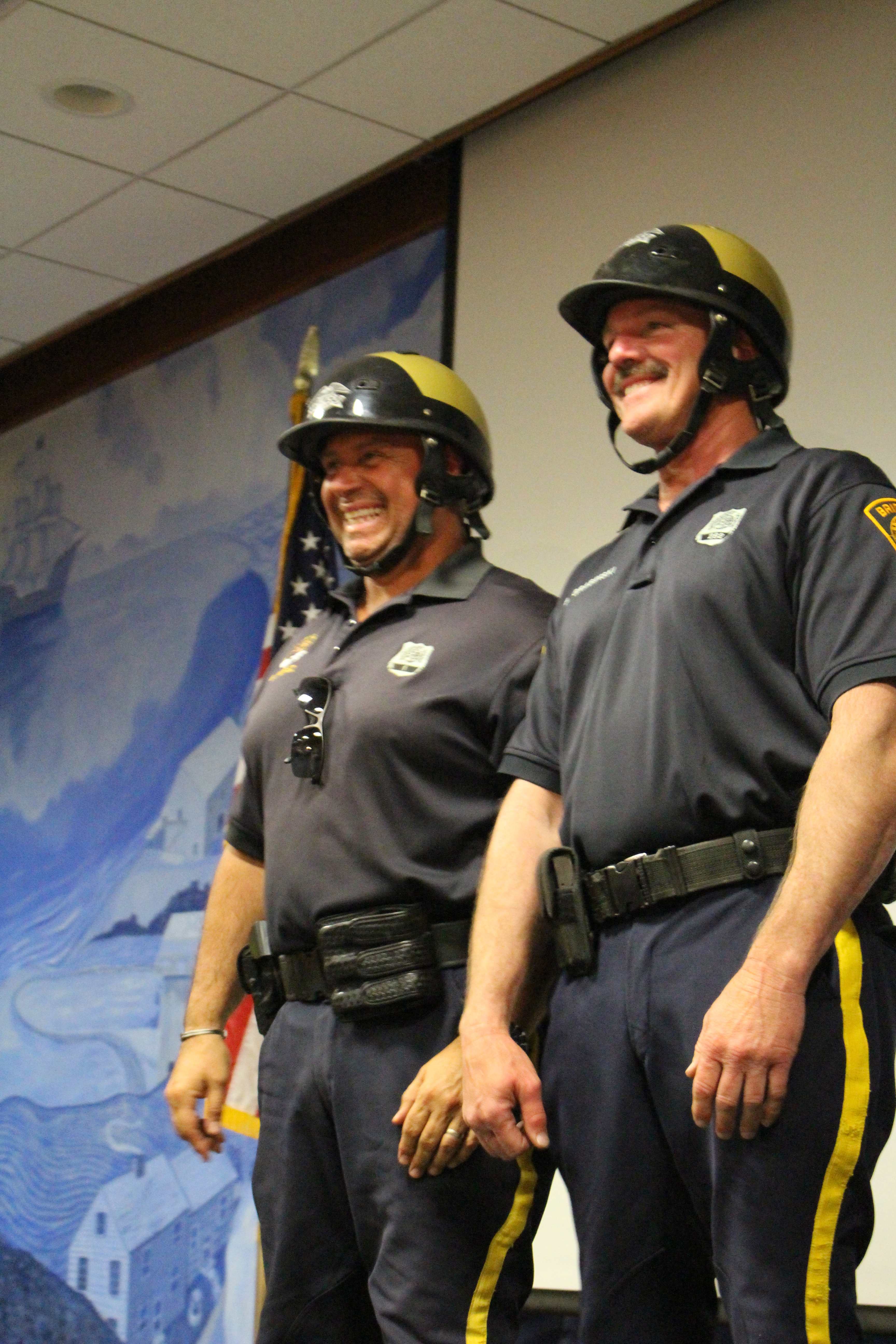 Members of the Bridgeport Police Dept. Mounted Unit. “Our uniforms look like the motorcycle officer, except we have spurs on our boots,” said the mounted police officers. Of a scenario that might have them knock on a resident’s door, the officers said that was not likely, joking, “If we come to your house it’s to fertilize your lawn.”  Credit: Leslie Yager 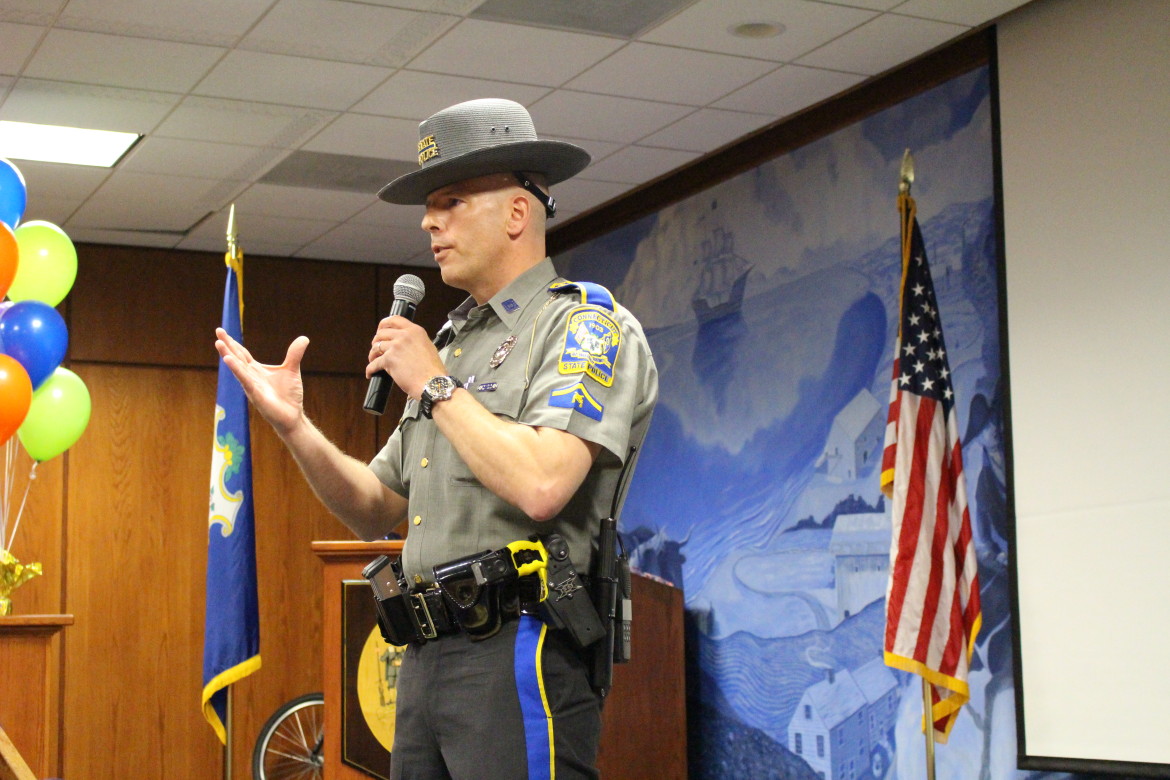 State Trooper Greg Lebeau from Troop G in Bridgeport said, “My job is the same (as a local police department) but a different employer – the State of Connecticut, and our patrol areas are all of your major highways in lower Fairfield County.”  “If I come to your house it’s a death notification for a loved one, or investigation of an accident on the highway,” he said. “We don’t take credit cards over the phone if you have to bond someone out. You’ll never be asked by state police to send money to a location over the phone. You’re physically going to have to show up at police barracks.” Credit: Leslie Yager