At the April Board of Education regular meeting, several parents and students spoke out in favor of changing school start times, with a priority of delaying the GHS start time.

Donna Praiss, who appeared with her pajama-clad middle school daughter Elisa Pey at the microphone, said she is also  parent of a high schooler and two who already graduated GHS (class of 2012 and 2014). Praiss argued that the existing bell times have a high cost to families.

“My children were high performers but were impaired by lack of sleep. They suffered migraines which started sophomore year. Junior year was particularly challenging…There are costs involved with not changing the start times. Particularly for me, it was physicians, pharmaceuticals,” Praiss said, adding that GHS implemented a strict attendance policy when her older children were at GHS. “My one daughter got a concussion rushing to the bus early in the morning as a sophomore. She never really recovered. She went to the tutoring program in order to get through.”

Praiss said she was troubled that the only zero cost option is the baseline option, which is the existing schedule. She said that if the entire system shifted an hour later, that would also be a no-cost option. 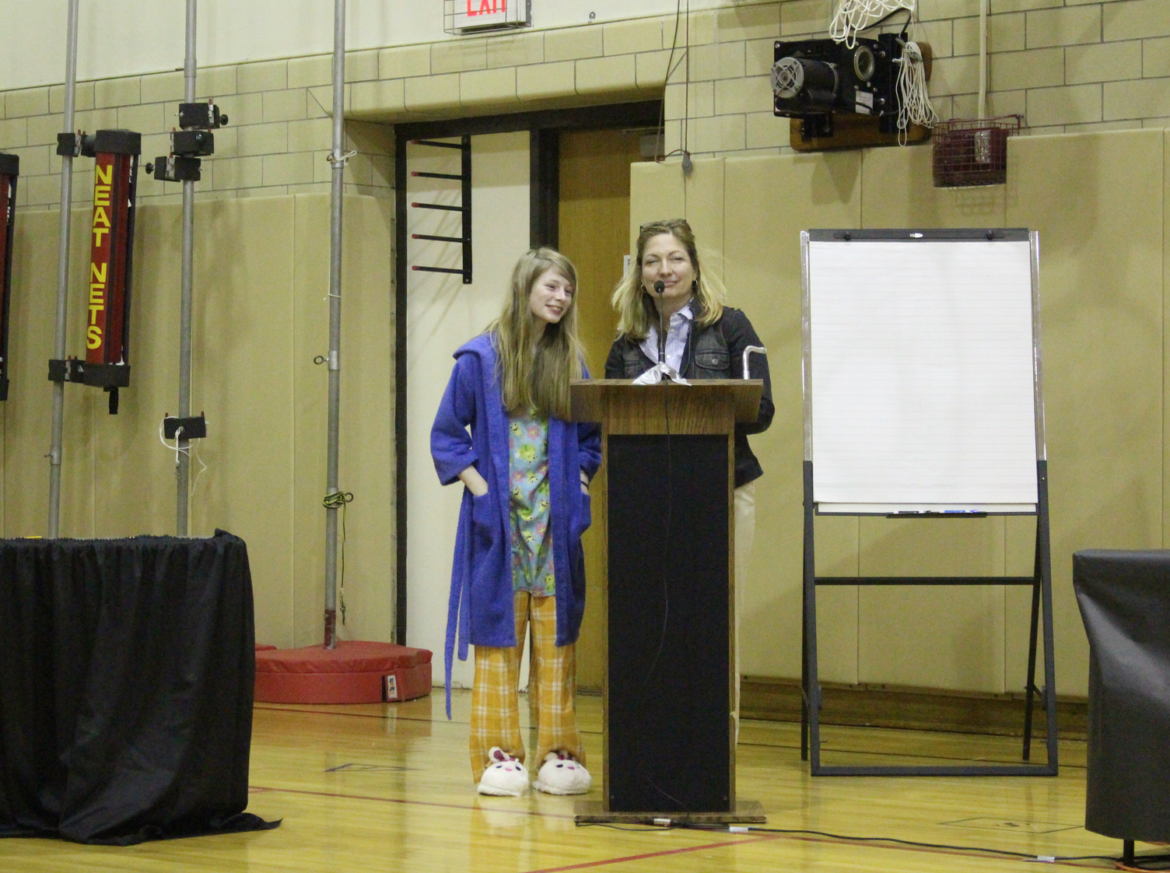 Superintendent McKersie said that of the 7,000 surveys that went out, 2,000 responses were received after just 48 hours. “We’re getting a lot of feedback, which I appreciate,” he said. He said that parents should know that if they get an email from Cynthia Womak, they should open it because she is working on the school start time project.

McKersie said in addition to the surveys, there is opportunity for online commentary on the Greenwich Schools website. He will make his recommendation at the May 12 Board of Education meeting.

Sutton said 100 teachers came together at GHS to discuss whether, for whom, and how much to change school hours.

“In addition to voicing understandable concerns about the impact a that change might have on their work life, their family routines and their commutes, it was striking how many comments focused on how the change would impact the students in their classes, and their families,” Sutton said.

During the public hearing portion of the meeting, several parents and students spoke in favor of the change in school start times.

Carolyn Wiener described her 9th graders as distracted and short-tempered. “If you put them to bed at 10 o’clock at night, they are are lying there wide awake at 11pm. Their biology simply does not allow them to get to sleep earlier. The only way they can get any more sleep and be better rested is if the school day starts at a later time.”

Wiener said she was grateful her sons aren’t yet old enough to drive. “If you start school later in 2017, they probably will never be driving in this kind of condition, and if it goes another year, they will be. It’s a frightening thought.”

Lastly Wiener said she did not understand why changing the GHS start time would necessarily impact start times of grade school and middle school. “I’m sure there is a way to start Greenwich High School later without disrupting the schedules of the elementary and middle school kids…. the high school kids just need more sleep and it’s not a healthy situation for them at present.” 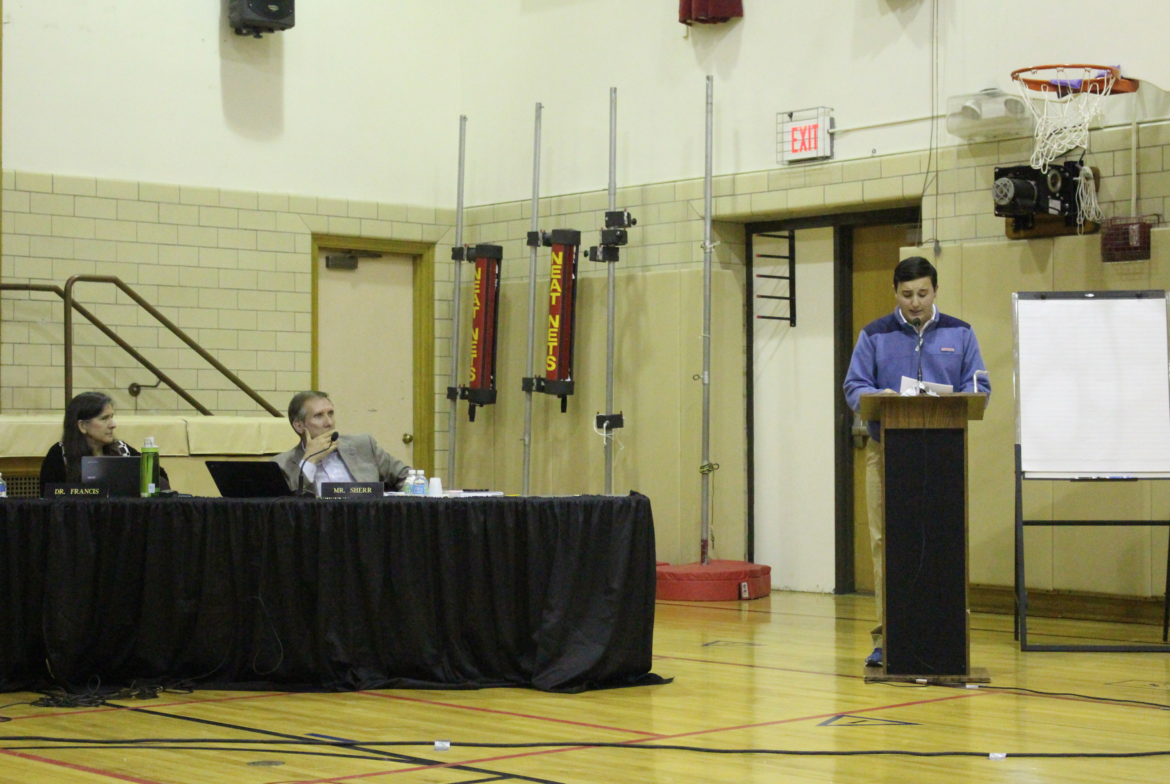 GHS freshman Chris Fiore quoted results of a study by Dr. Kyla Wahlstrom of University Minnesota, who reviewed seven high schools in Minneapolis whee start time changed from 7:15 to 8:40 am. Fiore noted that Wahlstrom found an improvement in attendance, enrollment rates and increase in daytime alertness and decreased levels depression.

“I believe this study provides important information, given that school stress at GHS is rated by students as a 10, with 10 being worse,” Fiore said. “If we have the power to reduce this statistic, then we need to take any action necessary.”

Fiore said working parents should have nothing to worry about because there are before school activities that could fill the void.

“Sometimes it seems that because Greenwich High School has such strong sports teams, we forget the original purpose of learning is academics,” Fiore said. “Regardless of the fact that sports can teach you teamwork and discipline, academics must be the priority.”

David Condon said he is the parent of a 10th and 4th grader.

“I think there is a big difference between an adolescent and a teenager,” he said. “Teenagers typically stay up until 11:00pm or 11:30, which is why they can use the extra hour in the morning… If you have a 4th grader, he’ll go to bed and wake up early. Based on my experience, smaller children have a better time of getting up early.”

Condon said there will always be a contingent that will be unhappy with any change.

“Any option that the board will take, not everyone will be happy. The most important thing is the actual students at Greenwich High School, and what’s best for them – not for the athletic person, not for the person in orchestra,” he said. “Let’s concentrate on what really allows the student to excel. When you’re in high school, all your grades count for college. It is so competitive. Let’s give them a fighting chance. The way I see that happening is to give them the extra hour of sleep in the morning.”

Margaret Mooney, a 7th grader at Eastern Middle School advocated for option 7, which she described as the most cost effective, requiring only $180,000 more annually and the lowest additional school buses. “Greenwich Public Schools would dodge a serious bullet if they went with the more frugal option,” she said, adding that has GHS ending at 4:20pm. “Having later classes would allow GHS students to be fully engaged. She said that by giving GHS students an extra hour-15 minutes to sleep, they could be held to a higher standard. She said option seven staggers pick up and drop off at different levels. Lastly she said the extra time would allow time for breakfast and mentally preparing for the day ahead. 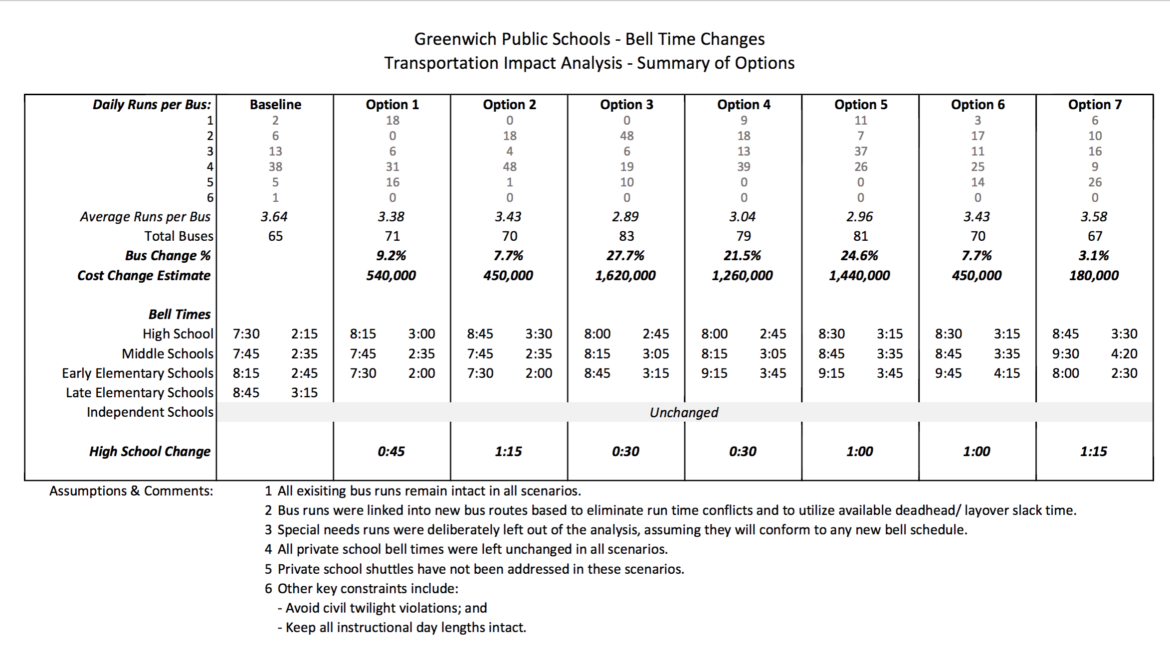 Week of April 18, a Survey on school start times is being completed by Greenwich Schools families, in addition to staff. It was sent to 7,000 families. A student version of the survey will go to middle school and high school students.

A second set of Community Engagement Sessions, “The second pass” will provide the public another chance to discuss Dr. McKersie’s recommendation and the plans for implementing changes to bell times, if applicable.

Reader Letter: When is having an opinion on School Start Time a conflict of interest?