In August 2 the Greenwich Planning & Zoning commission approved the subdivision of 50 Lockwood Ave, where the historic Lockwood House dating back to 1875 stands.

The approval means two lots of .3522 acres each will be created in addition to 15% open space preserved.

Subsequently the historic Lockwood House, built in 1875, will be demolished.

A comment on the GFP website regarding the pending demolition of Lockwood House by Diane Doepke Voigt described the loss of the historic home as heartbreaking.

“My parents purchased this beautiful house in 1960 and lovingly cared for and maintained it for over thirteen years,” Doepke Voigt wrote. “People always admired the house and our family felt privileged to be stewards of the house and property, as did the owners after my parents.”

“It is a travesty that the house, has fallen into disrepair and overgrowth from neglect in recent years,” she continued. “A little TLC would have gone a long way toward keeping this home desirable to a prospective buyer. Even so, it is not beyond repair or renovation.”

Stephen Bishop of the Historic District Commission said the lot was big enough to have been split into three lots and retain the historic home.

“I understand he (the owner) had an attorney who would have bought the property for the full asking price of $3.3 million and restored it…It all happened too late,” he said. “They already had a buyer and a contract. P&Z didn’t bring it to my attention in time. There are a lot of 50s, 60s and 70s houses around. Why do they destroy our history?” he asked.

Attorney Thomas Heagney, who represented Robert Stone, the owner of 50 Lockwood, said at the July P&Z meeting, “This is the reality of the market as it exists. New houses sell quickly, old houses take longer.” 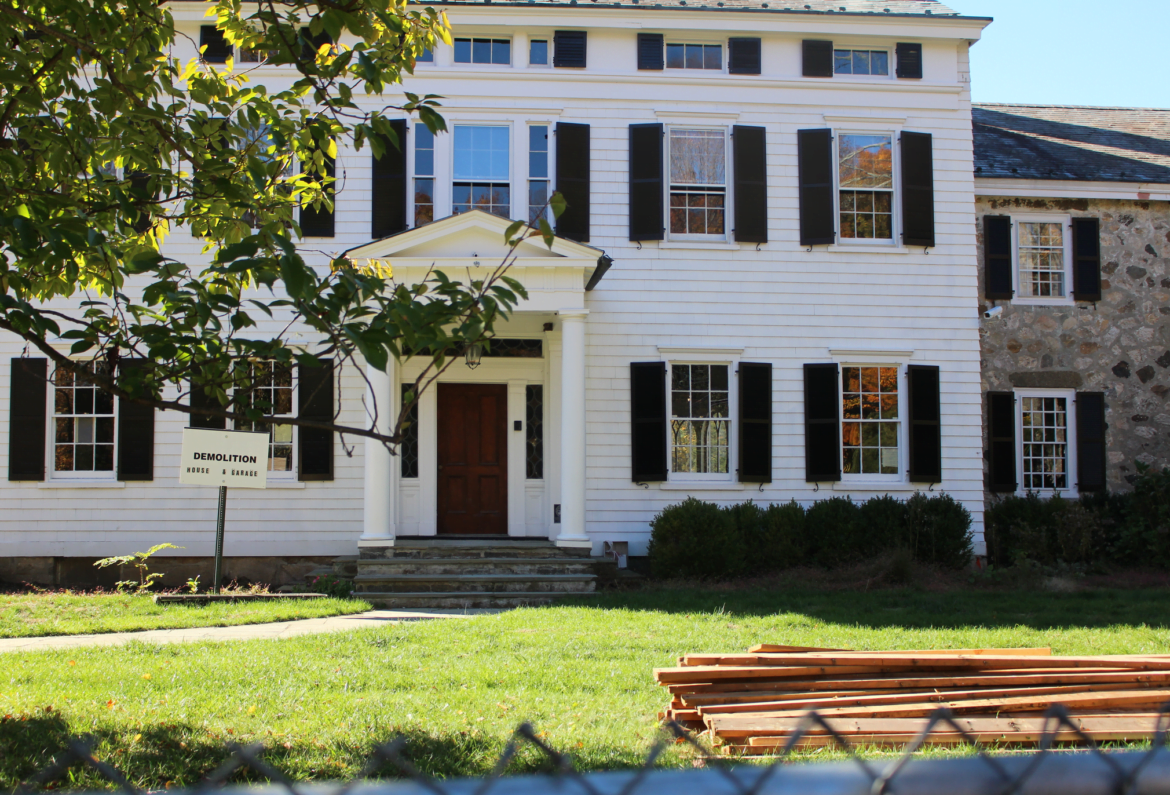 Mr. Bishop said that Hobby Horse Farm at 56 Clapboard Ridge Rd, which dates back to 1840, is also soon to be torn down, despite a valiant effort of the Greenwich Preservation Trust, Historic District Commission and Planning & Zoning to come up with a compromise with the owners.

The home had been renovated extensively by previous owners, Lisa and Mark Jennings, before the current owners purchased it in the summer of 2015 for $8,750,000, according to the Assessor’s office at Greenwich Town Hall.

In December 2015 Mrs. Jennings described feeling stunned to learn the buyers of the home that she painstakingly restored over the course of many years, and at great expense, would fathom demolishing it.

The inside of the Benjamin Reynolds House is extraordinary, according to Mrs. Jennings, who said that she and her husband removed a poorly constructed addition at the back of the house and created a more appropriate addition. She said the stone portion of the home was added in 1920.

“It was ready for the next 100 years,” Jennings said. “I don’t think they even cooked a single meal in the kitchen.”

In January 2016, Paul Pugliesi of the Greenwich Preservation Trust was hopeful that the owners would agree move the historic house at their expense and place a preservation easement on it if the neighbors who benefit from a deed restriction would consider lifting the subdivision restriction on this property for historic preservation purposes only.

The house, a plaqued historical landmark, was built in the Greek Revival style and originally was situated on 150 acres that were purchased by Benjamin in 1838 from his brother Jared for $5,000.

On Tuesday, Nov 1 the application from Meadowlark Manor LLC, owned by Ray and Lydia Bartoszek, will come before the Planning & Zoning commission for final site plan and special permit to construct a single family home, pool, new septic system, modifications to the driveway the result of which would be over the 150,000 cubic feet building volume threshold on the property located at 56 Clapboard Ridge Road.

Mr. and Mrs. Bartoszek are co-founders of RLB Holdings, LLC, an investment firm founded in 2011 with a mailing address of 343 Greenwich Ave. Mr. Bartoszek currently serves on the Board of Trustees of the Whitby School.

Next for the Wrecking Ball in Greenwich: Lockwood House, circa 1875

Next for the Wrecking Ball in Greenwich: 60 Lockwood Rd

Next for the Wrecking Ball in Greenwich: 1927 Sound Beach Ave Stone and Clapboard House